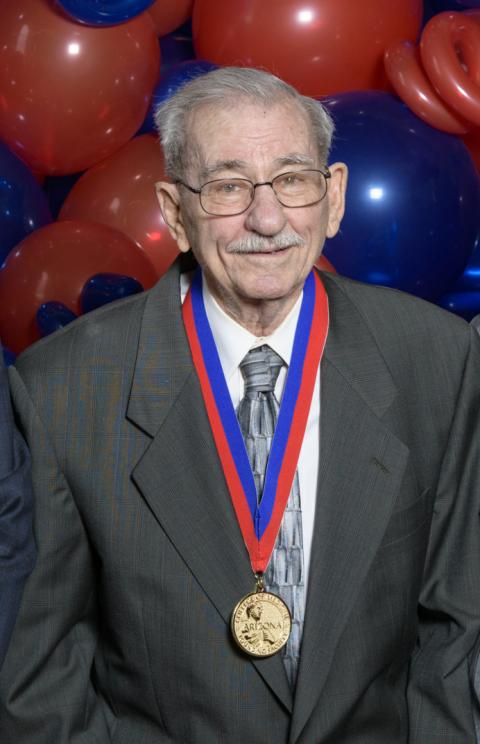 Philip E Dew, MD, a member of the founding faculty at the University of Arizona College of Medicine – Tucson, died peacefully on Feb. 2.

Born October 12, 1925, in Martins Ferry, Ohio, he was the son of Paul and Madge Dew. He received BS and MD degrees from Western Reserve University in Cleveland, Ohio, where he was selected to the Phi Beta Kappa honorary and served as chapter president of the Phi Gamma Delta social fraternity, from which he recently received their Diamond Owl Award for 75 years of membership. Dr. Dew volunteered for the U.S. Army during WWII, serving as an X-Ray technician in the South Pacific, rising to the rank of Technical Sergeant (T/4).

In July 1955, following three years of Pediatric Internship and Residency, Dr. Dew moved to Tucson and was one of the founders of the Thomas-Davis Clinic, becoming the eighth Pediatrician in Pima County. In 1970, Dr. Dew joined the medical school as and adjunct professor in the Department of Pediatrics. Dr. Dew volunteered in Tucson with the Family Service Agency, serving as President in 1961. He was lead in the Oral Polio Vaccination program in southern Arizona in the early 1960's and served as President of the Arizona Medical Association from 1973 to 1974, and President of the American Group Practice Association from 1990 to 1991.

Dr. Dew was predeceased by  his wife of 44 years, Jean and is survived by his sister Martha Saylor of Lemon Grove, California, his wife of 25 years, Ruth Ann, his sons David of Tucson, Thomas of Oro Valley, and James (Mimi) of Scottsdale, grandsons Brian and Taylor, and numerous nieces and nephews and their descendants.

In lieu of flowers, the family requests donations to the Dew Excellence in Primary Care fund at the University of Arizona College of Medicine – Tucson. The award is given to a graduating medical student with a desire to pursue a career in Pediatrics. Checks should be made payable to “UAF Foundation” and indicate Dew Excellence in Primary Careor Fund #40-10-0125 in the memo field and sent to PO Box 210109, Tucson, AZ.