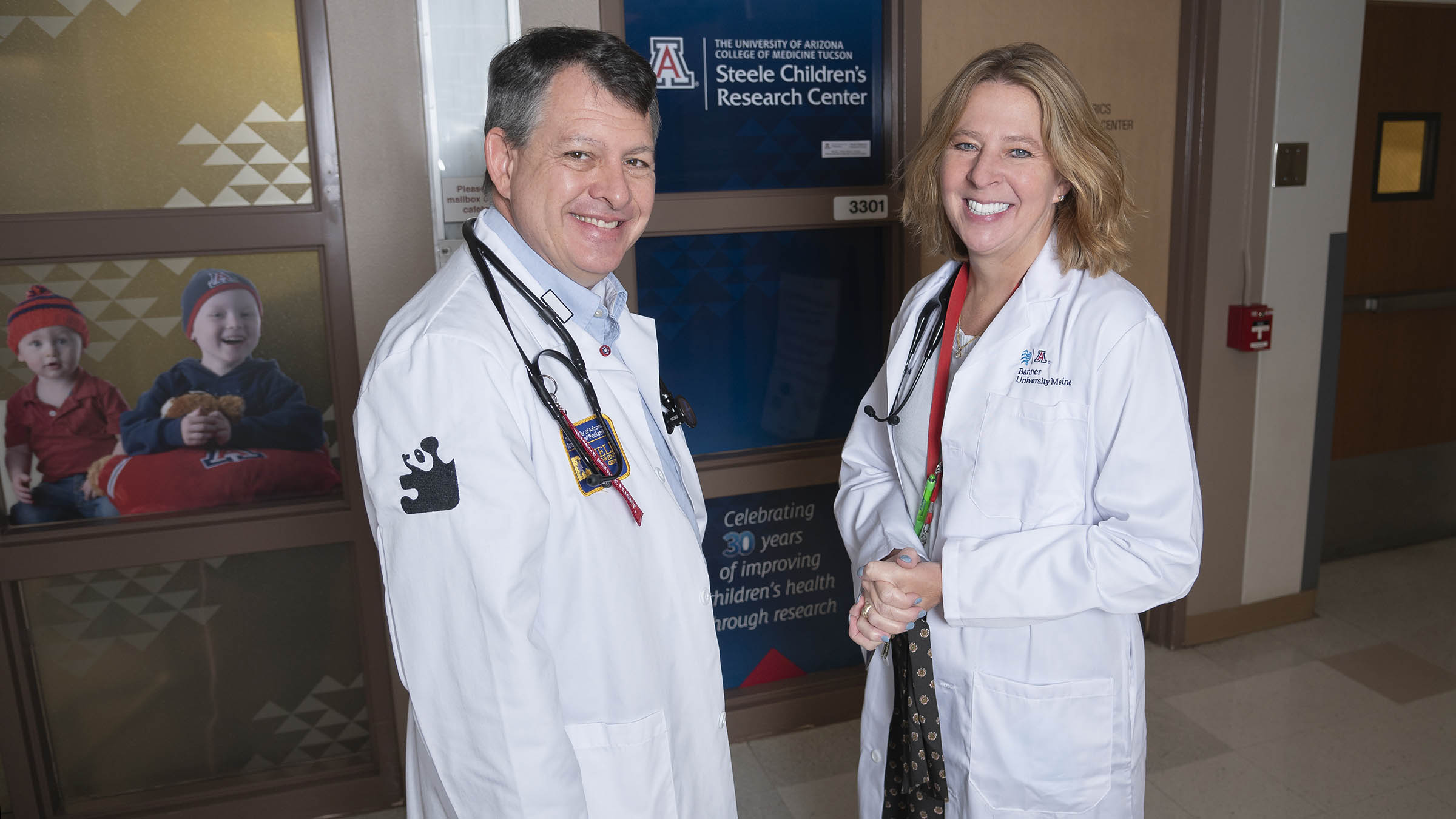 Michael Daines, MD, and Cori Daines, MD, outside the Steele Children’s Research Center, where the husband and wife have made their careers as pediatric physician-scientists since 2007.

Michael Daines, MD, and Cori Daines, MD, husband-and-wife pediatric physicians and researchers, tie their personal and professional success to the University of Arizona Steele Children’s Research Center, which is celebrating 30 years in its current location this fall. 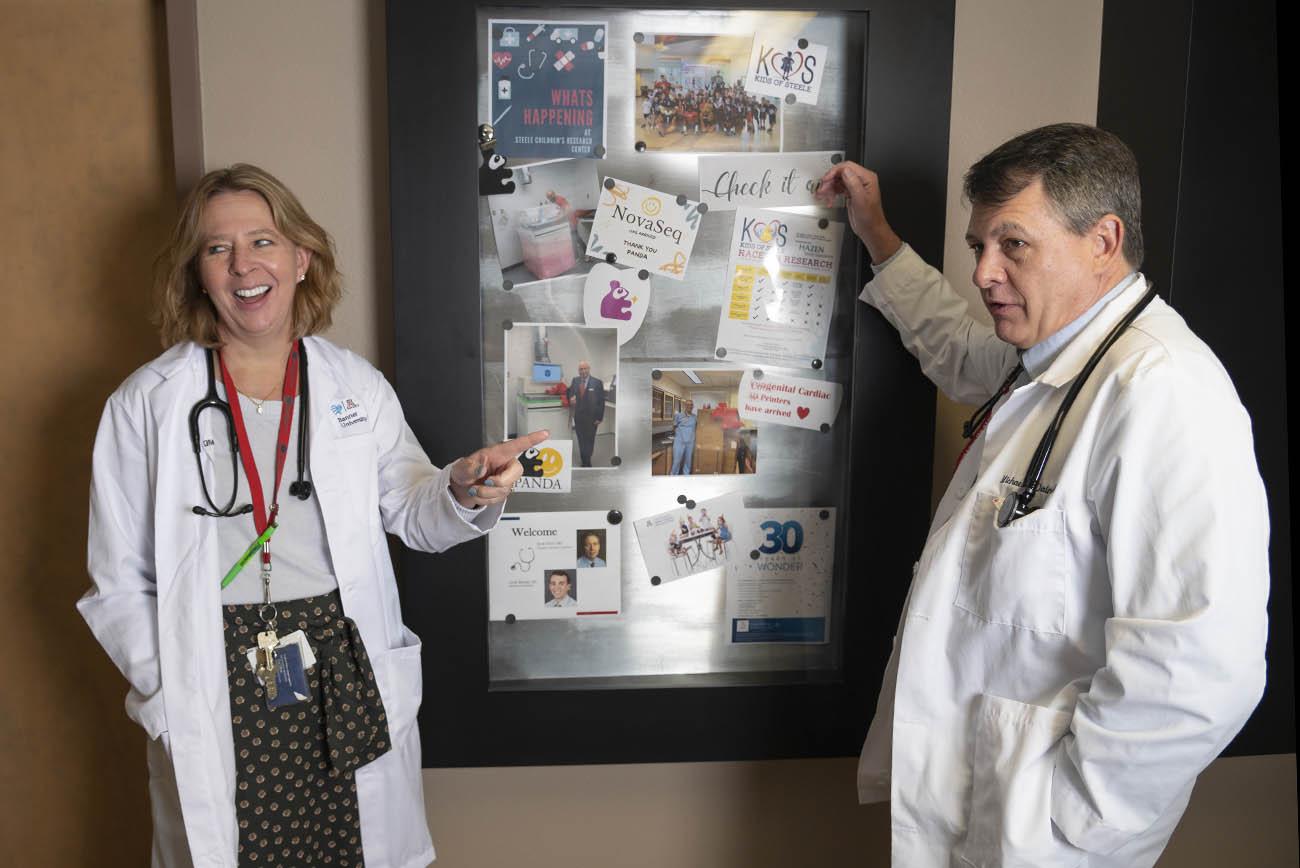 The Steele Center is the research arm of the Department of Pediatrics at the UArizona College of Medicine – Tucson. Much of its funding comes from the Steele Foundation and the center’s Phoenix Women’s Board, People Acting Now Discover Answers, better known as PANDA.

The Arizona Board of Regents approved the Children’s Research Center in 1986, the advisory board was created in 1987 and the building was completed in 1992. The Daineses arrived in 2007.

While the Daineses’ professional careers have many things in common, the doctors are proof that opposites attract, at least when it comes to love. A personality trait survey they did during a residency training retreat pegged them at polar extremes.

“Right there, on either side, there was one person at minus 13 and one at plus 11. Those were the two of us. The person who did the survey said, ‘I don’t know how these two people are married to each other.’ She just kept saying this over and over again,” Dr. Cori Daines said.

“I’m the organizer,” she added with a smile.

“I just enjoy being in an organized world,” Dr. Mike Daines replied with a soft chuckle.

Giving credit to the Steele Center

The Daineses laugh a lot. They also finish each other’s sentences as they talk about how the Steele Center allowed them to pursue their passions and research interests as a team. Both acknowledge they probably would not be in Tucson, where they’ve raised four children and helped improve the lives of countless others, if not for the center.

Cori is chief of the Department of Pediatrics’ Division of Pulmonary and Sleep Medicine and program director of its Pediatric Pulmonary Center. Outside of the Steele Center, she is director of the Cystic Fibrosis Foundation’s Tucson Therapeutics Development Center. Mike, chief of the Pediatrics Division of Allergy, Immunology and Rheumatology, is chair of the PANDA Endowed Faculty Research Fund in Autoimmune Disease Research. His work focuses on how genetic and environmental factors combine to produce allergic diseases.

Born in Casa Grande, Arizona, Mike grew up in Mesa, east of Phoenix. Cori is from West Lafayette, Indiana, but moved often as her father, an entomology professor, changed universities. 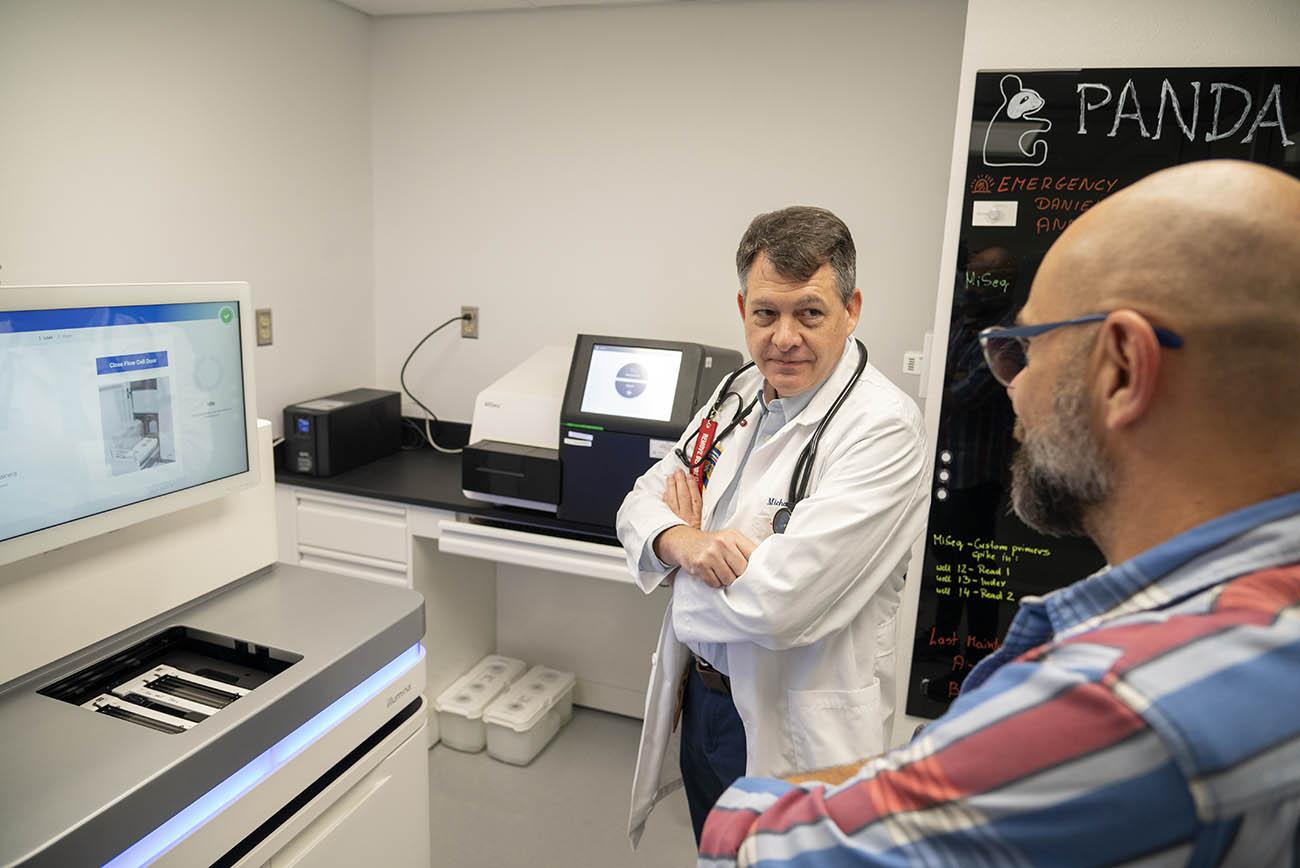 The couple met at Texas A&M and got married after graduation. They attended medical school and did their residency training in St. Louis, then finished their fellowships in North Carolina – him at Duke University and her at the University of North Carolina, two schools considered fierce rivals.

Afterward, they went to the University of Cincinnati and the Cincinnati Children’s Hospital, where they both worked on aerodigestive disorders that affect airway and gastrointestinal tracts, including eosinophilic esophagitis, eosinophilic gastroenteritis  and gastroesophageal reflux disease.

The Daineses were recruited to Tucson by Fayez Ghishan, MD, the PANDA Endowed Director of the Steele Center, pediatrics department chair and medical director of the Clinical and Translational Sciences (CATS) Research Center at UArizona Health Sciences.

Once here, they helped launch an Aerodigestive Disorders Center funded by PANDA. Mike’s main task was establishing allergy and immunology programs for pediatric and adult medicine.

“The Steele Center was what facilitated me coming out here as a spousal hire, because there was no allergist here at the time,” he said. “But what Steele did is they helped fund my research, and they helped fund my nurse to start up the program. So, both the clinical and research part of what I came here for wouldn’t have happened without the Steele Center and the Steele Foundation.”

“I was enamored with interdisciplinary care models that Dr. Ghishan was very high on establishing here in Arizona with our aerodigestive program,” Cori added. “He was instrumental in bringing us here together as a couple and has supported both our clinical and research careers.”

Due to overlapping allergy and pulmonary conditions, they share about 20% of their patients, too.

Mike is working on new research with fellow Steele Center researcher Pawel Kiela, DVM, PhD, that involves post-infection attacks on neural pathways in the brain affecting mood and behavior. They’re investigating how allergies and the microbiome interact with genetics to potentially cause pediatric acute-onset neuropsychiatric syndrome, or PANS, and pediatric autoimmune neuropsychiatric disorders associated with streptococcal infections, or PANDAS, by looking at disease biomarkers in at-risk children. They came up with an immune modulatory therapeutic – intravenous immunoglobulin, or IVIG – that’s now in Phase 3 clinical trials.

“The IVIG study relates to the autoimmune goals of the Steele Foundation and is being done through CATS as part of the Steele Center’s research,” Mike said.

Cori’s research has shown similar success. She was the North American principal investigator for a study that examined a prescription medication for cystic fibrosis sold under the brand name Trikafta and approved by the U.S. Food and Drug Administration in 2019. After the initial trial ended, Cori continued a long-term extension study and recently presented the results at the North American Cystic Fibrosis Conference.

“It has been life-altering in so many ways,” she said. “It’s the first therapeutic we have that actually tries to affect the basic pulmonary defect in cystic fibrosis. It has changed everything.” 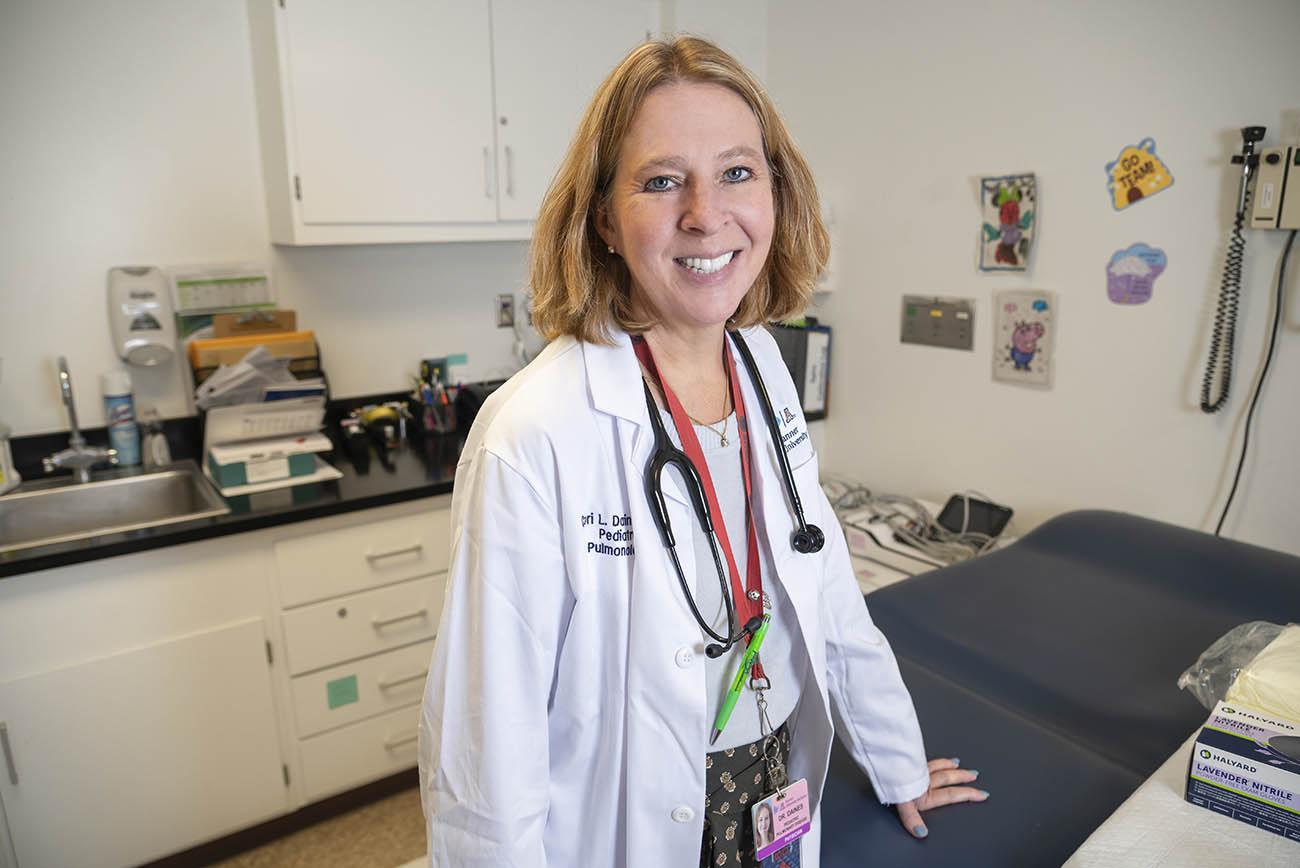 She noted Trikafta is effective in 80-85% of cystic fibrosis sufferers, especially those with a common gene mutation – but it’s not gene therapy. Rather, it operates as a protein modulator on chloride channels regulating mucus buildup that can lead to lung infections. Across 500 study participants, lung function improvement on average was more than 15%. More importantly, the results have not diminished over time.

“It’s just been amazing. It’s made it so that cystic fibrosis average life expectancy has gone from age 46 three years ago to over 50 today,” Cori said. “We anticipate over the next couple years, we’ll see a life expectancy close to 60. The population of people living with this in the U.S. has gone from about 30,000 people, which was steady over many, many years, to 33,000 people because they’re not dying. People are not dying, and the adult cystic fibrosis population is growing.”

None of that would have been possible without the Steele Center, she added.

Raising the next generation

When their children were young, the Daineses juggled schedules to make sure they didn’t miss birthdays, soccer games and school events. They wanted their kids to view medicine positively, and it worked – three of them are studying in health or related fields.

Their oldest child followed in their footsteps and went to Texas A&M for undergraduate studies and married a fellow Aggie. Both are now in medical school at Texas Tech, Cori said. “We’re aggressively recruiting them” to Arizona for residency training, Mike added.

Another earned a bachelor’s degree from UArizona and a master’s degree in speech and language pathology from Arizona State University. The third is an undergraduate at UArizona majoring in neuroscience and doing research in Dr. Kiela’s Steele Center lab while talking about medical school. “We’ll see,” Cori said.