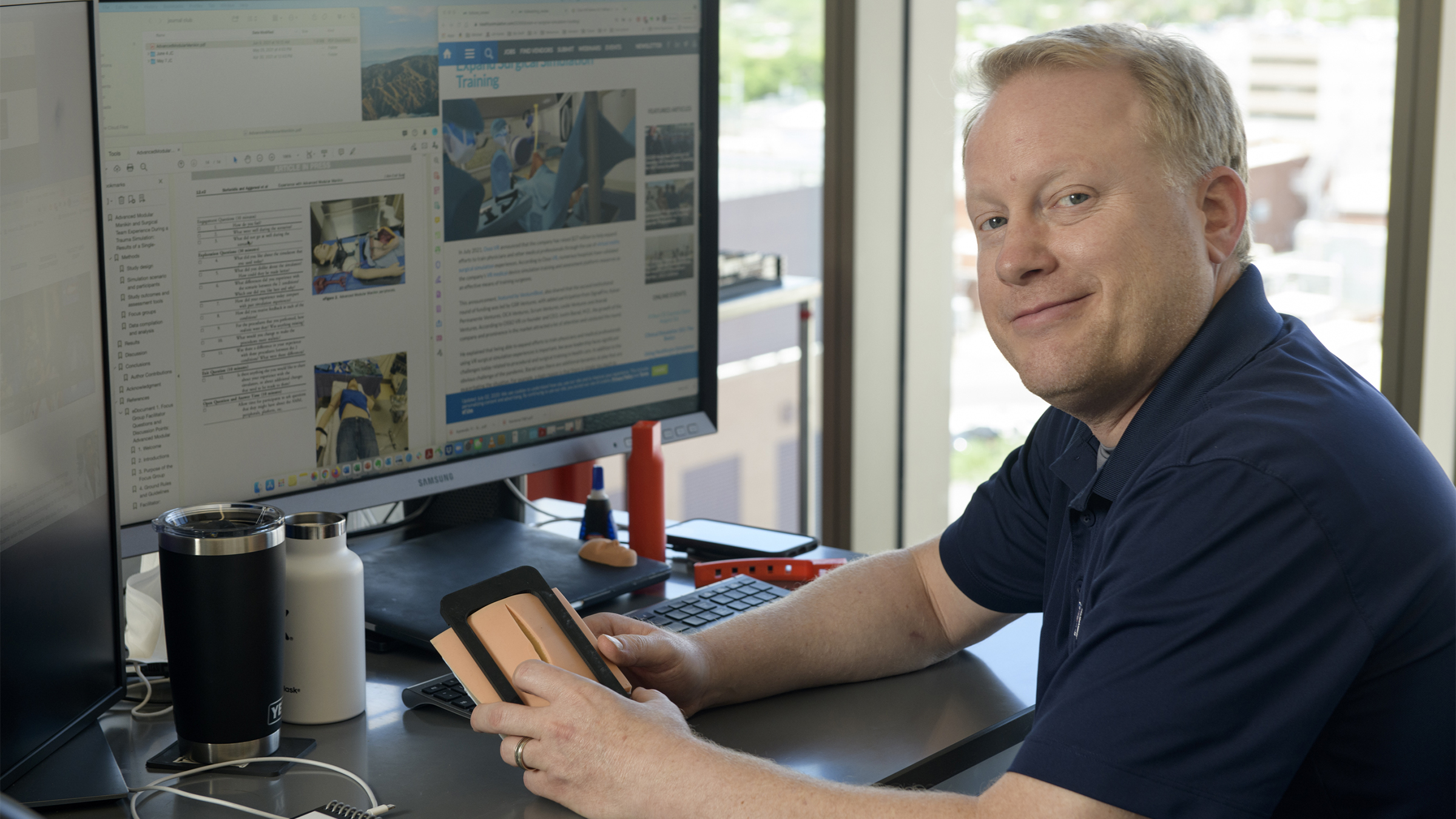 Dave Biffar uses his background in human resources and behavior management to guide the creative minds at ASTEC.

Dave Biffar, MS, CHSOS-A, likens his job as assistant director for the Arizona Simulation Technology & Education Center (ASTEC) to being a producer for “Saturday Night Live.”

“It’s not quite as complicated as making ‘Saturday Night Live’ happen every week, but there’s a lot of similarities,” he said in describing his unique role at the University of Arizona Health Sciences. “And how we bring a particular training process from inception of an idea, developing the clinical ‘script,’ identifying necessary technologies, setting up the environment, rehearsals and then, ‘OK, here we go. It's show time!’ is very much like a production process. It has the same kind of organized chaos, but in the end we pull it together.” 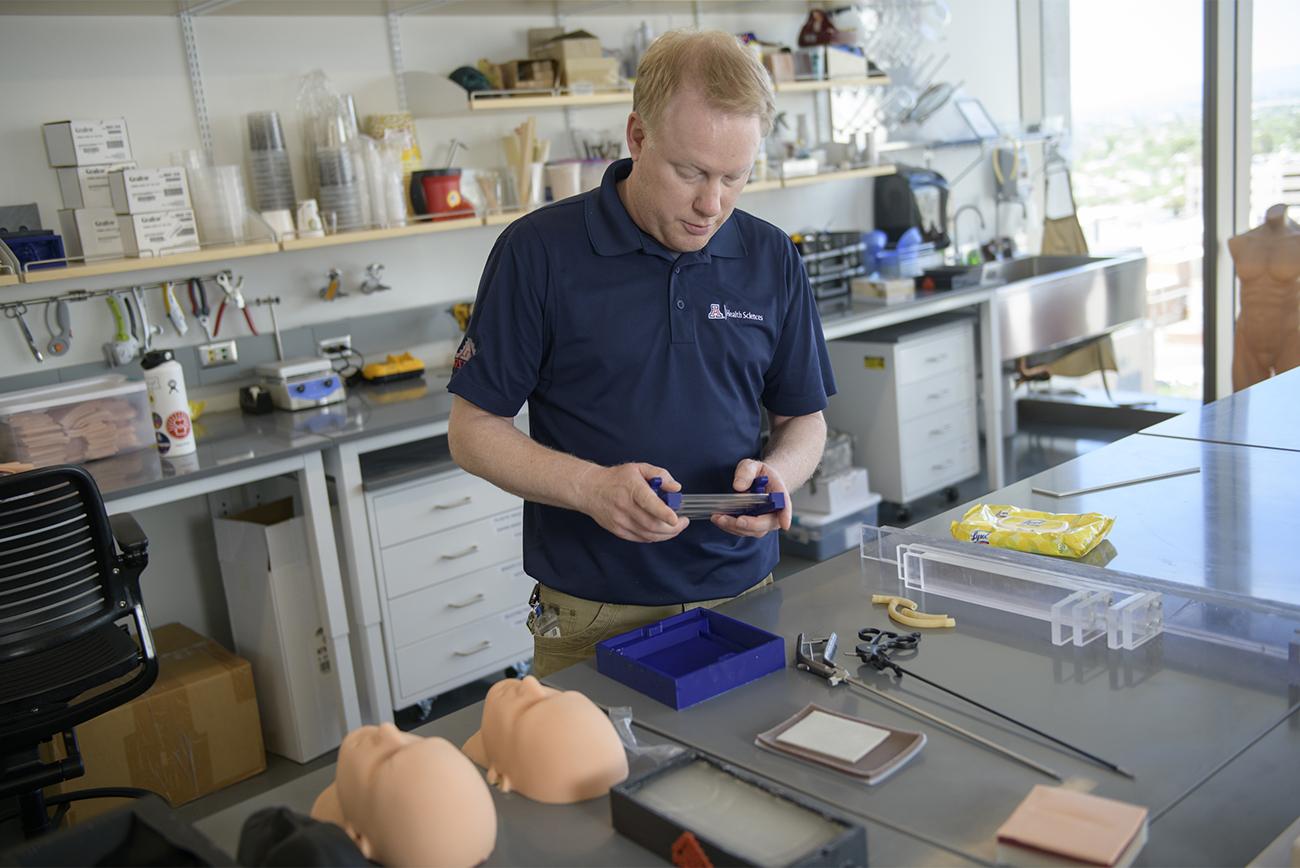 Biffar recently became one of the first people in the world to receive certification from the Society for Simulation in Healthcare as a Certified Healthcare Simulation Operations Specialist – Advanced (CHSOS-A). Unlike the exam-based CHSOS he earned a decade ago, the advanced certification requires submission of a portfolio of work that demonstrates broader instructional design, human factors analysis, interdisciplinary coordination, quality assurance and simulation best practices.

He also has been named editor-in-chief for the society’s new publication, Simulation Technology Operations Resource Magazine, or STORM. “It is geared toward non-scholarly work because the health care simulation community already has a scientific journal. What I’m doing with STORM will include scientific components but primarily will embrace exemplary works that highlight how we make health care simulation training happen in the most realistic way possible,” he said.

ASTEC Executive Director and Regents Professor of Surgery Allan Hamilton, MD, founded the center in 2004, and a year later it was named a Karl Storz Center of Excellence – one of only 10 simulation centers with that designation in the world. Biffar was appointed assistant director of operations in 2012 and has been overseeing the next-generation interprofessional educational opportunities provided by ASTEC’s realistic simulated environment ever since. He said he appreciates that Dr. Hamilton gave him “the reins to take the operation to the next level, to just explore and have fun with it.”

During his youth, Biffar was good at math and thought he might become an accountant. A Philadelphia-area native, he switched his major in college to human resources management, and after graduation he was hired as a recruiter for pharmaceutical giant Merck. His next role at VisionQuest, an at-risk youth and family services organization, helped set the stage for his current role.

“A lot of the training I did in safe crisis management required a good amount of experiential role-play, which is similar to my job now,” Biffar said. “When I received my master’s degree in mental health counseling and had a caseload, the process of working with at-risk kids required a multidisciplinary team around them to maximize success with behavior management and socially acceptable life skills.”

“We want you to make the worst mistake in your life in the simulation lab so that you don't make that same mistake in the real world.”Dave Biffar, MS, CHSOS-A

After almost 10 years in the human services field, Biffar was looking for a change. He heard about an opening at ASTEC and applied. “I didn’t realize it at first, but all of the role-play and interdisciplinary team coordination proved useful at ASTEC in developing high-fidelity, interprofessional simulation activities and working with an array of faculty instructors,” he said.

Biffar’s goal at ASTEC is figuring out new ways to train the next generation of health care professionals in the most technologically effective but straightforward manner, while incorporating interprofessional concepts whenever possible. That means getting physician, nursing, pharmacist and other trainees to work together as a team.

Soon after moving in 2019 to expanded space in the Health Sciences Innovation Building, ASTEC gained national and global recognition for its hands-on simulated learning and teaching capabilities. At the center of it all is what Biffar calls a “NASA-like control room” in a SimDeck consisting of six high-fidelity patient care rooms and multiple areas for procedural competencies..

“We can run the whole center, any room from any station, in the control room,” Biffar said. “It's all centralized on this Hollywood set-like switchboard. As for the SimDeck, you can bend and flex it any way you want based on the learner group and objectives, and whether they’re procedure-based, scenario-based training or both.”

Regardless of which way ASTEC is configured, Biffar said, “We want you to make the worst mistake in your life in the simulation lab so that you don't make that same mistake in the real world.”