With billions of people using social media globally, Health Sciences researchers have an opportunity to communicate science to a wider audience than ever before.
June 13, 2022 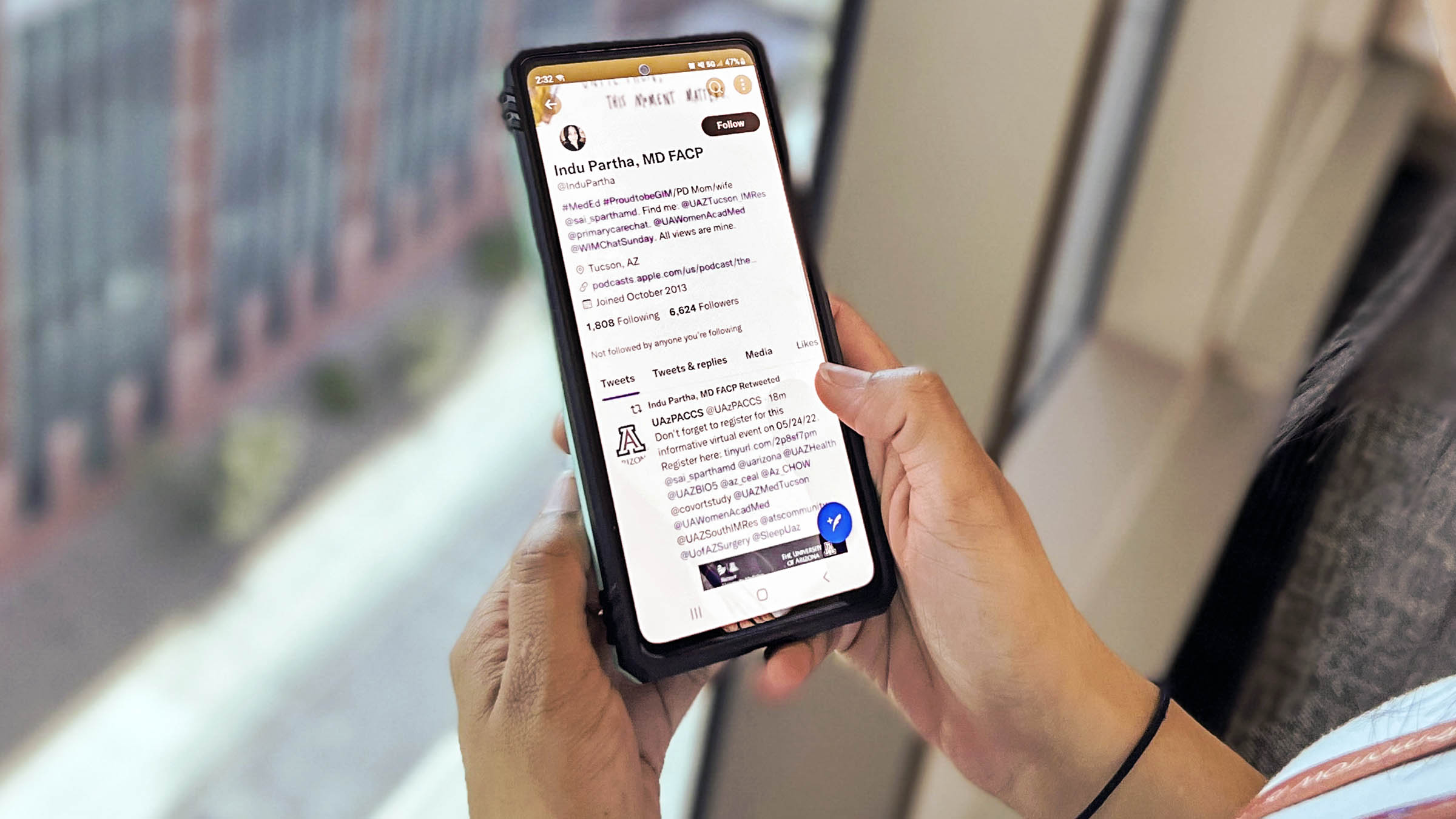 When thoughtfully used by scientists, researchers and clinicians, social media can be a tool to promote science and health literacy among a general audience.

Social media has emerged as one of the most powerful forms of communication worldwide. Its simplicity and accessibility make it almost effortless for users of virtually any age to join and share content across a multitude of platforms.

To put into perspective how wide social media’s reach is, an analysis by marketing strategy consultancy Kepios estimates there were 4.65 billion social media users globally in April 2022, an increase of 326 million users over the same month last year. 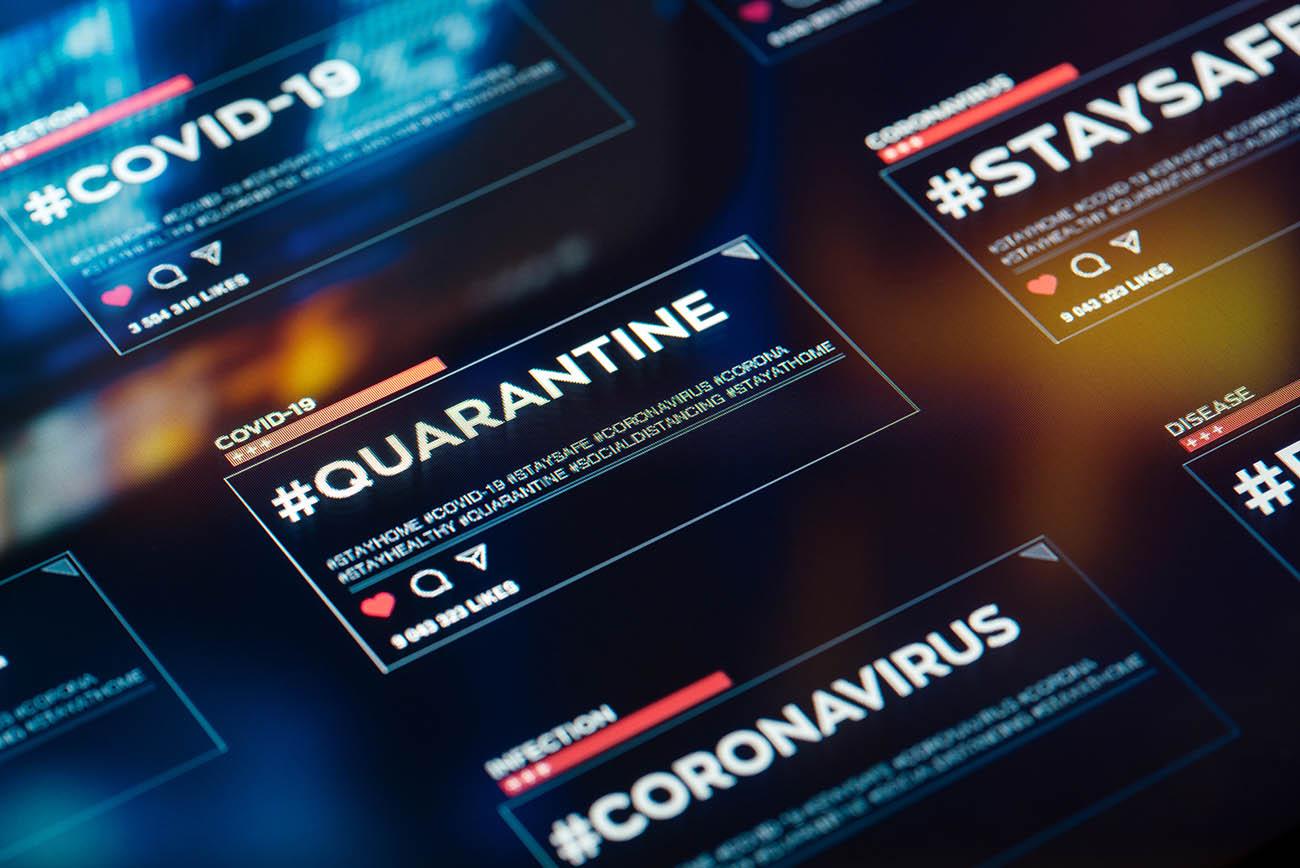 For many, social media can be used to expand their social and professional networks, share photos, information and opinions with a broader audience, start conversations and engage with that audience, as well as build their reputation and brand.

Scientists and researchers in particular can use it to inform their peers and educate the public about new research and discoveries relevant to their lives. When employed thoughtfully, social media can be a tool to promote science and health literacy among a general audience. Alternatively, social media used in a maliciously misleading way can spread misinformation and have damaging consequences.

Indu Partha, MD, clinical assistant professor in the University of Arizona College of Medicine – Tucson Department of Medicine, is an active Twitter user.

In addition to her personal account, @InduPartha, Dr. Partha oversees several other accounts like @SundayWIMChat, which provides a space for women in medicine to discuss internal medicine topics and @primarycarechat, which hosts weekly conversations between primary care providers where they take a deep dive into various medical topics. Another Twitter account Dr. Partha oversees, @UAWomenAcadMed, offers mentorship, networking and career development space for female College of Medicine – Tucson faculty. 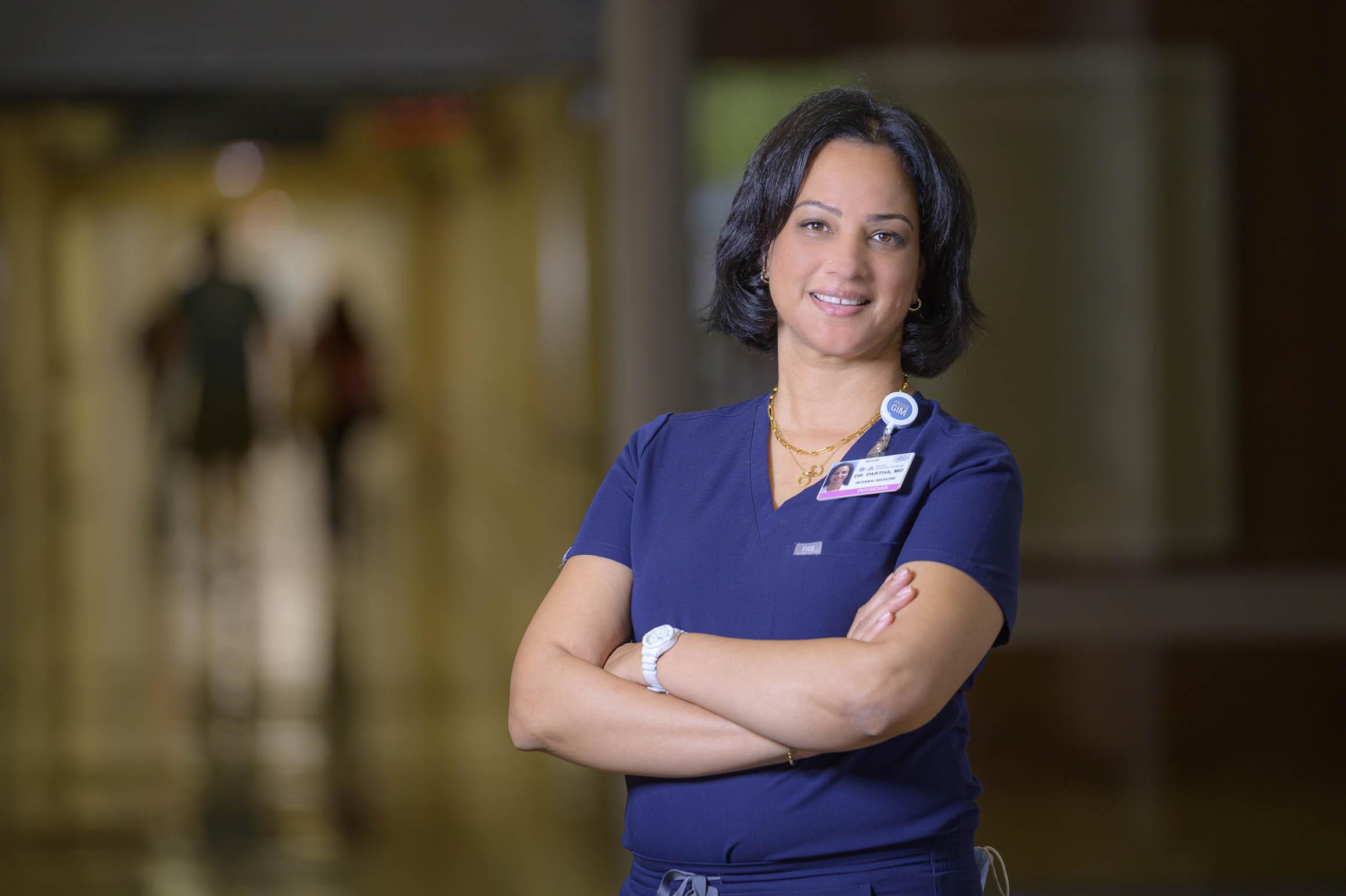 “I think social media allows for making amazing connections across the country,” Dr. Partha said. “I love being able to ‘access’ colleagues and experts who live on the other side of the United States that I would normally know nothing about in my day-to-day life in Tucson.”

“I think many people associate social media with negative connotations – representing a false sense of a perfect life, beautiful photos and something more superficial,” she added. “I encourage people to look closer to see what avenues social media can open professionally.”

“I think I’ve had my Twitter account since 2016 or so, but I almost never logged on and never tweeted anything until the spring of 2020,” Dr. Bhattacharya, who is also a member of the BIO5 Institute, explained. 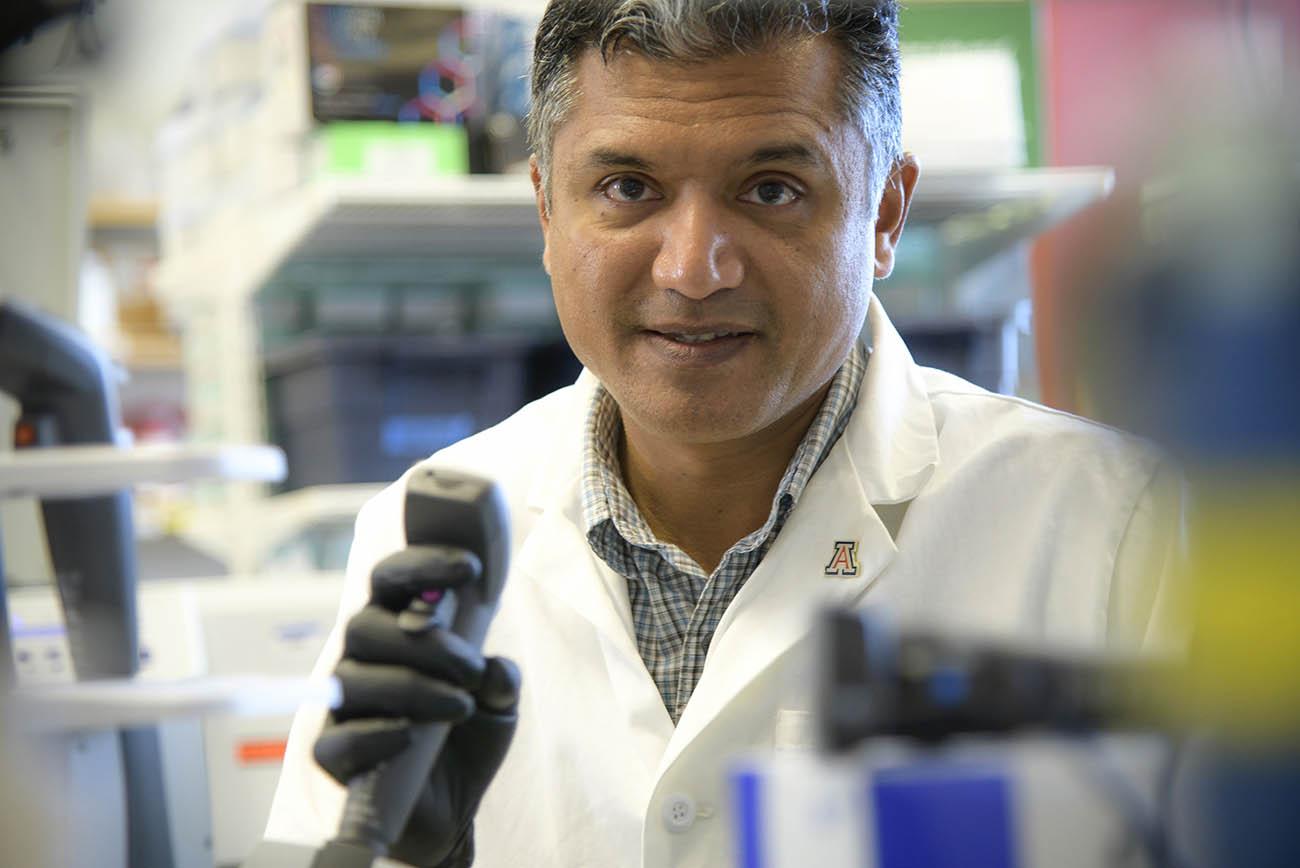 “At that time, I started getting really frustrated with some of the news coverage of the pandemic, as I felt that they were getting a lot of the basic immunology wrong, for instance equating COVID-19 to AIDS. I felt that Twitter was a venue that allowed me and other immunologists to respond.

“Interestingly, as I started tweeting and my follower count increased, I started getting interview requests from journalists. I had really underappreciated how science journalists were using Twitter as a guide to decide who to interview. I’m not sure this is the best model of how to choose sources, but overall I do think they have been doing a much better job in choosing people with relevant expertise.”

For Bellal Joseph, MD, College of Medicine – Tucson, Division of Trauma, Surgical Critical Care, Burns, and Acute Care Surgery chief, connecting to people all over the world, knowledge-sharing and learning others’ perspectives are his reason for using social media, particularly Twitter.

“I post on Twitter for different reasons,” Dr. Joseph explained. “Sometimes it’s my own expression of feelings or thoughts, other times its intended as mentorship, coaching or lessons learned. There is a part dedicated to science research, medicine and current trends and I often seek out opinions from people around the world. There is also a social aspect in building connections with many thought leaders and people around the country. Finally, the personal and family posts are to show people that we are all the same. It’s to humanize my account rather than create a separation.”

Dr. Joseph’s Twitter account proudly displays the coveted blue “verified” badge that indicates an account of public interest is authentic (identity confirmed), notable (associated with a prominently recognized individual or brand) and active (with a record of adherence to Twitter’s rules). 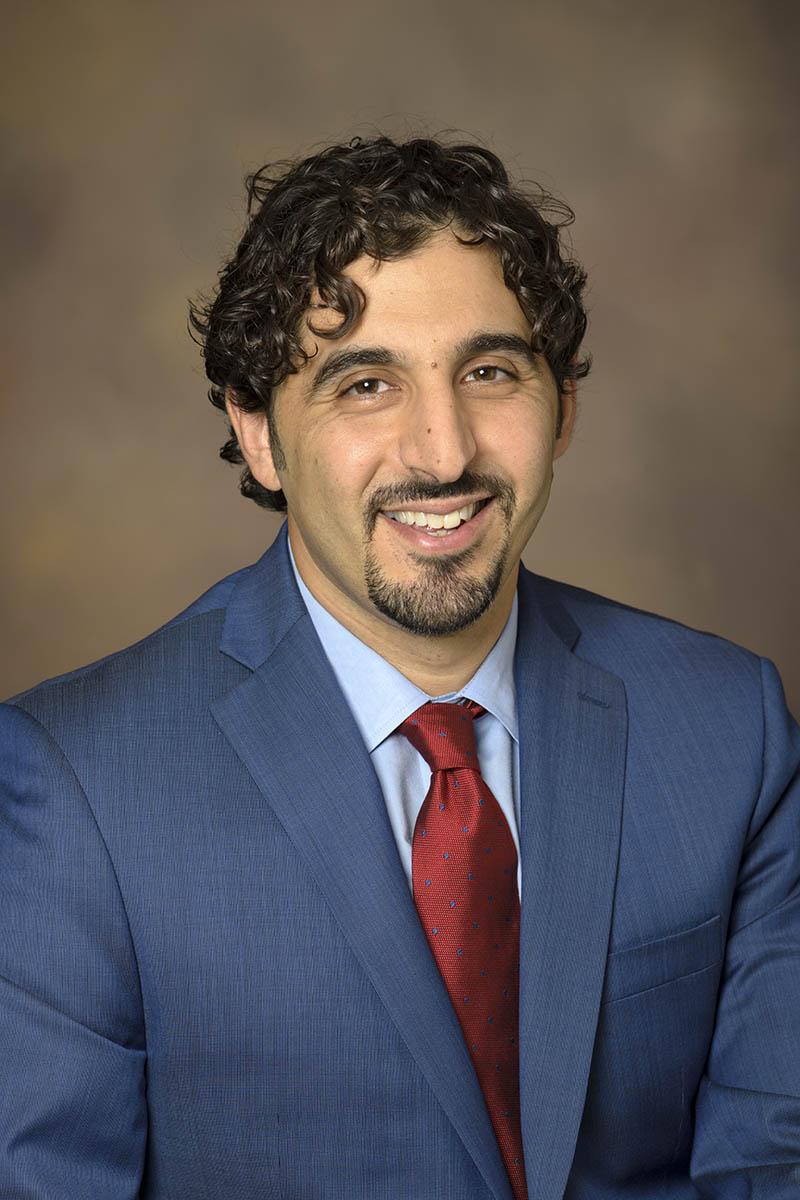 “Building trust comes with time and content,” explained Dr. Joseph, who is also a professor of neurosurgery. “Keeping it real to my own thoughts and feelings are important. The blue verified badge also keeps me in check to make sure I’m tweeting and to the standard that got me to that point.”

Dr. Partha’s approach to building trust with her followers is simple – be authentic. “I try my best to be authentic online,” she said. “My online presence truly represents who I am ‘in person.’ I like to think that I am a trustworthy, down-to-earth person in real life, and I hope that my audience can pick up on that through my posts. I also am watchful about any medical information I post. I stick to the science.”

Staying true to the science is also Dr. Bhattacharya’s approach. “I try to keep my tweets confined to my area of expertise – immunology,” he said. “My style is very much more about informing than it is trying to persuade people to do something per se. The goal is to try and give people accurate information so that they can come to the hopefully correct decision on their own. I don’t weigh in on polarizing public health recommendations or policies because that is not my area of expertise, and it would be counterproductive.”

Dr. Partha said that when it comes to misinformation spreaders and science deniers invading her social media, she has been lucky. “I have not been placed in a position to defend science, fortunately,” she said.

“Every once in a while, I get an anonymous bot or troll-type of account that tweets something snarky but I just ignore these,” Dr. Bhattacharya said. “They have no influence on others and there is no point in elevating their profiles by engaging.” 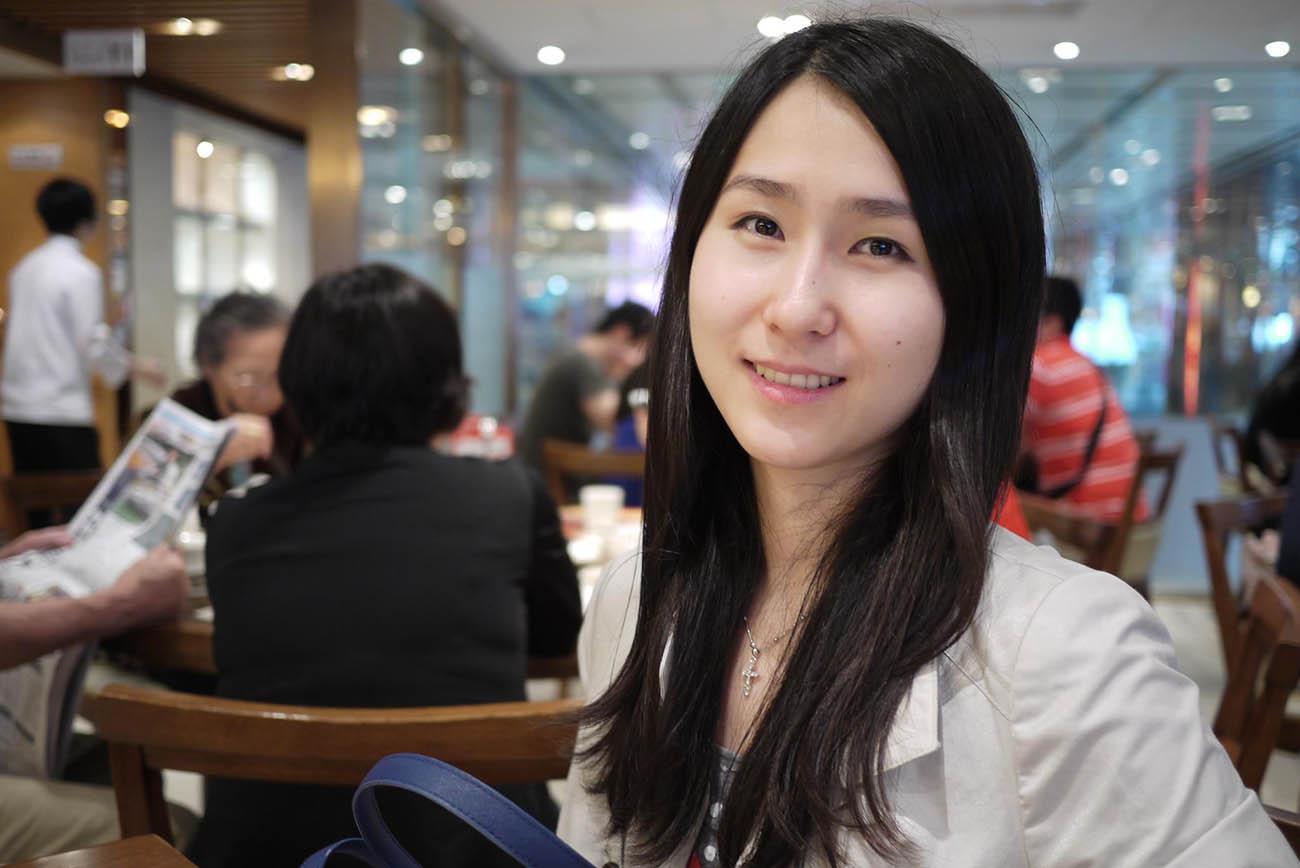 As a daily Twitter user to a wider audience, Dr. Joseph has found his own way to contend with this issue. “Over time, I realized that when I’m engaging with conspiracy theorists, it’s different than engaging with those who just question the science. As a scientist, I question everything we do each day, but I look at the data and literature to find support. I try not to read tweets from conspiracy theorists or people who are there just for the controversy. Often the best thing to do is to stay focused on my brand and my message,” he said.

Dam Hee Kim, PhD, assistant professor in the UArizona College of Social and Behavioral Sciences Department of Communications, researches how people share and engage with news and politics on social media.

“On social media, there is not necessarily editorial filtering or fact-checking in place before anyone posts any information,” Dr. Kim said. “Information, correct and incorrect, along with entertainment and social content are all presented together on social media, which makes it challenging for users to separate facts from opinions and false information.”

Dr. Kim’s ongoing research found that social media might have fueled the anti-vaxxer movement by facilitating misbeliefs about COVID-19, such as that COVID deaths are exaggerated. “These misbeliefs are then associated with vaccination avoidance,” Dr. Kim said. “On social media feeds, users are likely to be presented with information social media algorithms think users would like, engage with or agree with.”

If users’ beliefs and views can be solidified when they rely on social media for information, how should scientists counter misinformation?

“It is important for health scientists to share correct health information on their social platforms and encourage more social media users to actively engage with it by commenting and sharing it with others,” Dr. Kim said. “When engagement numbers on scientifically informed posts are higher, the social media algorithm will push those posts further to reach a wider audience.”

The Health Sciences Office of Communications has a social media toolkit that includes an array of resources, including official guidelines for social media use.

Anyone can post about science on their social media accounts, but communicating it well so that followers engage with science and trust you as a source of information takes some extra thought.

Below are some dos and don’ts on communicating science using personal social media accounts.