Frederic Zenhausern, PhD, MBA, leads a team developing portable technology to detect a range of health problems in a matter of minutes.
August 13, 2020 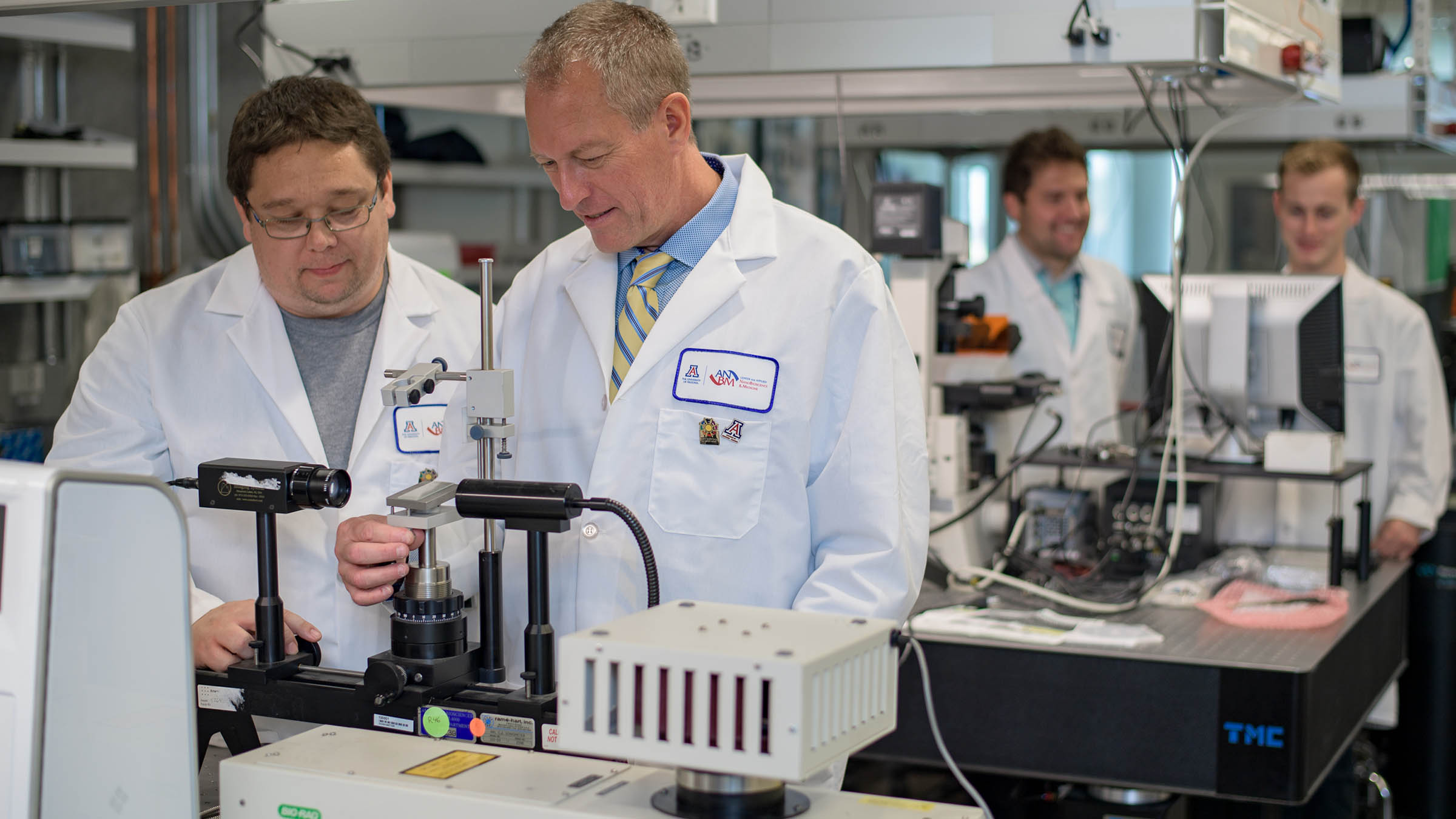 In this 2017 photo, Frederic Zenhausern, PhD, MBA, right, director of the Center for Applied NanoBioscience and Medicine, works with Matthew Barrett, a senior research specialist.

When Frederic Zenhausern, PhD, MBA, was in college, he made the switch from biochemistry to physics. That transition continues to inform his work at the University of Arizona Health Sciences to create personal testing devices to help people learn about their health and their exposure to biothreats. 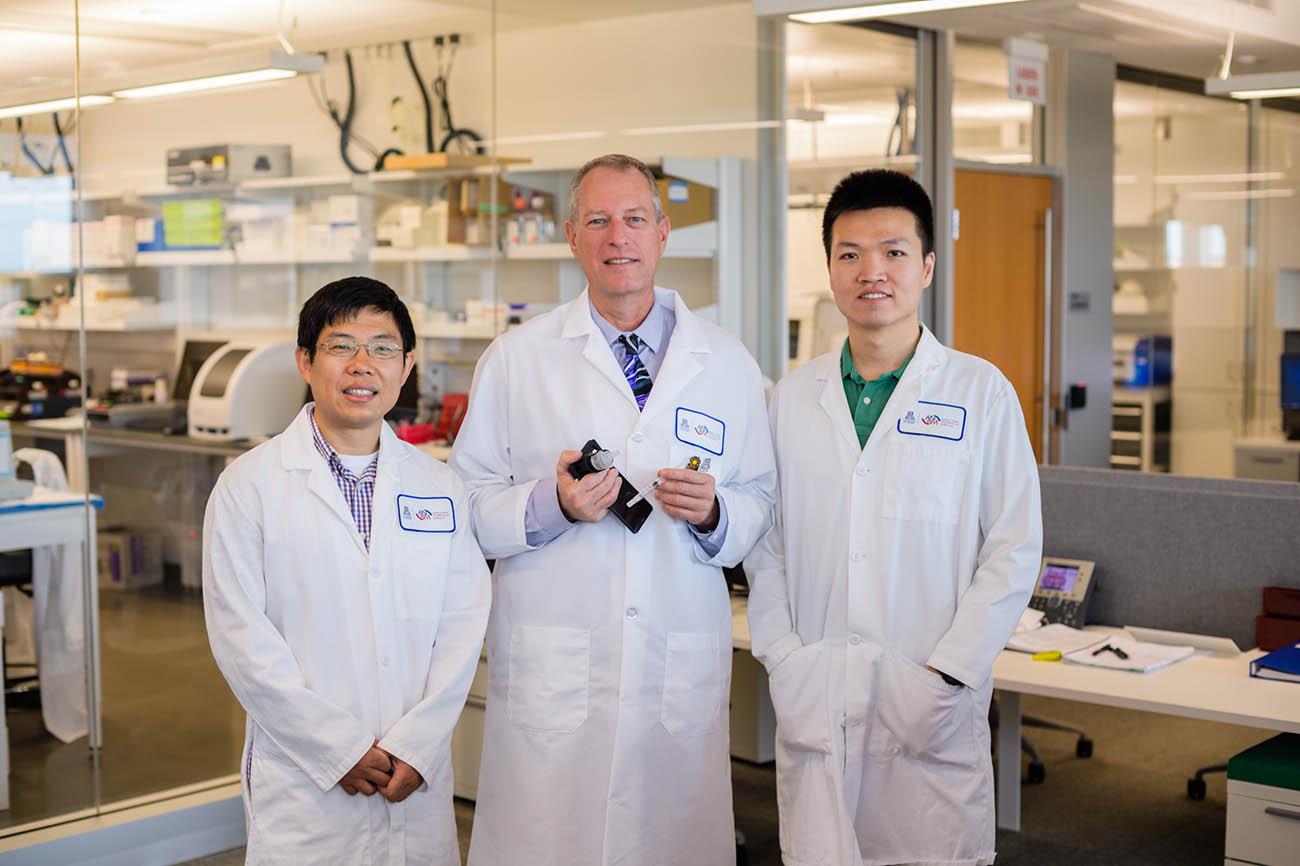 Dr. Zenhausern, interim co-chair and professor of Basic Medical Sciences in the UArizona College of Medicine – Phoenix, said he was inspired when IBM earned a 1986 Nobel Prize for a microscope that can show surfaces and molecules at the atomic level of detail. He sought a summer internship at IBM Research, and despite some initial resistance to allowing a biologist into the realm of pure physics, he was soon welcomed into the field. “I spent the summer with them and did some very interesting work imaging the first small virus using the scanning tunneling microscope. That’s how I entered the physics world.”

Now, as director of the Center for Applied NanoBioscience and Medicine he works to pair high-tech diagnostics with handheld technology. Dr. Zenhausern hopes to make rapid tests for a wide range of health conditions more accessible — which could have applications from Earth to outer space.

The current at-home testing technology for pregnancy or HIV infection is called an immunoassay. The device uses urine or blood on the surface of a paper strip to determine if a specific hormone or virus is present. The Zenhausern Lab is developing a vertical flow immunoassay, which can reveal multiple biomarkers for a wider range of conditions, instead of just looking at one target biomarker. 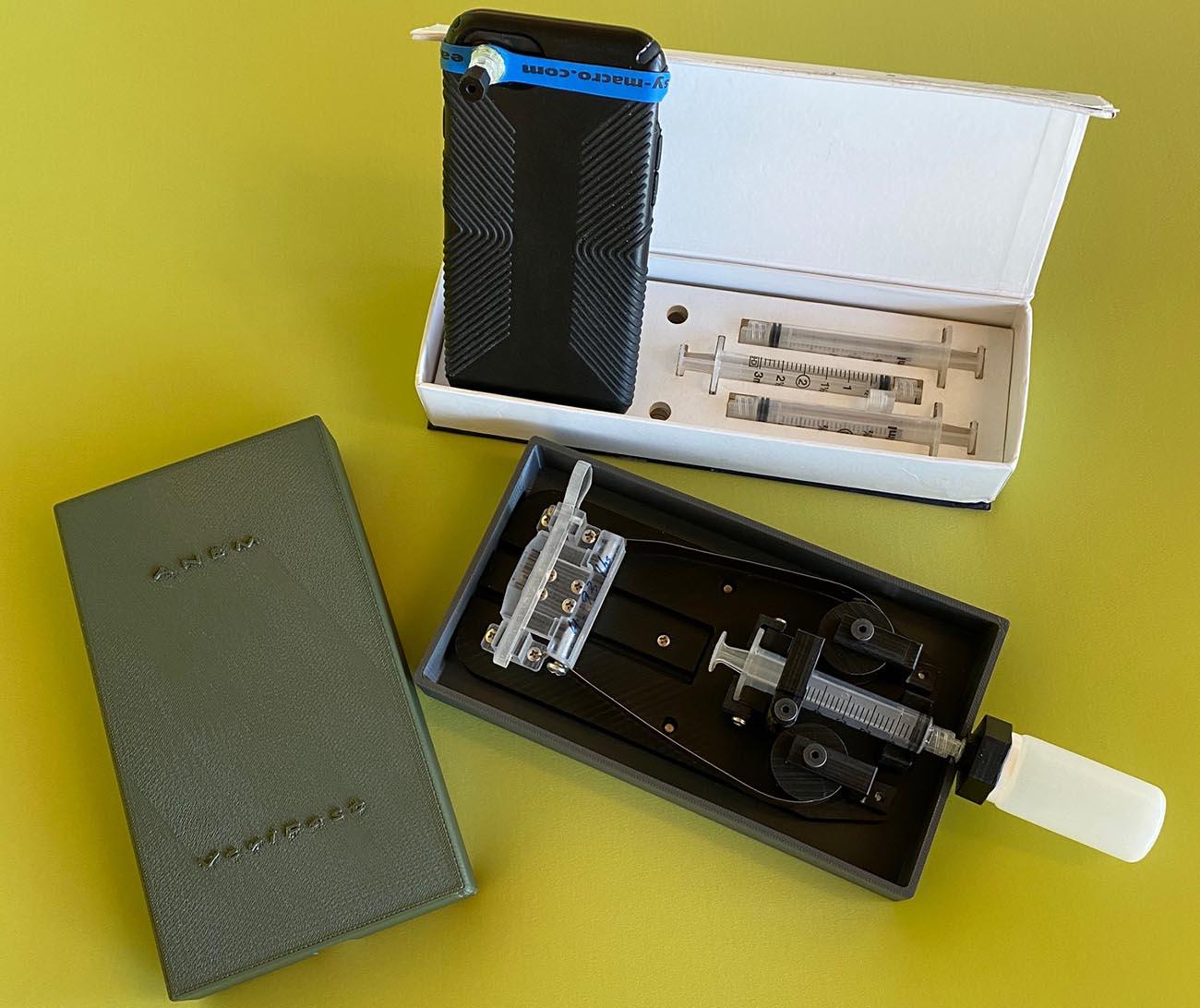 “In place of letting the fluid go along the paper, we push the fluid through the paper,” Dr. Zenhausern explained. “We print spots on the paper, and we can print hundreds of spots — so we can detect potentially hundreds of different biomarkers.”

A device, such as a smartphone with a special attachment to its camera, will take a picture of the array of spots that detect the biomarkers. The image then can be analyzed by an algorithm, and in less than 15 minutes, it can show whether the individual has any of the biomarkers.

“It’s much faster and more sensitive,” Dr. Zenhausern explained, adding that the technology could potentially be used for early detection, when a biomarker is still in low concentrations in a fluid sample.

Testing biothreats on Earth and radiation in space

With funding from the Department of Defense, Dr. Zenhausern’s team is developing a vertical flow immunoassay diagnostic test that interfaces with a smartphone and can be used on the battlefield. Users would take blood or urine into a syringe and push the fluid onto a test strip. The device would take a picture of that paper membrane, telling users if they have been exposed to pathogens such as those that cause anthrax or plague.

“An individual in a combat zone or a first responder in the field could know within minutes if they have — or were exposed to — a serious pathogen or biothreat,” Dr. Zenhausern said. “We want the brave individuals serving on the front lines to be safe.”

Working with NASA, the Zenhausern Lab has also sent this technology into outer space to improve diagnostics for radiation exposure in astronauts. With a drop of blood and a handheld device, the assay can check a variety of genes.

“Genes can be a good signature of your exposure to radiation,” Dr. Zenhausern said. “We can learn the dose at which you have been exposed, and the kind of radiation you have been exposed to. The goal was to fully automate a vertical flow system in space, to monitor radiation exposure for astronauts when they go on deep space mission, for example to Mars.”

The need for speed

When the COVID-19 pandemic hit, the Zenhausern Lab received funding to extend the development of its space-based health monitoring system to build a prototype for COVID-19 testing. 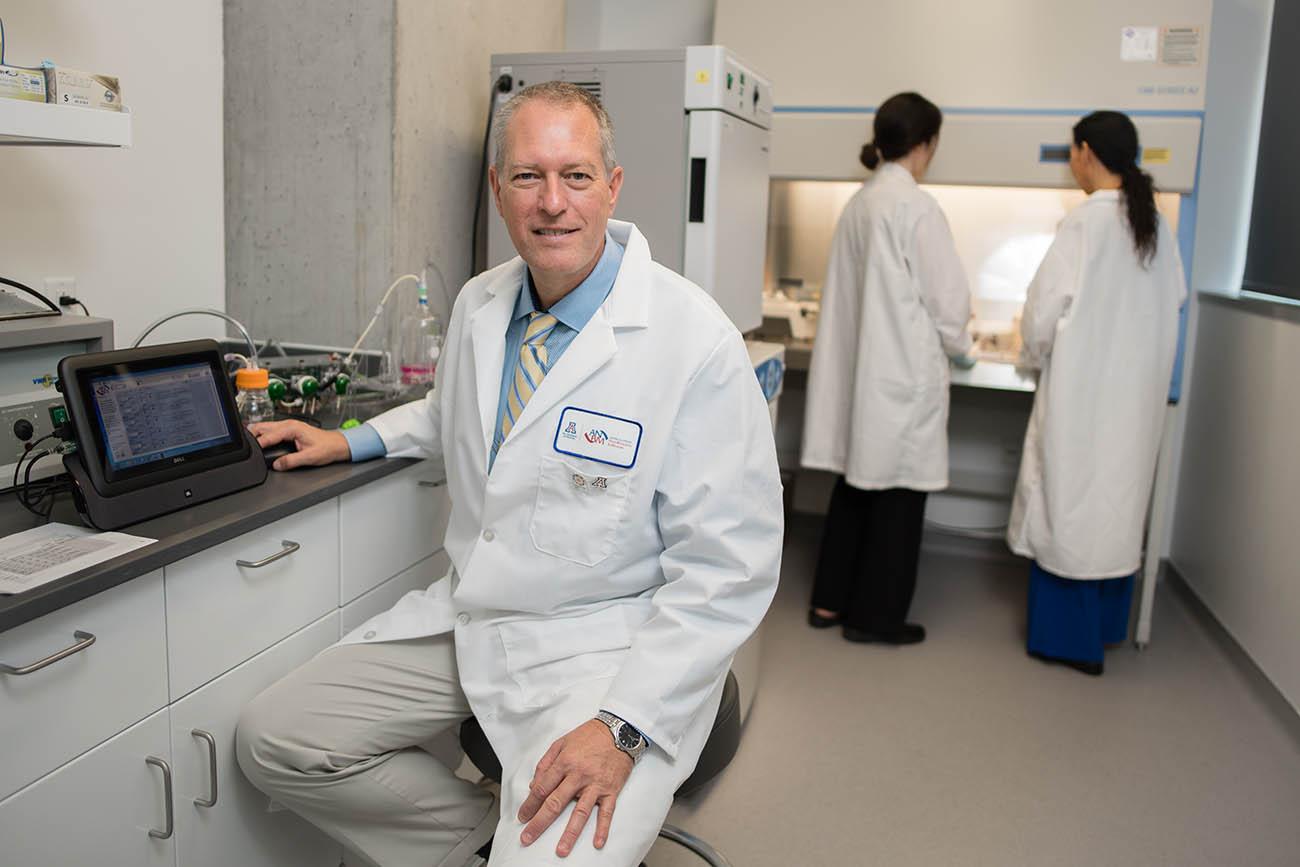 “NASA was interested to leverage technology they had been investing in for space research, and apply it to COVID-19,” Dr. Zenhausern said. “If we had this kind of device, we would have the capability to test for SARS-COV-2 infection sooner and faster.”

Dr. Zenhausern said there hasn’t been much investment by industry in rapid diagnostics.

“COVID has completely changed the landscape,” he said. “Through this technology, we could deliver point-of-care diagnostics in a parking lot, hospital emergency room, in an outpatient clinic and at a pharmacy, or even at home, that could be completed in several minutes and deliver secure results. As cases of the virus continue to increase across the globe, specifically in Arizona, the need for a rapid diagnostic test for the COVID-19 virus is crucial.”

“I am driven by the fact that I like to have an impact on society,” Dr. Zenhausern said. “I like to do things that people can use, and that ultimately have benefit. We want to improve quality of life.”

The biothreat detection project is funded by the Defense Threat Reduction Agency (DTRA), which is part of the U.S. Department of Defense. The agreement is for up to $9.5 million for three years, to produce about 3,000 devices. Dr. Zenhausern and his team members, including Associate Professor Jian Gu, PhD, are creating the device in collaboration with scientists from the University of Nevada, Arizona State University, Duke University and Whitespace Enterprises, an Arizona-based startup founded by Dr. Zenhausern.

The space-based health monitoring system is co-developed at the center with Jerome Lacombe, PhD, and Dr. Gu funded by a first $30,000 seed grant and a second $100,000 grant from NASA and its Translational Research Institute for Space Health (TRISH). The COVID-19 rapid testing prototype is funded by a grant for $150,000 from TRISH through NASA. Dr. Zenhausern’s lab is working on the project with Dr. Pierre Cosson at the University of Geneva in Switzerland, and David AuCoin, PhD, at the University of Nevada in Reno.