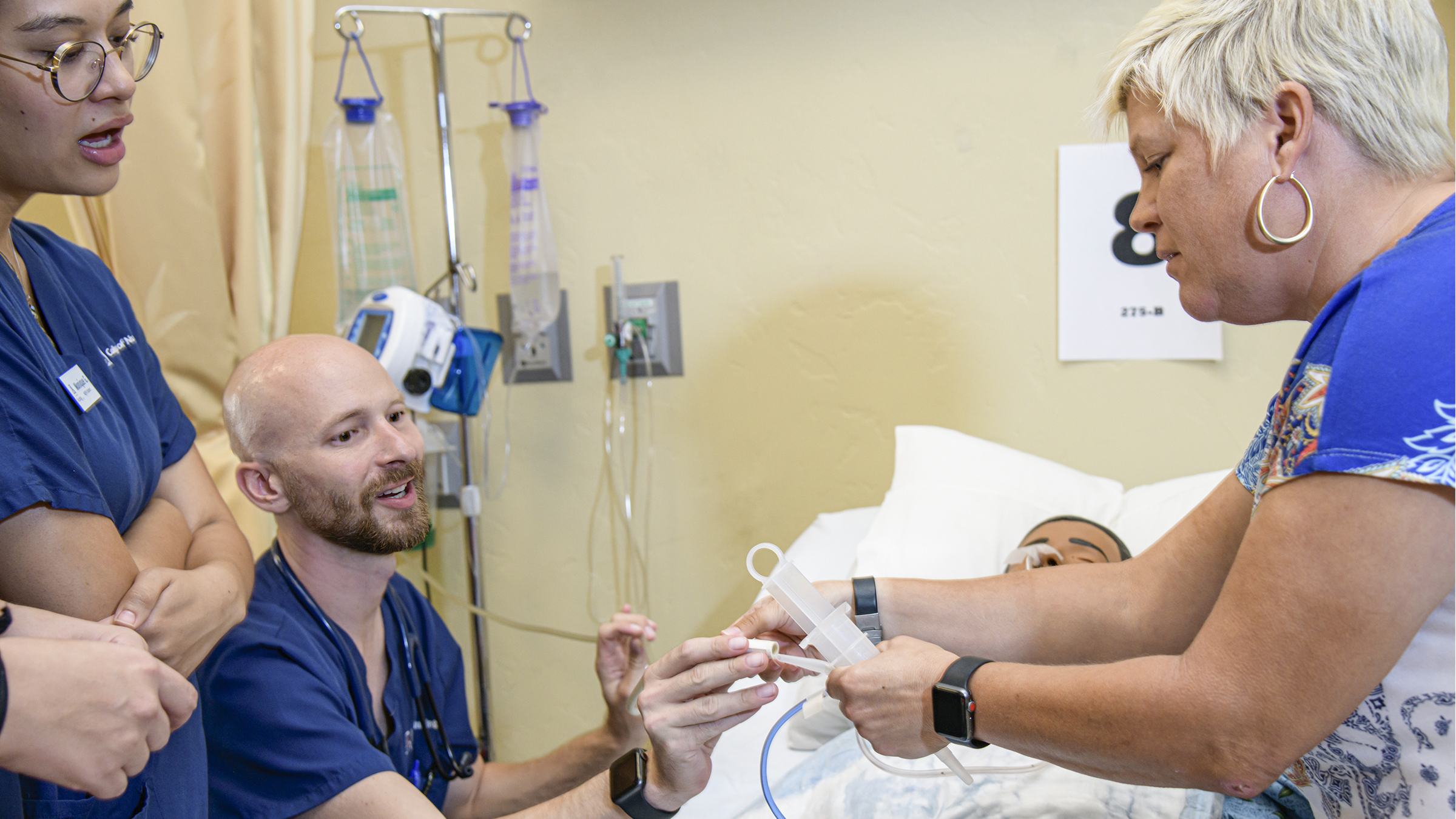 Veteran Nick Knapton, a graduate student in the University of Arizona College of Nursing, uses a wheelchair — but not as a result of being shot and wounded while serving in the Army. He was paralyzed much later by Lyme disease.

If you want to know more about Knapton, just ask him. He welcomes questions and readily shares his story to teach people how better to understand veterans and people with disabilities.

Knapton’s experiences fuel his passion to help people. He advocates for veterans’ services on campus and works with the UArizona Disability Resource Center (DRC) to improve access for those whose mobility is challenged.

One of his most important tools is his story, which he tells to inspire compassion for others in similar situations.

After high school, Knapton joined the Army, performing intelligence and counterintelligence work. He served multiple deployments, including in Afghanistan, where he was shot at (his bullet-resistant vests absorbed the rounds) and took shrapnel in his back and legs. Those wounds healed, but the hardest blow to recover from was inflicted in Kandahar City, where he witnessed the killing of one of his best friends. 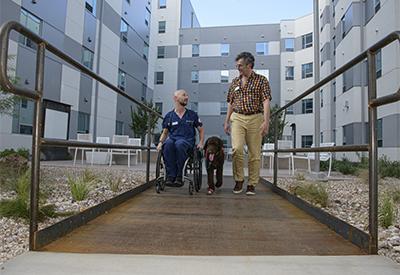 “I held myself responsible for his death for a long time,” says Knapton, who was experiencing the symptoms of posttraumatic stress disorder. “It was his family who said, ‘This wasn’t your fault. He saved other people. If that rocket-propelled grenade hadn’t struck him, it might have struck you or some children nearby.’ They helped me recognize that instead of feeling guilty, I can feel thankful and appreciate the sacrifice he made.”

Not long after, Knapton’s father lost his battle with cancer.

“I remembered the last thing my father said to me was to do what makes me happy and take care of myself,” Knapton recalled. “I realized he wasn’t doing either of those things.”

The back-to-back losses of his best friend and his father were the catalysts that motivated Knapton to make a change. He left the military and enrolled at the University of Wisconsin. He became involved in the veteran services organization, eventually serving as president. After transferring to UArizona to complete his undergraduate degree in physiology, he continued to advocate for veterans after realizing many students had never interacted with veterans or heard their stories.

One of Knapton’s professors, who knew he was a veteran, asked him to talk to the class about PTSD. The class was learning about the physiology of PTSD.

“If you talk about it, people who don’t know what you’ve been through can begin to understand,” Knapton says. “It was eye opening.”

The experience uncovered a love of teaching.

“I hear veterans say, ‘People don’t understand what I went through.’ My philosophy has always been, well, explain it to them.”

Knapton was on the ground floor of developing the Disability Cultural Center, one of only a few in the nation to provide a space for students, faculty, and staff to explore and celebrate disability identity, culture and community.

Knapton’s journey took another turn two years ago, while still a physiology undergraduate, when he was diagnosed with Lyme disease.

“I started to get migraine headaches and could not get out of bed. Then I couldn’t control my blood pressure. It would just plummet and I would faint for no reason. I couldn’t understand what was going on,” he says.

His doctor suggested he be tested for Lyme disease — the result was positive. Neither Knapton nor his doctor know when he contracted the infection. He says he may have had it for five to 10 years before it moved into his spinal cord. Before Knapton could be fully treated, the disease ate away at the nerves in his spine, paralyzing him from the waist down. “In three months, I went from very healthy, to waking up paralyzed.”

He credits his time in Afghanistan for helping him adapt to being in a wheelchair.

“I was able to experience a culture that is more concerned about whether they or their family is safe, and whether they are going to be able to eat or have water today,” he says. “In spite of these worries, you see children laughing, people smiling, still enjoying life. I knew I can handle this. Other people handle far worse on a daily basis.”

Knapton connected with the DRC to help him adjust to taking classes in a wheelchair. He says he always assumed the Americans with Disabilities Act made everything accessible to people with disabilities, but quickly learned that is not the case. In response, he got involved with the DRC to increase accessibility on campus.

Knapton helped develop the Disability Cultural Center, one of very few in the nation to provide a space for students, faculty, and staff to explore and celebrate disability identity, culture and community. “Being disabled is really a culture. We experience things from a different point of view than the rest of the able-bodied population,” Knapton says.

“I knew I can handle this. Other people handle far worse on a daily basis.”
Nick Knapton, graduate student at the UArizona College of Nursing

Through the DRC, he also became involved in the adaptive athletics program, participating in and supporting the wheelchair racing and tennis teams. “We have adaptive athletic teams that are winning national and world championships, and bringing home gold medals from the Paralympics Games. We should be proud and spread the word.”

At the Physiology Department graduation ceremony last May, Knapton was nominated by his peers to receive the Wildcat Senior Award, which is given to a student who has employed perseverance and a positive attitude to overcome obstacles on the road to graduation. Two days later, he started the Master of Science for Entry to the Profession of Nursing (MEPN) at the UArizona College of Nursing. The 15-month program is designed for students holding degrees in other fields to become registered nurses.

Reflecting on the years he’s spent spreading awareness about veterans, disabilities and accessibility, Knapton set his sights on his ultimate target.

“My long-term goal is to become a nurse educator,” he says. “If you want to change something, you teach.”

In December 2020, the University of Arizona was named a Purple Heart University. This designation from the Military Order of the Purple Heart exemplifies the university’s commitment to provide the best opportunities for student veterans and military-connected students. According to Military Times, UArizona is one of the top 20 best colleges for veterans overall, and No. 15 among public universities.

The core of the university’s commitment to student veterans resides in the University of Arizona’s Veterans Education and Transition Services (VETS) program, which comprises two centers on campus, one on main campus in the Student Union, and another in the University of Arizona Health Sciences – Tucson campus. VETS uses feedback from military-connected students to create a comprehensive, integrated program to meet the needs of each student. Whether students are reservists, on active duty or transitioning away from service, VETS provides tailored programs to help them pursue their educational and career goals.