Narrowing in on Novel Treatment for Alzheimer’s Disease

A team led by the University of Arizona College of Pharmacy hopes to develop a drug to prevent or reverse this devastating neurodegenerative disorder.
August 5, 2020 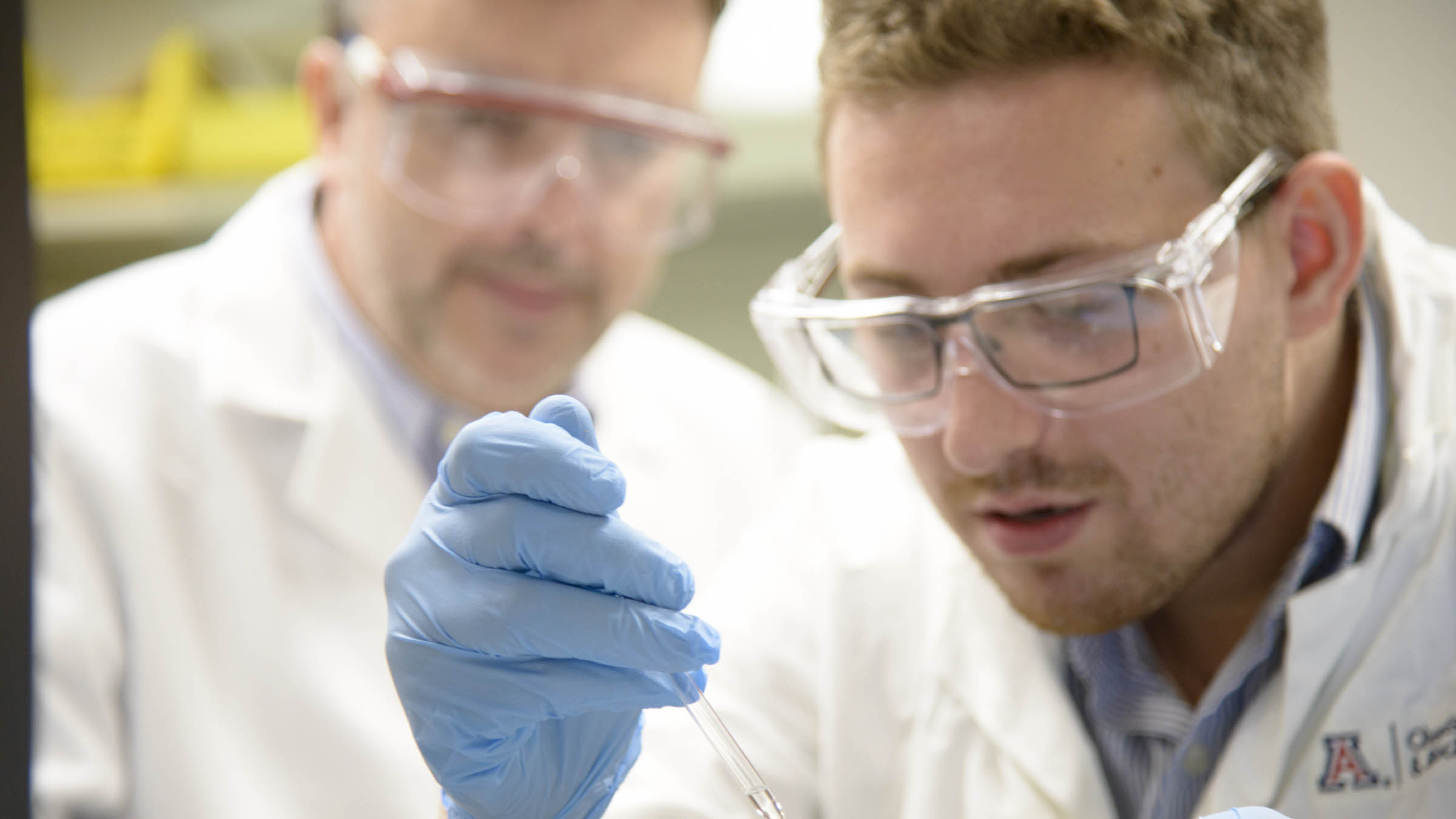 Chris Foley, PhD, right, is a postdoctoral researcher in the Hulme Lab, which is devoted to finding ways to nip Alzheimer’s disease in the bud by targeting an enzyme crucial to its development. Chris Hulme, PhD, is pictured in the background.

Narrowing in on Novel Treatment for Alzheimer’s Disease

When Chris Hulme, PhD, professor of pharmacology and toxicology, joined the College of Pharmacy in 2007, he brought to University of Arizona Health Sciences 15 years of pharmaceutical industry experience investigating treatments for conditions as varied as pain, bone metabolism and Alzheimer’s disease. Since 2012, his focus has narrowed to Alzheimer’s disease, and he’s especially interested in a gene called DYRK1A, which is thought to trigger a cascade of events that lead not only to Alzheimer’s disease, but also to other neurodegenerative diseases, such as Lewy body dementia and Parkinson’s disease. 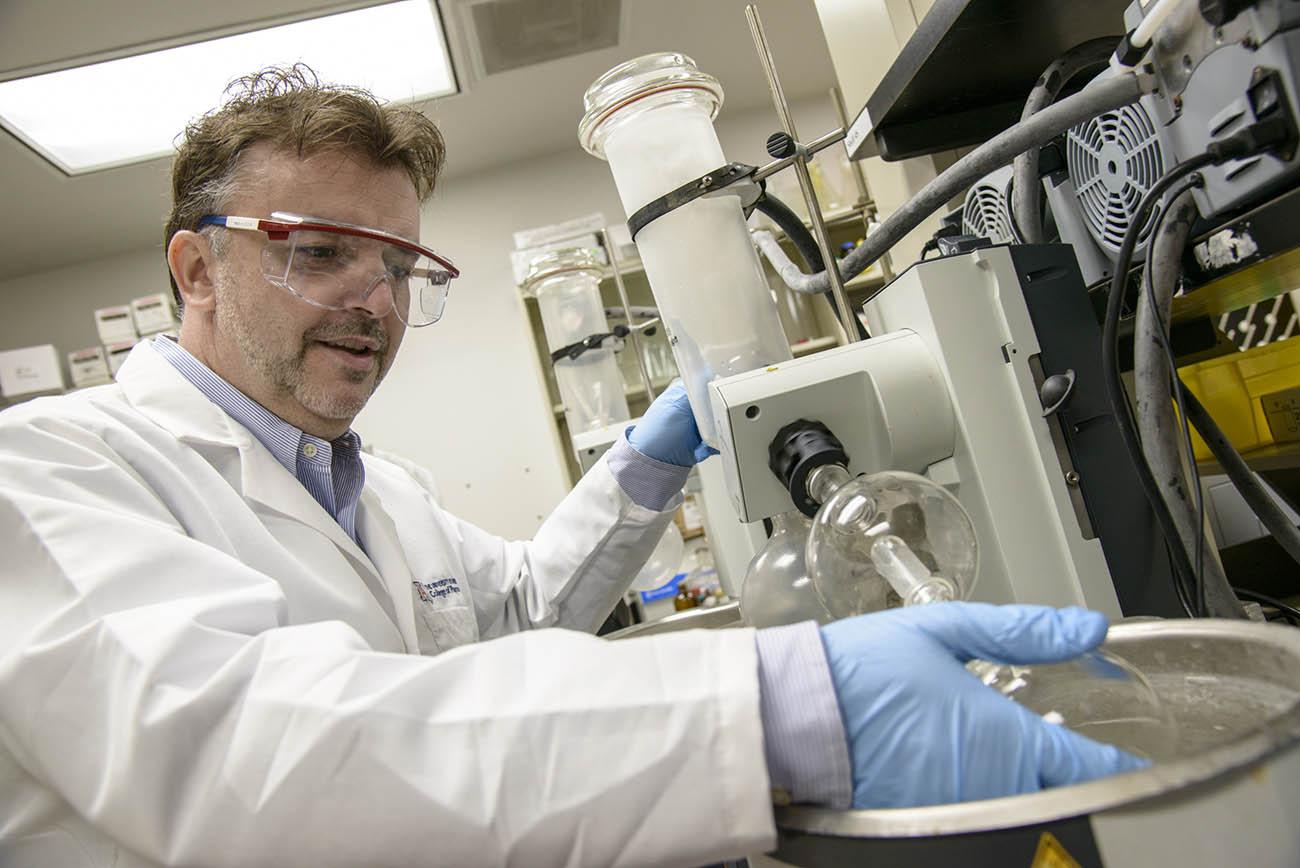 With no known cure, Alzheimer’s disease affects more than 5.5 million people in the United States. The number of people living with the disease, the most common cause of dementia beyond age 65, doubles every five years, according to the U.S. Centers for Disease Control and Prevention. The disorder ranks third, behind heart disease and cancer, as a cause of death in older adults.

In response to this alarming trend, Dr. Hulme’s team has received $3.8 million in federal funding to continue research to develop medications to prevent or reverse the progression of Alzheimer’s disease. Dr. Hulme, who is also a member of the Arizona Center for Drug Discovery and the BIO5 Institute, is principal investigator for the five-year grant from the National Institute on Aging (NIA), part of the National Institutes of Health (NIH).

To hit a target

Plaques in the brain are one of the most salient features of Alzheimer’s disease, and are consistently associated with cognitive decline. But so far, efforts to target these plaques with a drug have been unsuccessful.

The Hulme Lab, in collaboration with researchers at the ASU-Banner Neurodegenerative Disease Research Center, is taking a different approach. Rather than targeting the plaques, which are symptoms of the disease, they’re going upstream. They hope their drug will block an enzyme called DYRK1A (dual-specificity tyrosine-phosphorylation-regulated kinase-1A).

“Our laboratory motto for this project is ‘for the many and the few.’”Chris Hulme, PhD, professor of pharmacology and toxicology

“To date, most Alzheimer’s treatments have focused on addressing only one disease symptom at a time, the most common being the appearance of amyloid plaques, proteins that accumulate in the spaces between nerve cells, which, in a healthy brain, normally are broken down and eliminated,” Dr. Hulme said. “However, our unique approach provides an opportunity to intervene in several areas simultaneously by inhibiting the activity of the DYRK1A enzyme.”

Evidence is mounting that an overactive DYRK1A gene generates a surplus of the enzyme, which leads to plaque formation in the brain. If a drug could nip that process in the bud, plaque formation could be stopped or delayed. And with Alzheimer’s disease primarily affecting older adults, even delaying onset of the disease could dramatically decrease its incidence. Dr. Hulme’s preliminary tests already have shown that blocking DYRK1A causes significant reductions in the decline of cognitive function and the development of the disease.

The DYRK1A gene also is located within chromosome 21, the region in a human cell that results in Down syndrome, when three copies are produced as opposed to the usual two. Most individuals with Down syndrome show early-onset symptoms of Alzheimer’s, and the overexpression of DYRK1A is thought to be a significant contributor to this condition. Studies of Down syndrome in several animal models already have hinted that DYRK1A-inhibition might improve cognition.

To address a challenge

Dr. Hulme’s preliminary studies have demonstrated the feasibility of this approach. With the NIA/NIH funding, his team will seek to develop a treatment in the form of a pill that potentially could both prevent and reverse the disease in advanced-stage Alzheimer’s patients. With funding received last year from Tech Launch Arizona, the UArizona office that commercializes inventions stemming from university innovation, the Hulme Lab has been conducting safety studies of DYR533, their lead drug candidate. 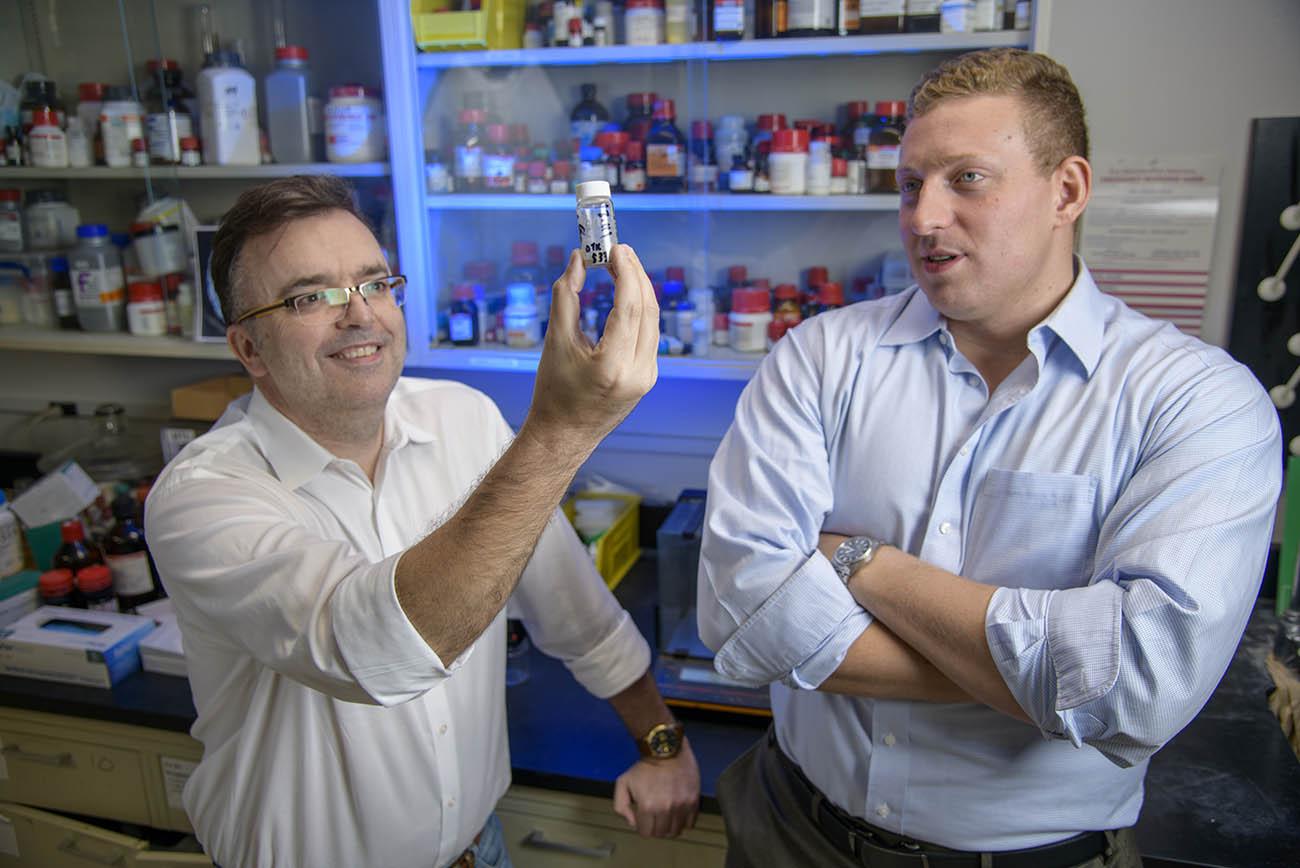 “The progression of our therapeutic toward the clinic is looking good and we are hitting TLA-funded safety milestones,” Dr. Hulme reported.

Hoping to initiate the approval process for DYR533 with the Food and Drug Administration soon, the Hulme Lab team now aims to replicate these preliminary studies in a model of Down syndrome or Alzheimer’s disease.

Dr. Hulme says his team is not daunted by the challenge.

“Our laboratory motto for this project is ‘for the many and the few,’” he said. “By 2050, estimates predict 45 million cases of Alzheimer’s disease worldwide, yet we are loath to forget about lower-incidence diseases that are equally devastating for patients and their family members, such as Down syndrome.”

Other investigators on this NIA grant include Travis Dunckley, PhD, assistant research professor with the ASU-Banner Neurodegnerative Disease Research Center at the Arizona State University Biodesign Institute, and Bill Montfort, PhD, professor in the UArizona Department of Chemistry and Biochemistry and a member of the BIO5 Institute.

Drs. Hulme and Dunckley worked with Tech Launch Arizona to form a startup company, Iluminos Therapeutics, LLC. The team has licensed earlier patents from previous research efforts and may license additional intellectual property in the future. Research reported in this article was supported by funding from the National Institute on Aging, a unit of the National Institutes of Health, under Award No. R01AG067926. Their work was also supported by the Alzheimer's Drug Discovery Foundation and an Accelerate for Success grant from BIO5.

For a more in-depth look at the Hulme Lab’s collaboration with Arizona State University, read an article published in 2019 on Tomorrow Is Here.