Mentor and mentee are hard at work in a Health Sciences lab to show that L-DOPA — used to treat Parkinson’s disease — can delay or prevent the sight-destroying eye disease.
February 10, 2020 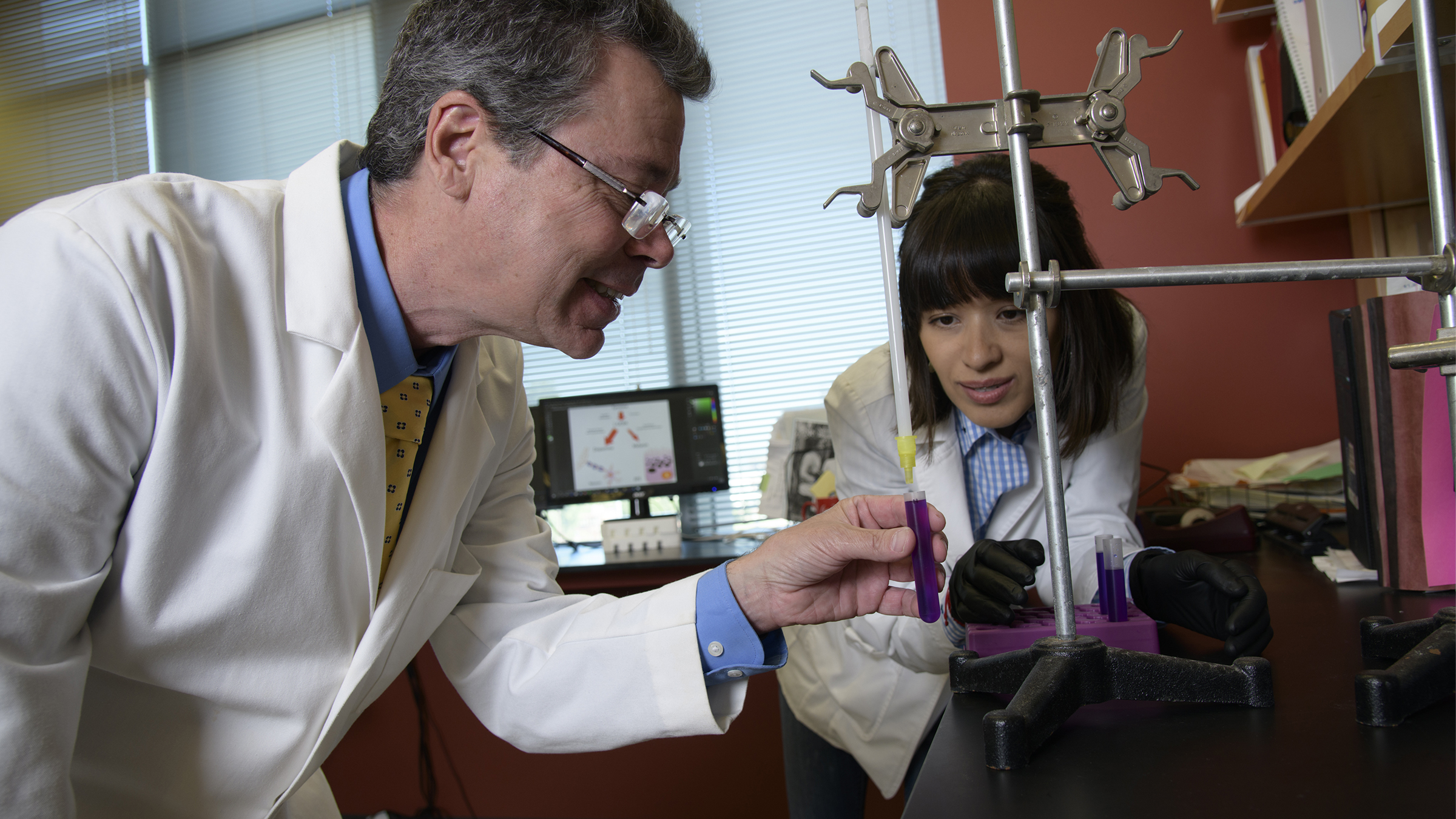 Brian S. McKay, PhD, and his mentee, 2018 UArizona graduate Anna G. Figueroa, investigate better treatments for AMD, the most common cause of blindness in those over age 55.

A better treatment for age-related macular degeneration (AMD) is in sight, thanks to the work of University of Arizona Health Sciences researcher Brian S. McKay, PhD, and his mentee, 2018 UArizona graduate Anna G. Figueroa.

That’s exciting news for the more than 10 million people in the United States who have AMD, the most common cause of blindness in those over age 55. AMD is particularly prevalent in Arizona, where more than 1.2 million people are 65 years of age or older.

People with the degenerative disease of the eye’s retina eventually are unable to see what is directly in front of them.

“Faces are the first thing that individuals with macular degeneration will start to miss because they no longer have central vision,” says Figueroa.

With limited treatment options, many patients whose AMD has progressed from “dry” to “wet” — where abnormal blood vessels grow under the retina — opt for shots in the eye, hoping to prevent further deterioration of their already severely impaired vision. The painful, and expensive, injections must be repeated every four to six weeks. 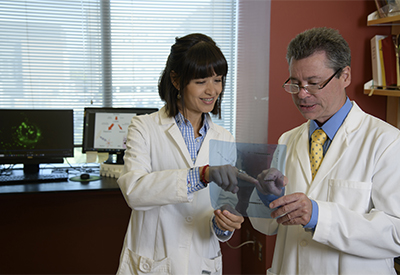 In contrast, a potential treatment for AMD is an inexpensive drug that can be taken by mouth and is used to treat Parkinson’s disease: L-DOPA.

Dr. McKay, professor of ophthalmology and vision science at the College of Medicine - Tucson, discovered that L-DOPA can prevent and delay AMD. L-DOPA is a naturally occurring molecule made in all pigmented tissues, including the retina, where it has a role in maintaining a healthy macula, the part of the eye that provides the most high-acuity, or detailed, color vision.

“AMD is the No. 1 cause of irreversible blindness on the planet, and the current cost of treatment — just those injections — is the second-most expensive thing in the Medicare budget,” Dr. McKay says. “L-DOPA bills are generic and just pennies a pill. I hope to get rid of those shots and give people a pill they can take before they go to bed.”

Guiding students toward the future

Figueroa began working in the McKay Lab as an undergraduate in the summer of 2016 and continues to work there as a research technician, after graduating with a bachelor’s degree in neuroscience and cognitive science and a minor in physiology and anthropology. After completing two research papers, she plans to turn her attention to medical school applications.

“All my students have different paths. My path is to help them get to where they’re going.”
Brian S. McKay, PhD

Dr. McKay trains high-school to graduate students in laboratory research methods and the concepts behind experimental design as they help him research treatment and prevention of AMD and glaucoma.

“My goal is to figure out where the students want to go and help them get there,” says Dr. McKay. “All my students have different paths. My path is to help them get to where they’re going.”

Dr. McKay’s students follow these paths to a wide range of destinations.

“Different students have different goals. In the end, it’s their life and their decisions,” Dr. McKay says. “One just graduated from optometry school, one decided she’s going to do psychiatry, one is a practicing ophthalmologist in Phoenix, for example.”

Taking basic science to the clinic

In the lab, Figueroa and Dr. McKay are investigating pigmentation from tissues involved in AMD.

“A review article on pigmentation, the GPR143 protein and AMD was recently published in a research journal. Brian and I are authors, and we recently submitted an additional article to discuss whether the pigmentation pathway activity in the retina might protect from the observed retinal degeneration in AMD,” says Figueroa.

Many AMD patients opt for shots in the eye, which are painful, expensive, and must be repeated every four to six weeks. To give these patients an alternative, the McKay Lab is investigating an inexpensive drug that can be taken by mouth.

“Anna will go to medical school having published the first prospective data treating AMD with a pill in people,” notes Dr. McKay.

The McKay Lab, located in the Medical Research Building in Tucson, is unique in that it bridges the gap between basic laboratory sciences and clinical studies. In addition to research, Figueroa is collaborating on three clinical trials to test the effect of carbidopa-levodopa, an FDA-approved combination drug for Parkinson’s, on AMD. 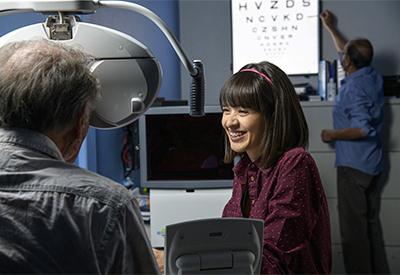 The studies are aimed at determining if the drug stops the progression of AMD, reduces or prevents the need for eye injections in newly diagnosed wet AMD, and stops or reduces the progression of geographic atrophy observed in late-stage dry AMD, when retinal cells die in a pattern that resembles a map.

“Being part of the clinical trial has allowed me to see the impact that our research has on people,” Figueroa says. “It’s been an incredible experience. One of my patients sent me a digital book of her painting work, and at the end of her email, she said, ‘This disease is not going to stop me, and thanks to you and Dr. Snyder, I have hope.’”

Dr. McKay sums up his wishes for the future of his research: “We can change the world.”

The ongoing clinical trials in Tucson are recruiting; individuals who would like to participate should contact Snyder Eye Doc or the McKay Lab.