The Path to an Alzheimer’s Drug: Visualizing the Brain 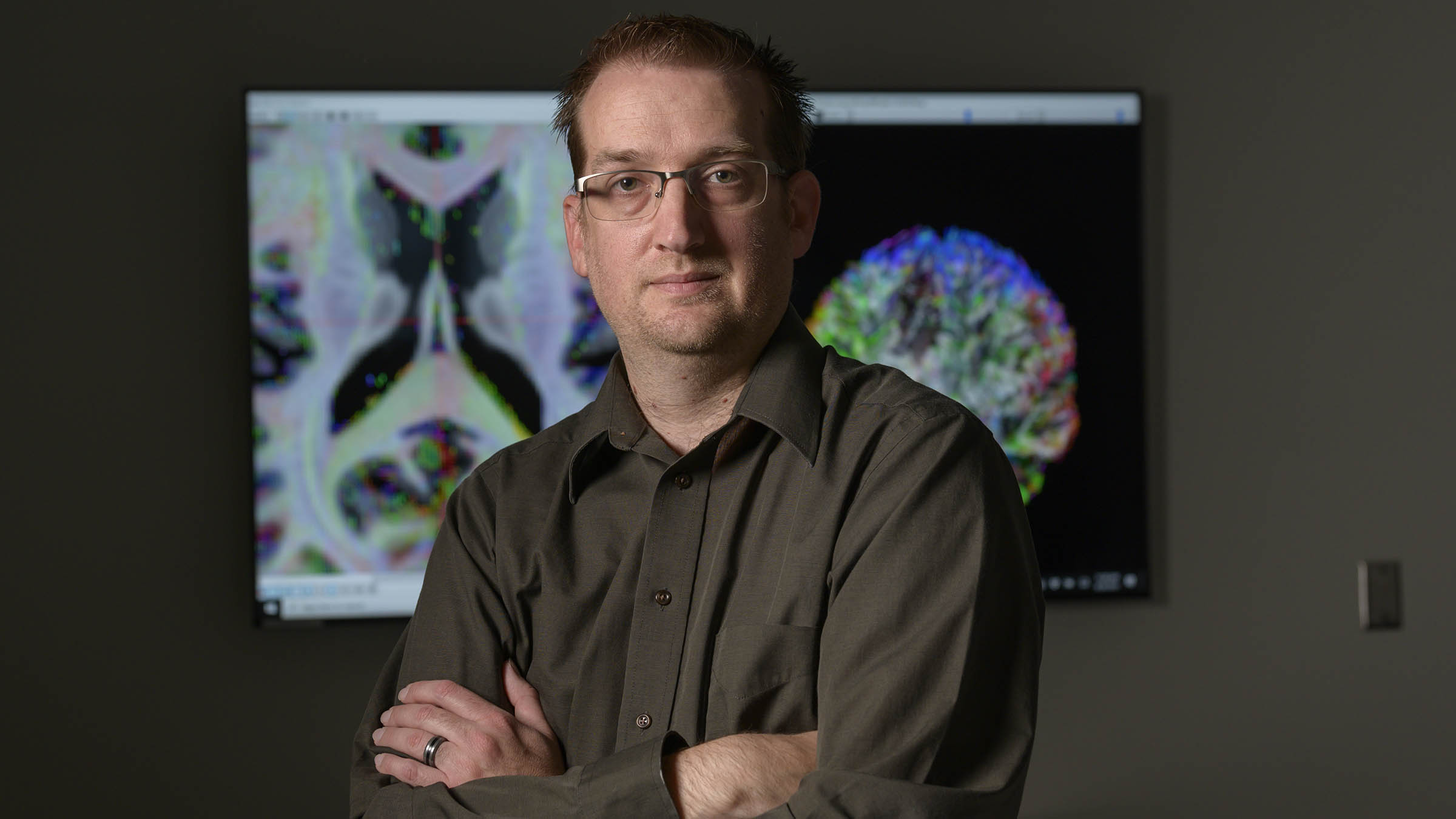 By mapping out the nerve fibers that traverse the brain, Dr. Adam Raikes illuminates this normally unseen part of the anatomy for scientists devoted to treating neurodegenerative diseases.

The Path to an Alzheimer’s Drug: Visualizing the Brain

When Adam Raikes, PhD, meets someone new, he’s inevitably asked about his job. He may tell them he’s an assistant scientific investigator at the University of Arizona Health Sciences Center for Innovation in Brain Science (CIBS). Pushed for more details, he might say he processes, reconstructs and analyzes raw data from brain MRIs. If they respond with a blank stare, he’ll take out his smartphone and show them an image: wisps of multicolored fibers arrayed in the shape of a brain.

In Dr. Raikes’ case, a picture really is worth a thousand words.

“That’s typically sufficient,” he said with a wry smile.

At his computer, Dr. Raikes spins the bits and bytes from an MRI data file into stunning rainbow images of brains. By giving researchers a glimpse inside, he helps them figure out what’s going wrong in brains affected by Alzheimer’s and other neurodegenerative diseases — and how to stop it.

A 7-tesla MRI machine is housed in the basement of the Bioscience Research Laboratories on the Health Sciences campus in Tucson. The MRI units most of us are familiar with are 1.5 teslas — a unit of measurement referring to the strength of the magnet — making the 7-tesla MRI uncommonly powerful.

“We’re relying on how water diffuses in the brain to give us structural information,” Dr. Raikes said. “We use the magnet to push the water in one direction and another. You need that kind of force to move water in the brain.”

This method, called diffusion weighted imaging, gives him a peek at the brain’s interior structure, illustrated by 3D representations of nerve tracts carving myriad neural pathways through the brain. 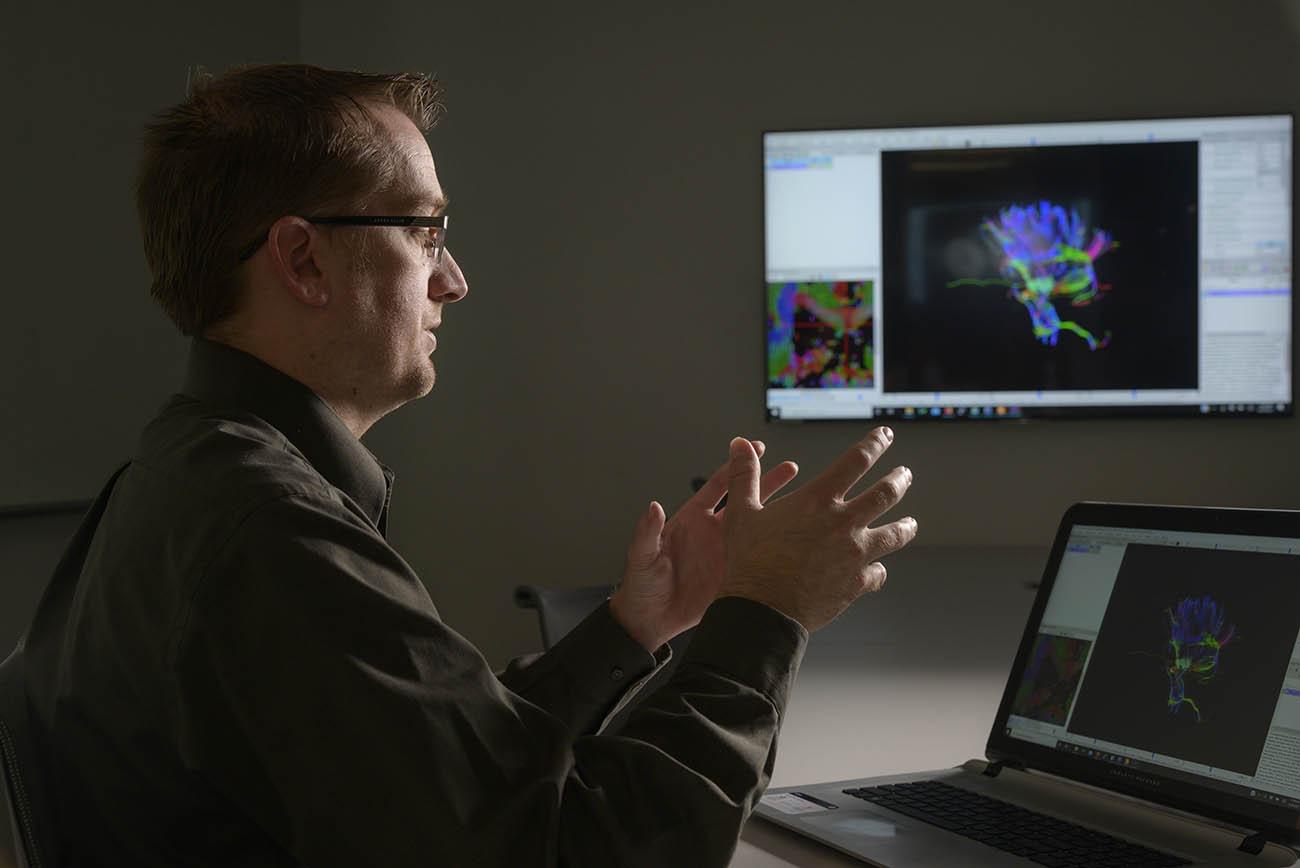 Though he creates intimate images of normally unseen parts of the anatomy, Dr. Raikes never touches a single patient: He’s the black box that takes the raw, grayscale data captured by MRI technicians and transforms it into vibrant imagery that bursts at the seams with clues about the inner workings of the brain.

“I’m more of the back-end guy, a computers and numbers guy,” he said. “My days are spent writing code. There’s a lot of under-the-hood computation that goes into that.”

His deep expertise in human brain imaging allows researchers to determine the size and volume of important areas of the brain, such as the hippocampus, a seahorse-shaped structure nestled deep in the brain integral to learning and memory. In people with Alzheimer’s, the hippocampus gets smaller as the disease progresses, leading researchers to search for ways to protect it.

“The goal is to reverse hippocampal atrophy and identify therapeutics that undo the damage,” Dr. Raikes said. “But, even if we may not be able to reverse Alzheimer’s, we may be able to slow that progression such that you still get a ‘normal’ life.”

Dr. Raikes’s work has applications for other age-associated neurodegenerative diseases, and it supports the investigations of CIBS scientists who hope to translate what they discover in the laboratory into next-generation treatments for Alzheimer’s disease, Parkinson’s disease, multiple sclerosis and amyotrophic lateral sclerosis.

Dr. Raikes did not expect to be creating images of brains for a living.

His journey began at the University of Arizona, where he “danced around some majors” before zeroing in on sports medicine. He completed his undergraduate degree at Temple University and his master’s degree at Utah State University, set on becoming an athletic trainer. That’s where his career trajectory took its first sharp turn. 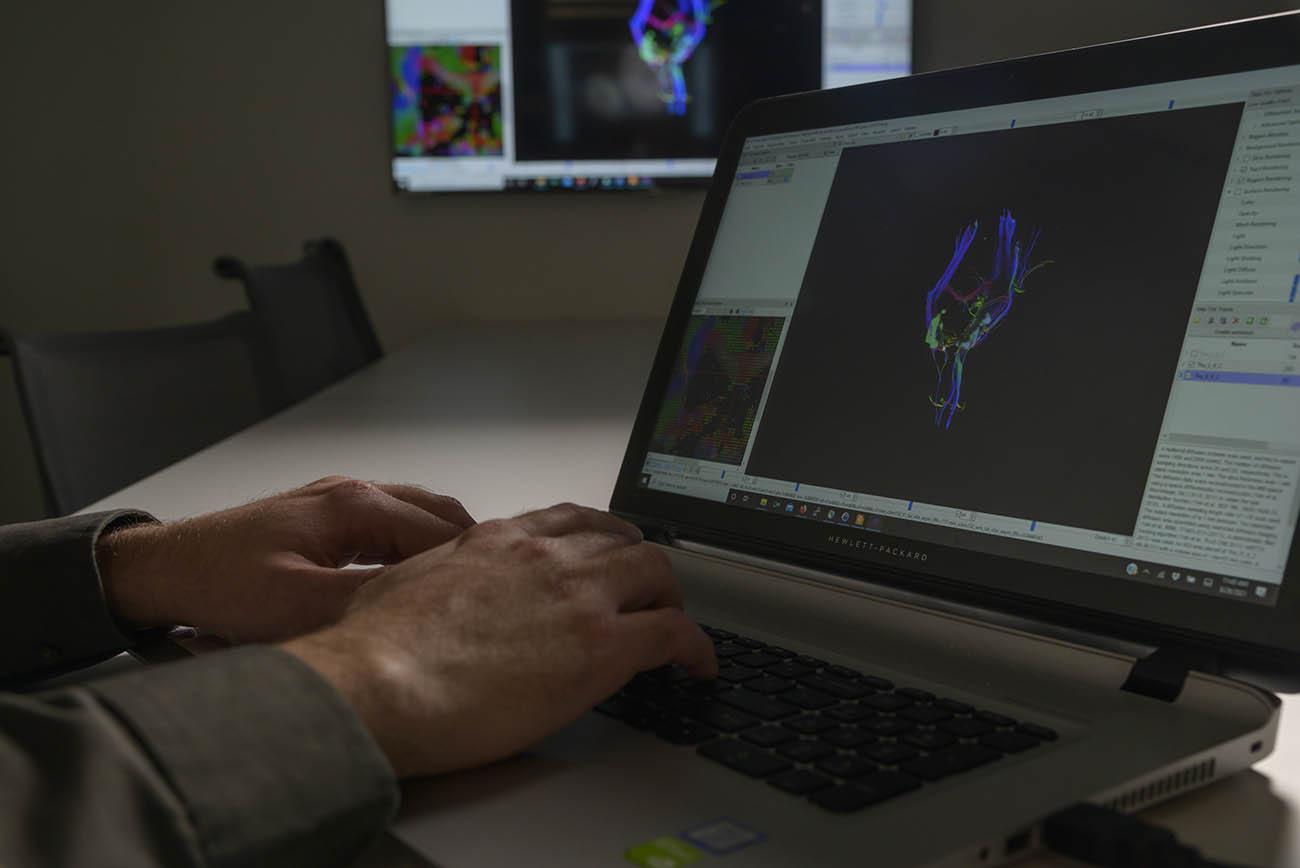 It turned out that his department was launching a doctoral program, and they wanted him to stick around to be one of its first graduates. He earned his doctorate with research on the relationship between sleep and concussions.

His career took a second sharp turn when an unexpected opportunity brought him back to his hometown for a postdoc position.

“Being from Tucson, I’d always looked at the University of Arizona,” Dr. Raikes said. “We don’t have any academic programs in sports medicine, but to humor people, I checked, just to say I had looked.”

His attempt to placate his family members landed him a fulfilling job at the SCAN Lab, working with Scott Killgore, PhD, professor of psychiatry at the College of Medicine – Tucson, investigating blue light therapy to improve sleep after a concussion.

“In the three-and-a-half years I worked in Dr. Kilgore’s lab, I learned all I know about imaging,” Dr. Raikes said. “It wasn’t something I was anticipating, but it was a cool extra feature to that job.”

“It’s been a lot of turns to get to this position, where I can work on something that matters.”Adam Raikes, PhD

After gaining a reputation for his imaging talents, Dr. Raikes was recruited to work at CIBS. He says it’s not a position he would have thought to pursue on his own.

It might not have been the journey he expected, but it was the natural result of being open to where life took him.

“Things have been put in my path,” Dr. Raikes said. “I was expecting to stay in athletic training and be on the sidelines of sports. It’s been a lot of turns to get to where I am, but all of them have built on each other to put me in this position where I can work on something that matters.”

At CIBS, Director Roberta Diaz Brinton, PhD, is investigating an intriguing compound called allopregnanolone — allo for short — that is used to treat postpartum depression. After positive preclinical results, her lab completed early-phase clinical trials in humans in the hopes that allo could slow or even reverse Alzheimer’s progression.

“When I came to CIBS last year, one of my first tasks was to look at that imaging data and determine what we could draw out of the data set,” Dr. Raikes said. “There are some indicators of potentially positive effects from this very small trial — enough for us to go ahead with a Phase 2 clinical trial — to investigate whether allo can change biology, cognition, memory and things like that.”

When the Phase 2b trial gets underway, participants with mild Alzheimer’s disease will receive either allo or a placebo, and will be followed over time. Each scan, taken three months apart, will be a snapshot in time. The hope is that these snapshots will tell a story: In participants taking allo, the hippocampal volume will be more stable, losing less volume over time compared to those taking a placebo.

“A slowing, a cessation or even a reversal of hippocampal atrophy would be the biophysical marker indicating allo has accomplished its goal,” Dr. Raikes said. “Secondarily, if we can stop, slow or reverse cognitive decline, I would say we accomplished a bigger goal.”

With Alzheimer’s symptoms emerging anywhere from a person’s 30s to mid-60s, the disease has the potential to rob a patient of years, even decades, of quality of life. An effective treatment for Alzheimer’s is the proverbial pot of gold at the end of the rainbow.

“If allo is successful, we can change the trajectory for what could be up to half of Alzheimer’s patients’ lives,” Dr. Raikes said. “If we can identify therapeutics that do what we anticipate they’ll do, and we can identify the people who need them, and we can get it to them early, we’ll have the opportunity to potentially change lives. That’s incredibly beneficial.”