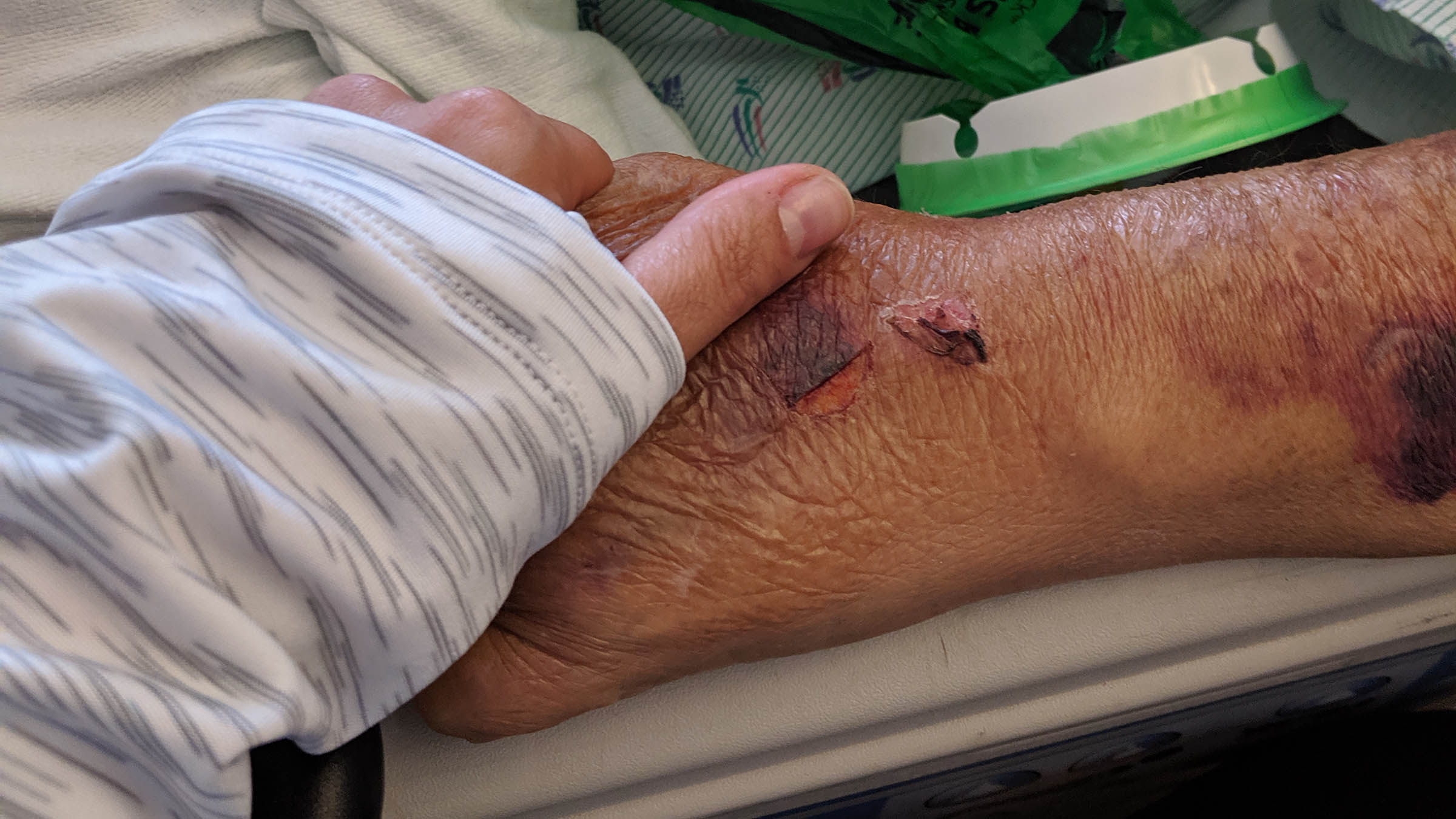 Tara Sklar, professor of health law and director of the Health, Law and Policy program at the University of Arizona James E. Rogers College of Law, holds her father’s hand for the last time while he was in hospice. (photo courtesy of Tara Sklar)

It isn’t often that on your ninth birthday your life completely changes. But that was the day Tara Sklar’s future began to take shape. She experienced an overwhelming moment of having no control over what was happening to her, and it set her on a path to becoming who she is today. 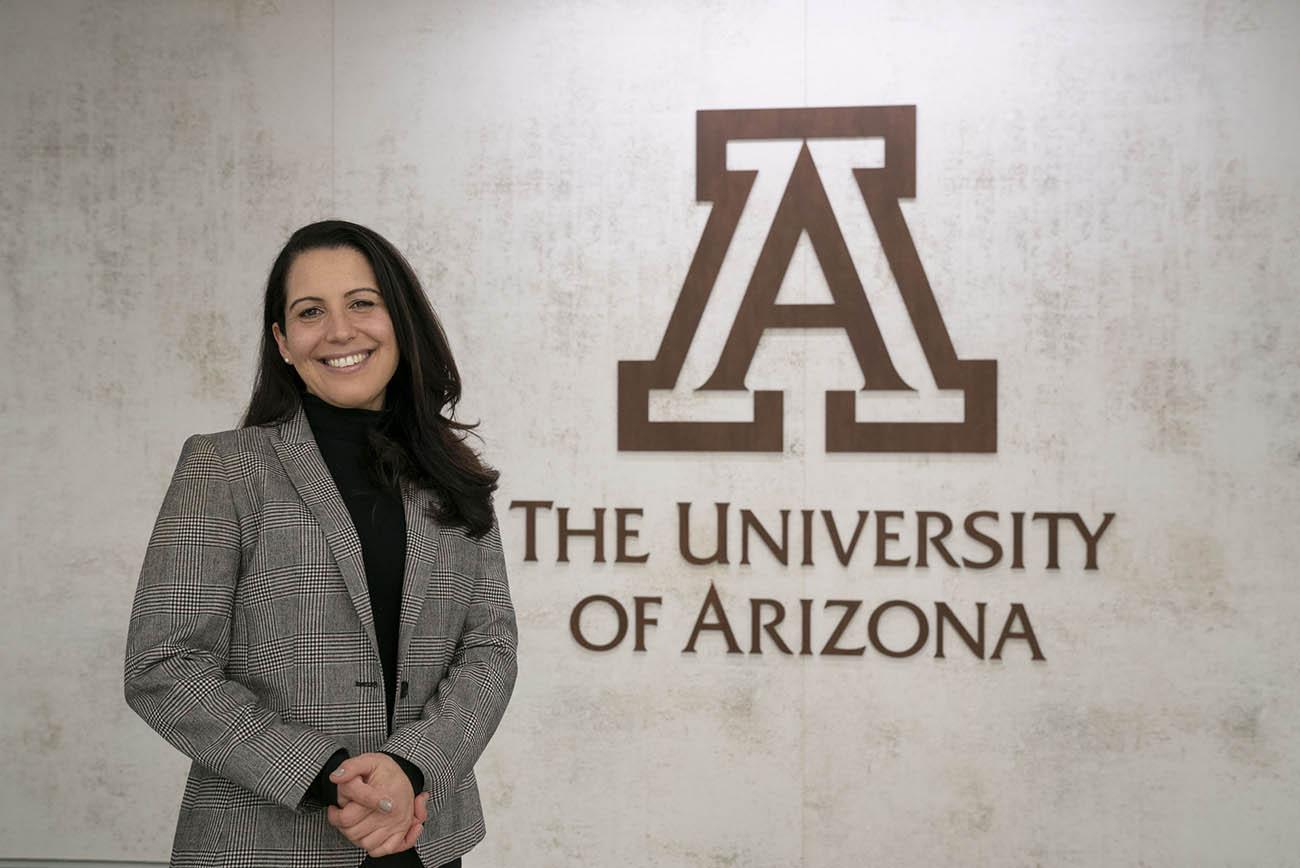 As a child, Sklar’s health condition was a conundrum to her parents and physicians in the military hospital system. She would present with bruises and fatigue that caused doctors to question her safety. On her ninth birthday, she was briefly separated from her parents because the physicians caring for her feared she was being abused.

The event was traumatizing, Sklar said. “My parents didn’t know what was happening, that maybe my older brother was hurting me or maybe a neighbor or someone at school. Similar to many people with internal bleeding, I couldn’t explain when or how the bruises appeared.”

While the temporary separation from her family that day was distressing, the two years of trauma that followed ‒ as she underwent numerous medical tests and treatments ‒ were momentous.

“That time framed all of my decisions when it came to my education and what I wanted to study, who I wanted to be and how I wanted to spend my life,” she said. “As my career progressed, I always wanted to make sure patients and patient advocacy became core to my teaching, to my research and to my engagement with the health care system in a way that I wouldn’t understand if I hadn’t personally had a serious health issue at that impressionable age.” 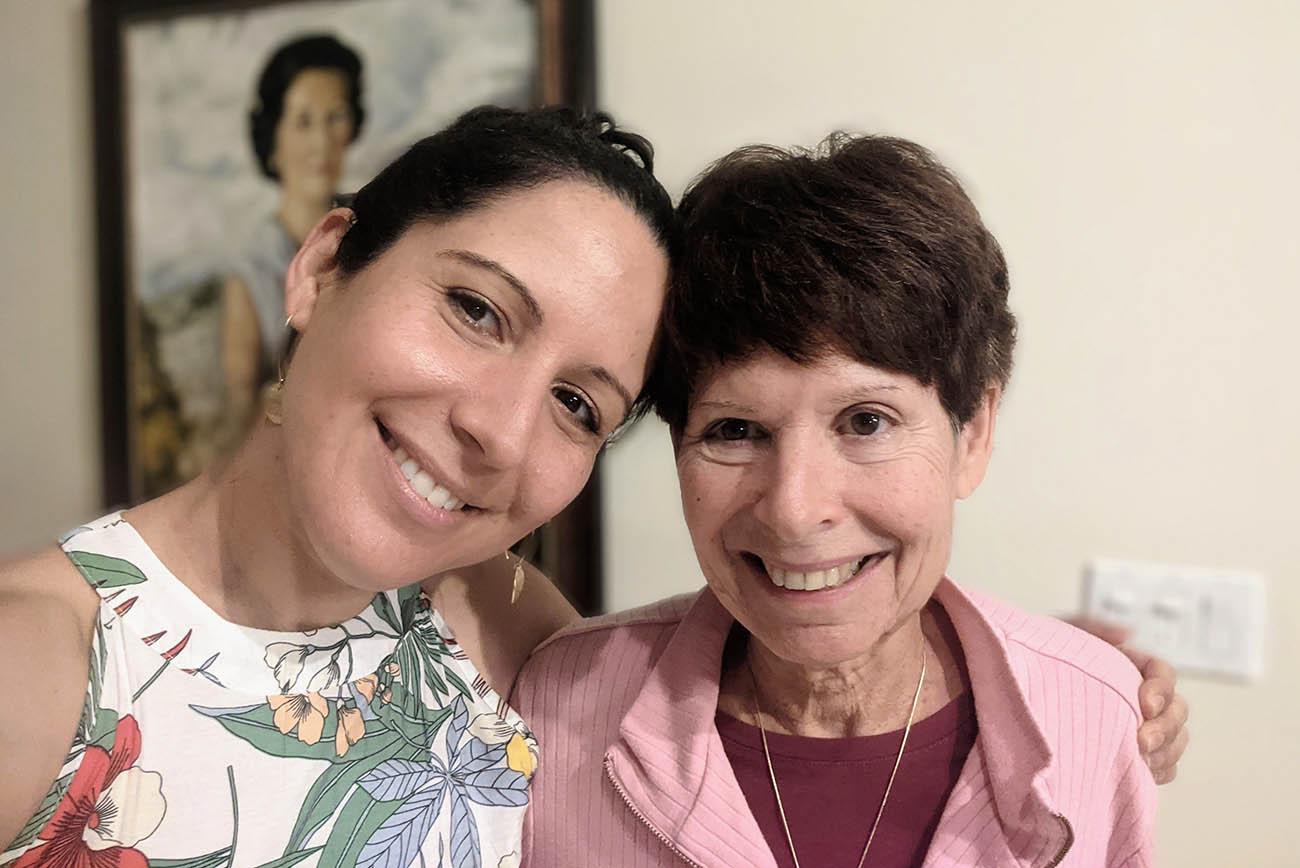 Sklar, a professor of health law and director of the Health, Law and Policy program at the University of Arizona James E. Rogers College of Law, works closely with Health Sciences as a senior faculty advisor for the Innovations in Healthy Aging strategic initiative. She also works with the College of Medicine - Tucson with the Arizona Telemedicine Program and the Southwest Telehealth Resource Center, and she is an affiliate faculty member at the Mel and Enid Zuckerman College of Public Health with the Applied Health Policy Institute.

“I lost two years of my childhood, ages 9 to 11, and experienced many upsetting moments due to the illness,” Sklar said of her early experience with the health care system. “At points I couldn’t leave the house without wearing a helmet, just to make sure I wouldn’t suffer a  brain injury if something happened to me. I missed tons of school and constantly felt behind and weak. I spent an enormous amount of time in the hospital over that period.”

Mystery solved by flossing her teeth

During this time, a doctor in the military hospital where she was being treated asked her to do something she thought was random, but which turned out to be the most important action anyone had taken to that point. He asked her to floss her teeth.

“I went to floss, and all this blood came gushing out. The doctor ordered a blood test, and then discovered that I had a very low platelet count,” she said. That simple act of flossing combined with the blood test showed she had immune thrombocytopenic purpura, or ITP, a disorder that results from the immune system destroying platelets in the blood. 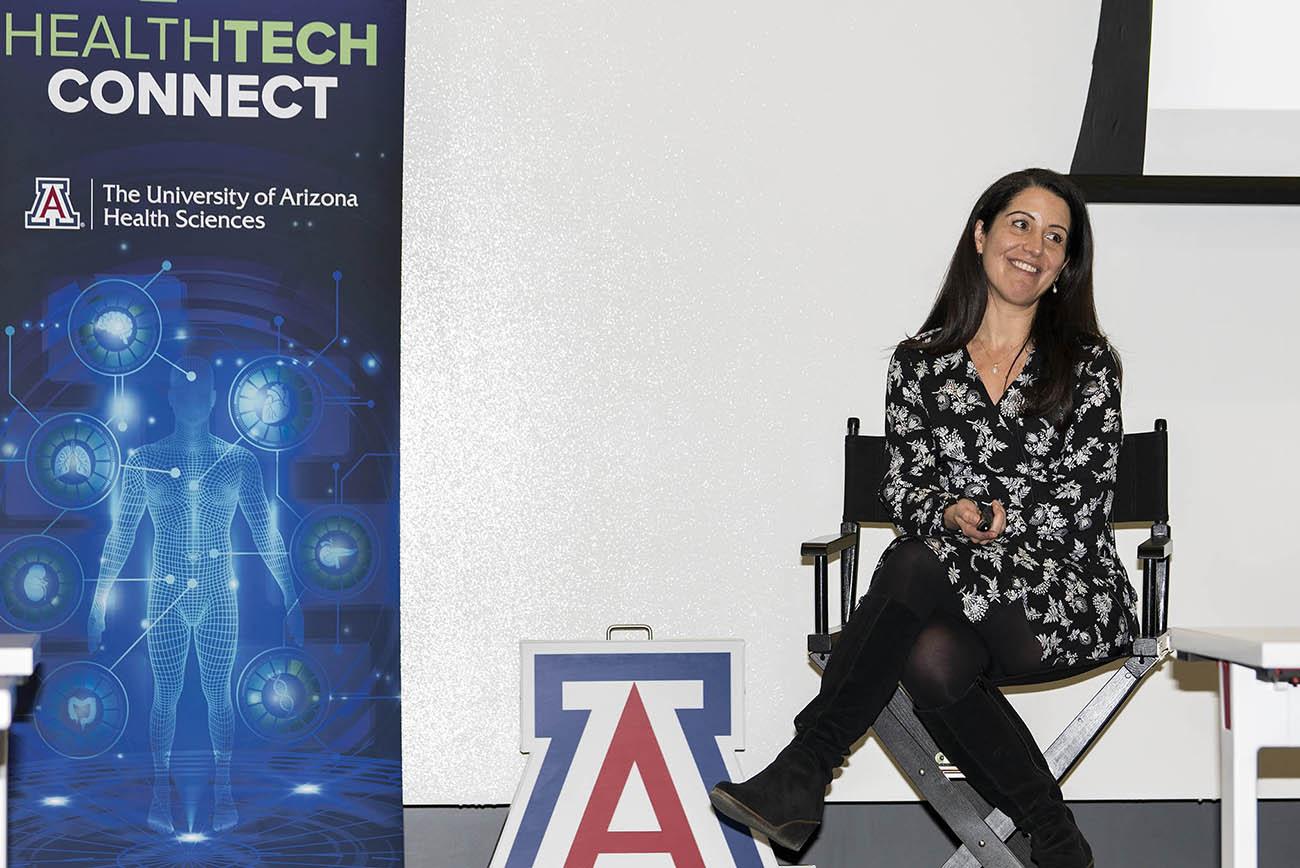 “The doctors told my family that my platelet count would likely improve with treatments, including prednisone, chemotherapy and regular treatments of intravenous immunoglobulin therapy, but nothing worked. I would have bloody noses that would go on for hours, and I would have to be admitted to the hospital. Many horrible events occurred regularly because I had such a low platelet count, because my blood wouldn’t clot,” she said.

After two years of failed treatments, relative isolation from other children and adults, and many scary moments, a splenectomy was ordered. Within three days of that operation, her platelet count was normal. It has been ever since.

“At no point in this entire experience did anybody ever say, ‘Maybe we should ask the patient how this illness and these treatments are impacting her life and development?’” she said. “The vast majority of the time no one really spoke to me, but they spoke to my parents even though I was able to comprehend.”

“One day, I was chatting with a nurse and she said, ‘I bet you’re going to want to be a doctor or a nurse one day because you spend so much time with us.’ I remember looking at her, looking down at my IV that had been in for days, and softly, but clearly stating, ‘No, I am going to be an advocate for patients.’”

From patient to patient advocate

“She is well-informed and creative in her approach to addressing our community needs in relationship to law and aging,” said Kathleen Insel, PhD, RN, chair of the Biobehavioral Health Science Division in the College of Nursing, and director of Health Sciences’ Innovations in Healthy Aging initiative. “For example, her awareness of and ability to articulate concerns of older adults and digital privacy.”

“One day, I was chatting with a nurse and she said, ‘I bet you’re going to want to be a doctor or a nurse one day because you spend so much time with us.’ I remember clearly stating, ‘No, I am going to be an advocate for patients.’”Tara Sklar

Sklar’s path to advocating for older adults was not direct, however. She said as an undergraduate she was interested in public health, and then in graduate school, in workforce shortages in the medical field. “The focus in preparing future health care professionals is generally not on geriatrics, even with a growing aging population. I want to help change that, and educational training is key,” she said.

Sklar said there are issues with treating older adults that are similar to what she went through as a child, where health care providers may not speak directly to the patient because it may be difficult to communicate due to hearing loss or cognitive impairments. So health care providers speak to the caregiver who may also be a family member.

“Tara Sklar brings a particular perspective to the aging initiative given her expertise in aging and the law, her background working with community groups, her location in the Washington, D.C., area with her links to foundation and government activities,” said Dr. Insel.

Sklar said her work emphasizes “the importance of the patient’s voice, and with giving patients an opportunity to provide meaningful consent by understanding the treatment options and their benefits, harms and alternatives, which is extremely valuable, especially as people live longer and need greater care.”

Sklar’s journey took her halfway around the world, to Melbourne, Australia. While teaching at the School of Population and Global Health at the University of Melbourne in 2015, Sklar was approached by the provost about launching a new degree program called the Master of Aging. The cross-disciplinary program expanded aging beyond the gerontology/social work/nursing/geriatrician realm and added law, business, the arts and architecture into the mix as part of a comprehensive approach to aging.

The concept wasn’t an instant best seller. “I remember going to my first university event while I was pulling this together, and other people at the University of Melbourne asked, ‘What are you working on?’ And I told them a degree about aging and ‒ these are professional academics ‒ they all started laughing. They thought it was a joke,” she said. “But people in the aging field took the new degree program very seriously and were waiting for it. They received immediate support from businesses, consultants, tech firms and government officials, among others.”

When she moved back to the U.S. and the University of Arizona, she worked on a paper with Dr. Insel and Richard Carmona, MD, MPH, FACS, laureate professor of Public Health, Health Promotion Sciences, and Community, Environment and Policy in the College of Public Health. The paper combined some of the work she had been doing on aging in the home, privacy and consent, entitled, “Digital Health Privacy in Active-Aging Settings: Will the Law Let You Age Well?”

“That article and subsequent conversations about building a healthy aging curriculum at UArizona Health Sciences and UArizona is very exciting. Aging is an issue that goes beyond individual colleges and impacts us globally,” she said. “Everything we're trying to accomplish with this new initiative are things that no one was really thinking about, in the same way and in the same comprehensive approach that we're doing now. I have seen such progress. And it's very inspiring to me.”

“We’re all getting older ‒ that’s part of living. But experiencing fear and helplessness in navigating the health system should be something we all fight against,” she said. “We should all be advocates.”