Some of the first students in an innovative University of Arizona Health Sciences drug-discovery course have Alzheimer’s disease in their crosshairs.
May 25, 2021 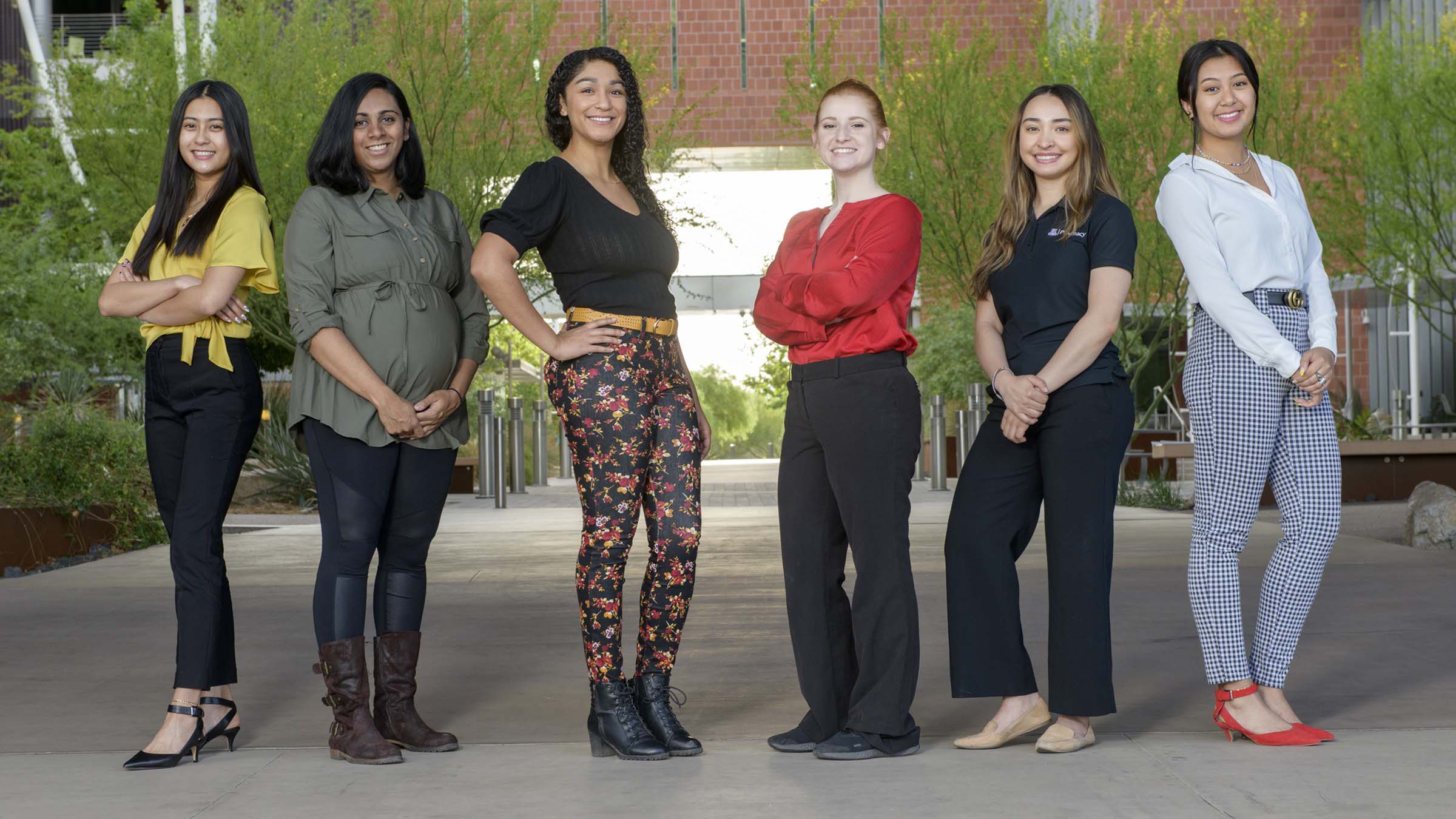 One of health care’s most vexing challenges is Alzheimer’s disease, a neurodegenerative disorder that can cause dementia, memory loss and personality changes. Drugs treat symptoms, but there is no cure. At the University of Arizona Health Sciences, recent College of Pharmacy graduates are working to change that with a startup they named Cliacept. 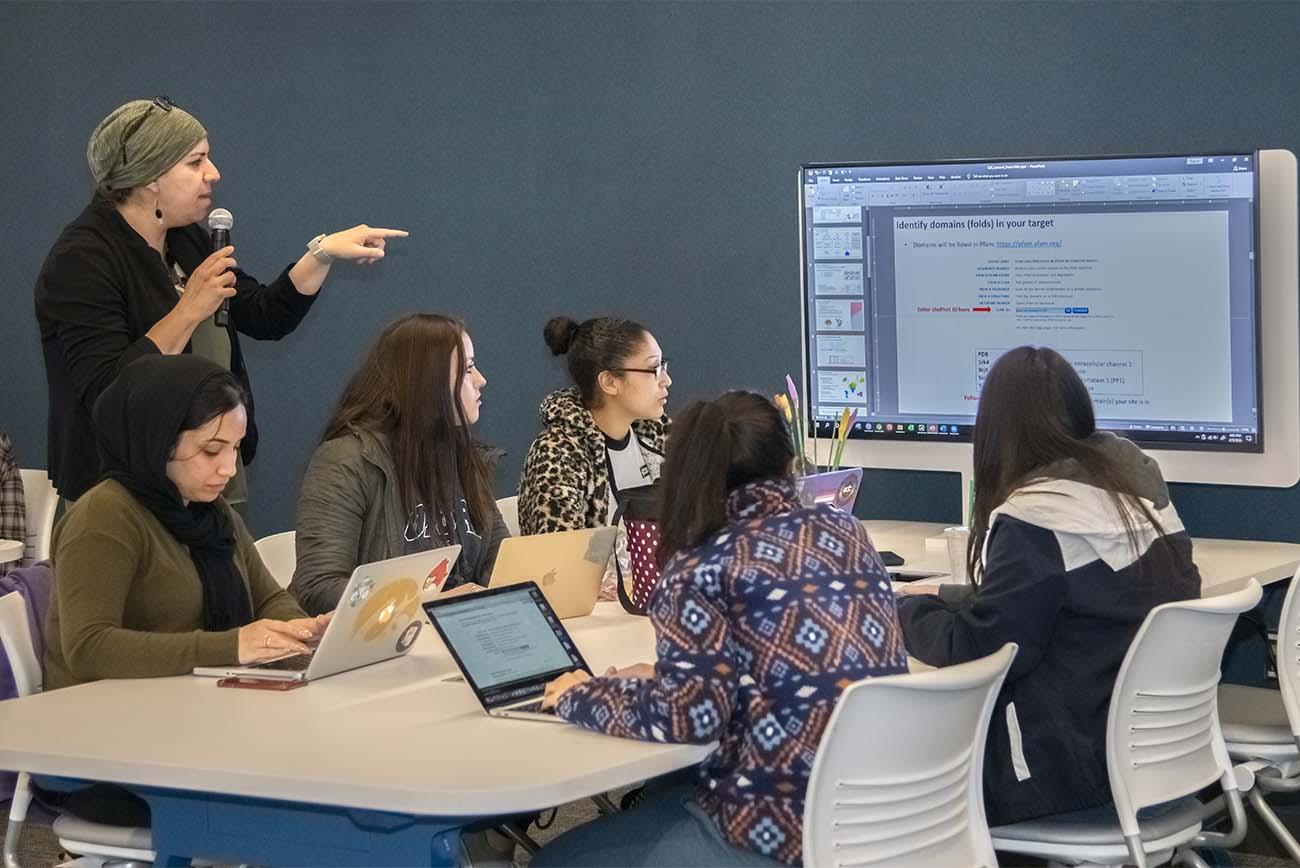 Cliacept Inc. was conceived in spring 2020 during the inaugural semester of Designing Drugs: From Chemistry to Cure by members of the first graduating class of the Bachelor of Science in Pharmaceutical Sciences program. They dove headfirst into drug discovery, learning about both the science that powers it and the business side that keeps it afloat.

This first-of-its-kind course is the brainchild of May Khanna, PhD, assistant professor of pharmacology at the University of Arizona College of Medicine – Tucson and member of the Center for Innovation in Brain Science (CIBS). While Cliacept is the first startup to emerge from this capstone course, she is confident it won’t be the last.

“It’s such a visionary course, because it gets them to create new entities, new chemicals, new ways to look at targets. The students own the intellectual property, and they drive their project,” Dr. Khanna said. “Every year should yield a new company!”

Jaesa Strong, who delayed graduate school to become Cliacept’s first chief executive officer, views the search for a better treatment for Alzheimer’s as more than a fascinating scientific puzzle. For her, it’s also personal.

“My great-grandmother had Alzheimer’s disease. Every time we would see her, I would worry, ‘Is she going to remember us? Is she going to be afraid of us?’ It was the saddest thing ever, seeing her slow progression,” she recalled. “I never want to see someone go through that for themselves or their family members. Hopefully someday that will be changed, and I’ll be a part of that change.”

Not only is there no cure for Alzheimer’s disease, there is no clear cause, either. The inability to identify the condition’s root cause complicates the search for ways to prevent, reverse or cure the disease.

“I have faith in our drug candidate, and for the good of society, I hope that it works.”Christina Moehring, Cliacept CSO and rising second-year PharmD student

“Alzheimer’s is a mystery disease,” said Christina Moehring, Cliacept’s chief scientific officer and rising second-year PharmD student. “There’s no known cause, so we really don’t know where to start.”

There are some clues, such as the buildup of telltale “plaques and tangles” in the Alzheimer’s brain, but drugs that shut down production of these proteins and clear away what remains have so far failed in clinical trials.

Scientists are testing alternate hypotheses, and some are turning their attention to immune cells called microglia, “housekeepers” that move through the brain sweeping away cellular debris — including plaques.

As an investigator at CIBS, Dr. Khanna has access to the center’s resources to provide a strong foundation for her innovative course.

“Being part of the center has opened up so many doors for me,” Dr. Khanna said. “When you have the support of your director and colleagues, and access to incredible technology, it culminates in a really creative environment.” 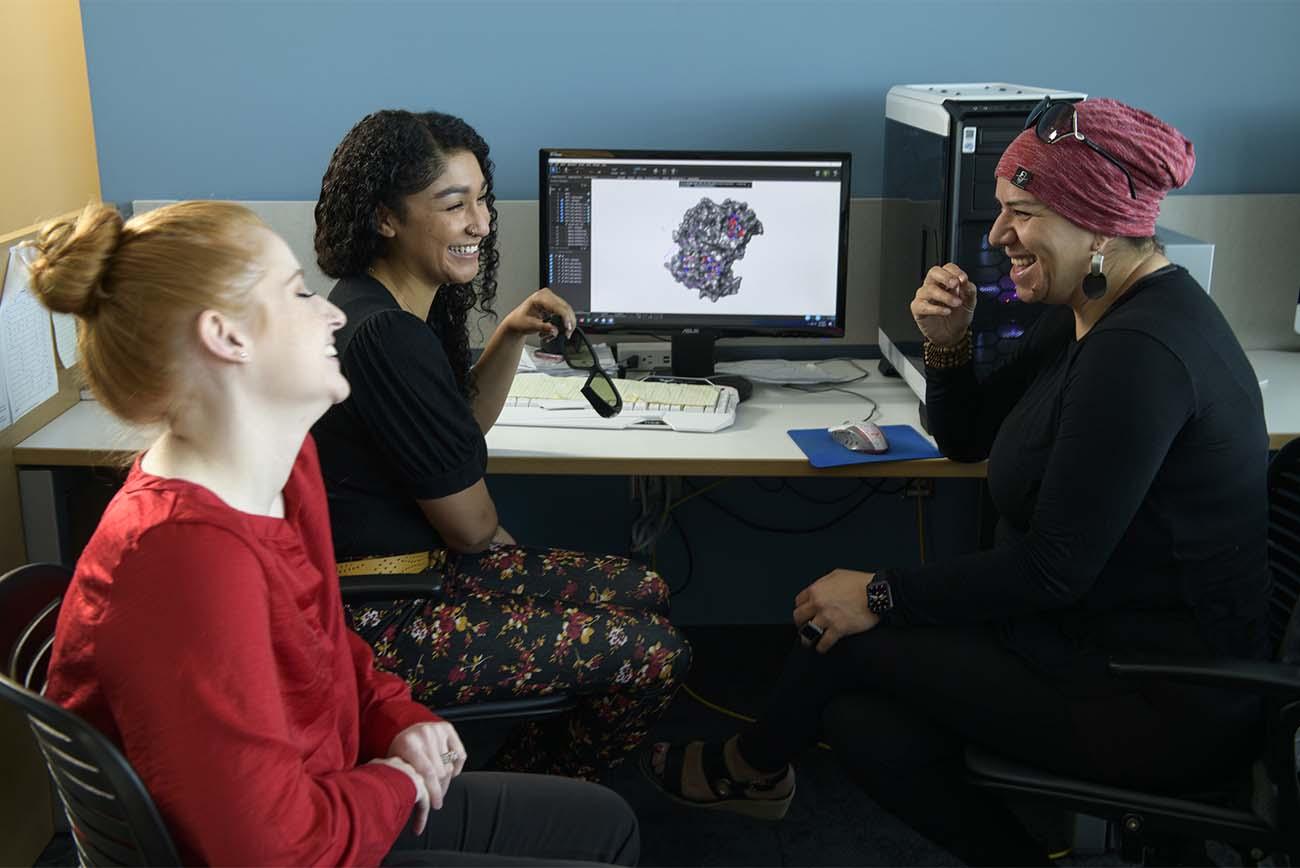 At CIBS, Dr. Khanna also was involved with a National Institutes of Health initiative called Accelerating Medicines Partnership Alzheimer’s Disease, which gave her students access to a list of potential drug targets — proteins such as receptors poking through diseased cells’ surfaces that can be disabled when drug molecules bind to them. Strong imagines finding the right key to fit into a lock.

“Think about the lock as the target. The keys were the library of molecules,” she said. “We had to figure out on our own, through trial and error, where they bind best.”

Students hit the ground running, using 3D modeling software to visualize a potential drug target undulating on the computer monitor in unison with tiny drug molecules. The potential targets and drugs dance with one another until they find the right orientation for the drug to nestle into the target.

“The first cohort had completely unique targets that no one in the world knew about except people studying this through NIH,” Dr. Khanna said. “It was completely on the students to choose their target, because I want them to be the discoverer.”

Rather than taking the well-traveled road to shut down plaque production, the Cliacept team is focusing on microglia, hoping that if the housekeepers stay healthy, the brain will be kept neat and tidy. They homed in on an especially compelling target known as CLIC-1. 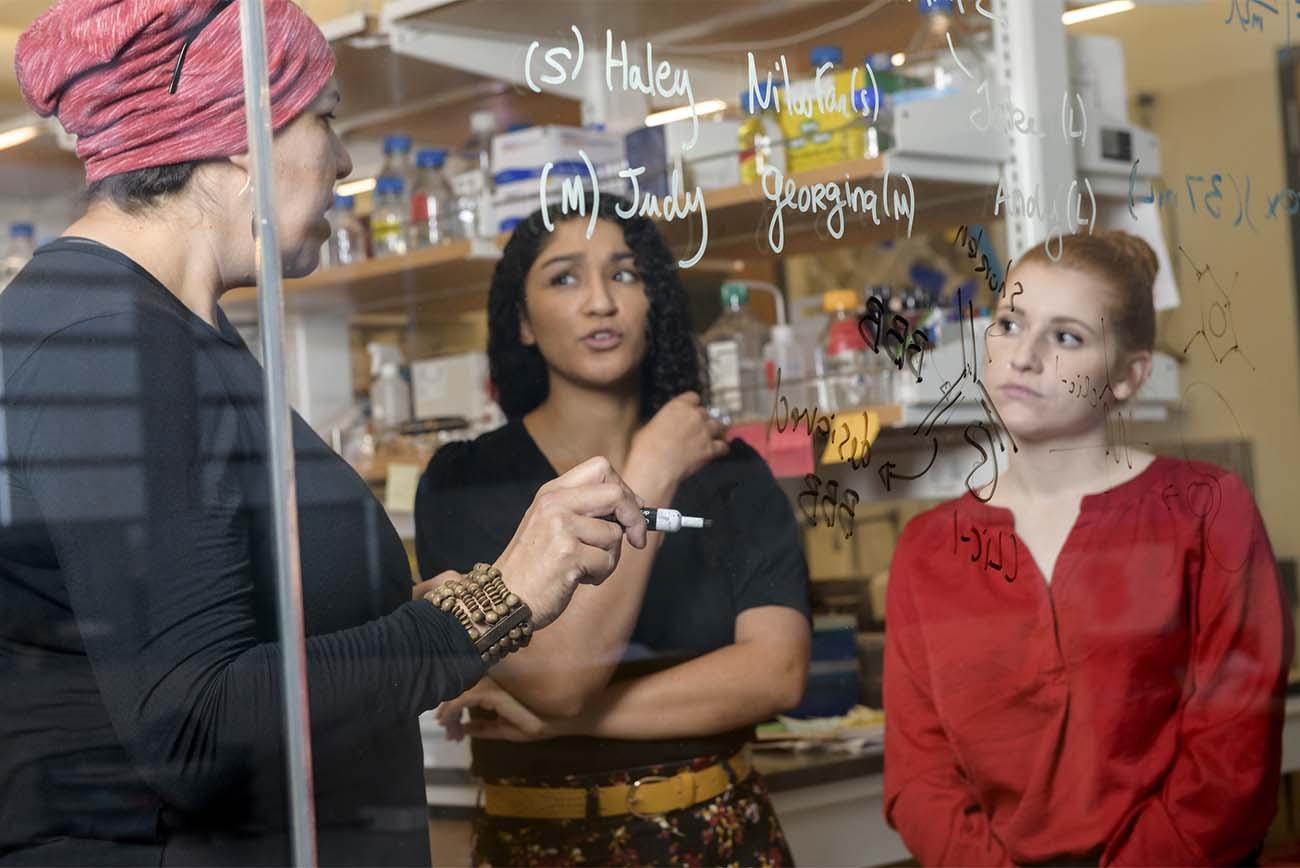 CLIC-1 is a gateway that controls the movement of chloride in and out of a microglial cell. In Alzheimer’s disease, CLIC-1 is overproduced, riddling the surfaces of microglia with chloride channels spewing an excess of the chemical, triggering inflammation.

“Normally, CLIC-1 is found inside microglia. In Alzheimer’s, CLIC-1 is expressed more on the surface of the cell, pushing chloride into and out of the cell and creating an imbalance,” Moehring said. “That ultimately leads to the release of neurotoxins, killing the cells nearby.”

If all goes according to plan, the drug will intercept CLIC-1, shutting it down to restore the chloride balance and stop inflammation. (Cliacept derives its name from their target and proposed mechanism of action.)

“Our goal is to bind to the CLIC-1 protein on the membrane and inactivate it,” Moehring said. “That way, the cell can’t fire out these neurotoxins, and we will decrease inflammation in the brain and progression of the disease.”

Best of all, CLIC-1 would be targeted with a drug in the form of an antibody, a protein that is normally custom-made by the immune system to fight disease. 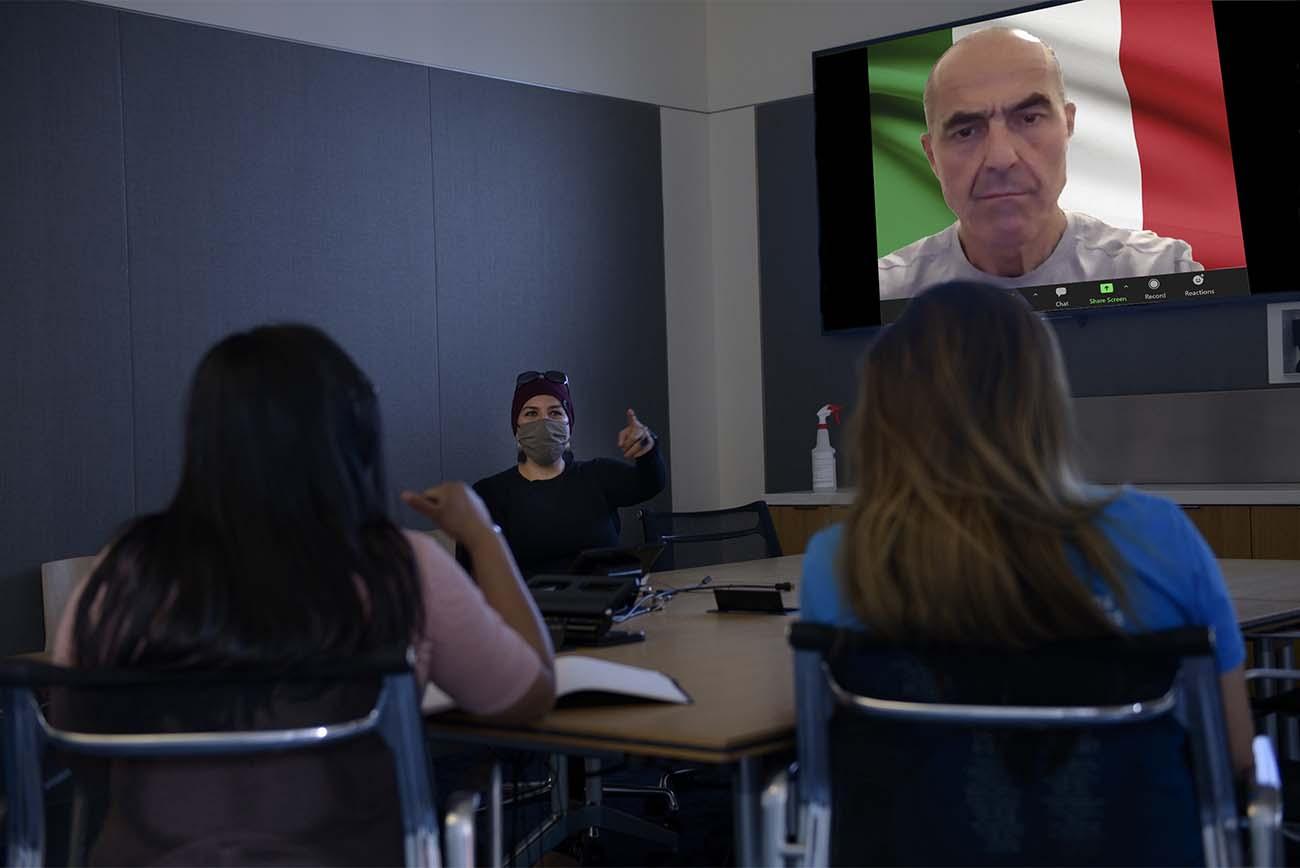 “Antibody drugs are growing in popularity to treat many diseases and are at the top of the charts in the pharmaceutical market,” Strong said. “Having an antibody to treat this disease was really appealing.”

But the students were investigating small molecules, not antibodies, as drug candidates. In a happy twist of fate, the COVID-19 pandemic and concurrent shift to video conferencing stripped away geographical barriers, and the class welcomed participation from experts across the globe, including one who provided the team with the missing piece to their puzzle.

“It turned out there was a professor in Italy studying the top target — complete serendipity,” Dr. Khanna recalled. She invited Michele Mazzanti, PhD, professor of cellular physiology at the University of Milan, to watch her students present their targets for their final project. “After the pitch ends, he writes to me, ‘By the way, I happen to have an antibody for this protein. Would you be interested to use it?’”

The team is currently testing proof of concept, seeing if the antibody will bind to CLIC-1 and disable its ability to funnel chloride in and out of microglia.

Strong has spent the past year writing grants, fundraising, running board meetings, developing promotional materials and pitches, coordinating with antibody producers and filing paperwork with the Arizona Corporation Commission. 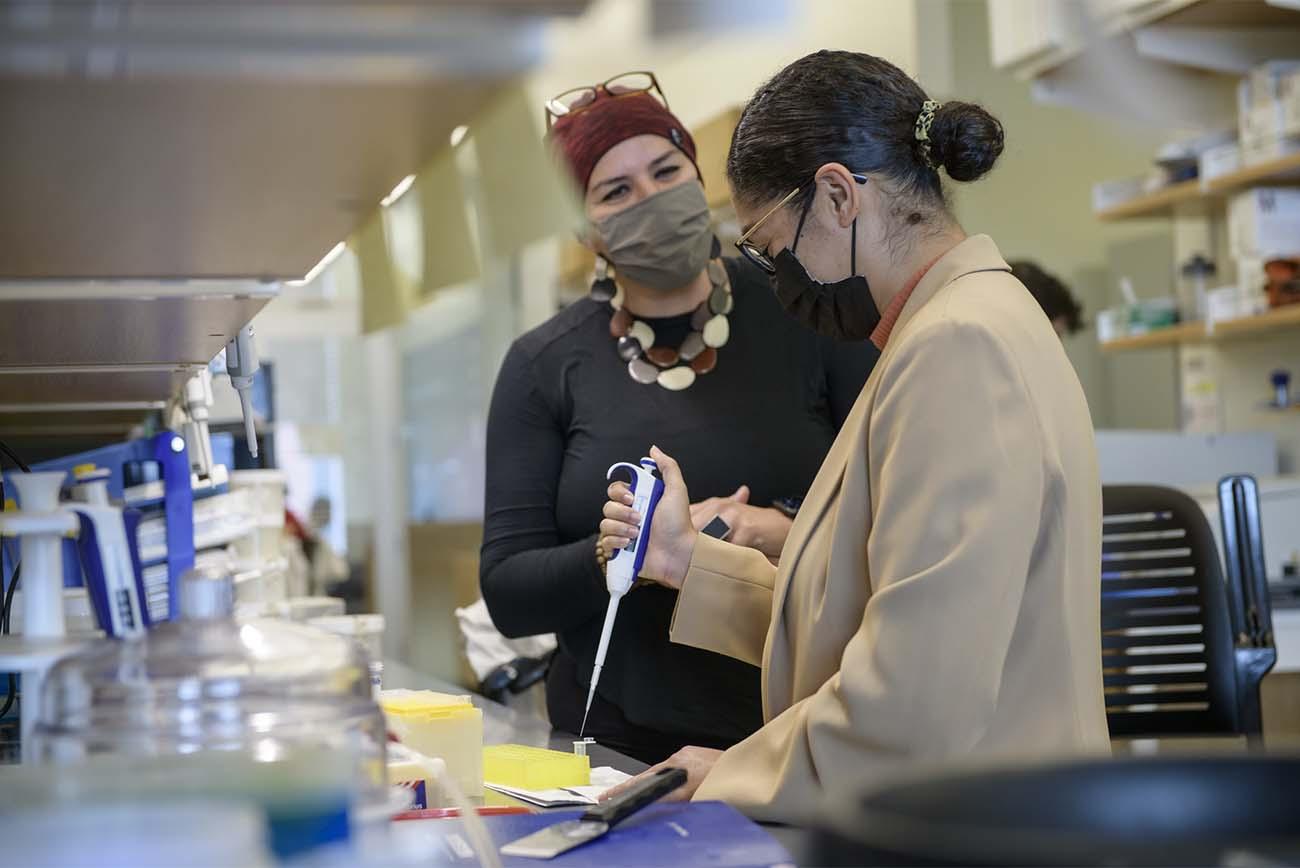 “Jaesa is very driven and excited about both the science and the business aspect of this company,” Dr. Khanna said. “It’s critical to have at least one member of the team who is willing to set everything aside to say, ‘I want this to succeed.’ And that was Jaesa.”

For Strong, learning about the high cost of pharmaceutical research earlier in her undergraduate career was daunting.

“Once I took up my major, I learned more about drug development and all that goes into it. I was like, ‘Wow, this is something I dreamed about from a young age, and I’ll never be able to afford this,’” she recalled. “But once I took Dr. Khanna’s course, I realized, ‘OK, you don’t have to be a billionaire.’”

For Dr. Khanna, opening her students’ eyes to the possibilities around them is critical to her mission as an educator.

“We don’t know yet if it’s going to be neuroprotective in Alzheimer’s, but if it works, Jaesa has that path opened up for her, and it’s going to be really exciting,” said Dr. Khanna, who is also a member of the BIO5 Institute. “Even if this doesn’t move forward, I have sparked the interest of building a company in her, and have enabled her to realize that it is possible. That alone is worth everything.”