A Virtual Bridge to Grad School Built During the Pandemic 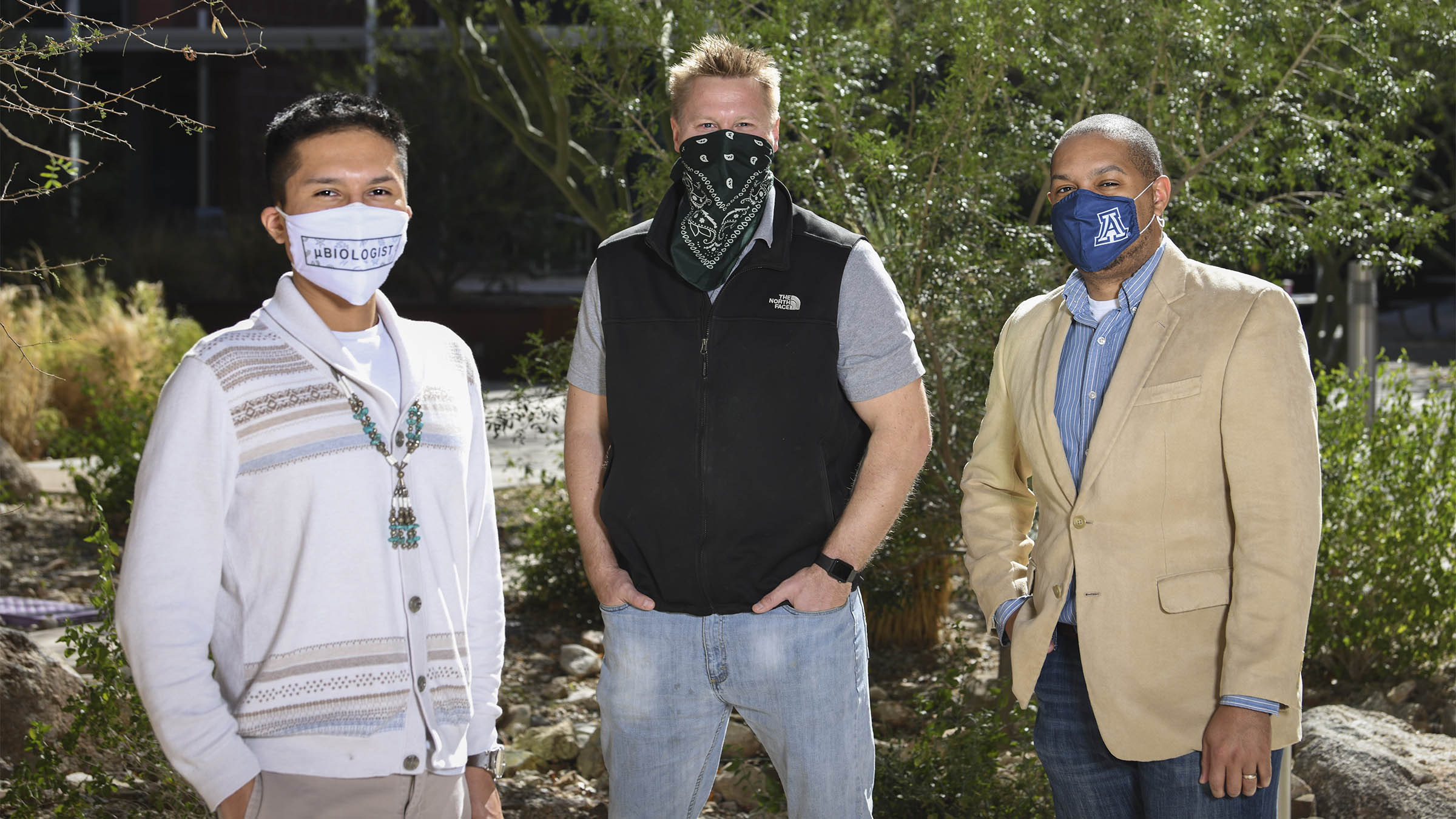 A Virtual Bridge to Grad School Built During the Pandemic

In June 2020, in the midst of the COVID-19 pandemic and widespread racial tension following the death of George Floyd while in police custody, Michael Johnson, PhD, assistant professor of immunobiology at the College of Medicine – Tucson, wondered what he could do to lift up underrepresented minorities during such a difficult moment in the nation’s history.

For Dr. Johnson, the answer lay in a summer research program he and a colleague built from the ground up, which they called NSURP, or the National Summer Undergraduate Research Project, a remote microbiology internship for underrepresented students and the largest program of its kind.

“This was my release; this was my solace,” Dr. Johnson said. “This was the thing that kept me motivated and moving.”

Along with David Baltrus, PhD, associate professor at the School of Plant Sciences in the College of Agriculture and Life Sciences, Dr. Johnson quickly created what he describes as a “virtual matchmaking program,” which pairs undergraduate students with microbiology labs across the country. 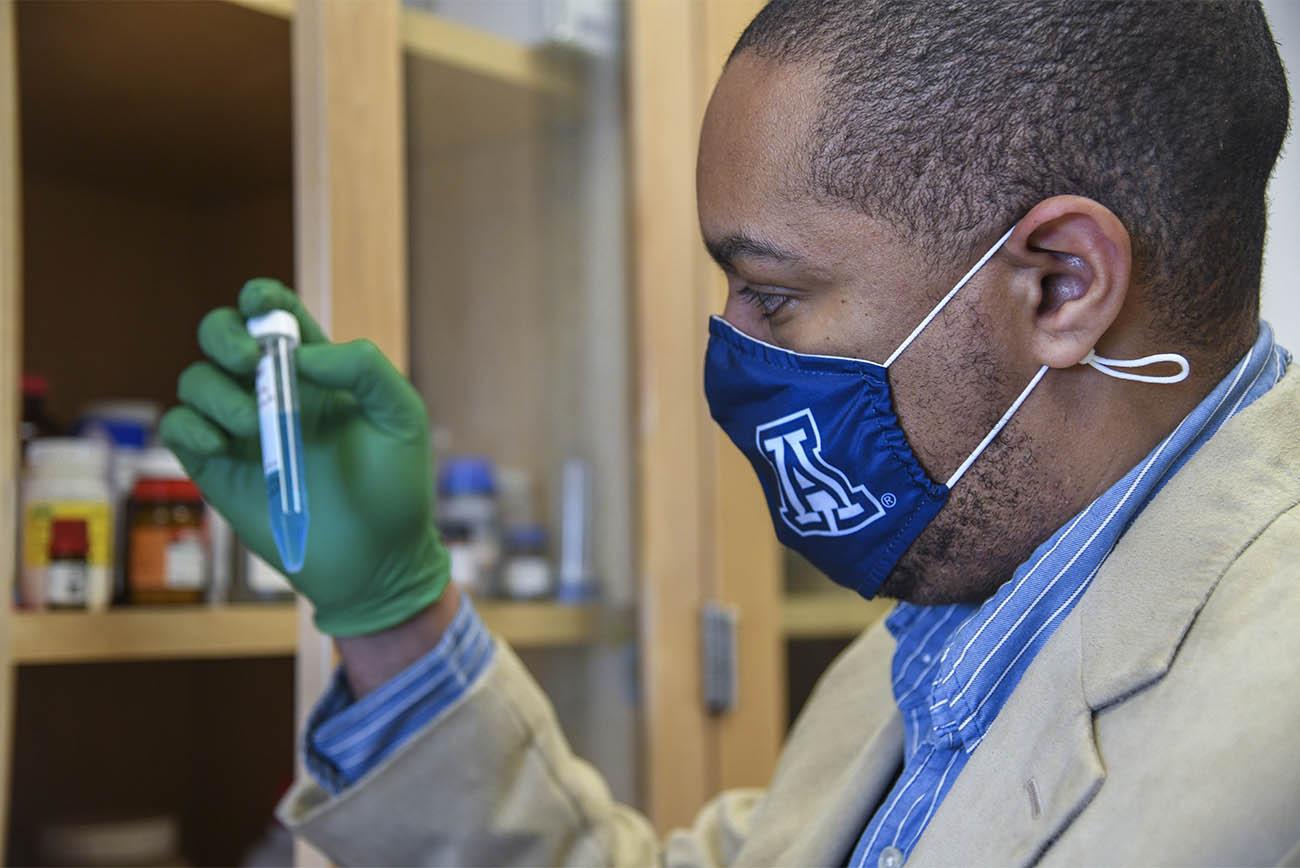 “We built the whole thing from scratch, all the framework for it, in the middle of the pandemic in three weeks,” Dr. Johnson said.

“We were flying by the seat of our pants,” Dr. Baltrus added.

In just a few short weeks, interest in NSURP snowballed, and the program eventually involved 250 students and 170 mentors across the country. It ran for eight weeks, from June to August 2020.

“I had no idea it was going to grow to be this big,” Dr. Johnson said. “I had no idea how many underrepresented minorities would be impacted and how they would use this to apply for graduate programs.”

The hands-on experience an undergraduate student gains in a research lab opens doors to graduate programs — but not all students have easy access to these internships.

“One of the indicators of successfully keeping people in science is to provide interaction with researchers, to dive in and learn how to do science,” Dr. Baltrus said. “When you look at the statistics, there are a variety of groups that are underrepresented in scientific research.” 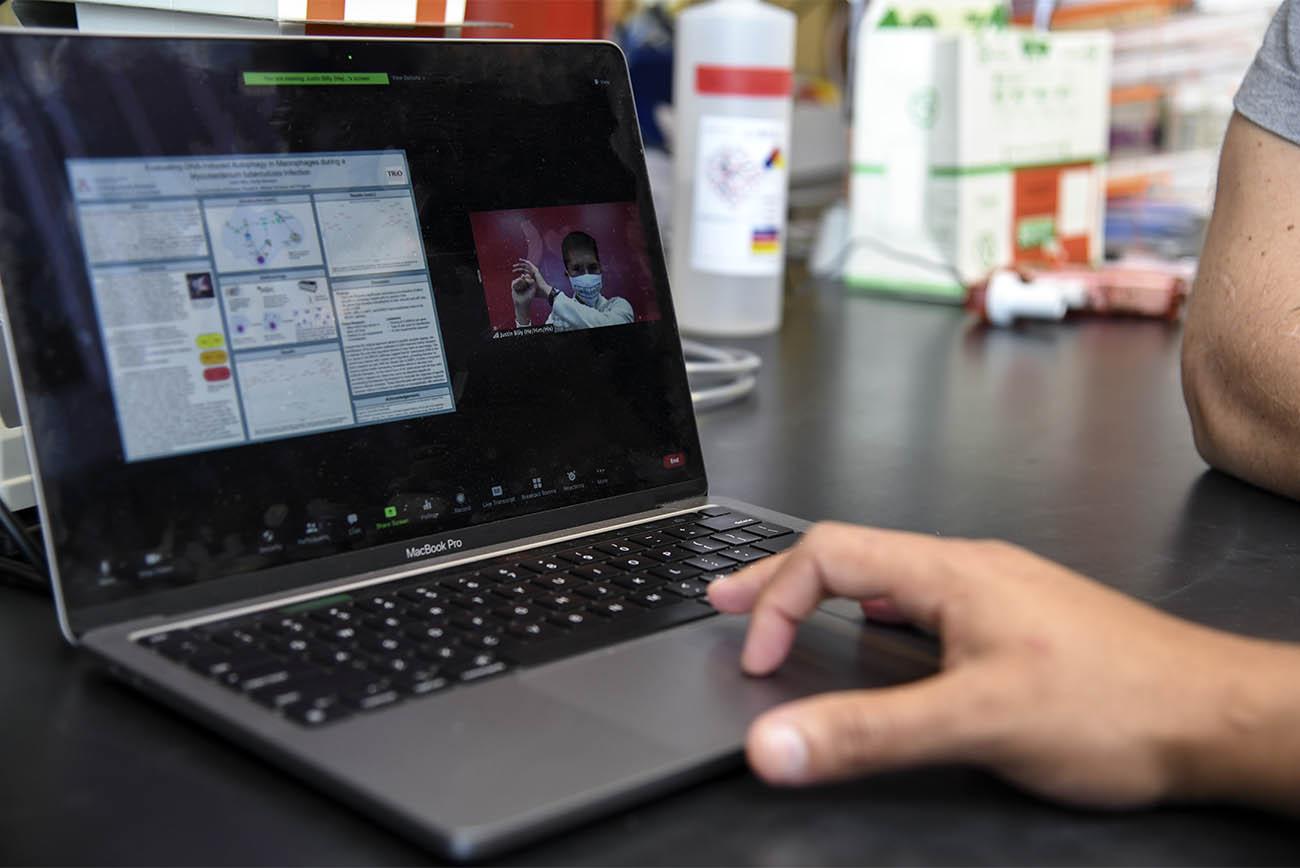 For some students, the pandemic threw a wrench in summer internship plans. But the student surveys conducted by Drs. Johnson and Baltrus painted an even more nuanced picture. Even in non-pandemic years, summer internships are out of reach for up to two-thirds of the surveyed students, who may be unable to take time off to travel.

“It could be for a variety of reasons,” Dr. Johnson said. “It could be they were caring for a loved one. They didn’t have the financial resources to travel. They had to work for their family company. Some of them have children; maybe picking up and traveling would have been too strenuous.”

Drs. Johnson and Baltrus realized that remote internships could continue to provide stepping stones into graduate programs well into the post-COVID-19 era — and though NSURP was born in the pandemic, they both say it’s here to stay.

“We live in a virtual world now, and there is a unique opportunity to place people in different situations and help make connections,” Dr. Baltrus said.

Voices from the inaugural class

College of Agriculture and Life Sciences fourth-year microbiology undergraduate Justin Billy is a member of the Navajo Nation from the Four Corners region. First-generation college student Raymundo Buelna, a second-year physiology and medical sciences undergraduate in the College of Medicine – Tucson, moved to Arizona from Mexico when he was in high school, speaking no English at the time. Both took part in the inaugural class of 2020 and would recommend the program to other undergraduates looking for a remote internship. 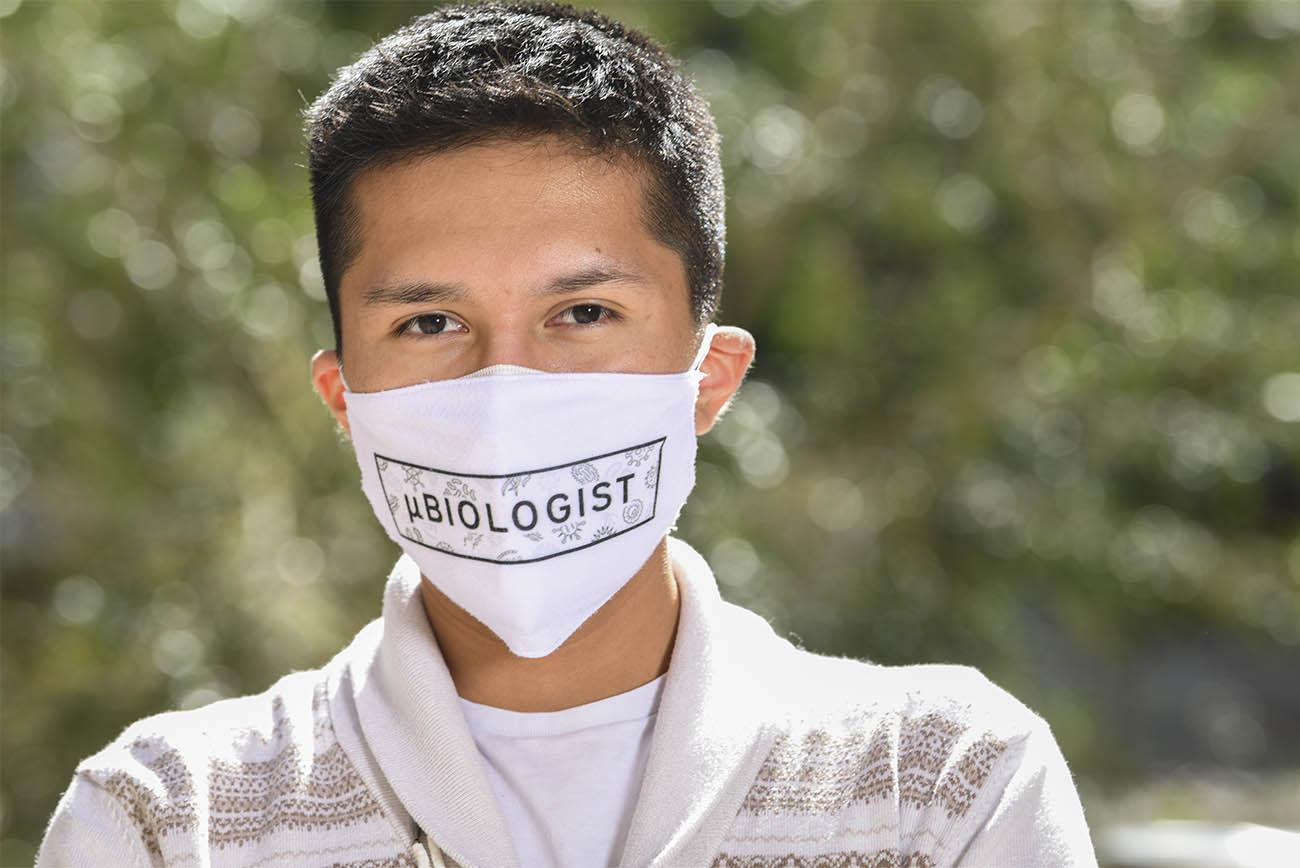 Earlier in 2020, Billy had a summer research internship lined up at a University of Arizona lab, but it was canceled in response to the pandemic. Fortunately, he had just started following Dr. Baltrus on Twitter when he saw a tweet announcing NSURP in June.

Billy was matched with Huntly Morrison, a doctoral student at the University of California at Berkeley studying Mycobacterium tuberculosis. He received raw data and learned how to code a script to clean up and visualize that data.

“I got to meet with all the lab members, gaining that critical networking you need in academia,” Billy said of his regular virtual lab meetings. In fact, the head of the lab he worked with wrote the letter of recommendation that helped Billy get accepted into a graduate program at the University of Wisconsin in Madison.

“Starting NSURP and seeing it grow was probably the highlight of my career so far.”Michael Johnson, PhD, assistant professor of immunobiology, College of Medicine – Tucson

“I don’t think I would have gotten into grad school without NSURP,” he said. “That was my ticket to grad school.”

Buelna hopes his internship will help open doors to a career as a physician, a profession he is drawn to because he loves working with people. For that reason, he was nervous about participating in a remote internship without face-to-face interaction. But he says his mentor, Kayla Dinshaw, another doctoral student investigating M. tuberculosis at UC Berkeley, made him feel welcome.

“Kayla was very approachable, and each research member was very friendly,” Buelna said. “I didn’t feel like an outsider at all.”

With the support of Dinshaw, Buelna honed his science communication skills by putting together a reader-friendly “explainer” about tuberculosis for the general public.

In an article for Nature Microbiology published in October, Drs. Johnson and Baltrus, both of whom also are members of the BIO5 Institute, along with coauthor Jennifer Gardy of the Bill and Melinda Gates Foundation and the British Columbia Centre for Disease Control, wrote that research experiences for underrepresented minorities are a “crucial launching point” to careers in science, and that obstacles to this research can compromise a student’s ability to enter graduate programs.

“It’s important to give people that leg up to think about careers in science,” Dr. Baltrus said. “Anything we can do to level the playing field is important.”

For Dr. Johnson, the opportunity to act as a mentor to future scientists is one of the most rewarding aspects of his career.

“I really like being able to see the eureka moments, inspire students, and get them interested in science,” said Dr. Johnson. “Starting NSURP and seeing it grow, and seeing how many people were positively affected, was probably the highlight of my career so far.”

The National Summer Undergraduate Research Project’s 2021 session will run from June 14 to August 6, and applications open today, April 12. Starting this summer, with funding from the University of Arizona and the National Science Foundation, NSURP will be a paid internship, with opportunities in microbiology and computational immunology.

Researchers interested in acting as mentors for the 2021 NSURP program can apply using the online application form.

Black, Indigenous or Hispanic students interested in participating in the 2021 NSURP program can apply using the online form. To learn more, visit the NSURP website.