Ronald S. Weinstein, MD, director of the University of Arizona College of Medicine – Tucson’s national award-winning Arizona Telemedicine Program and a professor of pathology, has been recognized with a Health Care Heroes lifetime achievement award by the Phoenix Business Journal. 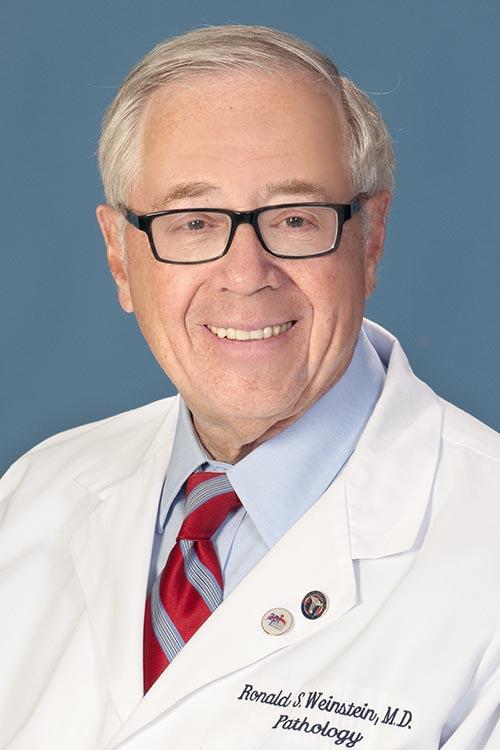 “The Phoenix Business Journal’s Health Care Heroes Lifetime Achievement Award means a lot to us. This draws attention to the incredible support we have received from the Arizona state Legislature for many years up in Phoenix,” Dr. Weinstein said. “The University of Arizona’s Office of Legal Affairs in Tucson deserves its share of the credit for this success story. Their guiding hand enabled the Arizona Telemedicine Program to succeed where many other universities have failed to support telemedicine. Technology transfer is one of our strengths.”

An international pioneer in the field of telemedicine, Dr. Weinstein obtained his medical degree from Tufts University School of Medicine and did his residency in pathology at Massachusetts General Hospital, where multi-specialty telemedicine was invented in 1968. Dr. Weinstein was the first Mass General resident, in the spring of 1968, to work on patient cases through the new program, consulting with nurse managers at the Logan International Airport to interpret patients’ laboratory results. He was among the first to use clinical television microscopy, a method that allowed pathologists to review images remotely.

Early this year, the Arizona Telemedicine Program went into overdrive, offering training and assistance to medical professionals in how to develop and expand telehealth opportunities during the COVID-19 pandemic. Dr. Weinstein told the Phoenix Business Journal the number of telehealth cases has grown 25% annually since 1995, when there were 350,000 telehealth visits in the entire United States, mainly for prisoners. Last year, there were 37 million telemedicine cases, he said, adding that, according to insurance claims data, that figure will rise to 1 billion cases this year due to the COVID-19 pandemic.

“Telemedicine is picking up steam across the country now that a large majority of practices are doing it, and usage is exploding nationally because of COVID-19,” Dr. Weinstein said. “It’s staggering how quickly that’s happened.”

Dr. Weinstein joined the UArizona Health Sciences faculty in 1990 as chair of the Department of Pathology. He has been president of five professional societies, including the American Telemedicine Association. Dr. Weinstein was the University of Arizona’s 2012 Technology Innovator of the Year.