Researchers hope that finding a connection between carotid disease and Alzheimer’s could provide a new pathway for preventing dementia.
November 3, 2021

A $4.9 million grant from the National Institutes of Health (NIH) will fund a University of Arizona College of Medicine – Tucson-led study to determine the impact of carotid disease on cognitive impairment and Alzheimer’s disease, the most common type of dementia.

Carotid artery disease happens when fatty deposits clog blood vessels that deliver blood to the brain, and it causes about 10-20% of strokes. Finding a connection between carotid disease and Alzheimer’s could provide a new pathway for preventing dementia, as carotid disease is a modifiable risk factor that can be slowed or reduced through lifestyle changes, medication and surgical intervention. 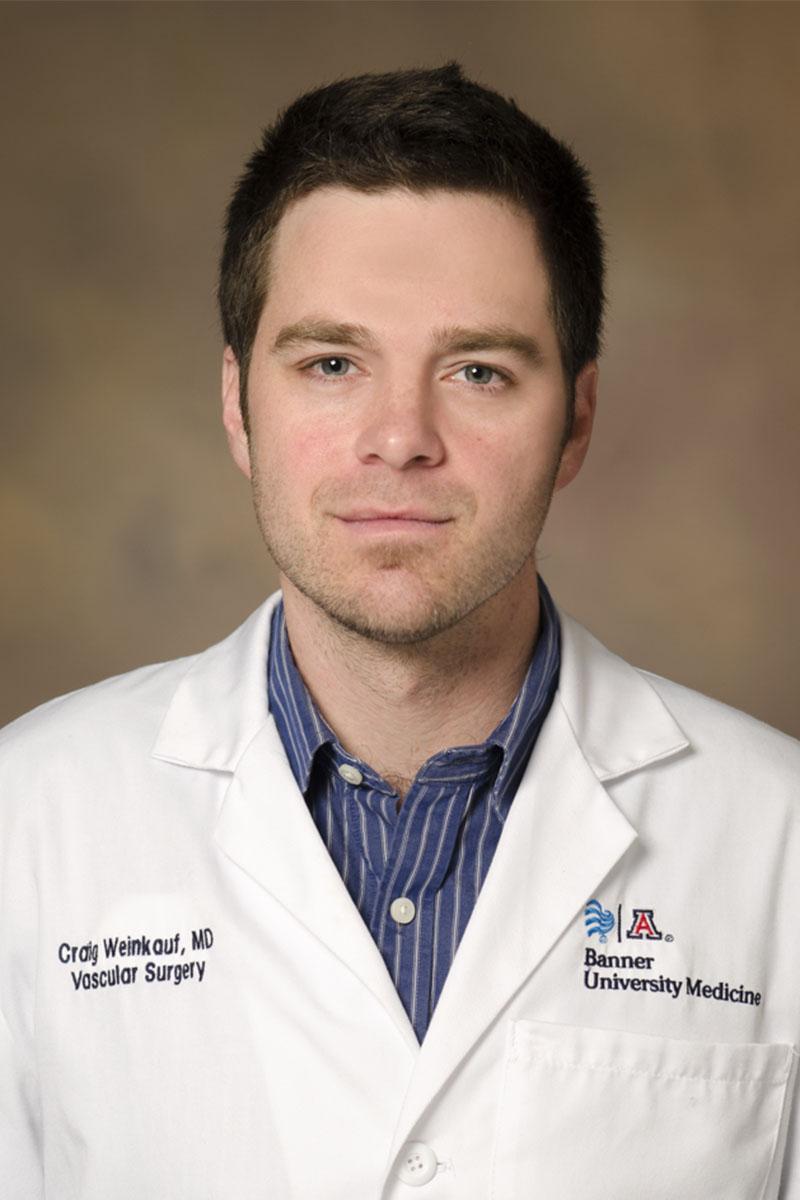 “All of those treatments could have meaningful outcomes for patients in terms of reducing their risks of stroke and improving cognitive function,” said Craig Weinkauf, MD, PhD, who is leading the study and is an assistant professor in the Department of Surgery’s Division of Vascular and Endovascular Surgery.

Body parts such as arms or legs may hurt when they don’t receive enough blood, but the brain has no way to communicate with itself that it’s not getting what it needs. The brain uses approximately 25% of the body’s blood and oxygen supply, yet little is known about how blockages that may reduce blood flow to the brain impact its function.

“It seems logical that severe blockages would affect things like thinking, clarity and memory. As a field, we don’t treat patients with carotid disease based on cognitively defined outcomes; we don't even look for them,” said Dr. Weinkauf, who also is a Sarver Heart Center member. “The whole treatment paradigm is based off of stroke prevention, so all of my work has been looking beyond stroke, at how do blockages in the arteries that lead to your brain affect your brain health?”

In the study, Dr. Weinkauf and his collaborators will use advanced imaging and neurocognitive testing to try to identify three different factors. First, they are looking for which early Alzheimer’s-specific pathological changes are associated with carotid disease. Second, they want to understand how carotid disease leads to those changes, and third, they hope to identify which carotid disease treatments are effective at improving or preventing those outcomes.

“All together, through this highly collaborative work, these insights will help explain vascular contributions to Alzheimer’s risk,” Dr. Weinkauf said. “We hope the eventual findings will help two large patient populations: those with carotid disease and those at risk for Alzheimer’s, which we think overlap more than is currently appreciated.”

For years, that team has worked alongside the Tucson Vascular Surgery Consortium – a group of vascular surgeons from some of Tucson’s largest health care providers – to gather preliminary data. Those data indicate carotid disease increases the risk for key pathological brain changes associated with Alzheimer’s and other types of dementia. It also found that surgically removing plaque in arteries is associated with decreased white matter lesions and neurofibrillary tangles, the presence of which indicate a higher risk of developing dementia. Such surgical procedures also increased structural connectivity and cognition.

“This award will provide the funding needed to explore the role carotid artery disease likely plays in the development of cognitive decline associated with Alzheimer’s disease. These studies, led by Dr. Weinkauf, have the potential to improve the lives of many in our aging population,” said Michael Abecassis, MD, dean of the UArizona College of Medicine – Tucson.

In 2020, approximately 5.8 million people in the U.S. were living with Alzheimer’s, which is the fifth-leading cause of death among adults aged 65 and older. According to the Alzheimer’s Association, Arizona has one of the nation’s highest rates of Alzheimer’s disease.