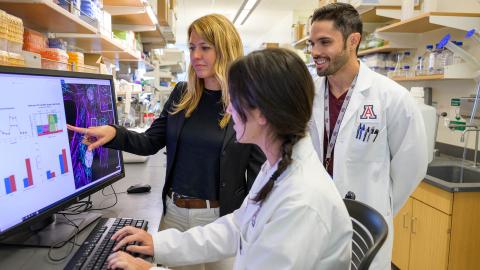 Researchers at the Center for Innovation in Brain Science are flipping the traditional research model by first considering known factors underlying diseases and then seeking treatments using technologies to scan data for patterns that suggest certain compounds may impact those biological pathways.

Doctors diagnose 10 million new cases of dementia yearly, and that number is projected to triple by 2050. Dementia is most often caused by Alzheimer's disease, and research has made little progress tackling it over more than a century. Now, using cutting-edge bioinformatics and computational biology, University of Arizona Health Sciences researchers have identified promising new candidates for Alzheimer's treatment as well as new strategies for optimizing prevention. 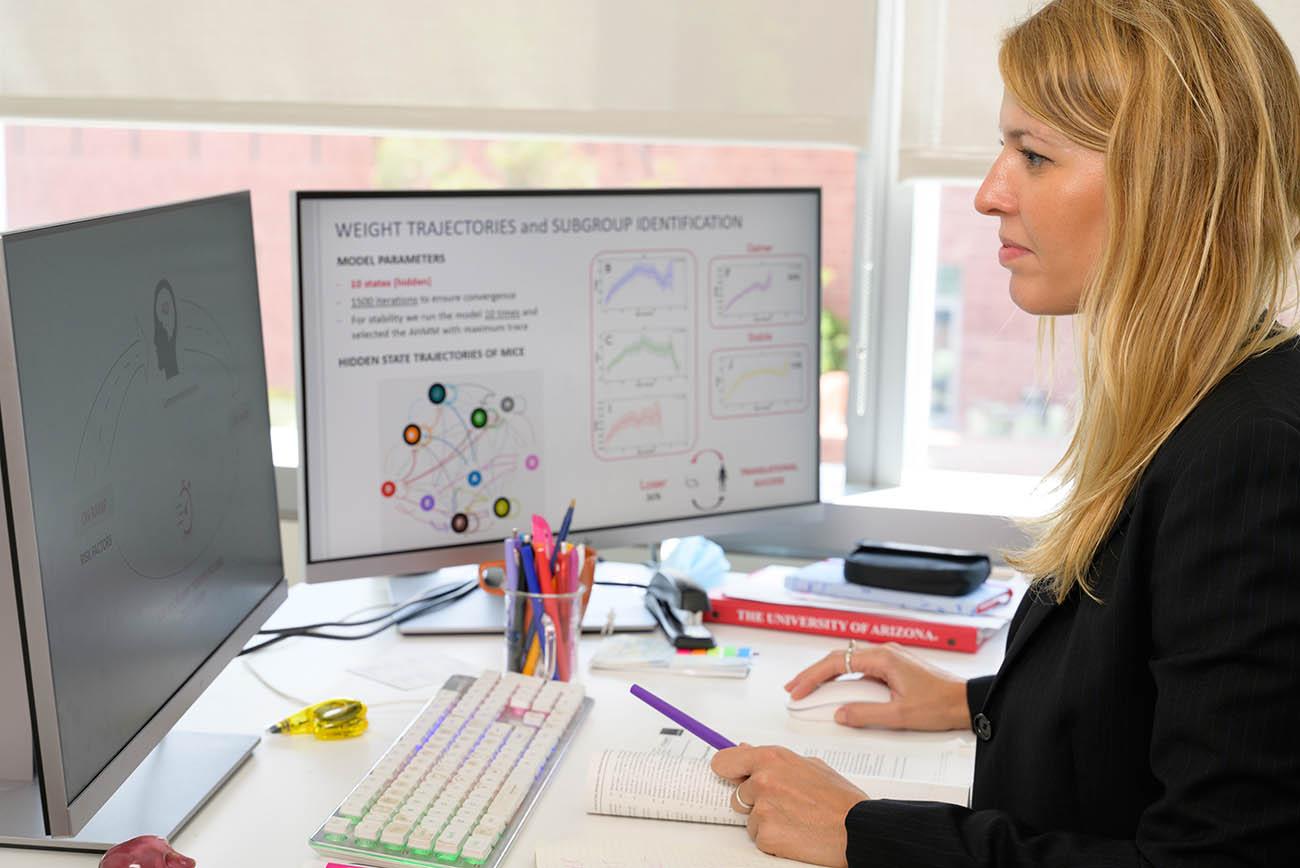 Despite studying Alzheimer's disease since its documentation in 1906, scientists have yet only a limited understanding of it, and there are no proven preventions or treatments for it today.

In just five years, Rui Chang, PhD, and Francesca Vitali, PhD, researchers at the UArizona Health Sciences Center for Innovation in Brain Science, have made incredible strides identifying molecular compounds that show significant potential for helping to prevent Alzheimer's disease and even reverse its effects.

A fast track to Alzheimer's prevention

Dr. Vitali, associate director of bioinformatics at the Center for Innovation in Brain Science, focused on the preclinical phase of Alzheimer's disease: the window in which disease is progressing undiagnosed, which can span 20 years. In a novel strategy she’s named Targeted Risk Alzheimer's disease Prevention (TRAP), Dr. Vitali drew on scientific papers and drug information repositories to identify FDA-approved pharmaceuticals with promise for preventing Alzheimer's disease. 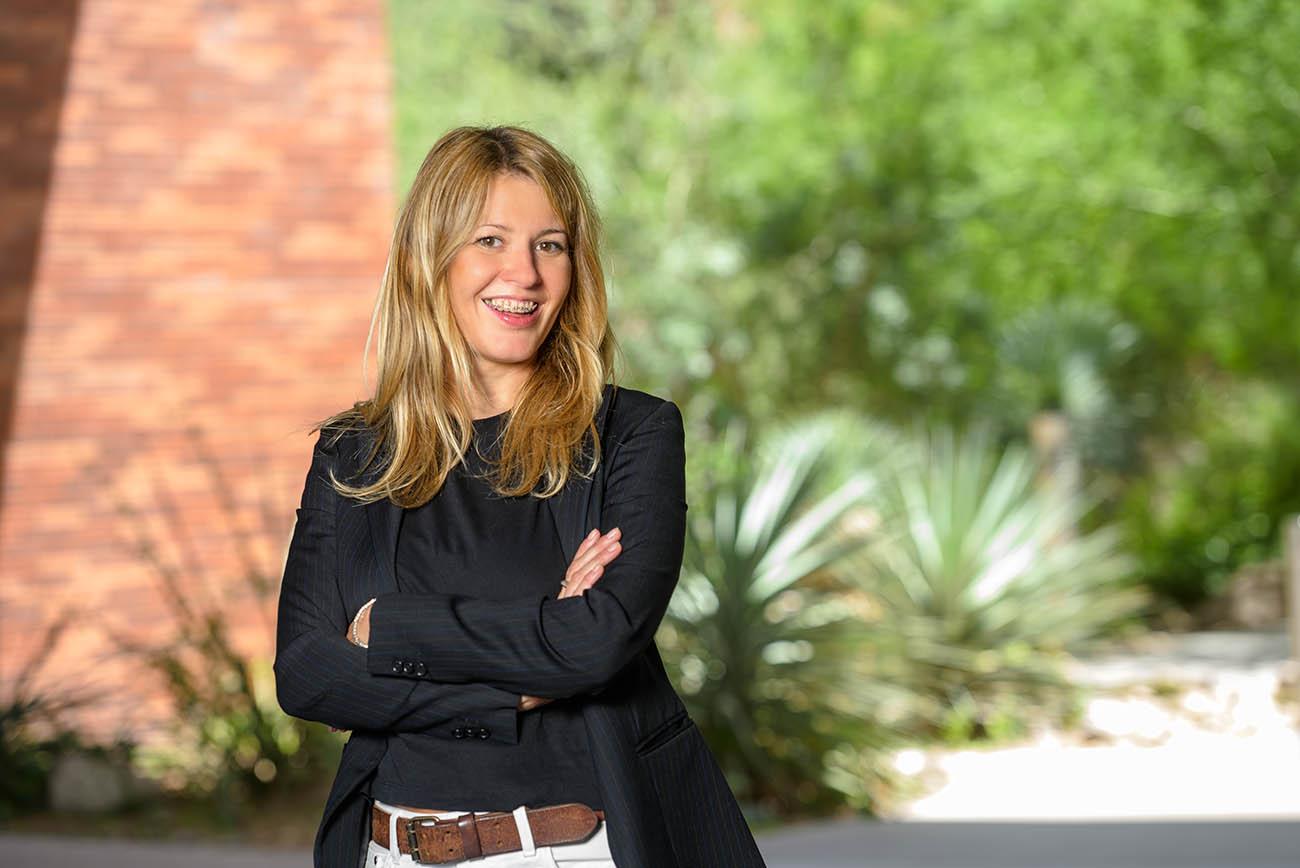 First, Dr. Vitali used natural language processing to mine information from more than 10,000 published medical studies and reports. In simple terms, natural language processing enables computers to "read" vast amounts of text, finding patterns and information that is otherwise obscured by the sheer scale of content. Through that process, she identified more than 300 diseases and conditions linked to higher risk for Alzheimer's disease.

Dr. Vitali then employed data mining across drug information repositories to identify more than 600 approved medicines used to treat those conditions. Through further evaluation, she ultimately focused on 46 drugs for a system biology analysis that revealed the complex ways they work in the body – unique effects as well as interconnected biological mechanisms.

"Based on these findings, we believe that early interventions that strategically target known risks for developing Alzheimer's could effectively make this a preventable disease by 2025," said Dr. Vitali, who is an assistant research professor in the College of Medicine – Tucson’s Department of Neurology and a member of the BIO5 Institute.

Her analysis also showed which therapeutics, alone or in combination, might work best for patients with specific genetic profiles: a platform for a precision medicine approach to preventing Alzheimer's disease. And while Dr. Vitali developed the TRAP strategy for Alzheimer's, it can also be applied to other diseases lacking prevention and cures, such as Parkinson’s disease, multiple sclerosis and Lou Gehrig’s disease, also known as amyotrophic lateral sclerosis or ALS.

Undoing the damage of Alzheimer's disease

In a similar strategy, Dr. Chang, a computational biology investigator at the Center for Innovation in Brain Science, used artificial intelligence (AI) to analyze multiomic data sets: information on DNA, proteins, the microbiome and more. The data was drawn from thousands of postmortem brain tissue samples provided by the Accelerating Medicines Partnership Program for Alzheimer's Disease, a consortium recently established by the National Institutes of Health. 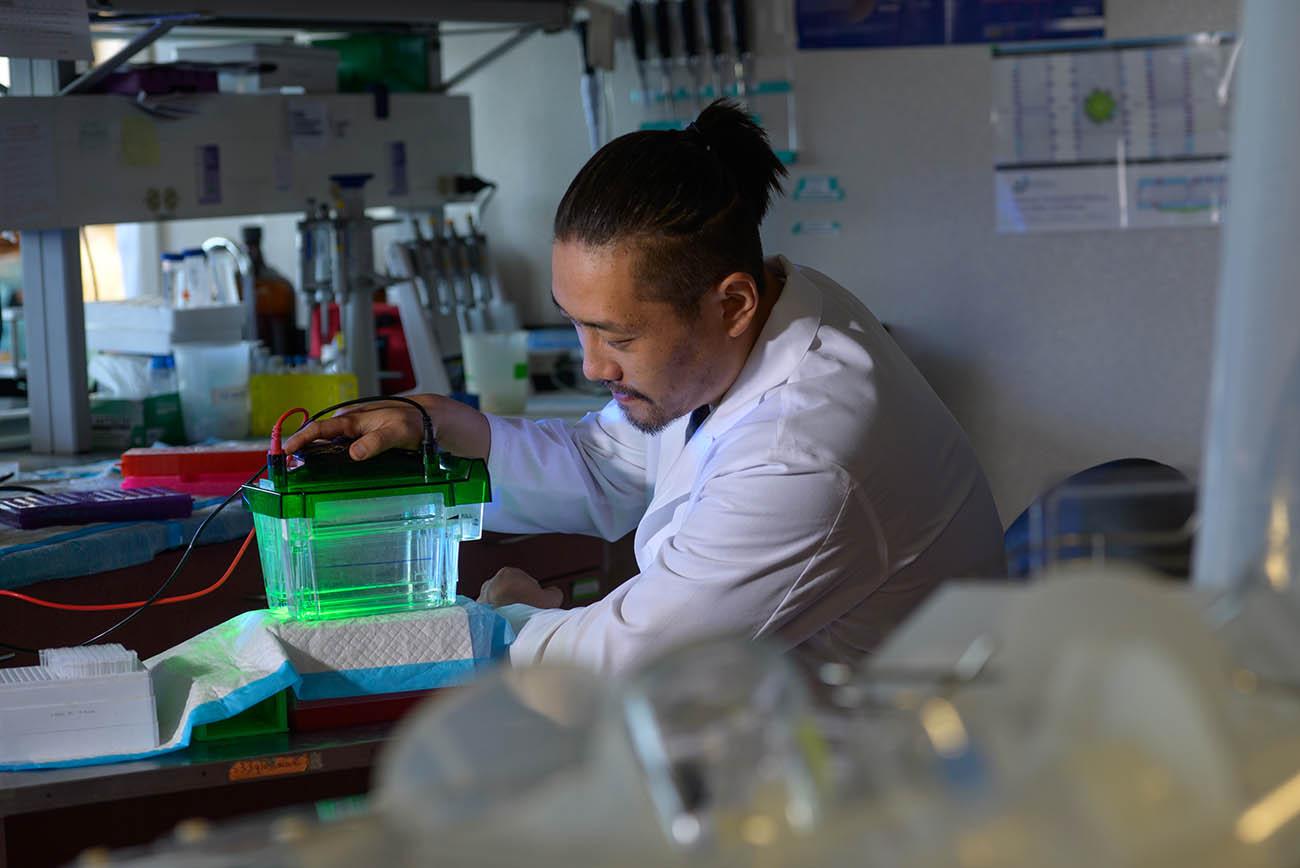 The key innovation in Dr. Chang's research, however, is the network model he created for the extensive ways that genes and proteins influence one another. Dysregulation of a single gene, for example, has ripple effects throughout the body, changing disease pathways. Scientists studying brain tissues see only terminal, downstream gene expressions, with no insight into how those states came about. Because the samples are from people who had lived with Alzheimer's disease for varying lengths of time, collectively they represent rich timelines of disease progression.

"My network model is able to pinpoint the upstream causes of disease pathology," explained Dr. Chang, who is an associate professor of neurology in the College of Medicine – Tucson. "I’m able to show exactly which gene in the upstream became dysregulated, the network changes it caused and therefore what could be a remedy — what gene or genes to perturb to return the whole network to the healthy state."

The analyses identified 6,000 potential targets and more than 3,000 potential compounds for treatment. Those were narrowed to 170 compounds that protect neurons from death or activate the brain's innate defense system to consume amyloid plaques and neurofibril tangles, which have been the focus of Alzheimer's disease research for the past two decades.

Ultimately, Dr. Chang's study converged on three treatments that significantly improved the working memory of mice with Alzheimer's impairments. Two of the compounds are substances naturally produced in all mammals and one is derived from plants. All reduce the brain plaques and protein tangles that have been the focus of Alzheimer's disease research for the past two decades.

But while other compounds might also reduce plaques and tangles (the landmark study in this line of inquiry was recently called into question), they have never been shown to improve cognitive deficits. In contrast, Dr. Chang's treated mice improved so dramatically their brain function nearly "caught up" with the control group of mice with no disease.

Natural language processing, AI and network analyses can accelerate discovery by overcoming the natural biases and blind spots intrinsic to human analysis, revealing connections that are often only logical in hindsight.

All three compounds are now on track for clinical trials, and because neurodegenerative diseases seem to have overlapping mechanistics, Dr. Chang believes they could also lead to treatments for other diseases, including Parkinson's and Lewy body dementia. He also believes his methodology could lead to cures for comparably complex challenges like cancer, now recognized as 100-plus similar diseases.

Typically, therapeutics begin with discoveries in labs. Pharmaceutical scientists learn that a compound has a biological effect, then try to match that effect to the known causes and symptoms of health conditions.

Researchers like Drs. Chang and Vitali are flipping that model, seeking treatments and cures by first considering known factors underlying diseases. They then use technologies to scan profusions of data for patterns that suggest certain compounds may impact those biological underpinnings.

The approach offers advantages evidenced in their successes: the sheer size of the data sets would take decades to process without these technologies and working with so much data has the added advantage of establishing greater confidence in findings. The flipped model also accelerates discovery: Dr. Chang's findings were derived in just five years, Dr. Vitali's in two. 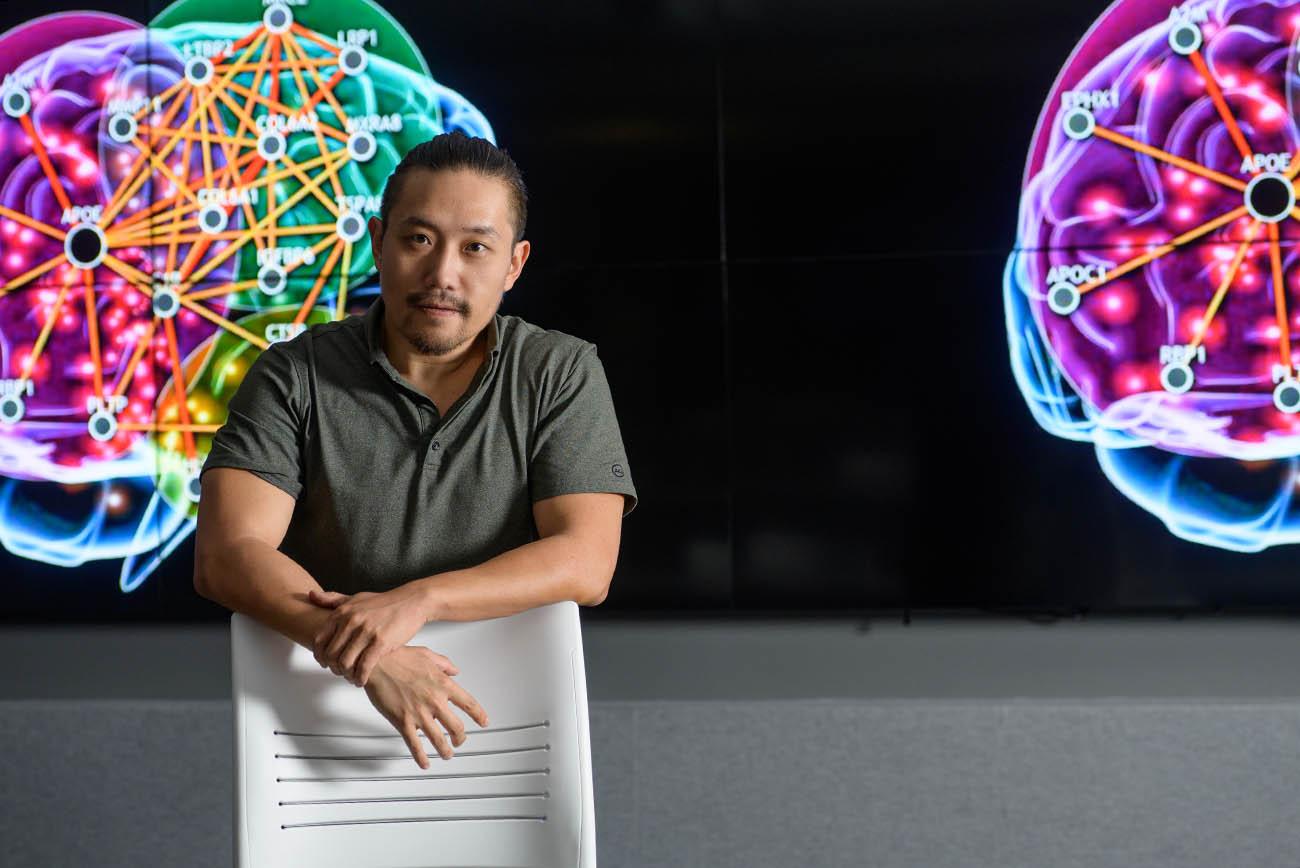 Perhaps most importantly, natural language processing, AI and network analyses can accelerate discovery by overcoming the natural biases and blind spots intrinsic to human analysis, revealing connections that are often only logical in hindsight. The 6,000 initial targets surfaced by Dr. Chang, for example, certainly included many that hadn't been considered relevant to Alzheimer's disease.

"Today, there are two camps in medical research," Dr. Chang said. "One is traditional biology, the other is AI and data science, but it's critical that these two camps are collaborating, not competing."

Data scientists can come up with hypotheses, but biologists are essential in validating those hypotheses, Dr. Chang said. And even the most advanced computers are no substitute for insight, intuition and imagination. Biologists bring and inspire new ideas, and no level of computing power today can replace that.

"It all boils down to the fact that AI is data-driven, and biologists are knowledge-driven," Dr. Chang said. "Our research works best when we bring those two approaches together. We need each other, and I hope to see even more collaboration going forward."