Married Couple are ‘Heart and Soul’ of Willed Body Program

Funeral directors Kat and Jared Alvarado set the tone for faculty, students and others to respectfully recognize the sacrifice made by donors.
July 7, 2022 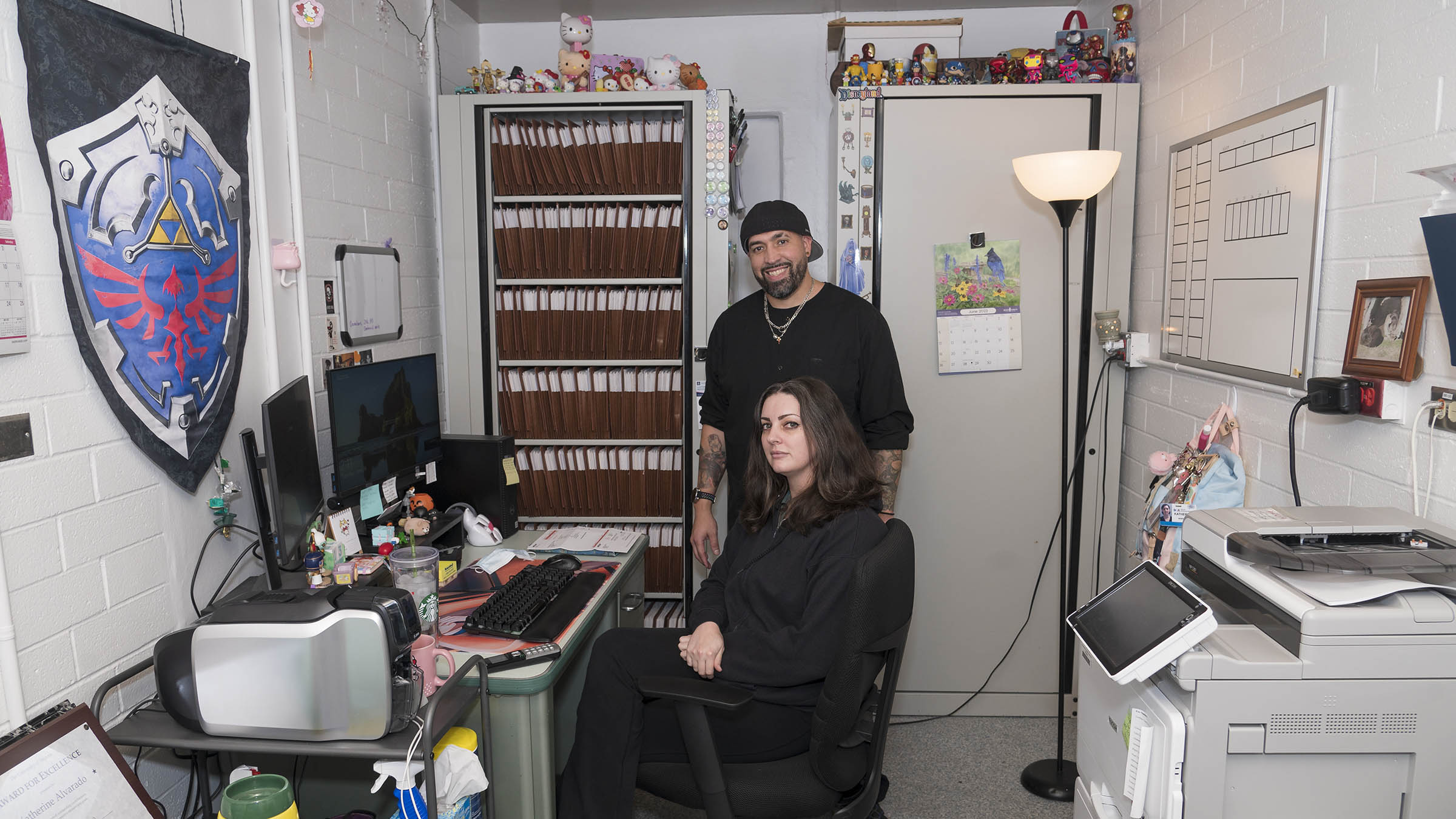 Jared and Kat Alvarado are funeral directors for the UArizona College of Medicine – Tucson’s Willed Body Program, which accepts whole body donations committed by Arizonans before they die to be used as educational tools after their deaths.

Married Couple are ‘Heart and Soul’ of Willed Body Program

Medical students around the country start their journey to become physicians by studying the human body in gross anatomy labs, where they are reminded that real people volunteered their bodies to serve as educational tools to train them to help others. 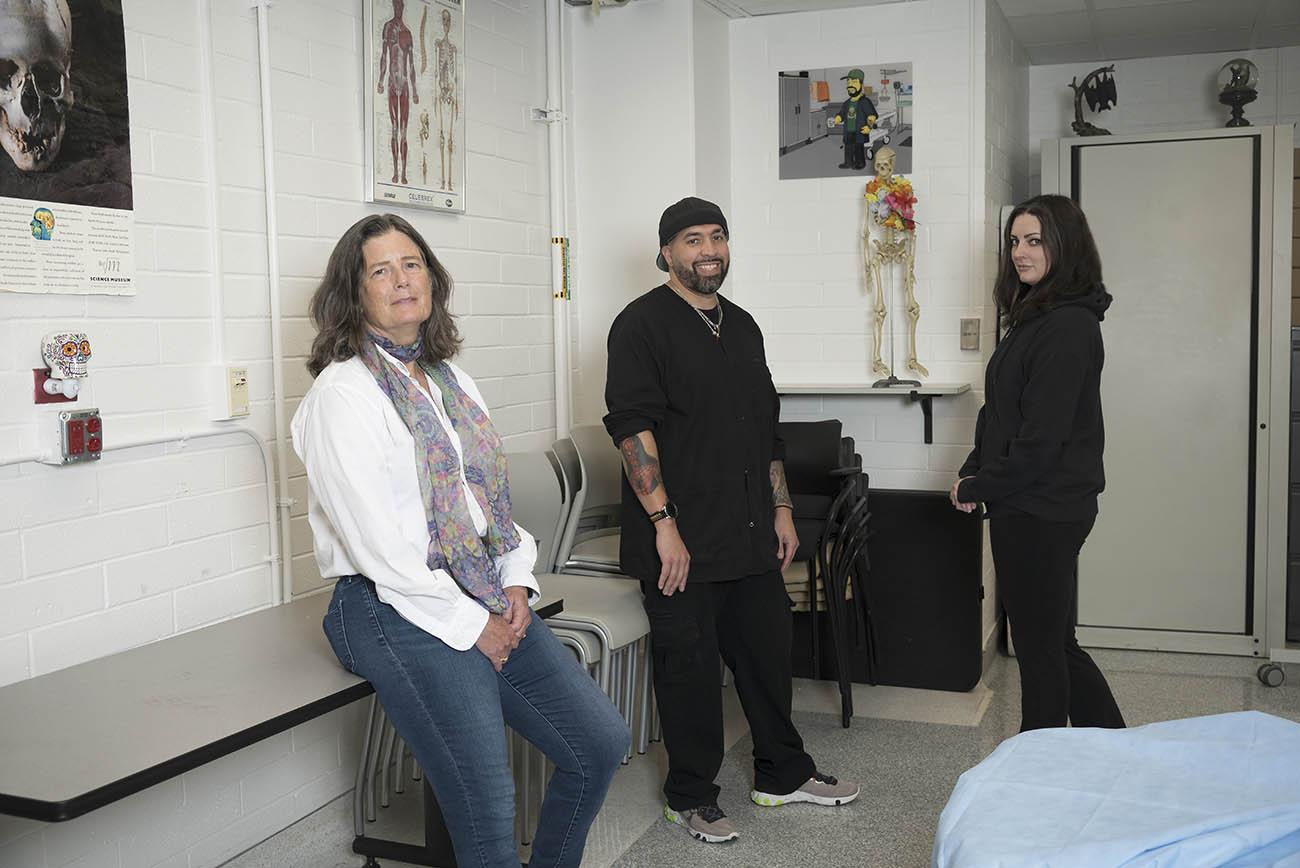 It’s no different at the University of Arizona Colleges of Medicine – Tucson and Phoenix. The Tucson-based Willed Body Program annually accepts 150-200 whole body donations, which are embalmed and put in cold storage for use by both colleges for up to two years. Afterward, the remains are cremated and ashes returned to the families or spread in nearby mountains.

“The people of Arizona are incredibly generous in this respect, because I know some willed body programs do have issues with not enough donors. And we never do,” said Jean Wilson, PhD, program director, anatomy instructor, professor of cellular and molecular medicine, and BIO5 Institute member. “We always have enough every year to supply the needs of the college and beyond.”

The Willed Body Program serves more than just the Colleges of Medicine – Tucson and Phoenix. It also supplies bodies for the A.T. Still University School of Osteopathic Medicine in Phoenix and nursing programs at the UArizona College of Nursing, Arizona State University and Northern Arizona University.

Currently, about 9,000 Arizonans have been issued willed body donor cards through the program that was founded in 1967.

Dr. Wilson credits the program’s success in large part to the respectful, professional tone set by its funeral directors, Jared and Kat Alvarado. The husband-and-wife team work with donors, the families, faculty, physicians, nurses, students and others who benefit from the program.

“They’re unbelievable,” Dr. Wilson said of the Alvarados. “In the 32 years I’ve been affiliated with the program, we’ve had people who are fine. But between the two of them, Kat and Jared are exceptional. They’re so good with the donor families and the donors. They know exactly the right things to say. They’re very gentle and empathetic. We are super lucky to have them.” 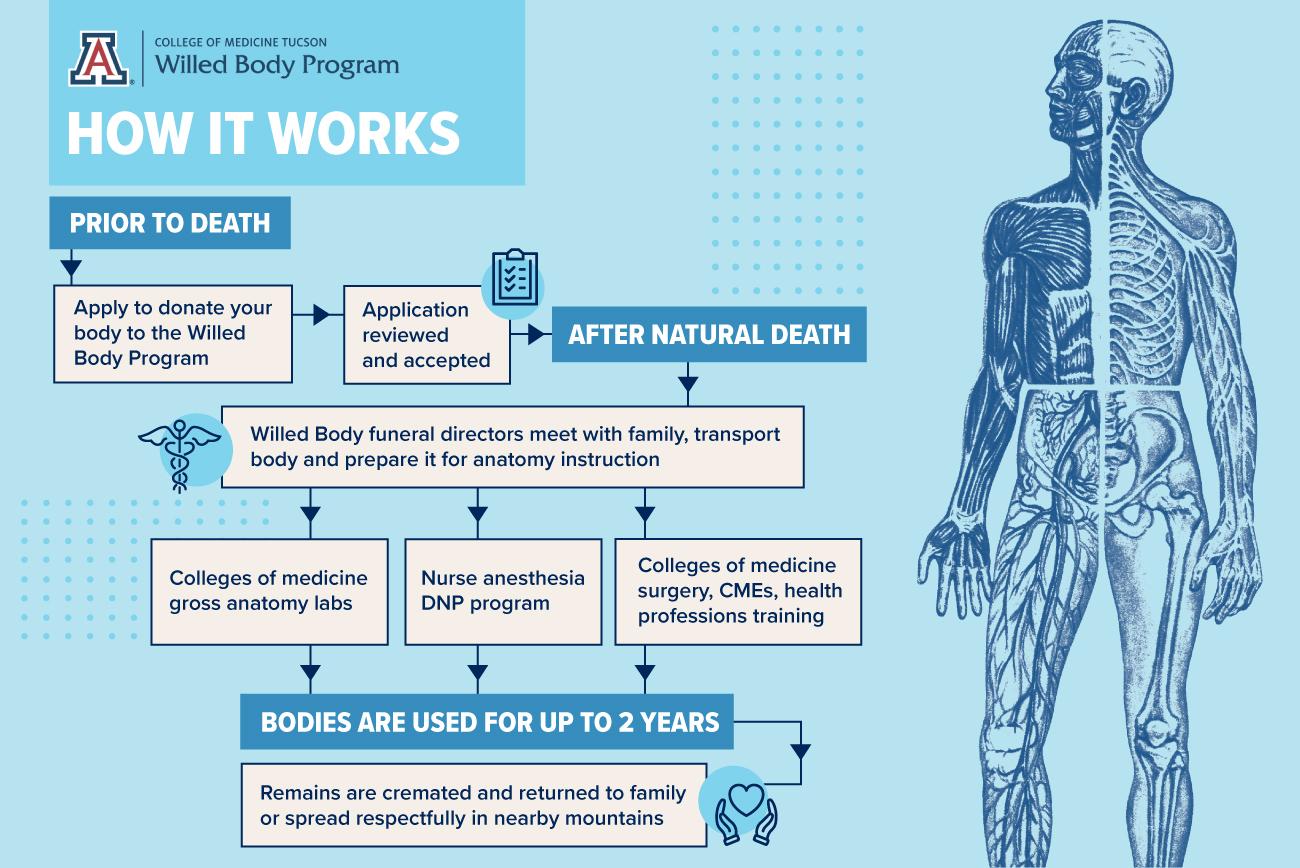 Jared has been with the program 12 years, and Kat for seven. Both hold associate’s degrees in mortuary science and served three-year apprenticeships before being licensed as morticians.

“I’ve worked at places without an in-house willed body program, where you deal with a third party,” said James Proffitt, PhD, College of Medicine – Tucson lead instructor for the gross anatomy lab and cellular and molecular medicine assistant professor. “Having two trained funeral directors and morticians – people who really understand the process of grief and dying – makes this so much more community oriented, humanistic, engaging and empathetic with what donors and students need.

“I take the same approach as if I were at a funeral home, but feelings surrounding death are slightly less intense. The donors who participate in the Willed Body Program want to be here and most express their excitement at being able to contribute to medical education.”
Kat Alvarado, UArizona Willed Body Program funeral director, embalmer and coordinator

“The donor families are very used to working with Kat and Jared,” Dr. Proffitt said. “They understand their best interests are looked out for by those two. It creates this kind of community, this family of donors. And this is something I try to impress on our students. These donors aren’t people from somewhere else. They’re Arizonans. They’re our neighbors.”

Kat said her interest in the field was piqued in college, when she worked as a funeral home service attendant. She later served as an embalmer, cremationist and funeral director for a funeral home.

At UArizona, she said, “I take the same approach as if I were at a funeral home, but feelings surrounding death are slightly less intense. The donors who participate in the Willed Body Program want to be here and most express their excitement at being able to contribute to medical education.”

Unlike his wife, Jared said he “sort of fell into” his career as a funeral director. 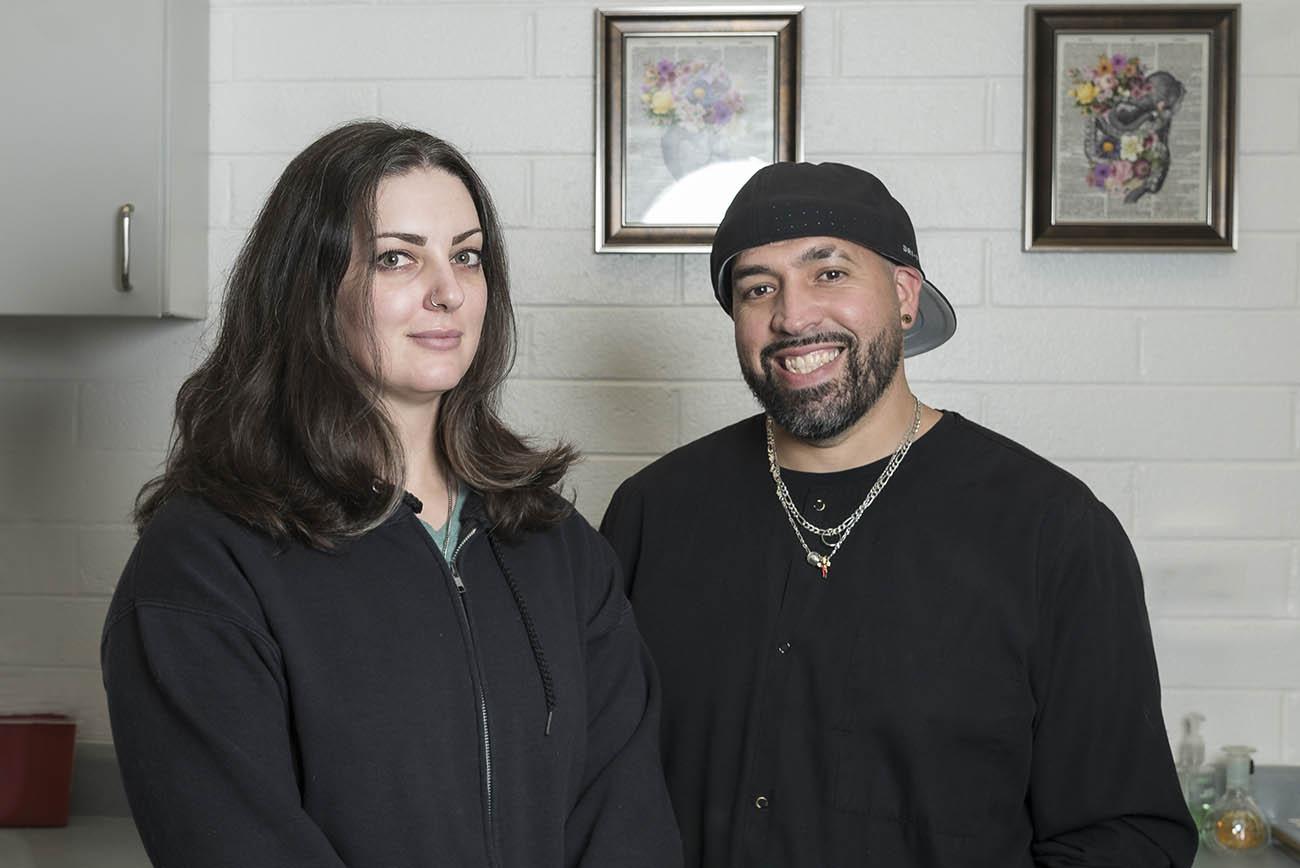 After he graduated from high school, he took a job answering the phone at a funeral home. He started working with decedents his second day on the job. He went to mortuary school in Dallas, apprenticed in Texas and Arizona, and served as a crematory operator and embalmer before joining the Willed Body Program.

“Death is hard on the families. But, at the same time, it’s great to hear how proud they are of their loved one donating their body to students for education,” Jared said of what families say when he and Kat pick up a donated body. They hear similar comments at an annual willed body ceremony that offers donor families a chance to honor their loved ones.

Nearly 400 people attended the Willed Body Memorial Service in March. Among the speakers were the Alvarados, Dr. Wilson and medical students who expressed their gratitude for the donors’ “beautiful and lasting gift” to help them better learn their craft.

Jared does outreach to local high schools, talking to students about his experiences while encouraging others to follow in his footsteps.

“My outreach to youth is important to me,” he said. “I wish I had someone who came to my high school to speak about these types of professions. It’s my way of helping out as best I can.”

More than just a vocation 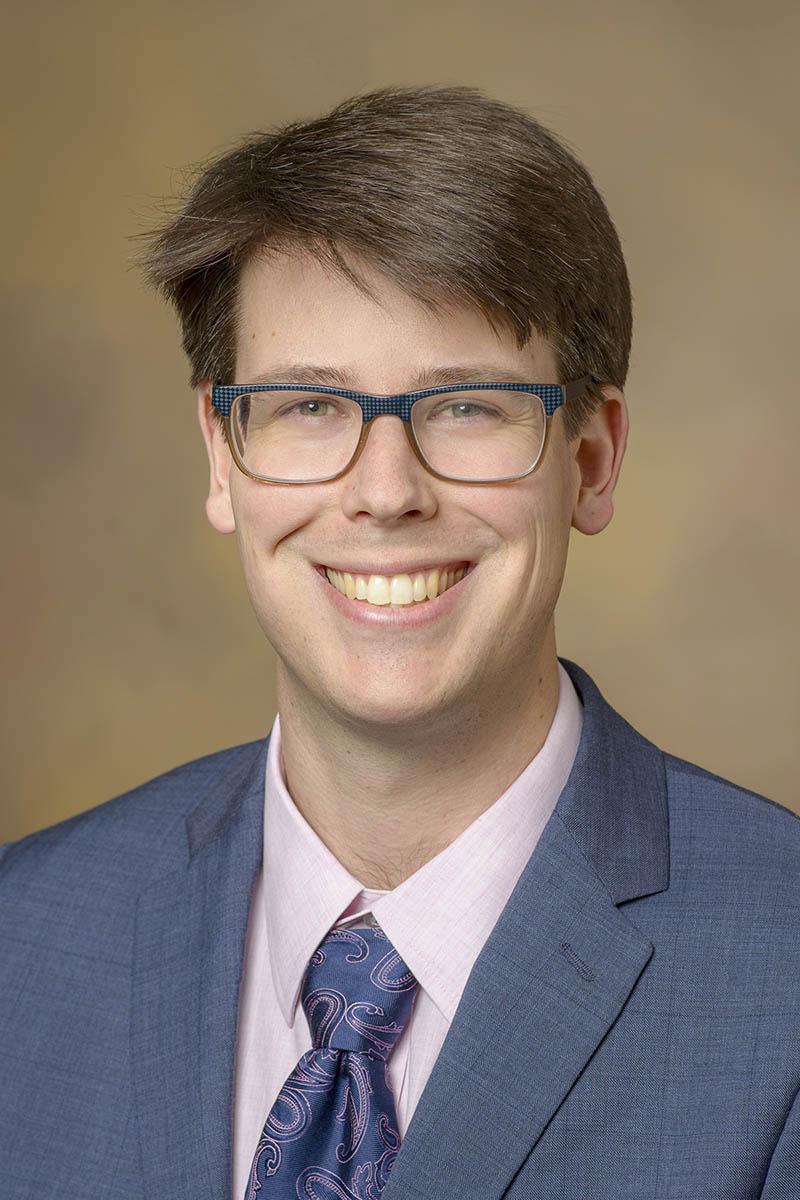 The Alvarados are more than morticians. They also help fulfill continuing education needs for faculty physicians and nurses. In 2015, Jared Alvarado won the College of Medicine – Tucson’s Appointed Personnel Lura Hanekamp Award of Excellence for the part he plays in education for students, physicians and health professionals.

In 2019, Kat won a UArizona Individual Award for Excellence for her dedication to handling the program’s administrative needs as Willed Body Program coordinator.

Jared also helps write academic papers related to the program, including a 2019 article on donor bodies used for “students teaching students” as a novel solution to time demands on doctors.

The program also hosts training opportunities for other medical professionals where staff need to understand human anatomy, including paramedics, emergency medical technicians and military health personnel. Jared assists in some training, including non-UArizona instruction for Davis-Monthan Air Force Base staff.

“It usually is just myself and their instructors, so I’m able to show them techniques and things I’ve learned as part of the College of Medicine,” he said.

Both are on call 24/7 to ensure the Willed Body Program’s ongoing success, whether that involves working with instructors to help design specific training or traveling across the state to pick up donor bodies from a family or funeral home.

That’s important, Dr. Proffitt said, because donors’ bodies are the “canvas” upon which students and trainees learn to practice their art as healers. Without them, there is no healer’s art.