In possibly the first mother-daughter hooding ceremony at the college, Katie DiBene will follow in her mother’s footsteps.
August 23, 2022 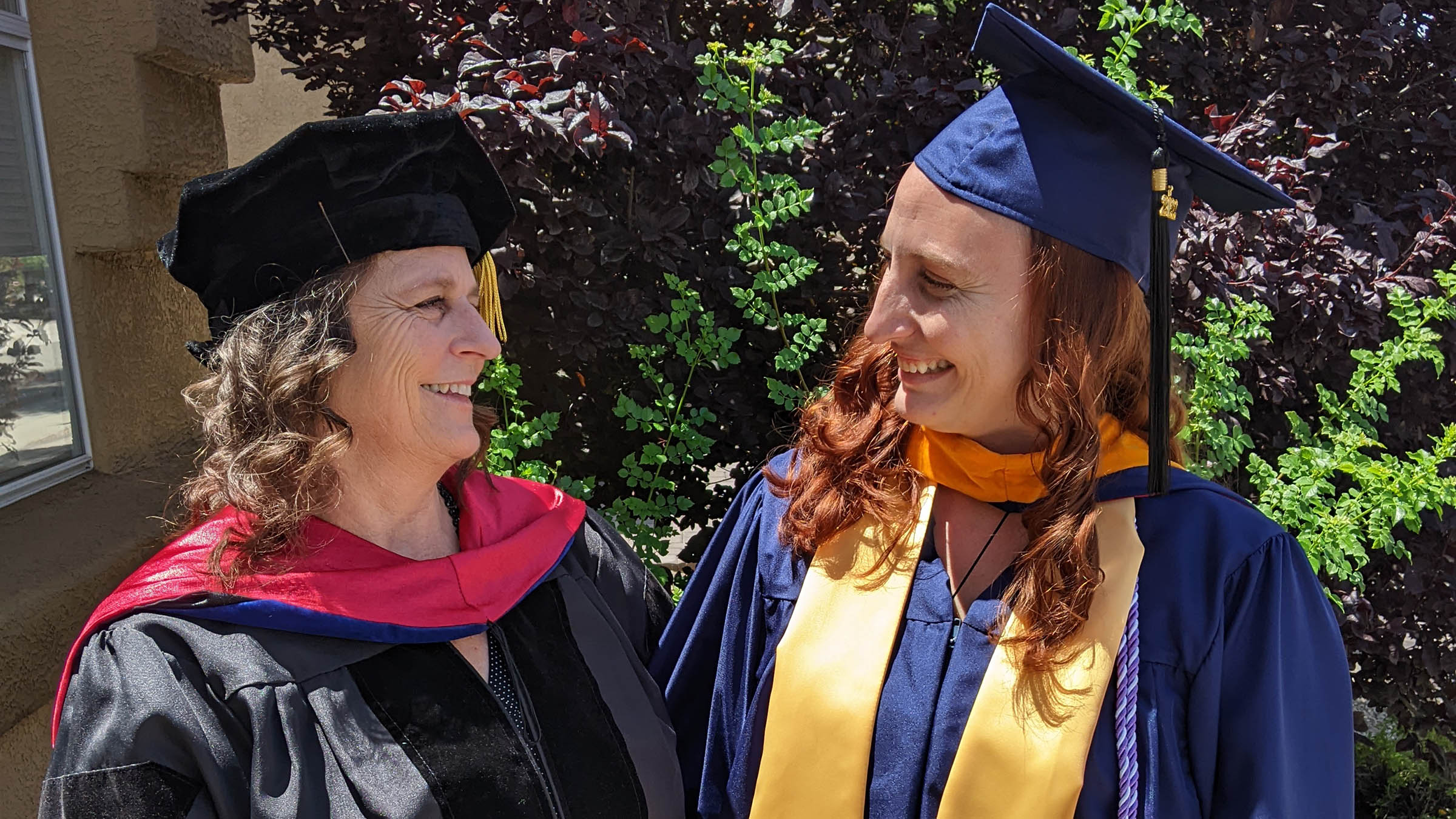 Assistant Clinical Professor Lorre Laws, PhD, and her daughter Katie DiBene, who graduated from the College of Nursing’s Master of Science for Entry into the Profession of Nursing program.

The hooding ceremony is a pivotal moment for master’s degree students. When a faculty member invests their hood over the student, it signifies the student's successful completion of their graduate program. It’s a proud moment both for faculty members and students. But for Assistant Clinical Professor Lorre Laws, PhD, and her daughter Katie DiBene, the University of Arizona College of Nursing’s summer convocation ceremony on Aug. 11 had a special twist. 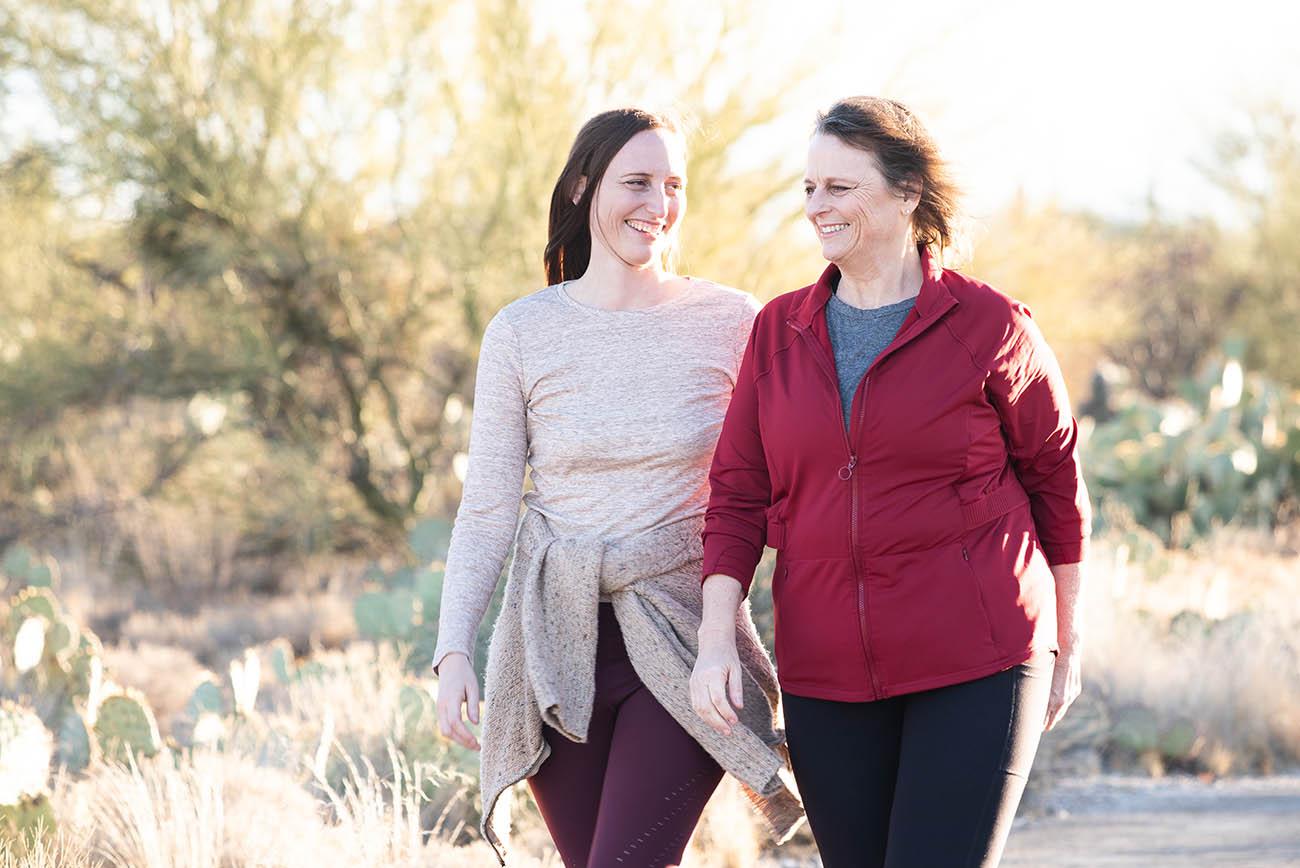 In what is possibly the very first mother-daughter dyad in the program’s history, Dr. Laws proudly hooded DiBene, who graduated from the Master of Science for Entry into the Profession of Nursing (MEPN) program.

“From the time my kids were young, my job was always to follow their bliss,” said Dr. Laws, who graduated from the MEPN program in 2013. “Never did I forecast that my daughter would pursue the same career path as I did. I’m so very proud, but I’m also so humbled that she would resonate facilitating healing as deeply as I do. It’s a proud mom moment, but it has deeper connections to our shared healer’s heart.”

Dr. Laws and DiBene’s urge to care for society’s most vulnerable people caused their professional aspirations to intersect, albeit through different pathways. After a midlife career pivot out of the real estate industry, Dr. Laws devoted her energies to nursing.

“I wasn’t making a difference in the way I was called to do,” she said. “So, I went through the MEPN program and I just flourished.”

She fell in love with nursing as a profession and as a discipline, but also found she loved teaching and research. Her path from MEPN student to Doctor of Nursing Practice student to faculty member was marked by strong mentorship and guidance from college faculty, a dynamic she watched play out when it came time for her daughter to go through the program.

“It’s one thing to see me benefit, but it’s a whole other thing when you’re watching your child go thru this process and see how richly she was supported and mentored by the MEPN faculty,” Dr. Laws said. “It was truly beautiful to behold.”

For her part, DiBene gravitated toward nursing after her aspirations to join the Peace Corps fizzled in the wake of COVID-19. Having watched her mom go through the UArizona program, she knew it was a career that could afford her the opportunity to further her dream of working with rural, Indigenous populations. She knew how much her mom loved the profession, and she saw it as a great opportunity to join a profession that carries a lot of stability.

“She definitely influenced me to get into MEPN,” DiBene said. “Before joining the program, seeing that she went through it, that she could do it.”

Dr. Laws was a resource throughout DiBene’s time in the program. “If I had questions or if there was something I didn’t understand from the professors, she was a great resource because she had been through the program herself,” DiBene said. “And she was my mom, so it was a win-win because we already have a relationship.”

DiBene found the 15-month program fast-paced and challenging, but she worked hard and gained confidence, ultimately earning a 4.0 grade average. In her final semester, during her preceptorship, she decided she would pursue hospice work, which is what she plans to pursue after convocation.

“It's hard and fast but you learn a lot,” she said. “You gain a lot of knowledge and a lot of skills about how to care for people and what resources there are in the community.”

In the future, she hopes to offer her skills to help vulnerable, rural populations internationally.

As a professor, Dr. Laws was delighted to watch her daughter learn from some of the same instructors she did during her time in the MEPN program – as well as her current colleagues. When convocation rolled around and the two of them took the stage together, albeit with different roles, she was overjoyed.

“My mom heart is full,” Dr. Laws said, reflecting on the moment she got to hood DiBene. “When you have them in your arms as an infant, you can never in a million years forecast this parallel path that we find ourselves on. As both a mom and as a nurse faculty member, it’s so rich. There have been so many students that I have taught along that way that I don’t have the opportunity to hood or pin, so not only am I hooding my daughter, but it’s a moment where I can celebrate all the students that I’ve had the privilege of supporting along the way.”

A version of this story was originally published by the College of Nursing.