Dr. Carlos Gonzales, a sixth-generation Tucsonan of Yaqui and Hispanic heritage, brings spirituality to his roles at the College of Medicine – Tucson.
November 21, 2022 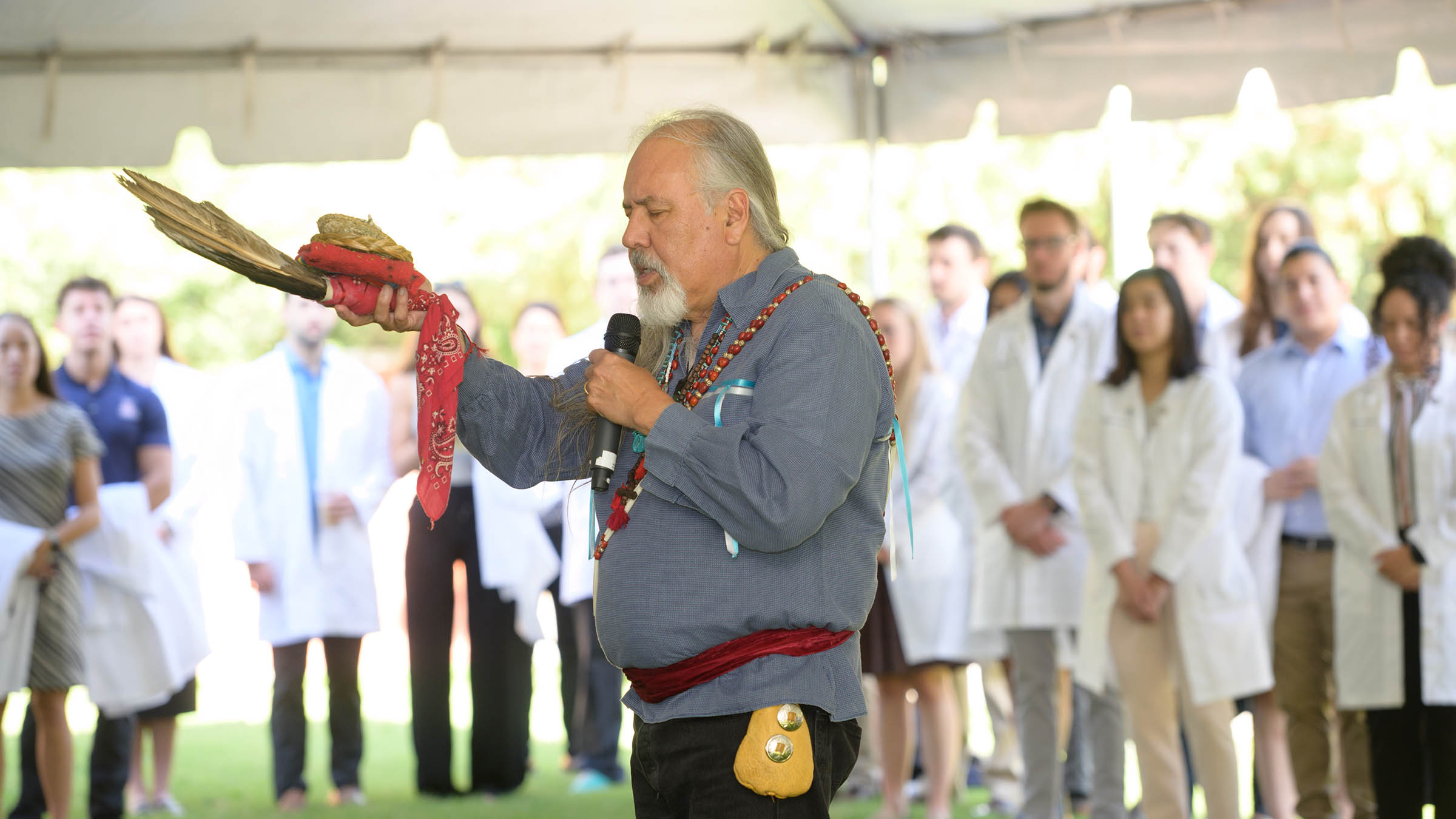 Carlos Gonzales, MD, a native Tucsonan of Yaqui and Hispanic heritage, has brought the soft power of spirituality to his roles as director of the Commitment to Underserved Peoples and Rural Health Professions programs at the College of Medicine – Tucson.

When events at the University of Arizona Health Sciences begin, Carlos Gonzales, MD, a University of Arizona College of Medicine – Tucson associate professor of family and community medicine, can often be seen with an abalone shell filled with smoking sage and cedar to offer a ceremonial Native American blessing.

That’s only one of many hats he wears at the college, including assistant dean for curricular affairs, committee chair of the Primary Care Physician Scholarship program, and director of the Rural Health Professions Program (RHPP) and Commitment to Underserved Peoples (CUP) volunteer program. The last two roles make him head of the college’s Rural Health and Community Service Distinction Tracks, as well.

A Tucson native of Mexican and Yaqui descent, he’s also a hereditary link to a line of healers whose roots reach back to the 1840s and earlier, to a time before Arizona was part of the United States.

At the inaugural address of a new Heritage Healing Practices lecture series, Dr. Gonzales and his sister, Adela Gonzales, laid out their family history of grandmothers and great-grandmothers who served as “yerberas,” “parteras,” “sobadoras” and “curanderas” – herbalists, midwives, massage therapists and healers – practicing traditional folk medicine.

Looking behind and ahead

Upon reflection, he noted his career has largely been one of soft power and inspiring positive change by example. Graduates of all backgrounds, but especially Native American or Latino, often cite him as a mentor.

“My whole emphasis has always been on cross-cultural medicine, border health and access to care for uninsured and underserved people,” Dr. Gonzales said. “By participating here at the University of Arizona and the College of Medicine, I have quietly and subtly influenced a lot of the ideology here, where we're recruiting students that have a desire to help other communities, strongly support diversity, and are willing to advocate for improvement of health care for underserved populations.”

Dr. Gonzales is plainspoken, frequently noting milestones of his life by humbly saying, “So, I did that,” or “I really enjoyed that.” His path to medicine was a matter of taking advantage of opportunities as they arose, he said.

His Pascua Yaqui father was a roofer with a third-grade education. His Mexican American mother went further but wasn’t a good student, he said. He was the first high school graduate in his father’s family.

“My whole emphasis has always been on cross-cultural medicine, border health and access to care for uninsured and underserved people.”
Carlos Gonzales, MD

“I didn't know what I was going to do after high school, unfortunately. I was good in math and science, but I had no goals at the time because everybody in my family was either a miner, construction worker or lived on the wrong side of the law, smuggling drugs,” Dr. Gonzales said.

Then, a UArizona student he knew suggested he join Med-Start, a summer academic enrichment program to improve access for high schoolers interested in the health professions.

So, instead of moving hot tar from kettle to roof under a sizzling summer sun with his father, he opted for a post in an air-conditioned university science lab. The work inspired him to go to college and become a doctor to ease the urban physician shortages he knew all too well.

“The fact was there were no doctors on the south side of Tucson. If you wanted to be seen, you had to go to Tucson Medical Square or Thomas Davis, all of which were in midtown,” Dr. Gonzales said. “A few other doctor’s offices were around Tucson Medical Center and St. Mary’s, which were difficult to get to with a big extended family and only one car.”

As a child, he recalled going occasionally to doctor visits with his great-grandmother. She was the one who was an herbalist.

“They didn't have anybody to leave me with, so I would tag along,” he said. “She was Spanish-speaking, and the docs didn't treat her well. I saw how she was treated, and it was rather rudely and sarcastically with no sensitivity whatsoever to cultural differences.”

He sought to change that.

Dr. Gonzales got a scholarship to complete his undergraduate studies at Carleton College, a private liberal arts school in Northfield, Minnesota, near Minneapolis. Each summer, he worked as a minority recruiter for the college across the Southwest, staying overnight with friends in Albuquerque or El Paso when necessary.

He returned to Tucson in 1977 as a medical student at the College of Medicine – Tucson and continued with Med-Start as an unofficial student counselor. He and seven classmates (six Latino and one Hopi) also began health education outreach for elementary and middle school students and, with faculty assistance, won a grant that launched what became the CUP Program in 1979.

He went to the University of New Mexico in Albuquerque for residency training in 1981 and completed a fellowship in adolescent medicine. His focus was on adolescents with drug problems in juvenile detention centers. He hoped to help kids like those he knew growing up, he said.

His participation in the Arizona State Loan Repayment Program, which, like the PCP Scholarship, helps make doctors available in medically underserved areas, brought him back to Tucson for three years of service. He spent eight years at El Rio Health (1985-93), serving as medical director the last four years.

Tiring of administrative duties – “not my thing,” he said – he took a friend’s advice to fill a vacancy for a rural physician in Patagonia, Arizona. His wife grew up on a ranch and wanted their children to have that rural experience, too. Their home was outside of Nogales, near enough to make it a short commute to Patagonia.

“From ’93 until 2006, I was the only doctor in Patagonia. My service area was 1,600 square miles, stretching from Nogales to Sierra Vista, from the border to I-10. I really enjoyed being that old-time country doc where you depended on your skills as a physician, listening to people, examining them, putting together the story so it makes sense, and coming out with a diagnosis and treating them. It perfected my clinical skills.” 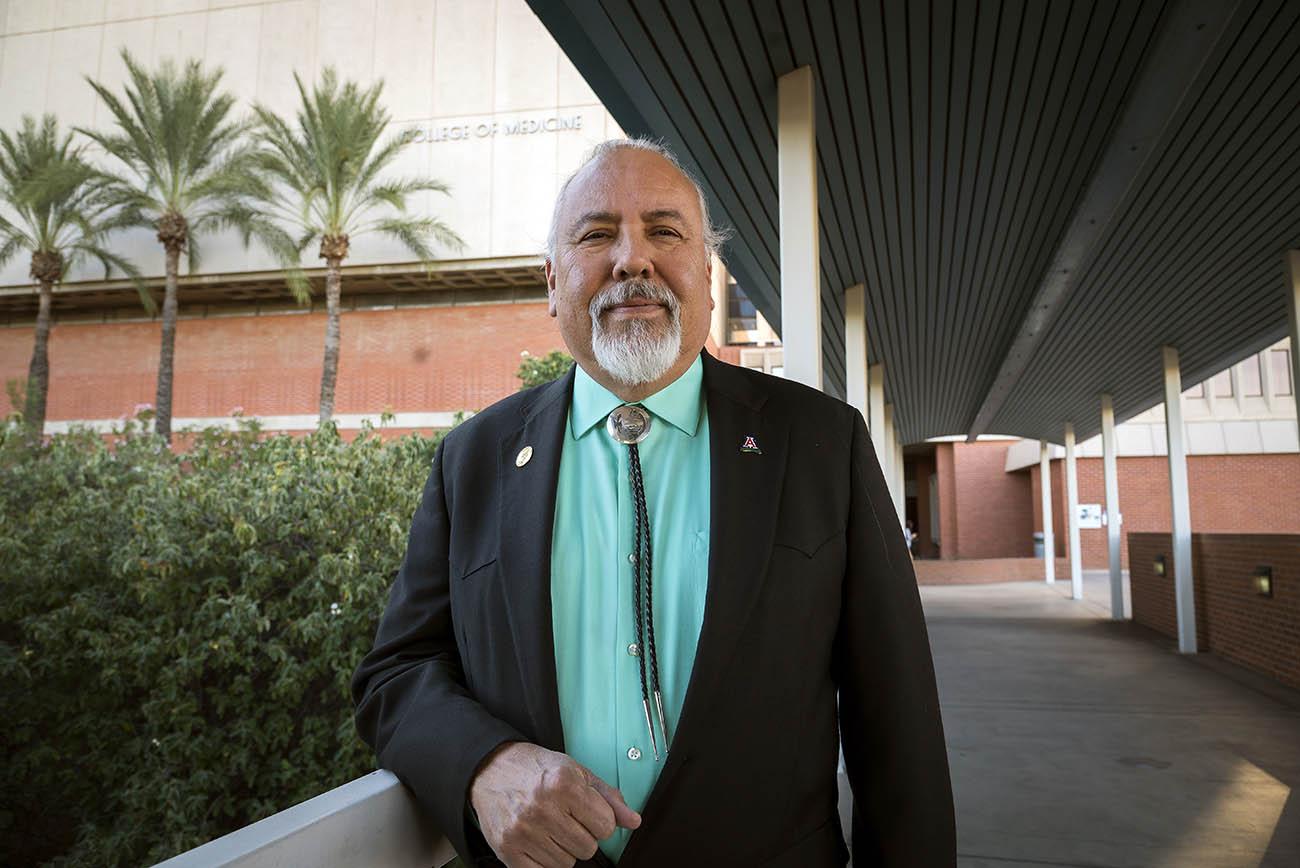 He was active with the Arizona Academy of Family Physicians and Arizona Association of Community Health Centers. During former President Bill Clinton’s administration, he was appointed to the U.S.-Mexico Border Health Commission, where he collaborated on cross-border projects to help people.

“Then, boom, 9/11 happens and the border gets closed. All that cooperation goes down the drain,” he said. “All those programs we planned were gone.”

In 2006, he left his practice to join the college as a full-time faculty member.

“But the whole time, I maintained my political activity, and I got onto the national board of the American Academy of Family Physicians,” Dr. Gonzales said. “This was before the Affordable Care Act. We were in fact advocating for a program like the ACA, and I was very involved with that. I also currently serve on the board of directors for the American Board of Family Medicine.”

Dr. Gonzales is leaving his posts in the College of Medicine – Tucson in January, but plans to continue working part time with Global MD, a UArizona Health Sciences initiative and partnership with the University of Western Australia.

“It's a two-and-two program – two years in Western Australia and two years in Arizona. I'll be working on the Arizona component,” Dr. Gonzales said.

Global MD’s focus on rural medicine and Indigenous populations will allow him to teach students about Native American health issues. He’s excited about that, having worked successfully throughout his career to integrate Western and Native healing practices that focus on healing the spirit as well as the body.