Parent-child faculty combos have a deeply invested view on how the College of Medicine – Tucson has evolved over the past 55 years.
November 17, 2022 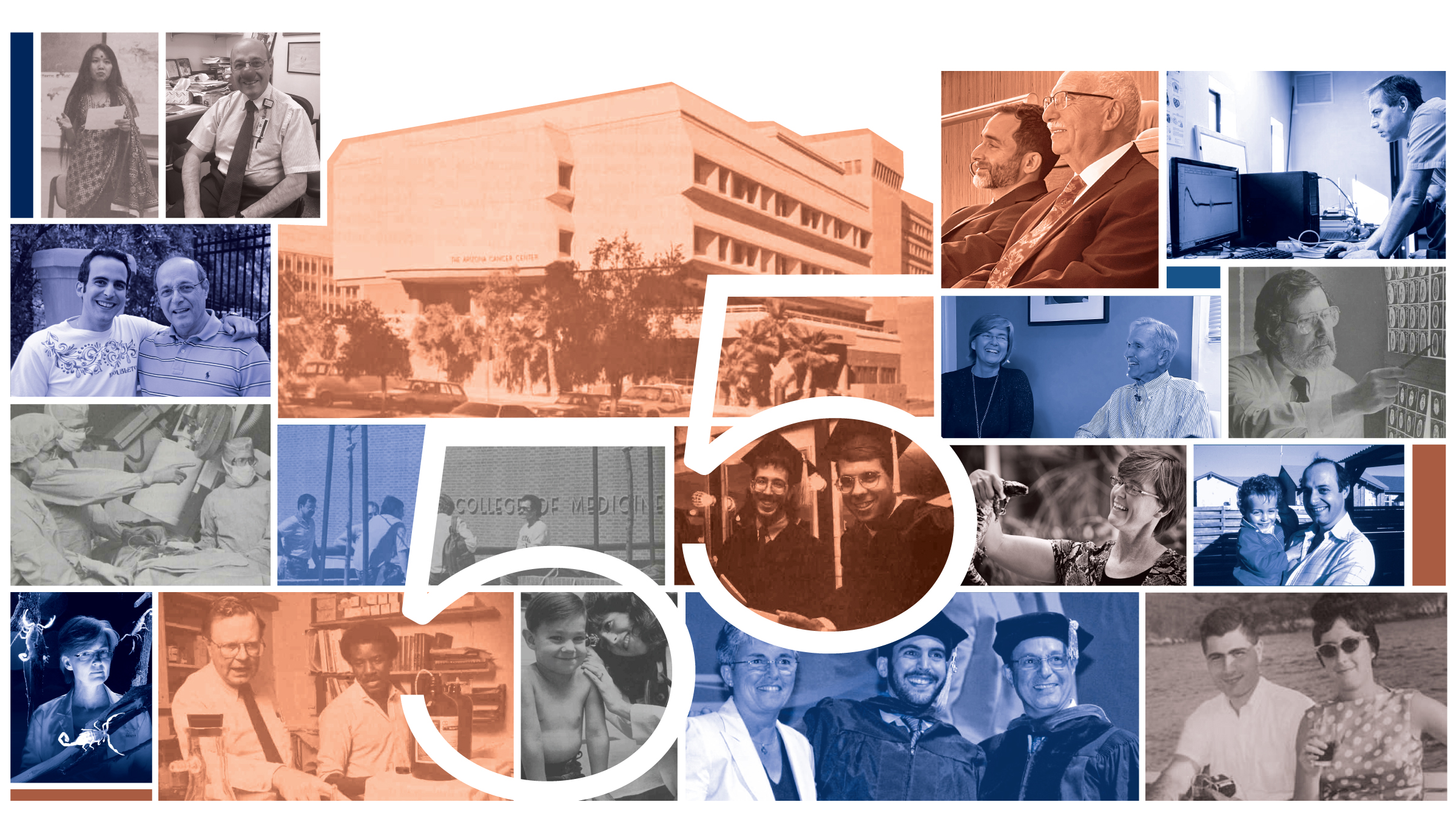 The University of Arizona College of Medicine – Tucson celebrates its 55th anniversary this month.

Careers in medicine can be generational choices, with children following in their parents’ footsteps to become physicians or medical researchers. A 2020 Stanford University study found that people born in the 1980s were three times more likely to follow in a parent’s footsteps and become a doctor than those born in the 1950s. 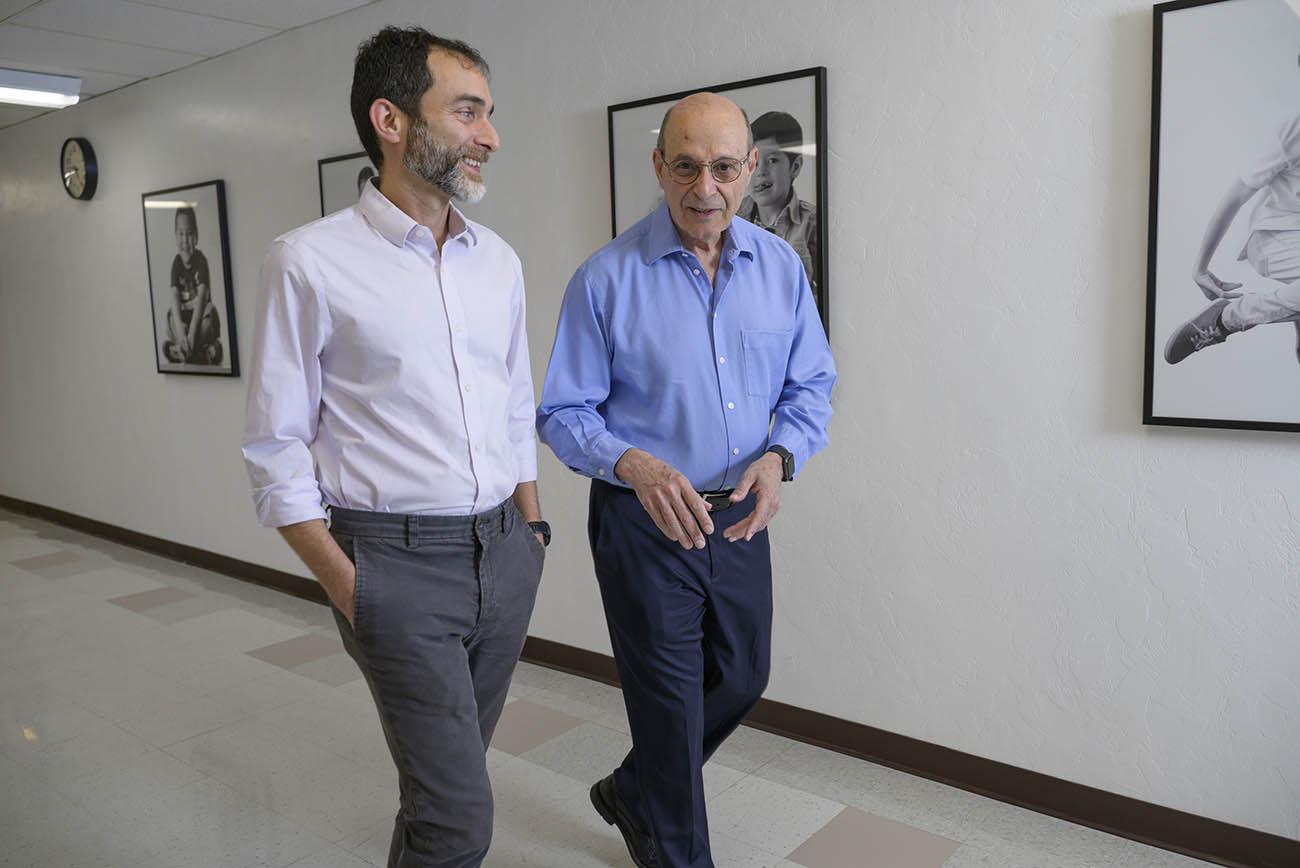 At the University of Arizona College of Medicine – Tucson, which is celebrating its 55th anniversary this month, a number of parent-child faculty dyads offer a multigenerational history for students and trainees.

Kareem Shehab, MD’s first experience working with his father, Ziad Shehab, MD, came as a College of Medicine – Tucson third-year medical student in 2005, during his pediatrics clerkship. The senior Shehab was chief of the Department of Pediatrics Division of Infectious Diseases and departmental clerkship director.

“It was great, but also kind of funny,” said Kareem, whose brother, Samir Shehab, MD, also earned his medical degree from the College of Medicine – Tucson and is a pediatrician in Vancouver, Washington.

“My dad was a little harder on me than on the other students, asking me to spell the names of antibiotics and things like that. He told me later the moment he realized he wasn’t young anymore was when his own son was his student.”

Dr. Ziad Shehab, recently retired, came to the U.S. in 1976 after graduating from medical school at the American University of Beirut. He completed his pediatric residency at the University of Virginia, where he was chief resident. Afterward, he did a fellowship in infectious diseases at the University of Texas Health Sciences Center in San Antonio. He arrived in Tucson in 1983. His wife, Leila Shehab, also worked in health care at Eclipsys Corp., now part of Allscripts, and later as Tucson Medical Center’s information services director. She retired in 2016.

Dr. Kareem Shehab, also an infectious diseases specialist, took over the clerkship directorship from his father last year and is one of the pediatric residency program’s associate directors.

At his father’s retirement party, Kareem said, “It’s always been hard to separate his being my father with being my colleague.”

A decision the younger Dr. Shehab made after joining the College of Medicine –Tucson faculty in 2012 exemplified that. “After a lot of hand-wringing, I decided I would refer to him the same way everyone else does: ‘Z.’ So, at peace with this decision, I marched to the PICU to discuss a patient he’d signed out to me, and no sooner had I said to Dr. Mary Gaspers, ‘Well, last week, when Z saw this kid…’ – she stopped me and blurted out, ‘That’s what you call him?’ So, from then on, it was back to Dad, which honestly was what felt most natural anyway.” 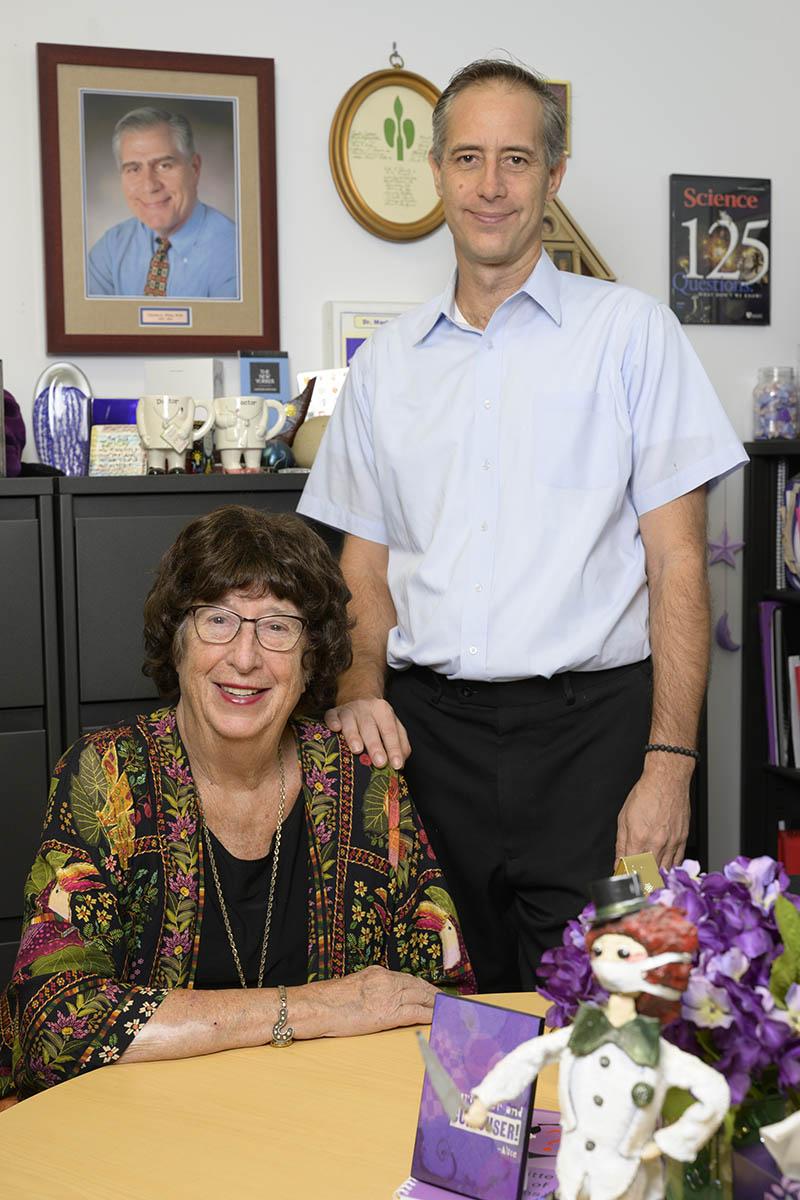 Marlys Witte, MD, and her son, Russ Witte, PhD, have worked together at the college since 2007, when he joined the Department of Medical Imaging where he’s now a professor. He’s also a member of the UArizona Cancer Center, Sarver Heart Center and BIO5 Institute, and has additional faculty appointments in biomedical engineering, optical sciences, surgery and neurosurgery.

Marlys and the late Charles “Chuck” Witte, MD, were founding faculty members in the college’s Department of Surgery. A professor, she’s a member of the Cancer Center and Sarver Heart Center with additional faculty appointments in neurosurgery and pediatrics. Upon their arrival in 1969, Chuck and Marlys established a lab for basic and clinical investigation of lymphatic circulatory disorders. Chuck won international fame for his landmark lymphology studies and practiced abdominal and trauma surgery until his death in 2003.

Chuck and Marlys also collaborated to develop the Curriculum on Medical Ignorance to improve understanding of evidence-based medicine and the scientific method. Taught during the Summer Institute on Medical Ignorance, the curriculum remains popular among high school, undergraduate and medical students.

Marlys has been director of the college’s Medical Student Research Program since 1982. She noted her teaching philosophies overlap with her son’s special emphasis on curiosity, asking questions and solving problems. 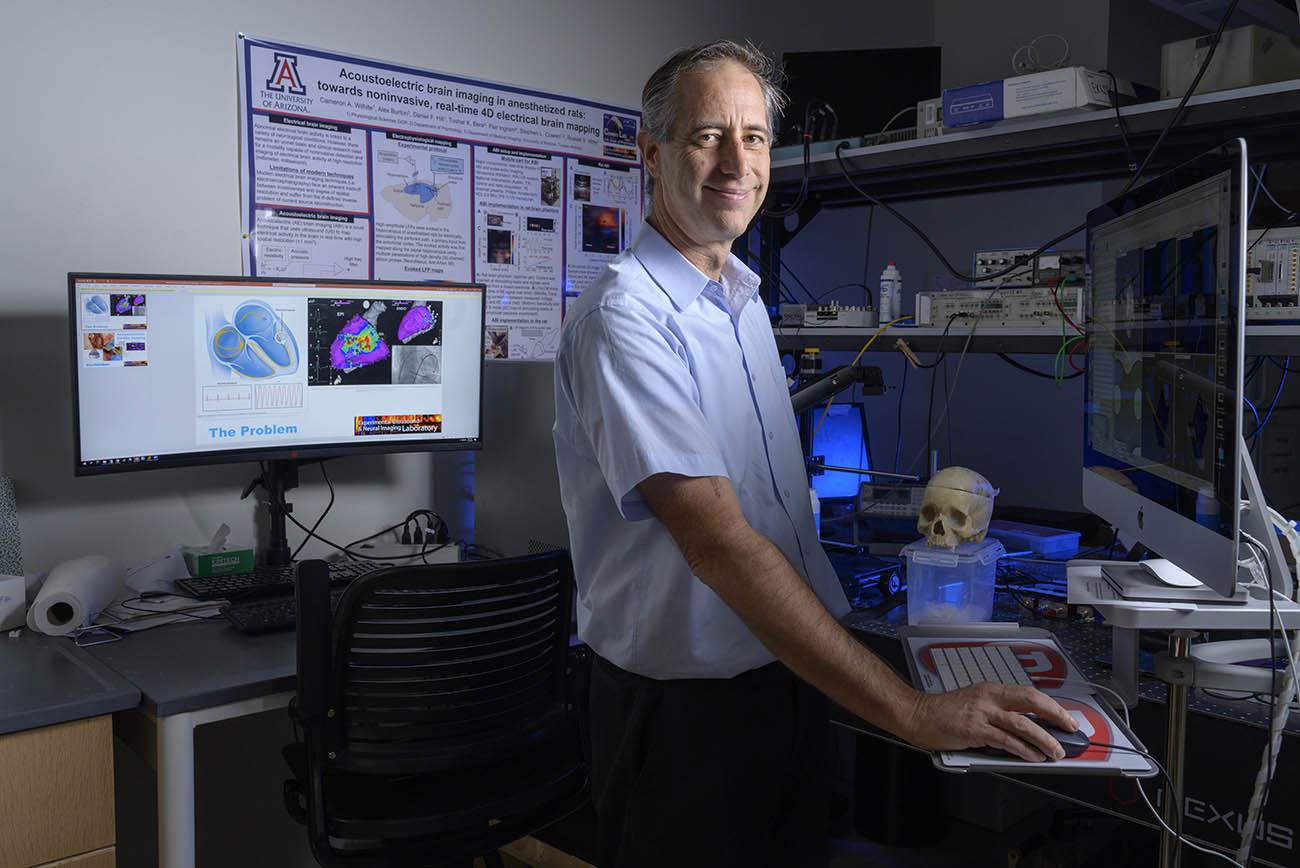 “Our relationship has helped build new collaborations, translational research projects and unique training opportunities for students at all levels,” she said of her son. “I believe the influence of his parents (me and Chuck) along with other great mentors in college was quite influential in him developing his own passions and eventually his career as a biomedical engineer and physicist.”

“I knew early on in life my interests and goals would be separate from my mom and dad,” said Russ, who, as a child, would tell people he wanted to be a weatherman or inventor. “I was interested in building things, taking them apart and putting them back together. In fact, my dad and a U of A physicist helped me build a tornado machine for my science project at Safford Junior High.”

Deep roots in the Old Pueblo

Leslie Boyer, MD’s father, John “Jack” Boyer, MD, was another of the college’s founding physicians. He launched three divisions – geriatrics, hematology and rheumatology – in the Department of Medicine and co-founded the UArizona Arthritis Center with Eric Gall, MD, and the UArizona Center on Aging with Theodore Koff. 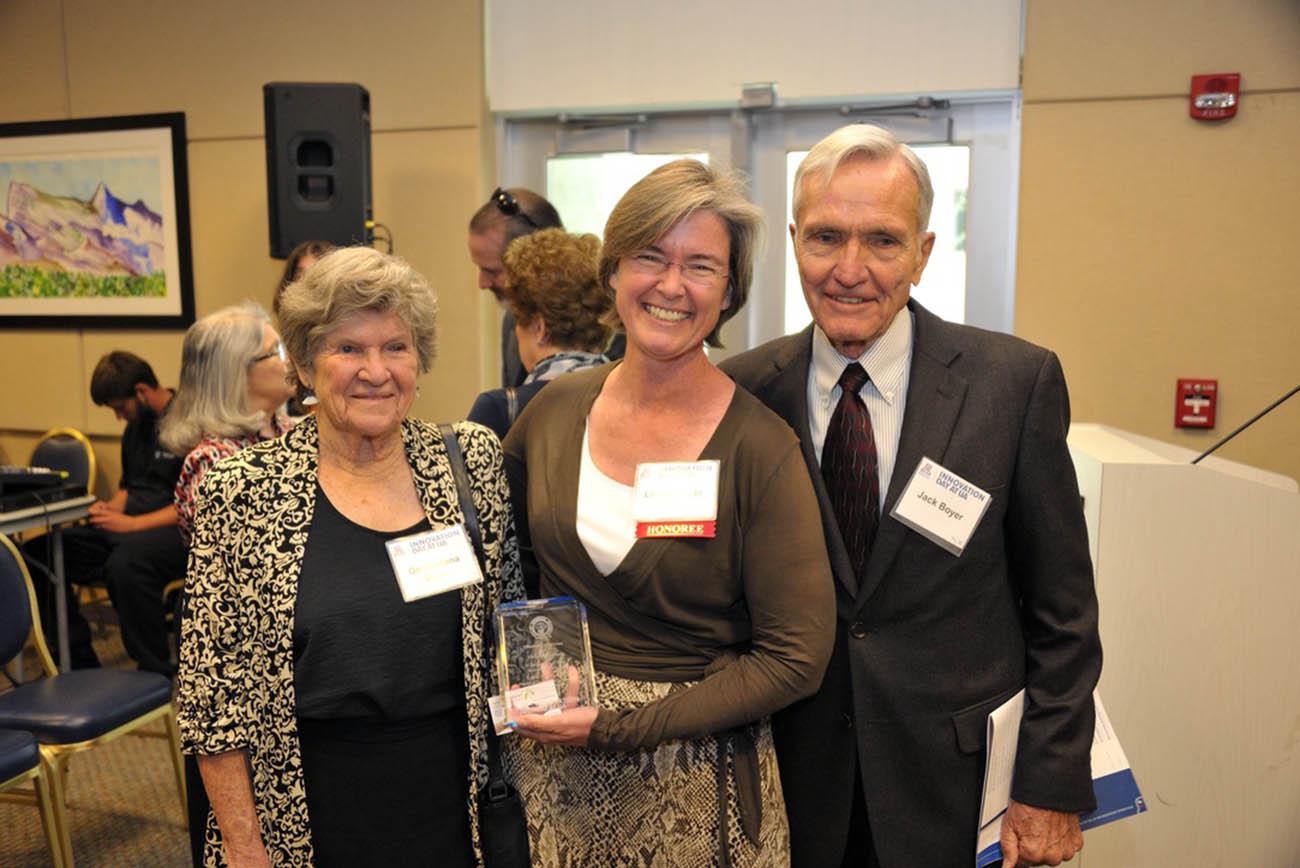 Leslie and current Center on Aging Director Mindy Fain, MD, and Rosemary Browne, MD, co-authored an article, “Reflections of an Aging Geriatrician,” published in May in the Journal of the American Geriatrics Society. It was based on an acceptance speech Jack, now in his 90s, gave when he received the 2021 Lifetime Achievement Award from the Arizona Geriatrics Society.

Both Leslie’s maternal grandparents and her mom, Georgiana “Georgie” Boyer, MD, were UArizona graduates, as were uncles, aunts, cousins and brothers. Her mother was valedictorian in 1951 before earning her medical degree from Harvard University, where she met Jack. Years later, Georgie, who “gave up science” to raise a family, rejoined medicine and completed her family practice residency at the college. “She was, I think, the oldest person ever to finish,” Leslie said.

Leslie graduated from UArizona in 1981, went to Harvard for her medical degree and returned in 1987 to finish her pediatric residency and toxicology fellowship. She joined the faculty in 1991 in pediatrics, with appointments in pharmacology and pathology. She founded the Venom Immunochemistry, Pharmacology and Emergency Response (VIPER) Institute and, at the R. Ken Coit College of Pharmacy, was UArizona Poison and Drug Information Center medical director. A world-renowned expert on critters that bite and sting, she’s now retired but frequently quoted in the media to this day. 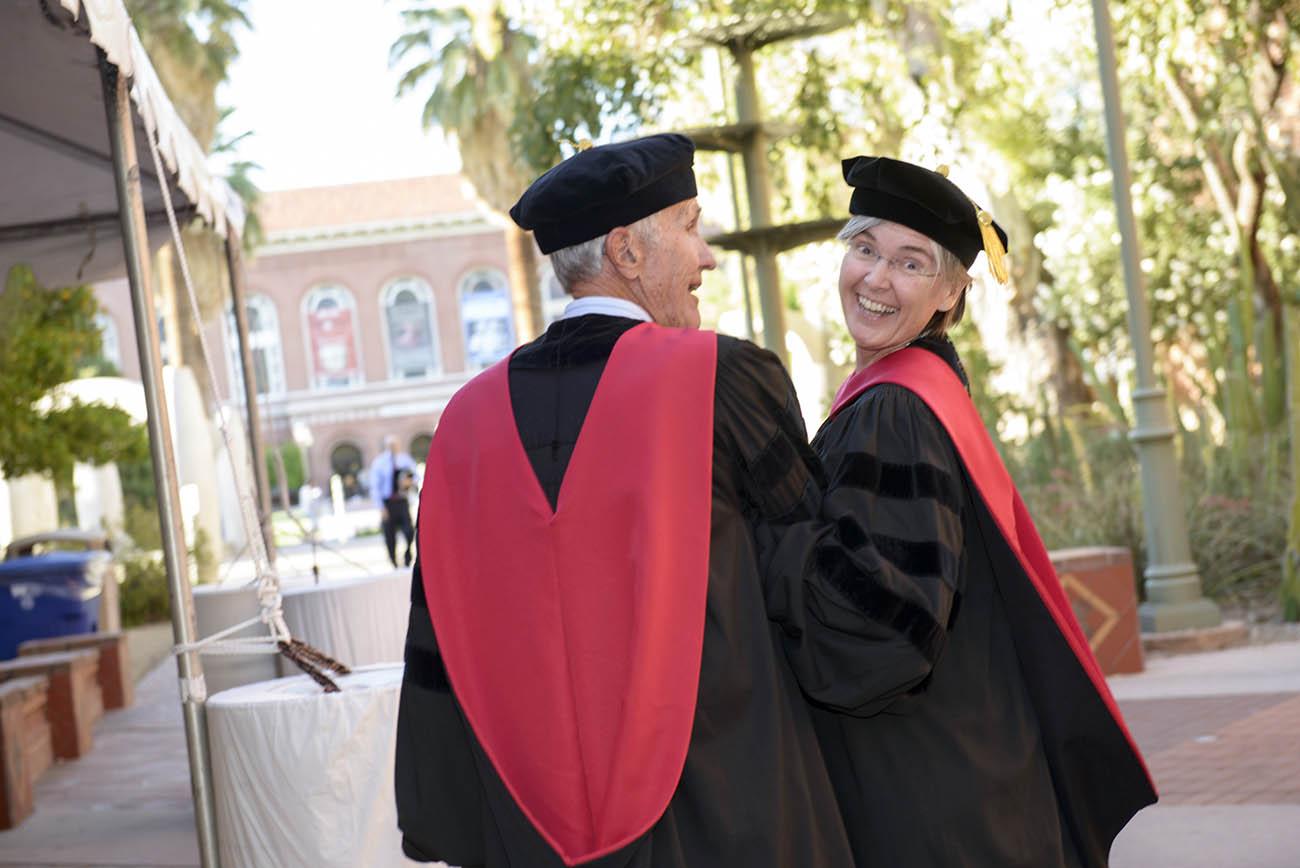 “Dad taught me the fundamentals of being a physician,” Leslie said. “He and I spoke for hours about blood and bones and muscles and joints, and also about the ethics of taking good care not only of people that are easy to like, but also of criminals and competitors and plain old jerks. A good doctor has to acknowledge their own deepest prejudices, internally, and overcome them in pursuit of ideals.”

When Leslie retired in 2017, she and her dad had a special moment marching together at graduation up to the dais at Centennial Hall. “That was exactly 100 years from when my grandmother graduated from the U of A,” Leslie said.

“For what it’s worth, my great-grandfather Godfrey Sykes helped the U of A’s astronomers build telescopes and was much involved in the desert lab at Tumamoc Hill,” she added, proving that family ties to the university run strong.