Countering a Lifetime of Assumptions About People with Disabilities

To better serve patients, health professionals must break out of their silos and work in interprofessional teams. University of Arizona Health Sciences interprofessional events prepare students for this future through shared learning experiences.
February 24, 2020 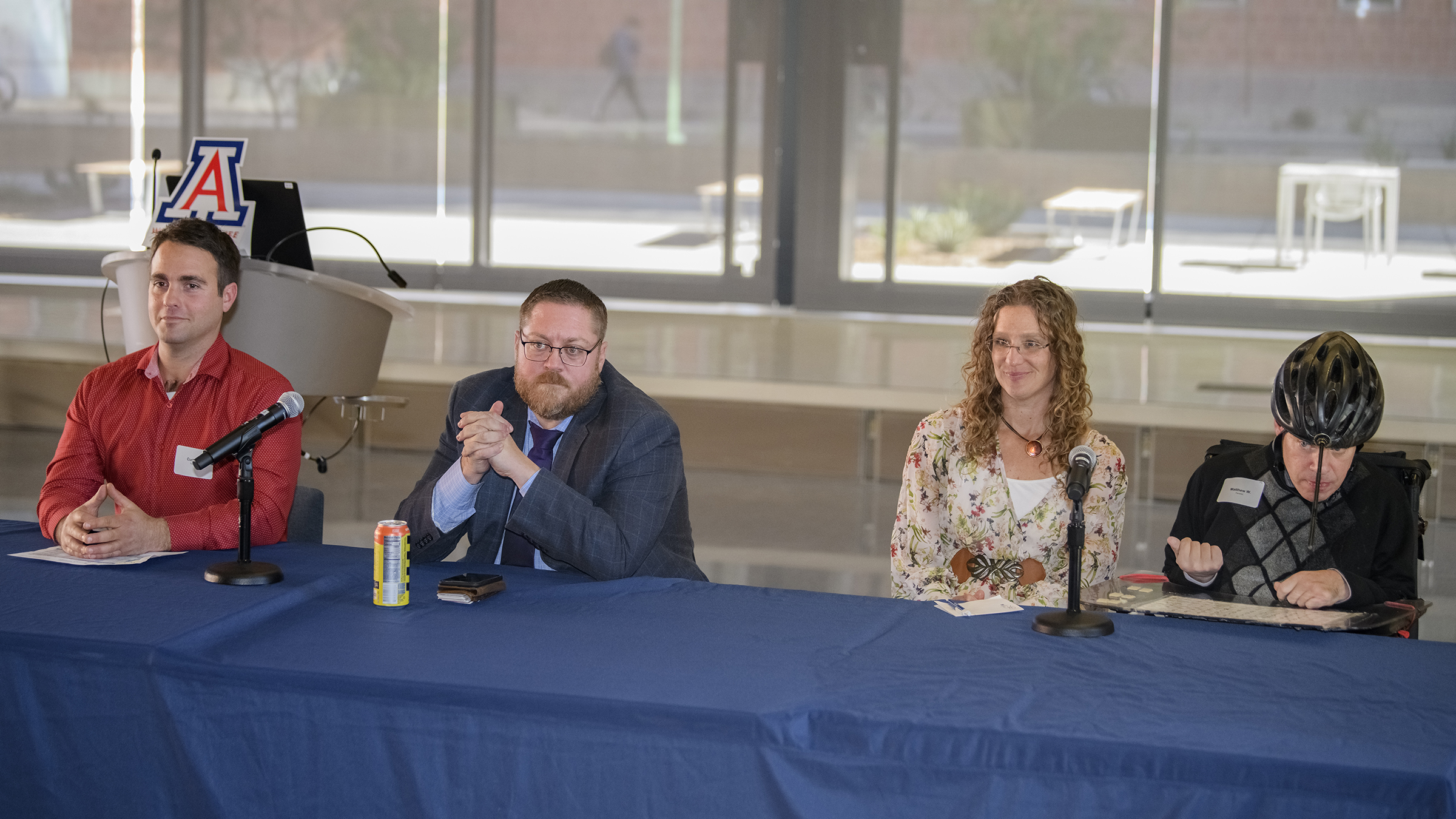 Countering a Lifetime of Assumptions About People with Disabilities

Vicki is a woman with Down syndrome and diabetes, and for the first time, she’s navigating the health care system without her mother and primary caretaker, who is recovering from surgery. A new physician asks Vicki’s caseworker all kinds of detailed questions about her medication history, but the caseworker, who barely knows Vicki, is flummoxed. Vicki’s sister also doesn’t have a clue. And, though she’s clutching a notebook that contains the answers to all their questions, no one bothers to ask Vicki about her meds.

The tale of Vicki is fictional, and her story is unfolding on video monitors in Tucson and Phoenix, being consumed by hundreds of University of Arizona Health Sciences students from all five colleges. Breaks in the video allow students to review what they have just seen, identifying missed opportunities and miscommunications. Medical students are asking if a medication list was ever forwarded to Vicki’s new care team. Nursing students are dismayed that no one on her team is including Vicki in the discussion of her own health. Pharmacy students are wondering why the physician is pushing an expensive device that may not be covered by Vicki’s insurance. 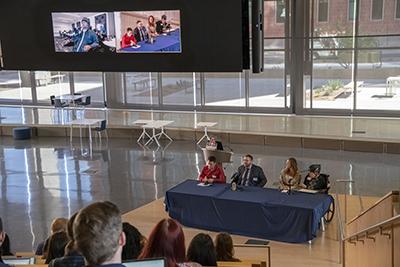 Health care providers aren’t lone wolves; they’re members of a tightly knit crew that must communicate across professions to ensure patient safety and improve the patient experience. To prepare them for this collaborative future, UArizona Health Sciences hosts interprofessional education (IPE) events, which bring together medicine, nursing, pharmacy and public health students for in-depth discussions of a case study. On Feb. 7, an IPE event focusing on issues affecting patients with disabilities was held in the Health Sciences Innovation Building.

Teams were assembled to ensure that each one contained a diverse collection of students. Geneva Matthew, a second-year student in the College of Pharmacy, says her table also included students from the colleges of Medicine and Nursing. “We all learn together and from one another with our different backgrounds and disciplines,” she says.

“I was able to give the patient perspective,” says Sue Lockaby-Eakin, MS, who participated in February’s event as a community facilitator for the first time. “I had a really good group, and the whole table had some insight into me and where I’m coming from.”

“When you put Health Sciences students all at a table discussing a case, they look at it with a broader perspective.”
Margie Arnett, MS, academic program officer with the Center for Transformative Interprofessional Healthcare

“Students can both enlarge their vision of what a person with a disability is, and also hear directly from patients,” says Tamsen “Tammie” Bassford, MD, chair of the IPE Disability Committee and associate professor of family and community medicine in the College of Medicine - Tucson. “Having that person at the table deepens the discussion because it’s less theoretical. There’s a real person sitting at your table, just like a patient would be part of the group if they were sitting at their own team meeting to discuss health care planning.”

Students appreciated these perspectives, which they don’t often get in the classroom.

“It’s good hearing from the people in the community who are having these issues, so we as future health care providers can better understand and serve our community,” Matthew says.

One theme that came up repeatedly was the tendency of some health care providers to ignore patients with disabilities and talk to their caretakers instead, driven by faulty assumptions about these patients’ mental capacities.

“I don’t know how many times I’ve checked into a medical facility and the person behind the front desk looks at my caregiver who’s pushing the wheelchair,” Lockaby-Eakin says. “It’s very demeaning when people address your caregiver as if you’re incompetent and incapable. There isn’t any reason why you can’t ask me. I have a master’s degree in rehabilitation — I should know the answers and maybe the solutions.”

Health care providers are members of a tightly knit crew that must communicate across professions. UArizona Health Sciences interprofessional education events bring together students from the colleges of Medicine, Nursing, Pharmacy and Public Health.

IPE events are organized around different themes and held four times a year by the UArizona Center for Transformative Interprofessional Healthcare.

“It is a wonderful event,” says Margie Arnett, MS, academic program officer with the Center for Transformative Interprofessional Healthcare. “When you put Health Sciences students all at a table discussing a case, they look at it with a broader perspective.”

Before breaking up into small groups to discuss Vicki’s case, 548 students gathered in the Forum, and remotely from other rooms in the Health Sciences Innovation Building as well as from UArizona College of Medicine – Phoenix, to hear from a panel of community members with disabilities. Panelists introduced themselves in a prerecorded video and then took questions from the audience. 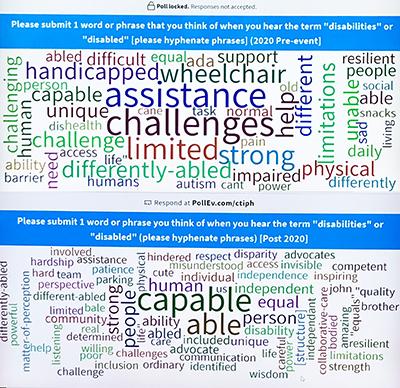 Students were interested in learning more about panelists’ experiences when seeking health care, and asked questions such as how to incorporate caregivers without minimizing the role of the patient and how best to support people with disabilities. Panelists agreed that health professionals must view patients as people first rather than as their disabilities, and value them as experts in their own bodies and experiences.

Lockaby-Eakin describes events like this one as “really, really needed. There’s a community out there that is never listened to. I found the whole thing really exciting.”

February’s event was one small step toward amplifying the voices of a diverse and vibrant community that is often overlooked, and planted seeds of awareness in the minds of tomorrow’s health professionals. A real-time shift in perspective was illustrated by an exercise students were asked to take part in at the beginning and end of the event.

Before the panel discussion, students were asked to use an app to describe what “disability” meant to them in one word or phrase. Before the audience’s eyes, a word cloud emerged, highlighting terms like “assistance,” “challenges” and “limited.” At the end of the event, after watching Vicki’s case and discussing it in their interprofessional groups, participants repeated the exercise. The stand-out word this time? “Capable.”