Dr. Garcia and the ‘Nosotros’ team at the College of Public Health have carved out a niche in Hispanic outreach in Tucson.
September 16, 2021 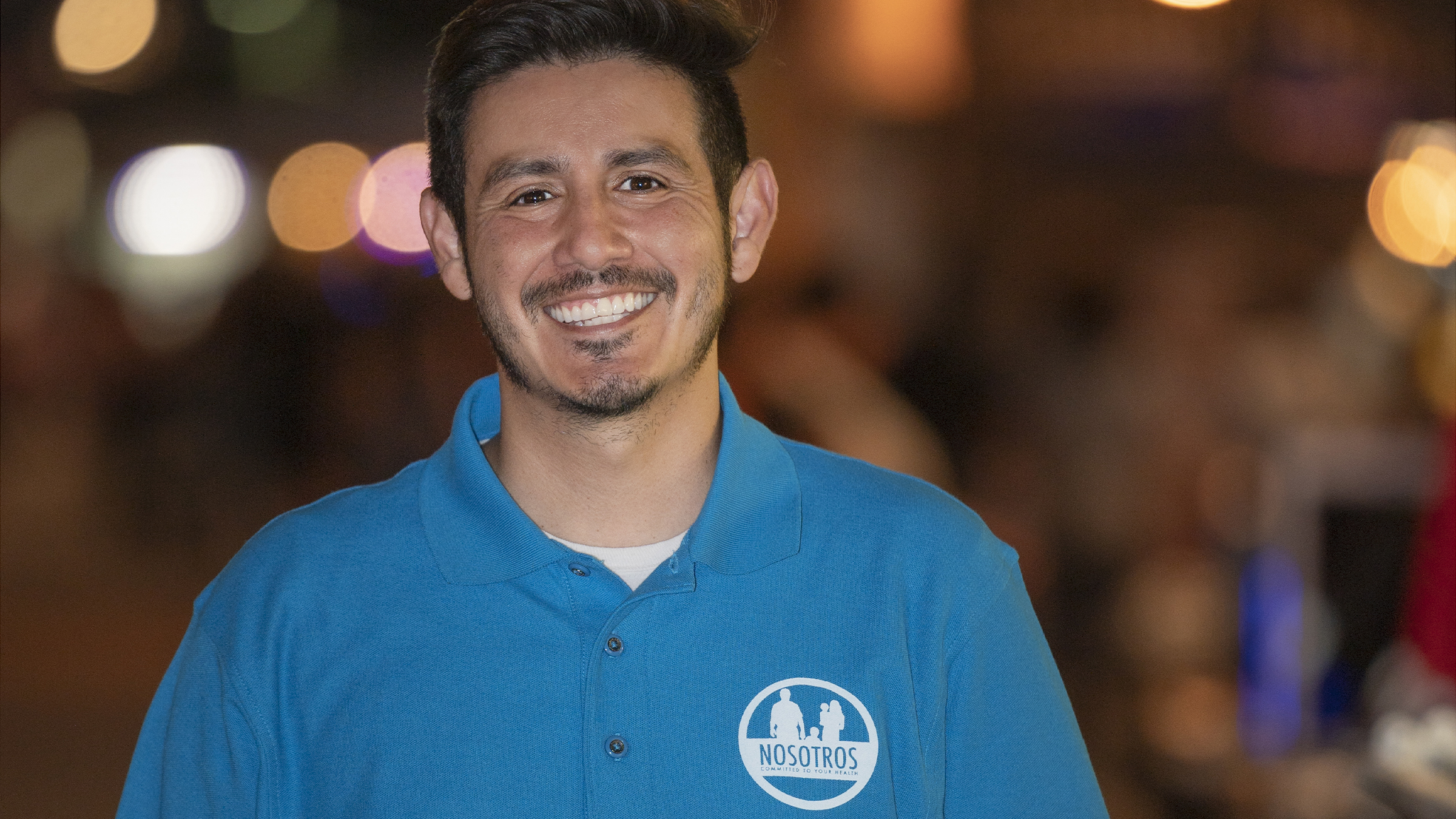 Dr. David Garcia at the Tanque Verde Swap Meet, where he and his team meet with community members in a more relaxed setting.

A sense of loss and a hope to help others avoid that feeling fueled David Garcia, PhD, to become a public health advocate.

“My Nana and Tata on both sides of my family had health issues,” said Dr. Garcia, a southern Arizona native and associate professor in the University of Arizona Mel and Enid Zuckerman College of Public Health’s Division of Health Promotion Sciences, using Spanish terms for Grandma and Grandpa. By age 12, both sets of grandparents had succumbed to cancer, diabetes and heart disease. Those losses may have been prevented with healthier lifestyle choices to avoid obesity and its comorbidities, he added.

His paternal grandmother was a breast cancer survivor who also was blind due to complications of Type 2 diabetes. She was the last to go. “She would make tortillas, tamales and whatever, but she couldn't see. She had to do it all by touch. And it was just amazing to me that she could function that way,” he said. She ultimately died of a heart attack, a result of complications due to her diabetes.

Those losses pushed Dr. Garcia in his research on exercise physiology, weight loss and non-alcoholic fatty liver disease (NAFLD). They also inspired him to take on additional roles as a mentor for the college’s Student Transformative Experiences to Progress for Under-Represented Professionals (STEP-UP) program and as assistant director for community outreach and engagement at the UArizona Cancer Center.

“As I started to understand that my losses were a result of diseases that were preventable, that just set me off,” he said. “I always knew I wanted to change lives, and I wanted to do it within the context of health. So at the forefront of everything I do is that idea. If I can help any other child to have their nanas and tatas and their parents, their family live longer, that's my job. That's why I do what I do.”

He’s also driven by the challenges in his own life. Born in Sierra Vista, Arizona, he grew up in South Tucson, and remembers going to preschool at Head Start and enjoying visits to the Tanque Verde Swap Meet – a popular southside flea market.

His family moved often and he attended several elementary and middle schools in Tucson, Sierra Vista and Huachuca City. When his parents divorced, he moved in with his best friend’s family. He and his friend attended Tombstone High School before enrolling at UArizona together. 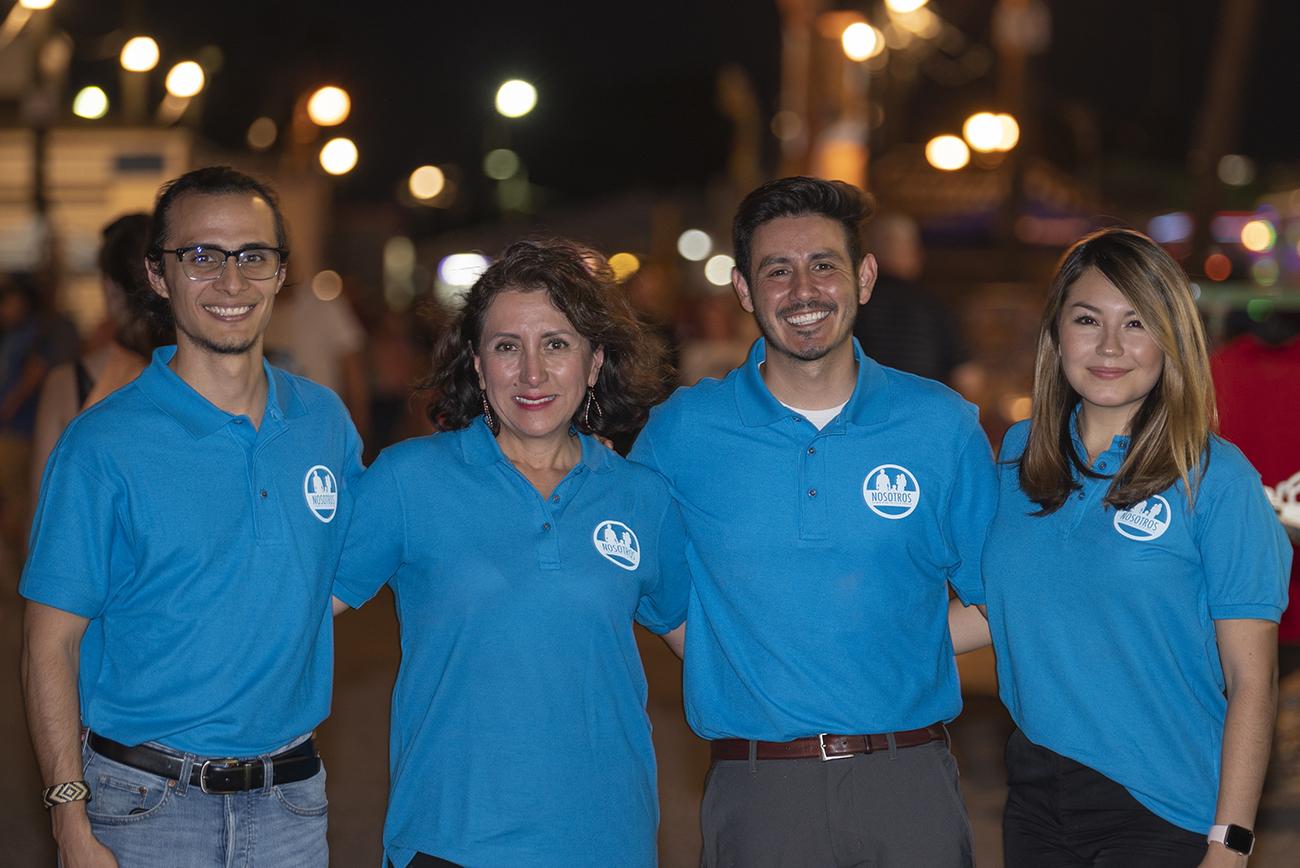 The first week of classes, his friend had an accident and was in a coma for months. On his own, distraught and unfamiliar with UArizona student support or diversity programs that might have aided him, Dr. Garcia transferred to Pima Community College. He said his life still wasn’t coming together, so he opted for a change of scenery. He moved in with his dad, who by then lived in rural western Pennsylvania, and enrolled at Slippery Rock University, where he earned a bachelor’s degree in exercise science.

A visiting lecture by John Jakicic, PhD, a national expert on the topic of obesity and chronic disease prevention at the University of Pittsburgh, inspired him to continue his studies there. At Pitt, he began his career developing short- and long-term intervention trials in physical activity, diet and weight management. After completing master’s and doctoral degrees, he reached out to another national expert on nutritional science and health care prevention, UArizona Cancer Center’s Cynthia Thomson, MD, RDN, who offered him a post-doctoral position studying population science, cancer prevention and related behavioral management interventions. That brought him back to Tucson.

“My life has always kind of been led by fate and opportunity,” Dr. Garcia said.

Meeting underserved communities where they are

With UArizona Health Sciences, industry and federal funding, and support of multiple mentors including David Marrero, PhD, and Francisco Moreno, MD, Dr. Garcia focused his research and outreach on the high incidence of obesity among Hispanic males, creating “the first successful weight loss intervention ever developed for Hispanic men” in the U.S.

More than 80% of Hispanic men are overweight or experience obesity, more than any other racial or ethnic group, according to the U.S. Department of Health and Human Services. Known as the Animo Study, the intervention resulted in participants dropping 14.5 pounds on average, with weekly in-person individual sessions over 12 weeks with a bilingual, bicultural lifestyle coach. 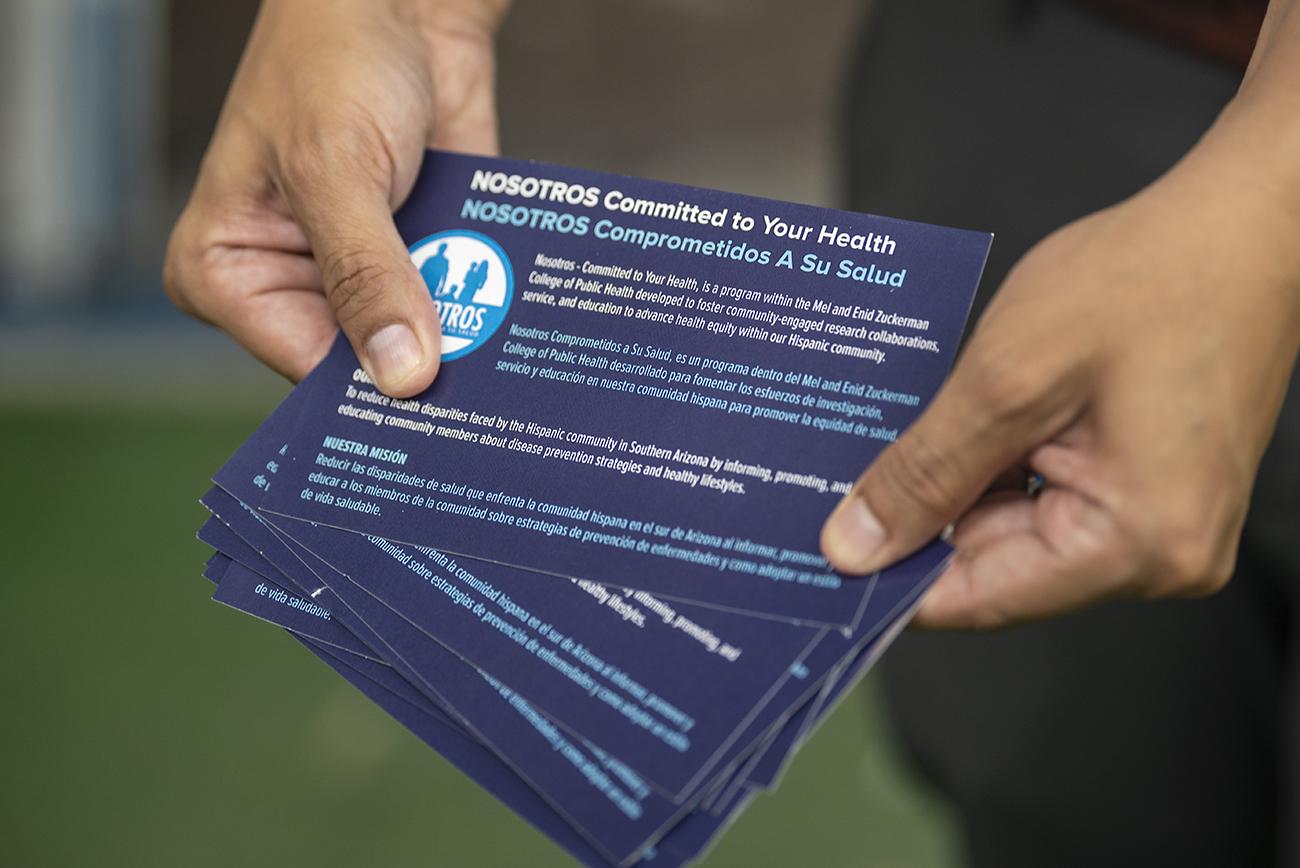 Dr. Garcia also is director of Nosotros Comprometidos a Su Salud, a network to increase awareness, engagement and successful interventions in health disparities research through community service that has helped underserved Tucson residents since 2013. The outreach efforts complete another circle for him in that they center on the Tanque Verde Swap Meet.

Why the swap meet? “Because it’s fun,” Dr. Garcia said. “The swap meet is one of the heart-and-soul things about Tucson. It's our community. It's a very familial environment. It's also an environment conducive to gaining weight. There’s food and shopping. It's our culture.”

Through Nosotros, which is part of the UArizona Collaboratory for Metabolic Disease Prevention and Treatment, Dr. Garcia and team have engaged more than 10,000 individuals and have enlisted over 1,000 participants of Mexican descent in research studies. In addition, the team has trained more than 100 students in lifestyle, community engagement and health prevention research. The team even hosted a clinic at the swap meet that dispensed about 400 doses of Johnson & Johnson’s Janssen COVID-19 vaccine. 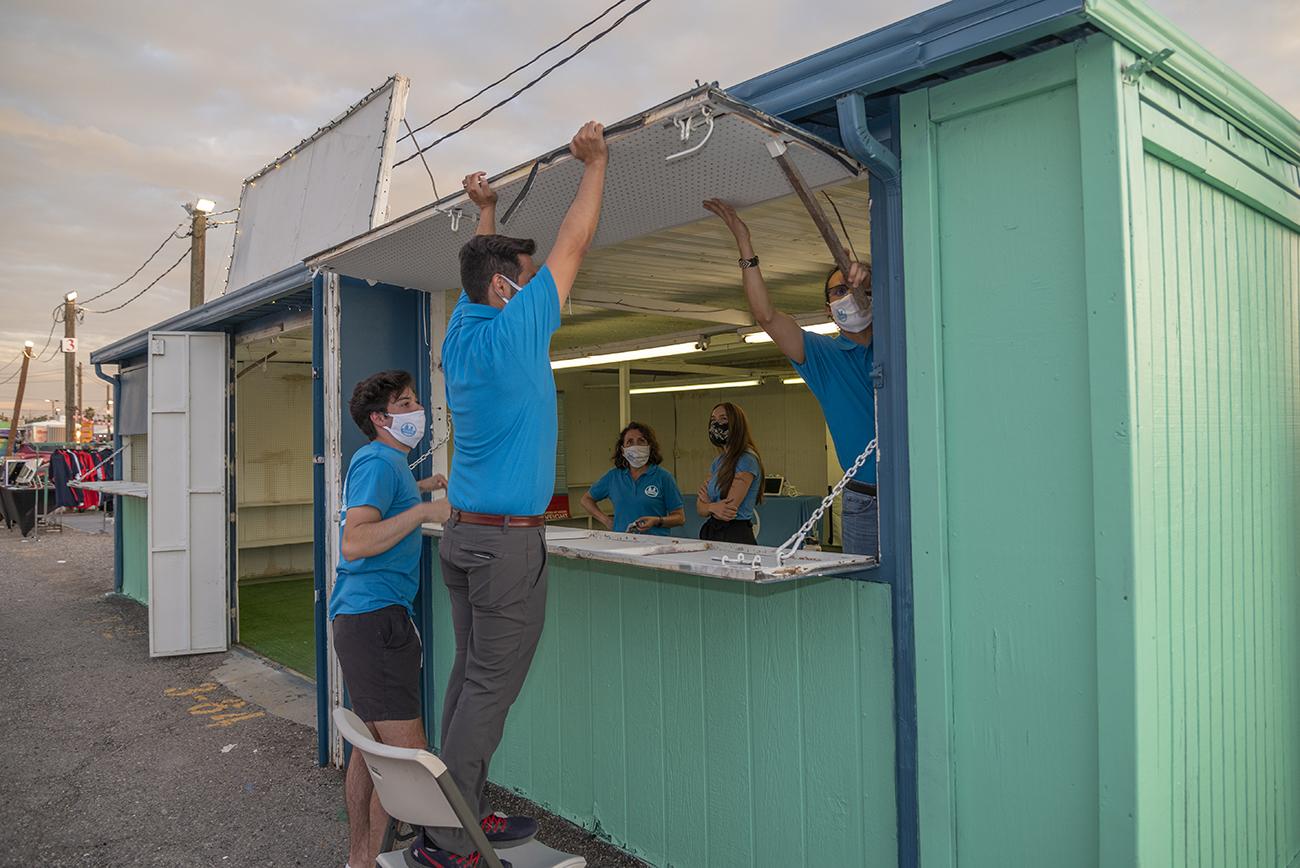 The team is gearing up for another outreach effort at the swap meet to target liver disease. Hispanics have a higher risk for liver disease due to their likelihood of carrying a genetic variant known as PNPLA3. The effort is part of an earlier Liver Ultrasound & Nutrigenetic Assessment study, begun in 2019 and known as LUNA. The study found about half of nearly 307 participants screened had NAFLD. Now, they’ll deploy a FibroScan ultrasound scanning device at the swap meet to screen directly for NAFLD. The simple, non-invasive $300 procedure is offered for free and takes about 15 minutes.

While adults are scanned, Nosotros senior program coordinator Rosi Vogel said volunteers entertain their kids with activities like coloring books and a spinning wheel to win prizes. The aim is to reduce barriers and make it “very welcoming and accessible and easy for people,” she said.

If FibroScan results show a need for further tests, participants are referred to a clinical partner for appropriate follow-up. The idea isn’t to scare people, Vogel and Dr. Garcia said, but to let them know they have a choice to make lifestyle changes that may stop and even reverse NAFLD disease progression. 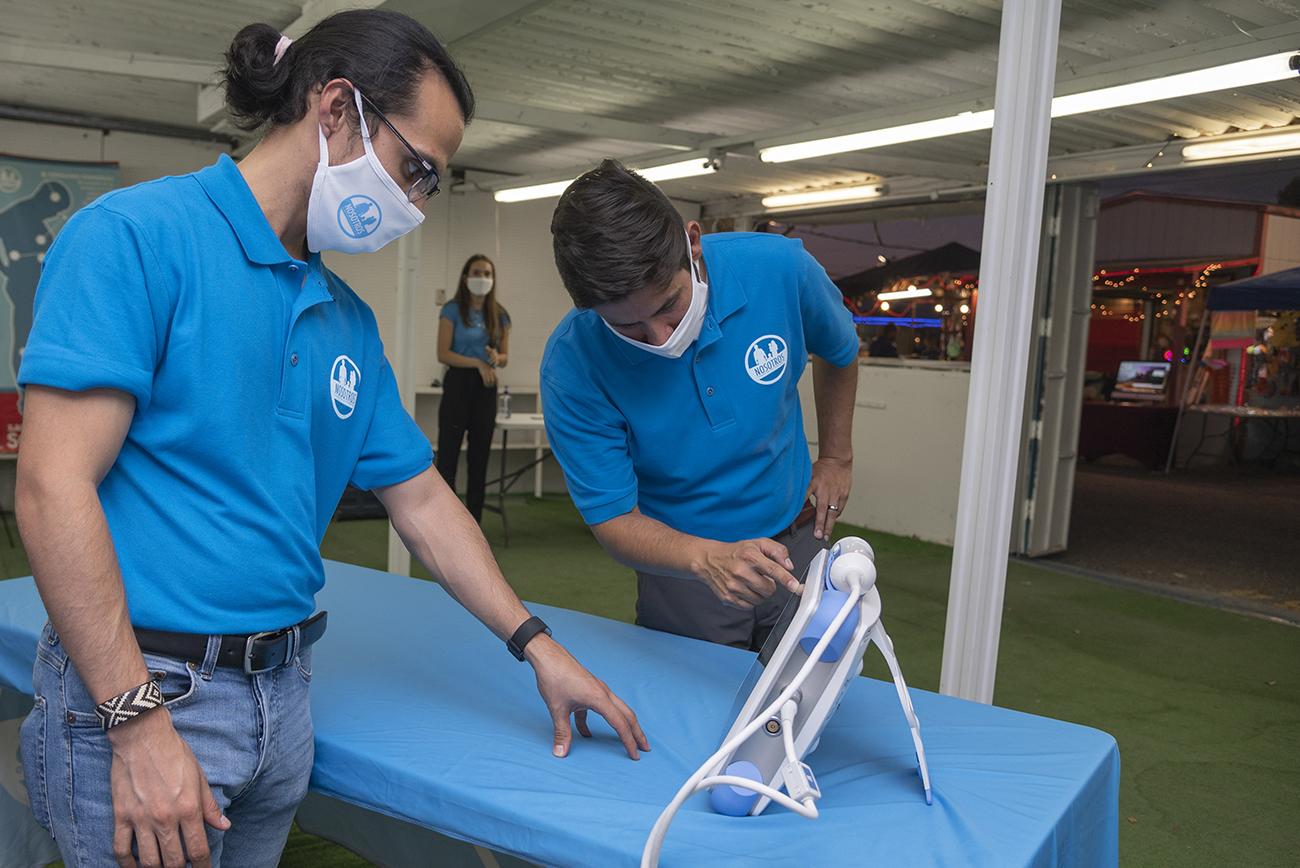 Vogel, who earlier worked for the Diabetes Prevention and Education Center at Banner – University Medical Center South, said she’s found her niche at Nosotros and with Dr. Garcia.

“It's great working with him because of the open communication, the trust, the respect that we have,” she said. “He's a mentor to me, too. And it's fun to be quite honest.”

Dr. Garcia and the team also will launch the Southern Arizona Liver Cohort in October, a registry for longitudinal research that is specific to Mexican-origin adults and can evaluate long-term, multi-generational health interventions.

“We're going all in to try to eradicate this disease state, or at least bring awareness so a lot of people know they have a choice before it progresses,” Dr. Garcia said.