Working in a combat hospital in the Middle East and trauma centers in rural America prepared Kristie Hoch to train future CRNAs to provide anesthesia care for patients.
April 4, 2022 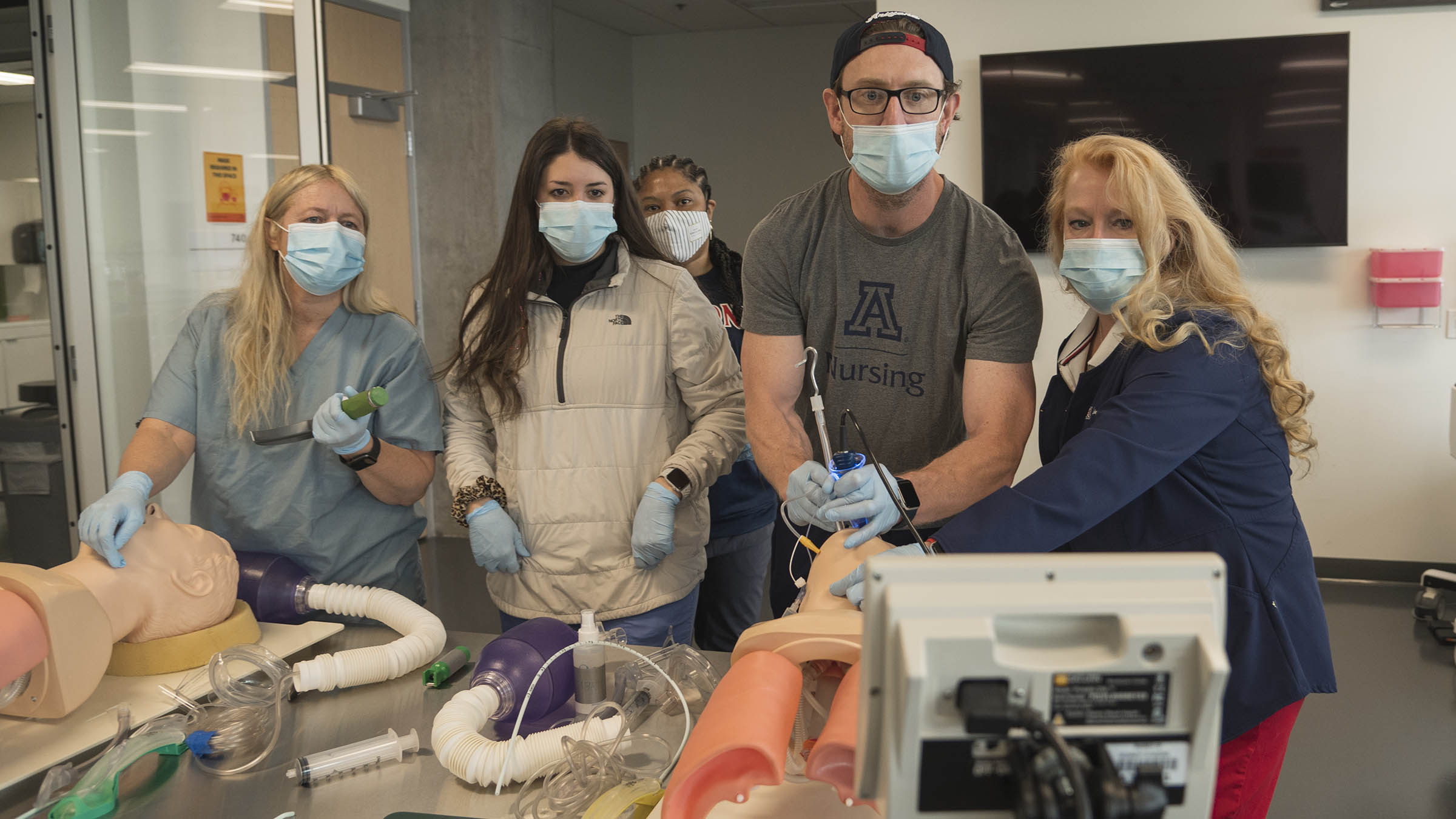 When Kristie Hoch, DNP, CRNA, MS, RRT, was deployed with her Army Reserve unit during Operation Desert Storm in the early 1990s, she was a respiratory therapist. After months of working closely with Certified Registered Nurse Anesthetists (CRNAs) on wounded soldiers, she had a new career plan, one that would have her entering a nursing specialization that began during the Civil War. 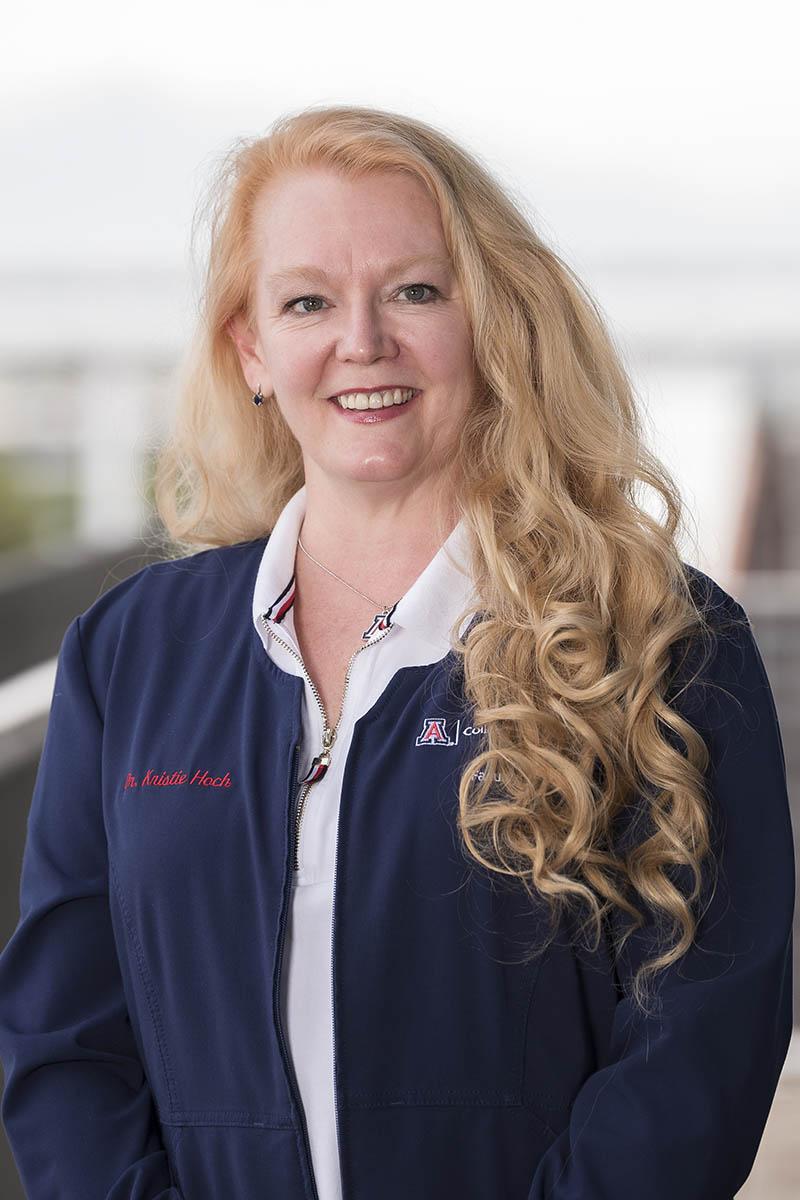 “When Desert Storm soldiers would come in, the team would have to do triage, wound management and a rapid assessment of their needs,” said Dr. Hoch, who is program administrator for the nurse anesthesia program at the University of Arizona College of Nursing. “It was amazing to see the CRNAs scope of practice while taking charge of a situation – their critical thinking and how they could do it with such skill and compassion. It made me say, ‘Oh, yeah, this will be the job for me. This is what I want to do next.’”

Dr. Hoch was following in the footsteps of Civil War nurses who gave anesthesia to wounded soldiers for the first time. It was followed by the development of the first nurse-led educational anesthetics program, founded in 1909 in Portland, Oregon. It wasn’t until 18 years later, in 1927, that the first medical academic anesthesia program for physicians was created.

The long road to a CRNA

After returning from her deployment, Dr. Hoch earned her nursing degree while continuing to work as a respiratory therapist. She then had to work in an intensive care environment before she could enroll in an anesthesia program. After 12 years in the Army Reserve and 10 years as a respiratory therapist, Dr. Hoch earned a master’s degree in nurse anesthesia in December 2004, followed by her CRNA certification in early 2005. In 2016 she earned her Doctor of Nursing Practice degree (DNP). 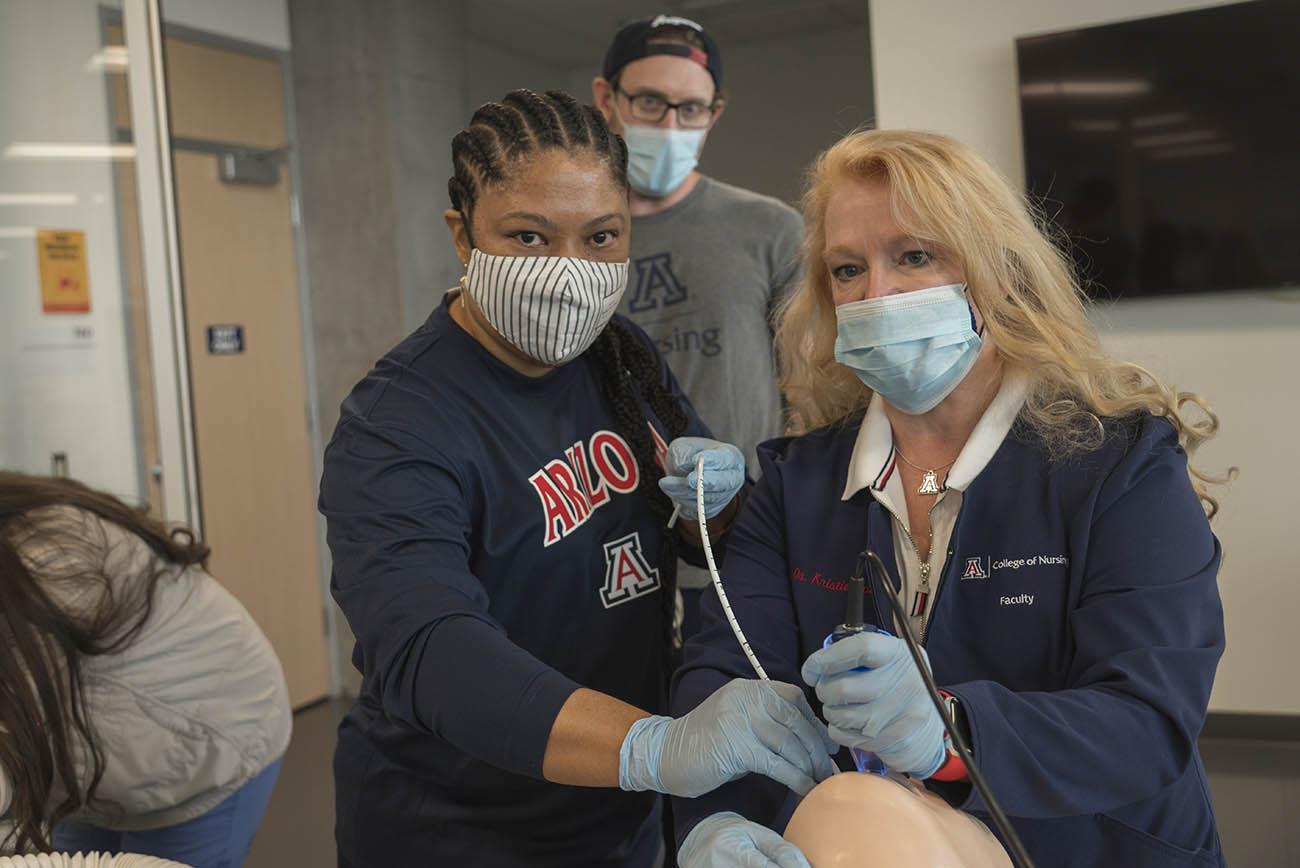 Prior to coming to the UArizona College of Nursing in 2017, Dr. Hoch was the rural facilities director for a company that supplied CRNAs throughout Maine. In this role she oversaw the CRNA leaders at critical access, office-based facilities, and reviewed operating procedures and quality assurance at the 17 locations the company served. In addition, she continued to practice in a variety of settings. According to the American Association of Nurse Anesthesiology (AANA), CRNAs provide more than 80% of the anesthesia in rural counties, which often rely on independently practicing CRNAs.

It was while working in Maine that Dr. Hoch was contacted by the former CRNA program director at the College of Nursing, who asked if she would be interested in coming to Tucson as the assistant director. She initially said she wasn’t interested, but then told her husband about the surprise call she had received.

“He told me I should consider it,” said Dr. Hoch. “He said, ‘You are the happiest and most excited when you are talking with students and sharing your passion for the profession. What better way to ensure the future of your profession than to help prepare and train future CRNAs?’”

With that, Dr. Hoch began the next phase of her career – taking her years of clinical experience and translating it into educational opportunities for future generations of CRNAs.

“I love being a CRNA. It is new every day. Every patient is different, and that provides learning opportunities and challenges that make it extremely rewarding.”Kristie Hoch, DNP, CRNA, MS, RRT

“So many of the case scenarios we run during critical intensive simulations are based on patients I have taken care of over the years,” explained Dr. Hoch. “Every patient’s case is different, with different lab values or a unique pathophysiology – these add real-life experiences to the case studies the students are working on.”

Dr. Hoch’s students and colleagues appreciate the experience and passion she brings to the program.

“Dr. Hoch’s unique background affords her endless knowledge that she shares enthusiastically with her students,” said former student Rylee Apodaca, DNP, CRNA. “Whether it’s stories of the trauma calls she’s responded to, airway emergencies she’s managed, or the anesthetic cases that simply did not go as planned, her transparency and passion are radiant. Her ability to teach concepts from a factual standpoint while integrating real-world knowledge helped me transition from the books into residency, and now into my practice.”

Terry Badger, PhD, RN, PMHCNS-BC, FAPOS, FAAN, chair of Community and Systems Health Science in the College of Nursing and administrative program lead for the DNP program, has worked with Dr. Hoch for the past five years. “The thing that is so amazing about Kristie is that she not only brings an incredible depth and breadth of expertise to the job, but she also brings such compassion and creates an incredible learning environment,” said Dr. Badger. “She is amazing!”

The full-time, three-year intensive UArizona College of Nursing CRNA program is a DNP program with a nurse anesthesia specialty, after which graduates are eligible for CRNA certification. Dr. Hoch explained that to apply for the highly competitive program, students must have a minimum of a year experience as an intensive care nurse. The average experience for students accepted into the College of Nursing program is three-and-a-half years in a high acuity or cardiac intensive care unit. Last year there were 313 applicants for only 18 openings. 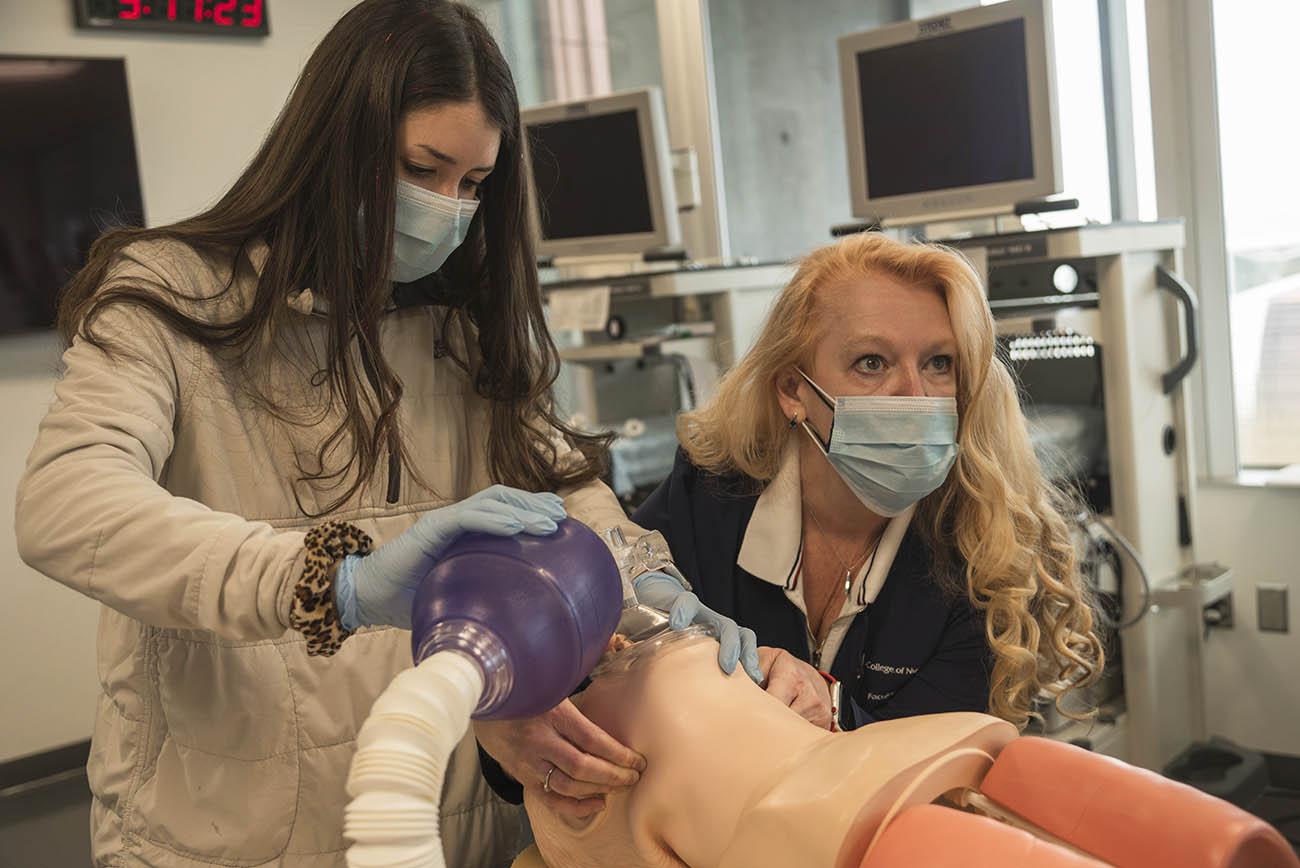 “If it is your passion to be a CRNA, don't give up,” Dr. Hoch said. “There are a lot of people who apply and don't get in the first time, and so they give up. It sometimes takes two or three times of applying before you get in because it's extremely competitive.”

“Kristie was one of my first instructors who pushed me to act independently,” said Luc Corriveau, DNP, APRN, CRNA. “She knew I was ready for this before I did. I remember her sitting with me in the operating room telling me she was there if I needed her, but she let me know I would not need her. She always seemed to know where I was in my educational journey, and she focused on supporting or pushing me based on what I needed.”

Dr. Hoch said the pandemic has had minimal impact on the students’ progress because the first 18 months of the program are set up as a hybrid with didactic training online. However, the program did face a challenge placing students into clinical rotations, as medical facilities were limited to essential personnel only.

Dr. Hoch said that with the support of Ki Moore, PhD, RN, FAAN, dean of the College of Nursing, and Michael D. Dake, MD, senior vice president for UArizona Health Sciences, she was able to establish with medical facilities that the CRNA students were “residents” because they were licensed professionals prior to their graduate training, enabling them to continue their clinical training.

Dr. Hoch said she loves leading the CRNA program because of the experience that her students already have. She said she tells them, “Trust your intensive care experience and expertise from the beginning because that experience has developed your critical thinking skills prior to us ever introducing this added information to you. Always utilize evidence-based practice. Always do what is best for your patient.”

“I love being a CRNA. It is new every day. Every patient is different, and that provides learning opportunities and challenges that make it extremely rewarding,” said Dr. Hoch.

A contagious passion and dedication to the job

Whether talking with colleagues or former students, Dr. Hoch’s dedication and drive to create the best CRNA program possible comes across consistently. 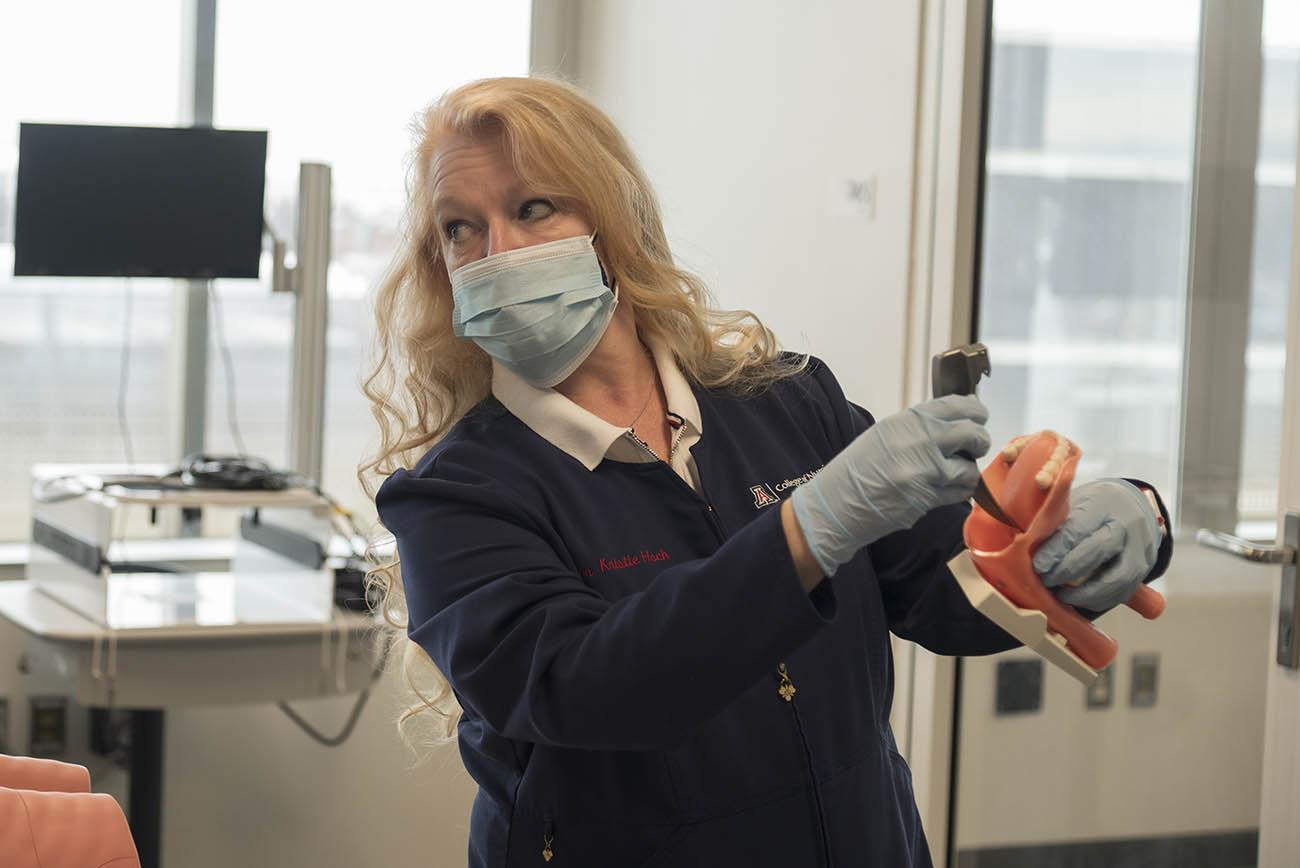 “I spent three years trying to figure out how Dr. Hoch manages to do everything that she does,” said former student Dr. Apodaca. “Her passion is contagious. She is unwavering in her efforts and is a poised professional, intentional in her practice.”

Dr. Corriveau agrees. “Kristie does a fantastic job of leading and teaching by example. Her passion for the profession, mentorship and leadership helped me to become the CRNA I am today,” he said.

It is evident that the experience Dr. Hoch gained working alongside CRNAs during her Desert Storm deployment over 30 years ago lit a spark inside her that she now is passing along to highly trained cohorts of specialized nurses.

“Under her leadership the CRNA learning environment has become infused with a positive attitude,” said Dr. Badger. “That kind of caring, compassionate attitude can’t help but encourage our students. No matter how hard the work is, she lets them know they can do it. Our students are lucky to have her.”

“Being an educator and seeing my students gain that knowledge base, that excitement and that passion for the profession, it’s the reason I do it,” said Dr. Hoch.