After two years of pandemic-related virtual or small in-person ceremonies, 2022 ceremonies were back in a big way.
May 12, 2022 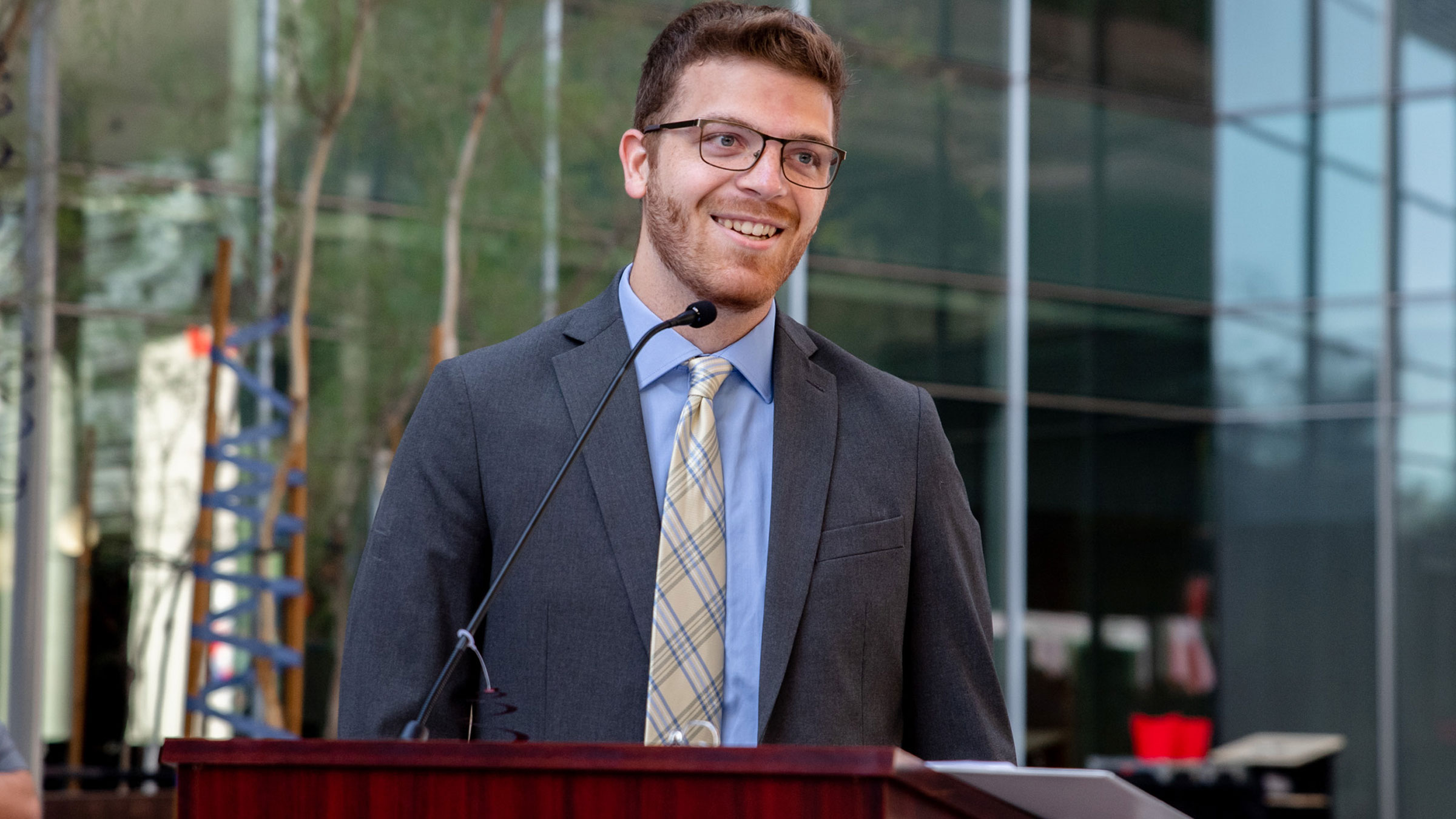 Luke Wohlford, MD, was selected as the 2022 College of Medicine – Phoenix commencement speaker.

University of Arizona Health Sciences graduates got a taste of back to the future in 2022 when commencement and convocation ceremonies returned to full, in-person celebrations after two years of virtual or smaller in-person events.

While Health Sciences graduated hundreds of outstanding students, to honor and celebrate students’ perseverance throughout the pandemic, the following students exemplify the grit and determination of the entire graduating class.

Growing up as the son of an Air Force officer, Luke Wohlford, MD, lived all over the United States — and in Germany — before his family settled in Arizona for the last decade. He attended high school and college in Tucson, earning his bachelor’s degree in physiology at the University of Arizona.

Originally, he wanted to make a career out of his love for math and planned to major in engineering; but once he was exposed to public health and physiology in college, he pivoted to a career in medicine. His exposure to emergency medicine while working in both collegiate and rural EMS agencies led him to realize the specialty was the right fit for him.

“I took the Pima Community College EMT course during a summer break in college, and I was surprised at how much I loved the material. I really started to doubt my original plan to study engineering from the medical lectures alone, but my clinical shifts in the emergency department sealed the deal for me. Seeing how amazing the role of the EM physician was and how many people they can help in a single shift was inspiring. It set me on my current path,” he said.

Dr. Wohlford’s journey through medical school was backed by a huge group of supporters that included his parents, his fiancée and his classmates, whom he was able to call and meet up with whenever he needed help. Wohlford was selected as the 2022 commencement speaker. Wohlford will be heading to Burlington, Vermont, to train at the University of Vermont Emergency Medicine Residency.

Shienna Braga moved to Arizona with her family as a 15-year-old from the Philippines. Her mother is a pharmacy technician and her father is a spinal cord injury survivor. Because of her father’s injury, she researched a lot of the medications he was on and would ask her father’s doctors about the medication. She was motivated by the realization of the impact a pharmacist could have on health care outcomes. 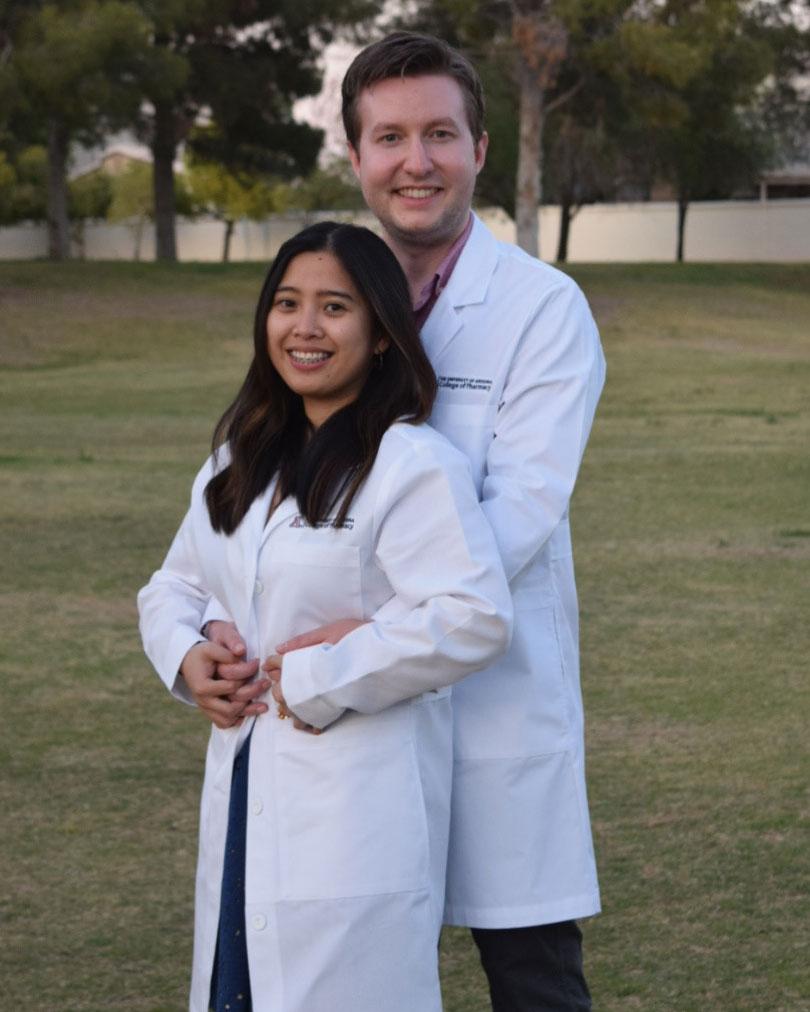 After graduation, Braga will be completing her residency at the Mayo Clinic in Rochester, Minn. “Mayo was on top of my list, and I’ve always dreamed of working for the Mayo Clinic,” Braga said. “So it's great to be able to match with them and for them to consider me. It's such an honor. I'm very, very happy with the results.”

Braga met her future husband four years ago while waiting for the bus to take Phoenix pharmacy students to Tucson for orientation. Eric Taylor, her fiancé, will be completing his residency at St. Joseph’s Hospital and Medical Center in Phoenix.

“We were hoping to match together in the same state, but we’ve been talking about the possibility of matching apart for a while, and we know that it will absolutely be okay. A year will go by fast, and I’m so excited that we got our dream residencies,” he said.

“It felt surreal,” he said of learning where he’d spend the next few years of his training. “As a first-year medical student with impostor syndrome, I never thought that was a program I could be at. It took a lot of mentors, friends and family telling me I should go after my dreams.” 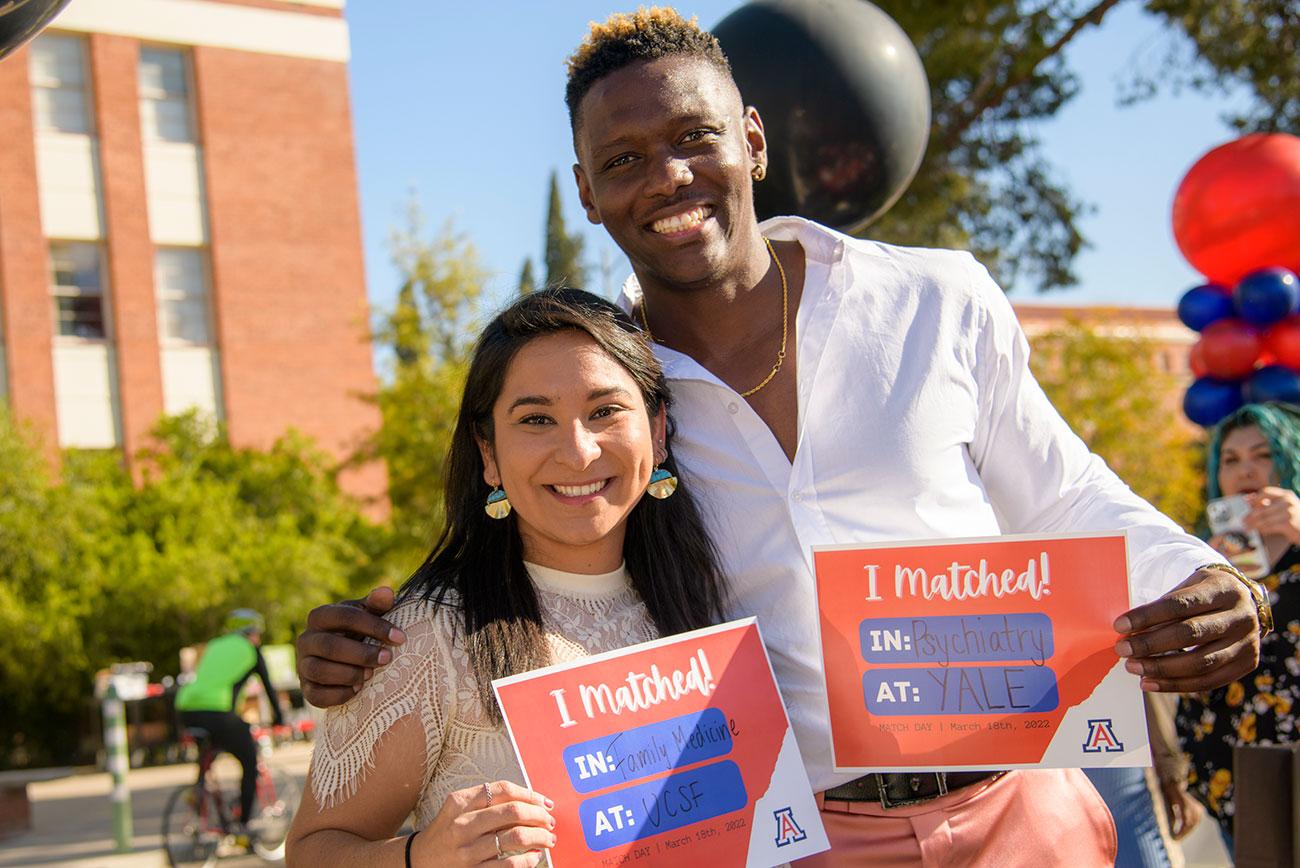 He said Yale’s program appealed to him for its commitment to Black trainees.

“They graduate the most Black psychiatry residents outside of an HBCU,” he said. “I needed to be somewhere where I could see myself reflected, where I felt supported by people who understand what I’m going through as we navigate this difficult journey of residency. It’s going to make a difference and let me really thrive.”

He said he’s been passionate about mental health for years and knew from “day one” that he wanted to practice psychiatry.

“Mental health is not talked about enough, especially in my community. People really need to know that it’s OK not to be OK,” he said. “I’m hoping I can be a voice to show we don’t have to have the stigma that we have associated with mental health.”

For the first time in his life, he’ll be living outside of Arizona.

“I am nervous about moving to the cold, but I’m excited to do something new, to grow,” he said. “It’s going to be a great opportunity to learn.”

Because he is a recipient of the Primary Care Physician Scholarship, he’ll be returning to Arizona when his training in Connecticut is complete and hopes to open a clinic in Phoenix to work with patients from marginalized backgrounds. 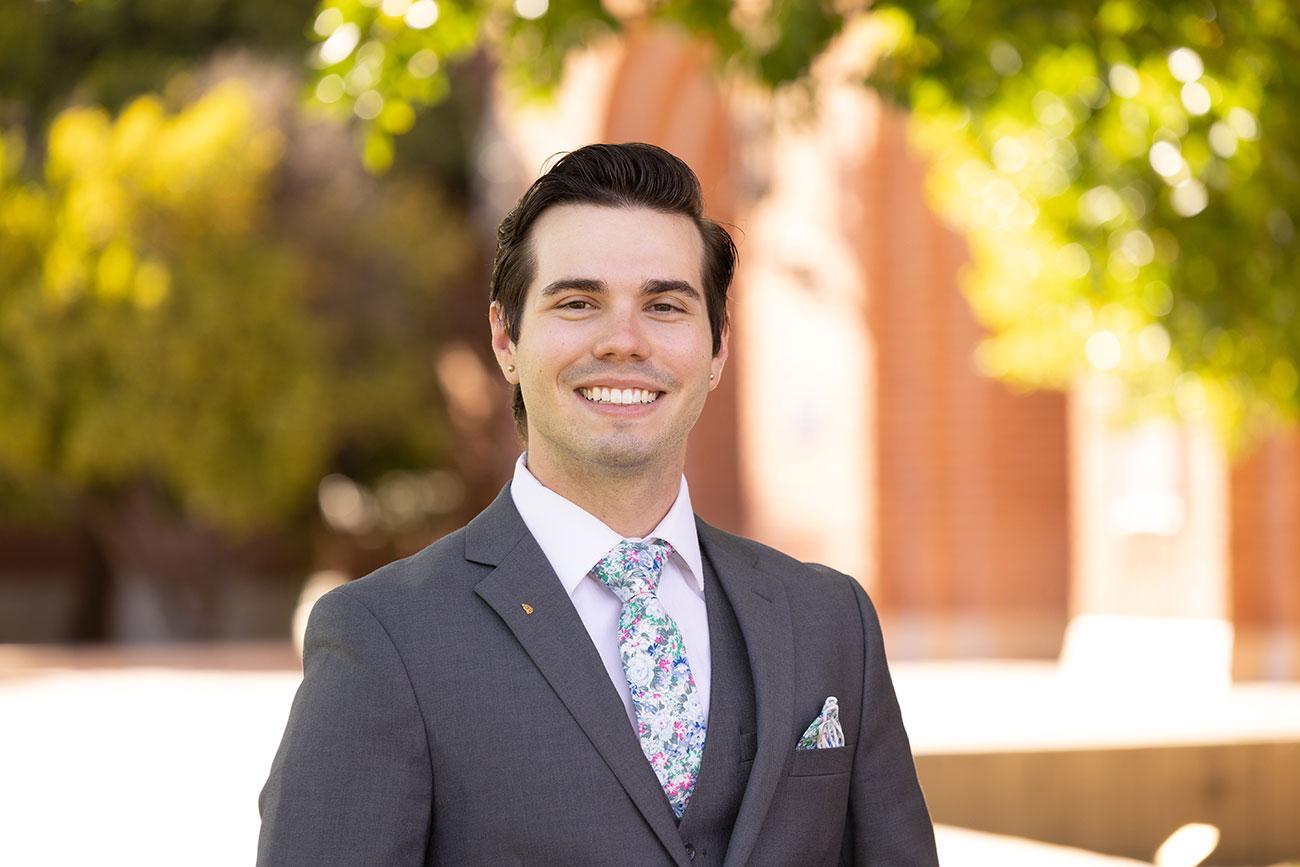 Tankersley participated in many community-driven volunteering events and attended many health-oriented lectures. Through AED outreach, he volunteered at Z Mansion, working with those experiencing homelessness, and SARSEF (Southern Arizona Research, Science and Engineering Foundation), an organization that engages young students interested in STEM who are underrepresented in these fields. AED has provided him with a lot of friends and role models in health care.

Tankersley's strong interest in immunology started after an internship at a vaccine company. Additionally, his grandfather's diagnosis of early-onset Alzheimer's disease, and subsequent decision to volunteer in Alzheimer's vaccine studies, inspired him to continue that legacy by working to help find a cure.

Beginning in the summer of 2020, Tankersley began conducting research in the lab of Hsin-Jung Joyce Wu, PhD, associate research scientist in the Department of Immunobiology, College of Medicine – Tucson, studying the impact of the gut microbiota on the immune system. After a year of working in the Wu lab, Tankersley decided to do his senior thesis looking at the impact of the gut microbiota on T cell exhaustion.

Following the departure of his principal investigator, Trevor joined the lab of Janko Nikolich-Žugich, MD, PhD, department head and professor, Immunobiology; Director, Aegis Consortium for Pandemic-Free Future; Co-Director, Arizona Center on Aging, College of Medicine – Tucson, to continue conducting research, and he declared a second thesis focused on SARS-CoV-2 and modeling the disease in mice.

Tankersley has been awarded the Nugent Award, Wildcat Excellence Award and the Dean's Distinction Award.

After graduation, Tankersley will work as a research technician in the Nikolich-Žugich lab, further honing his skills as a researcher. He then hopes to apply to graduate school, eventually obtaining a doctorate in immunobiology.

First-generation college student Alexandria Scheid – who graduated with honors at May Convocation -- grew up in Sonoita, a rural town known for its ranching and retirement communities. In high school, she dreamed of attending college, but initially she was unsure of what to study. That all changed when she did her senior exit project, which required her to shadow different careers to sharpen her post-high school goals. 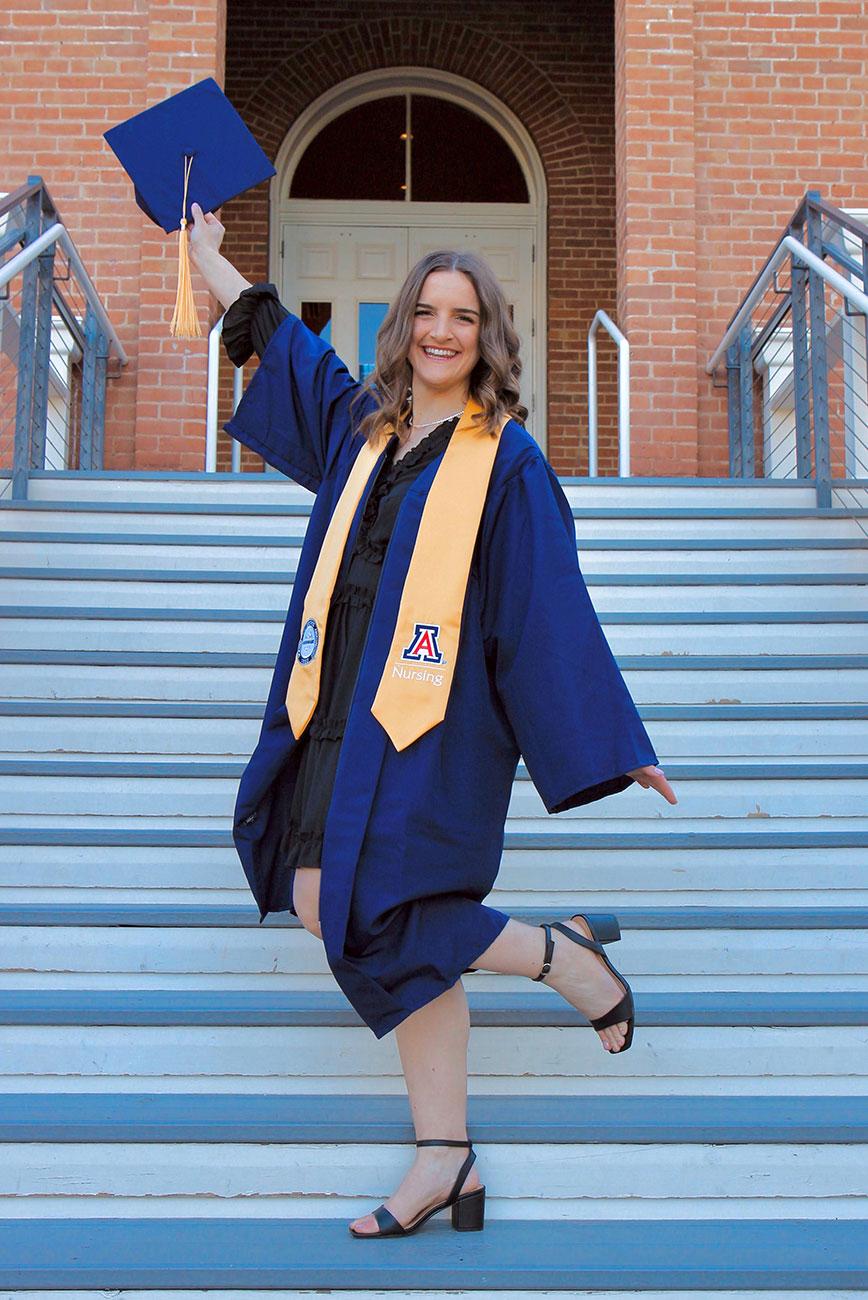 “I was exposed to a wide range of different career paths,” Scheid said, noting that she was curious about environmental science. But when she shadowed a nurse who was also a nurse administrator at a Veterans Administration hospital, Scheid found her true calling. “I loved how everyone there knew her and relied on her, not only within her unit but also with her patients,” she said. “She had established great therapeutic relationships with her patients. I thought ‘This is the job for me.’ That’s why I applied to the University of Arizona College of Nursing Bachelor of Science in Nursing (BSN) program straight out of high school.”

Scheid’s status as a rural first-generation college student earned her an Arizona Nursing Inclusive Excellence (ANIE) Scholarship, which provides eligible students with individualized mentoring, professional skills development, and preparation for RN to APRN certification and job placement. “The individuals who are curating the ANIE scholarships are the best,” Scheid said. “You feel so supported and you know they want to give you every opportunity possible.”

Scheid said she will be staying in Tucson. Her plan is to work at Banner and begin seeking opportunities in women’s and children’s care. She would also like to continue working as a nurse researcher and will apply for the Evidence Research Fellowship at Banner. 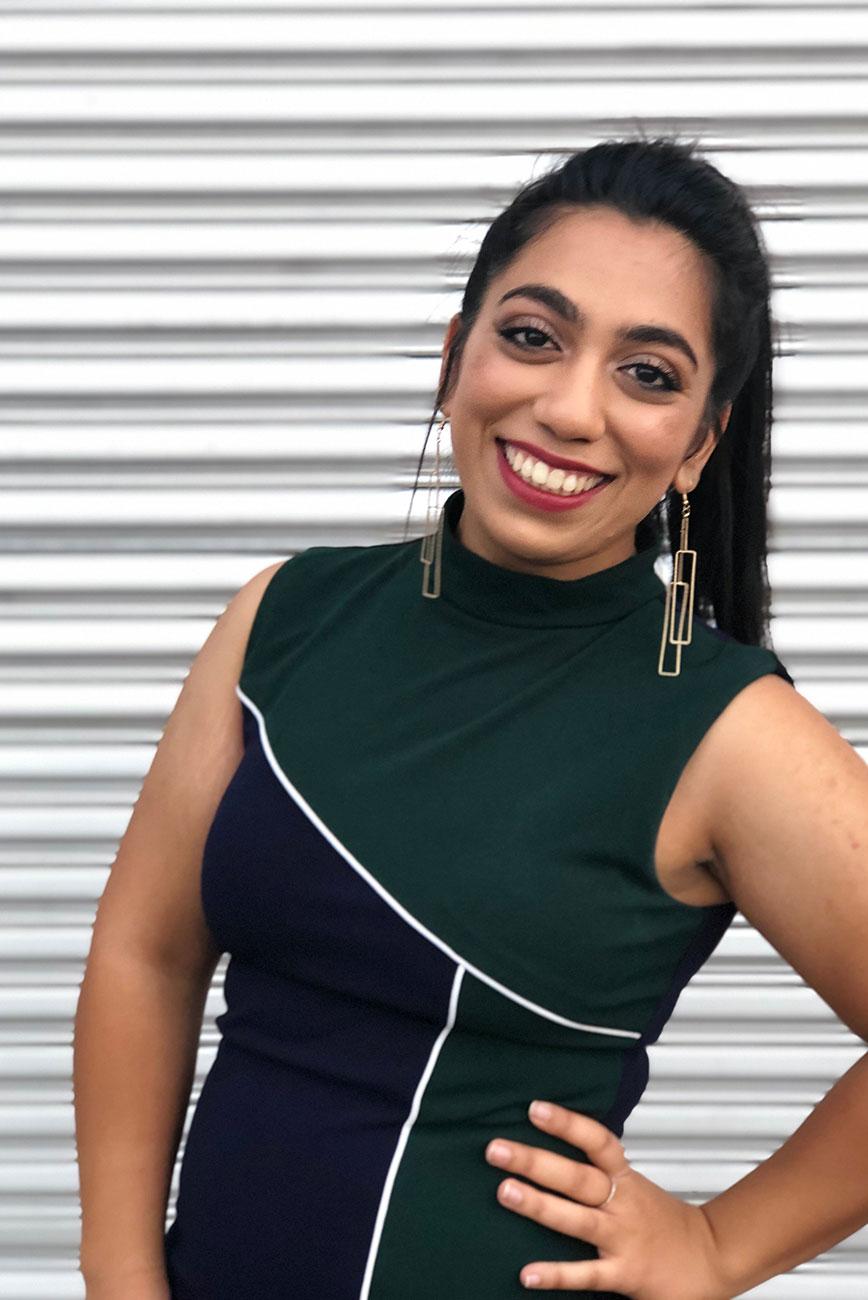 A first-generation college student, Simran Sahnan will receive her master’s in public health (MPH) degree with a concentration in health services administration. Throughout her degree program, she worked as an intern at Banner University Medical Center in Tucson; a research technician at the UAHS Biorepository; and volunteered as a Graduate Ambassador for the college. While earning her MPH, Sahnan worked closely with Amanda Sokan, PhD, MHA, LLB, assistant professor and co-program director, Phoenix programs, Division of Public Health Practice and Translational Research.

“Despite the rigors of COVID-19 during her educational journey, Simran stayed engaged and productive,“ said Dr. Sokan. “She juggled her many responsibilities with a strong work ethic, a keen sense of what is essential, and a joie de vivre that endeared her to everyone with whom she came into contact. Simran has been an accomplished student and will no doubt go on to be a consummate healthcare professional. She is truly exceptional.”

Simran received her bachelor of science in health sciences in physiology from the University of Arizona in 2020. She will begin an administrative fellowship at Healthcare Outcomes Performance Company in Summer 2022 following graduation.