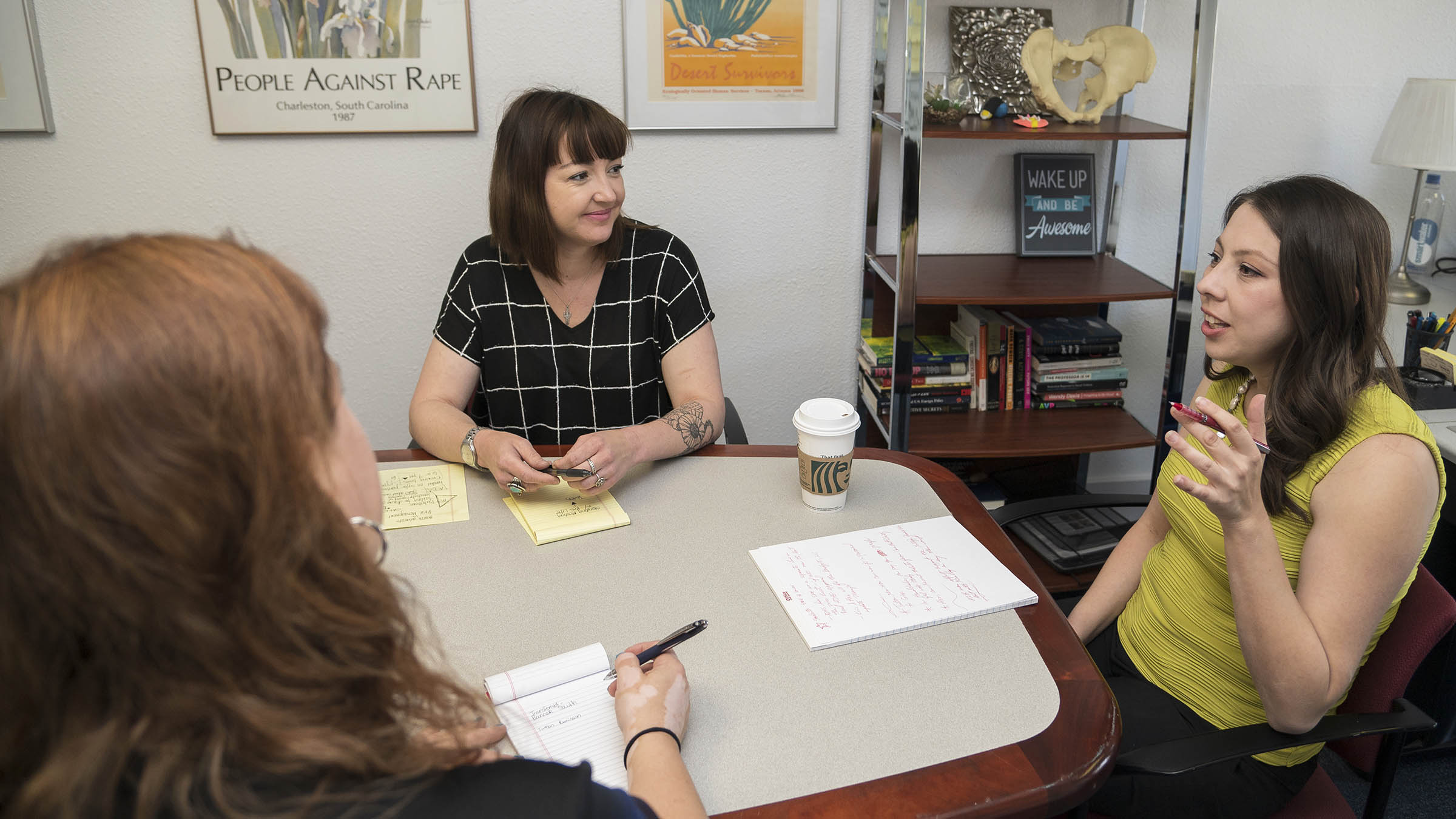 Elise Lopez, DrPH, MPH, (right), assistant professor in the College of Public Health, and her team strategize on the fall rollout of several new programs being piloted this spring to strengthen efforts to reduce gender-based and sexual violence on campus.

Elise Lopez, DrPH, MPH, faced a conundrum when her son said he wanted to join the Cub Scouts when he was 5.

As a University of Arizona Health Sciences expert on gender-based violence and sexual assault prevention, Dr. Lopez had reservations because of historic child sexual abuse issues and policies on sexual orientation and gender associated with scouting. But by the time she decided to enroll her son, Boy Scouts of America – now known as Scouts BSA – had addressed the issues and changed its policies to allow LGBTQ as well as female scouts and leaders. 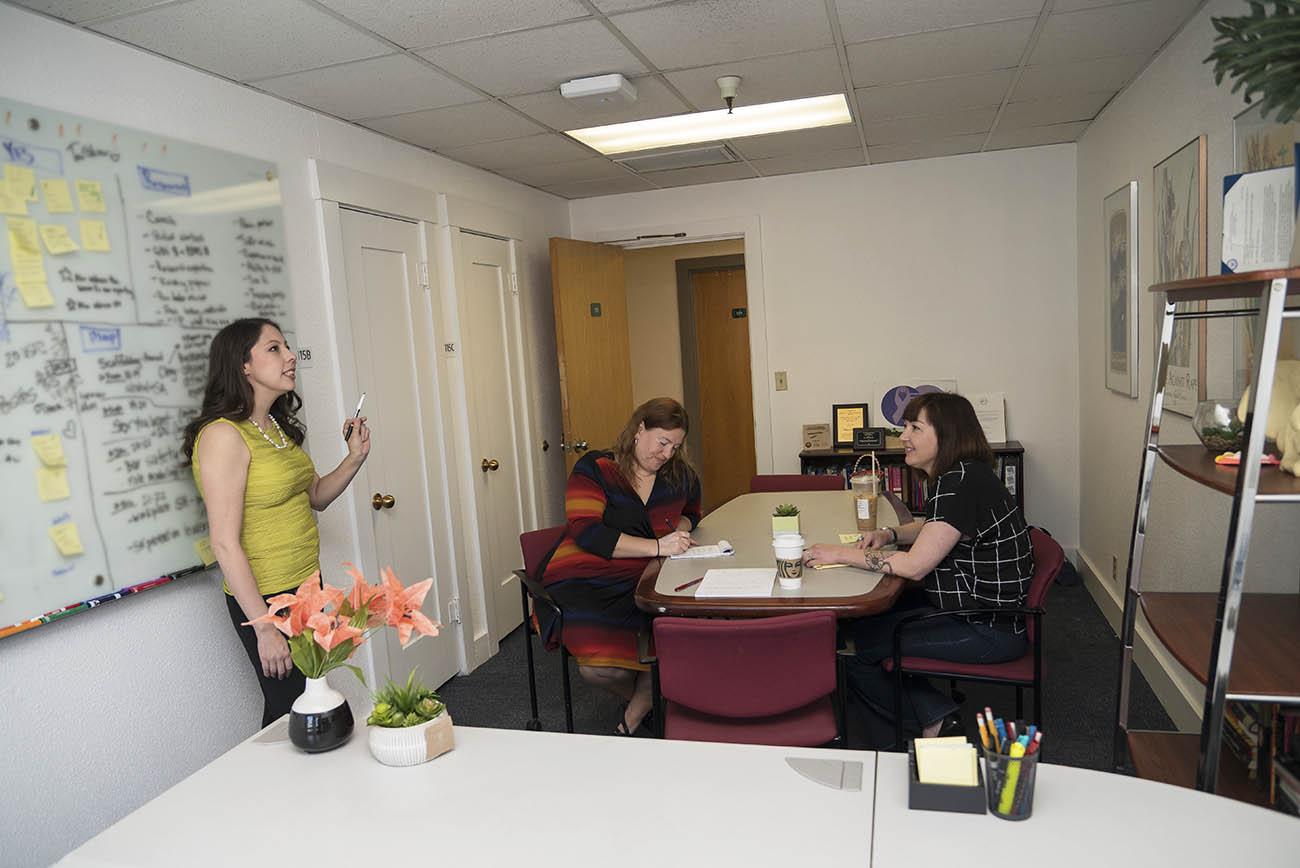 “What was serendipitous and wonderful,” Dr. Lopez said, “is that the Cub Scout pack and Scouts BSA troop just starting at our temple also happened to be led by some folks in the scouting community who identify as LGBTQ. And, so, we had kids of all walks of life, including trans and gender-nonconforming kids as well as kids with disabilities.”

Since troop leaders are open to kids of any orientation or background, the local BSA council refers parents to the troop when they are worried about their child’s acceptance in scouting, Dr. Lopez said. “They say, ‘We know exactly who to send you to,’” she added.

Now serving as a committee chair and den leader for the troop, she said all adult leaders in scouting undergo background checks and complete comprehensive child abuse recognition and prevention training.

“I was surprised at how evidence-based the training was. All the information was correct and up to date. It was just really incredible. I could tell they put a lot of thought into it. That was really reassuring for me,” Dr. Lopez said.

From law to moms to safer bars

Dr. Lopez is the inaugural director of the UArizona Consortium on Gender-Based Violence. She previously served as relationship violence programs assistant director at the UArizona Mel and Enid Zuckerman College of Public Health, where she’s an assistant professor.

She has been recognized often for her work, most recently a 2021 Tucson “40 Under 40” Award for her public health efforts on substance abuse, family and sexual violence prevention, and victim protection. She collaborates as a researcher, delegate and liaison with various universities and local, state and national groups and government agencies. 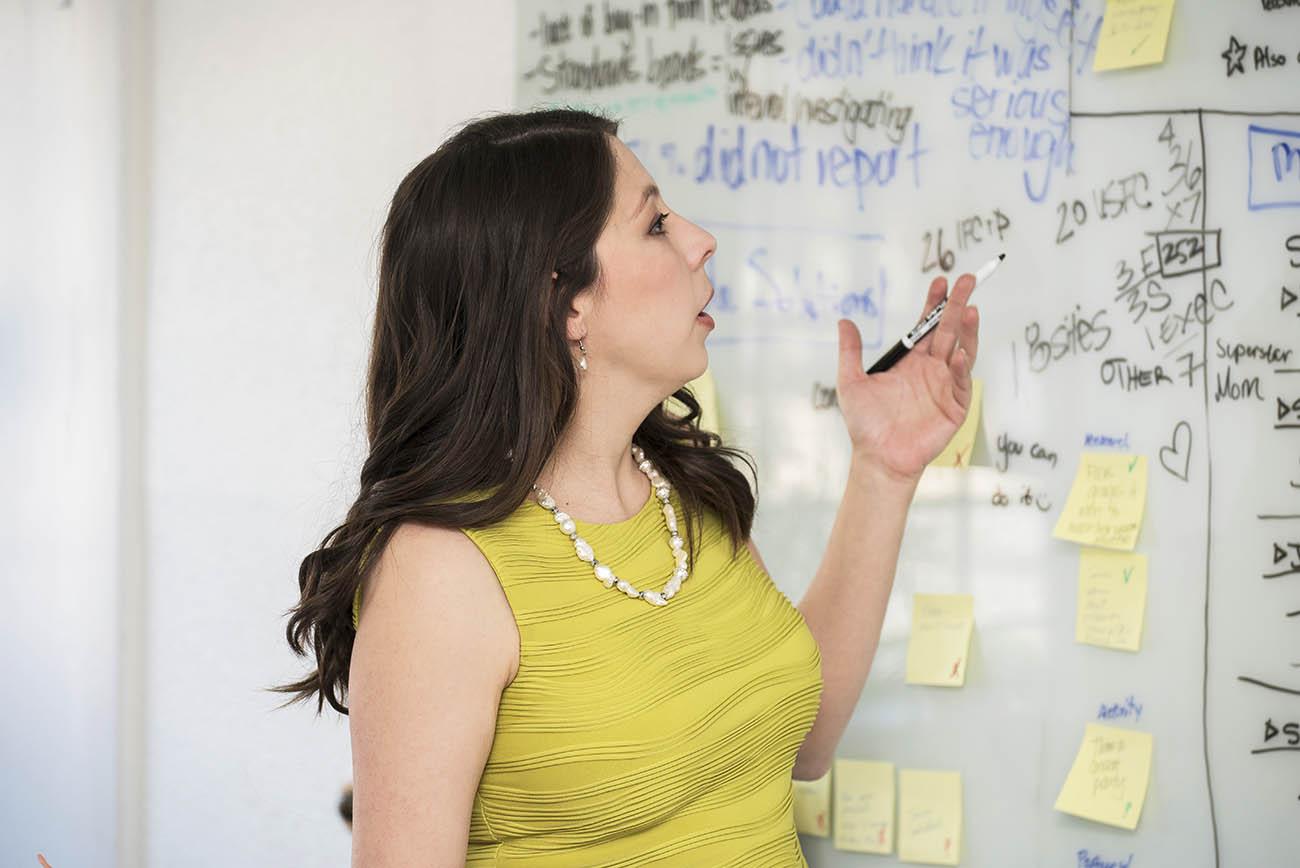 This wasn’t always her focus, though. Originally, Dr. Lopez thought she might be an attorney.

“I wanted to be a lawyer or work in the justice system,” she said. But working on studies for youth substance abuse prevention, including families and young mothers who might suffer from these and other issues like domestic violence, she became discouraged with efforts that seemed to address symptoms without getting at the root of the problem.

Dr. Lopez pivoted by getting her master’s degree in public health and a doctorate in maternal and child health at the Zuckerman College of Public Health. Her goal was to work with “moms and babies – to create healthy families, rather than trying to repair them later” – as by now she was a mom herself. To make ends meet, she took a human sexuality teaching assistant post where she met the person who would become her mentor, Mary Koss, PhD, Regents Professor in the College of Public Health’s Health Promotion Sciences Department.

Dr. Lopez noted Dr. Koss published the first national study of rape on college campuses in 1987, a study that helped support passage of the 1994 Violence Against Women Act. Dr. Koss also secured an Arizona Department of Health Services internship for Dr. Lopez to help design a sexual assault prevention training program for restaurant and bar wait staff who serve alcohol. That set Dr. Lopez on the trajectory to where she is today.

One thing leads to another

The internship led to the Arizona Safer Bars Alliance and a $3 million federal grant to study how to make substance abuse and sexual violence bystander-prevention programs more effective. It led to her becoming the College of Public Health’s sexual assault prevention programs coordinator. It also led to a $1.5 million gift from the Chris and Carrie Shumway Foundation to start the gender-based violence consortium she now heads. 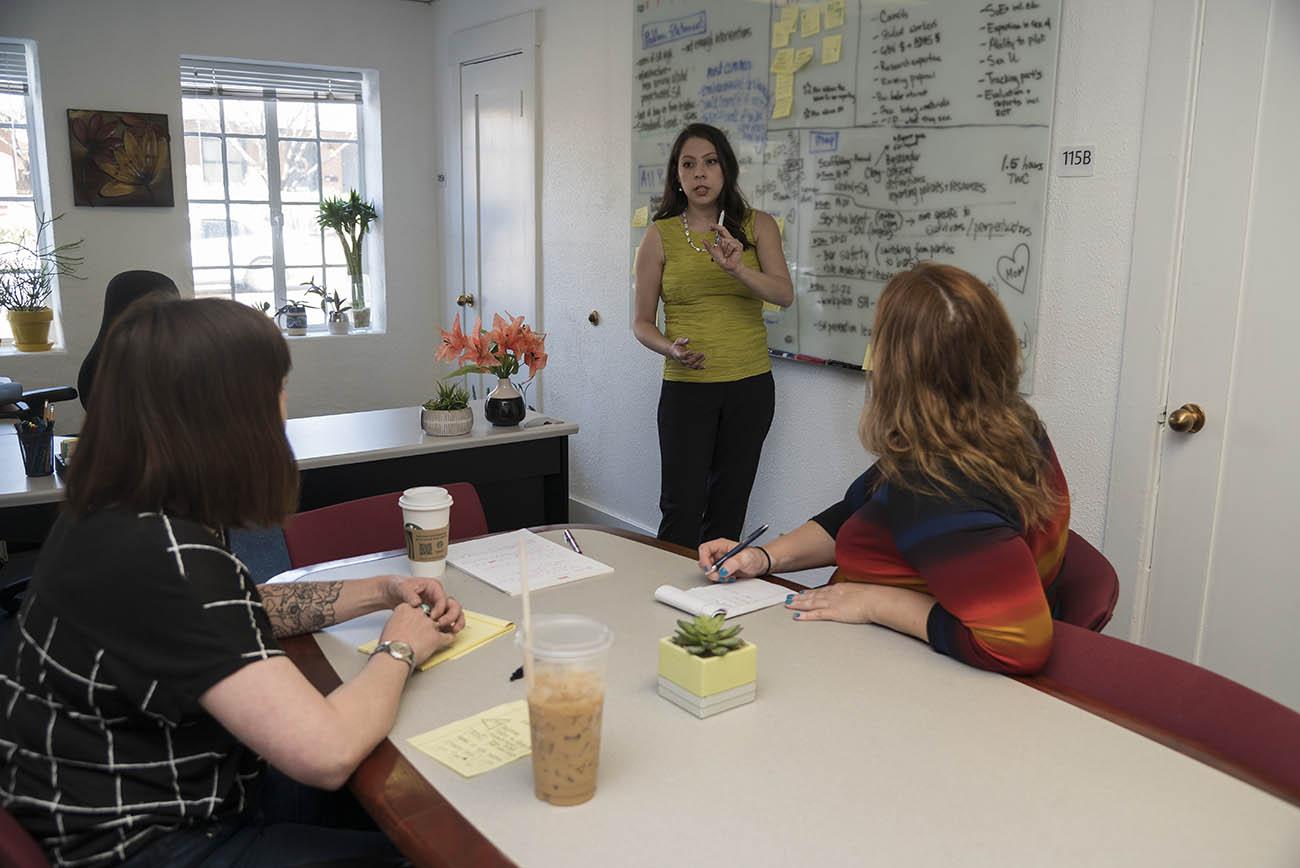 And it led to a $500,000 U.S. Justice Department grant that created a rape forensic exam program at Banner – University Medical Center Tucson. That grant also helped create a UArizona Sexual Assault Response and Resources Team, with funding for expansion of victim support services and prevention training to include campus ministries, residence hall advisors and sorority/fraternity programs.

Dr. Lopez is looking now for student workers to help facilitate another training effort that’s part of an Enhanced Assess, Acknowledge, Act Program study funded by the philanthropy organization Arnold Ventures LLC. Focused on first-year college women, the program is one of a few proven successful at reducing victimization, she said.

With that, Dr. Lopez took a deep breath and exhaled. “I mean, literally, Mary walks into my life one day and changed it completely. It’s just been really, really wild. I’m very thankful to her,” she said.

The work often seems like a long, slow slog, Dr. Lopez admitted, without much change. This was evident in a recent paper she and Dr. Koss wrote analyzing a 30-year national sample of rape or rape attempts on college campuses. It showed 1-in-3 female students in 2015 (versus 1-in-4 in 1985) reporting incidents, with those associated with alcohol or drug use higher by half (75% vs. 50%).

“Unfortunately, what we saw is rates actually got worse. Still, I’ve seen progress in awareness and prevention programs. It’s slow and it’s frustrating. But we’re starting to see more interest in public policy and funding to support campus sexual assault prevention,” she said.

For instance, the new Violence Against Women Act requires colleges to complete a regular campus climate survey to measure sexual assaults over time and publish results publicly. Institutions can’t hide that information or downplay that sexual assault is still a huge issue on college campuses, she added.

While greater dialogue may prompt public policy changes that mandate institutions to do better, Dr. Lopez said progress on reducing gender violence and sexual assault at the root of the problem requires an earlier start to make people more aware and respectful of each other, and to establish a new ethic for healthy boundaries and mutual consent for physical contact. “Sexual assault doesn’t appear out of nowhere when someone steps foot on a college campus,” she stressed.

Starting earlier in prevention has to go beyond “good touch, bad touch” programs, she said, pointing to Our Whole Lives, or OWL, and Coaching Boys into Men sexuality and healthy relationships curricula for middle schoolers as excellent examples. A Call to Men, who’s co-founder Tony Porter has spoken multiple times at UArizona, offers a healthy, respectful manhood training model for college-age students, she said.

“There’s still a lot of work that needs to be done in prevention. How do you do it better? You need to get people talking about the issue. But you also need a tangible willingness on campuses from students and faculty and staff and leadership to do better. Words are not enough. We need action,” Dr. Lopez said.

When asked how she stays positive about her work, she points to feedback she gets from students about the value of what she does and the successes of advancing prevention programs at UArizona.

“Being able to see this tangible progress, even though it takes longer than any of us would want it to, feels good. And students care. They want to help. That’s really what keeps me going,” Dr. Lopez said.

She also wants it to be better for her children, who she hopes will be Wildcats for life like her. “I have a daughter and son, and I care about what happens to them when they get to college,” Dr. Lopez said.