Elise Lopez, DrPH, MPH, an assistant professor in the Health Promotion Sciences Department at the University of Arizona Mel and Enid Zuckerman College of Public Health, was recognized at the end of 2021 with a “40 Under 40” Award.

Dr. Lopez was one of 40 Tucsonans under the age of 40 – including four from UArizona Health Sciences – recognized for their demonstrated leadership and community impact. The awards are presented annually by Snell & Wilmer with the Tucson Hispanic Chamber of Commerce and the Arizona Daily Star. 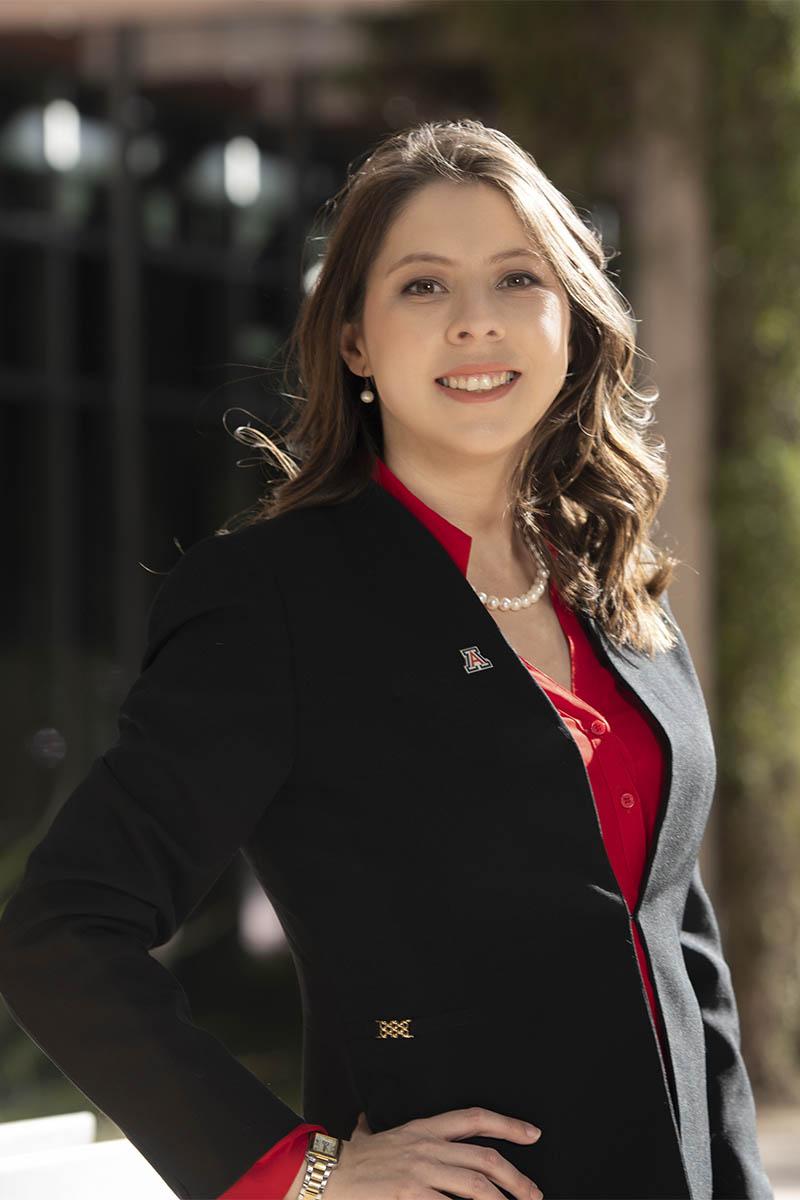 Dr. Lopez is an expert on gender-based violence prevention and response. She also is director of the UArizona Consortium on Gender-Based Violence in the College of Social and Behavioral Sciences, and principal investigator on a UArizona grant from the U.S. Department of Justice funding a new Forensic Exam Program for victims of sexual assault at Banner – University Medical Center Tucson. That forensic program was funded in 2020, and fully launched the following summer. It’s supported by the Southern Arizona Center Against Sexual Assault (SACASA); the UArizona Survivor Advocacy Program, Sexual Assault Nurse Examiner (SANE) Program and Petersen HIV Clinics; UArizona and Tucson Police Departments; Pima County Attorney’s Office; and other local victim services providers.

“To be recognized for advocating on behalf of sexual or gender-based violence victims, which often takes place in the background, is really special to me,” she said. “The kind of work I do is depressing. It's not something a lot of people want to spend 8 or 10 hours a day on. It makes me proud to keep doing this work that can be very hard to do every day. And it makes me feel some hope that people who aren't already in this area of activism think that this is important.”

Dr. Lopez noted that, previously, any sexual assault victim at a hospital or clinic was redirected to Tucson Medical Center, which had the area’s only forensic exam program. Now, with Banner – UMC Tucson added as a second site through the grant, more options mean better likelihood such assaults will be followed up on more comprehensively on behalf of victims, she said. Although the goal of the grant is to expand students’ access to forensic exams, the service is available to anyone in the community.

As part of the DOJ funding, Dr. Lopez also heads up a new UArizona Sexual Assault Response and Resources Team that works with the Survivor Advocacy Program, Office of Institutional Equity, student emergency services, campus ministries, residence halls and other units on related issues on campus. Some elements include training on how to respond in sexual assault cases, as well as a new program to promote awareness and education on sexual assault prevention with UArizona Greek Life.

Last year, the consortium announced a partnership with the College of Social and Behavioral Science’s Human Rights Practice Program to launch a new master’s certificate in gender-based violence studies.

Her UArizona career began in 2009 as a researcher with the Southwest Institute for Research on Women. In 2014, she became coordinator of the College of Public Health’s sexual assault prevention programs, advancing to assistant director and adjunct faculty two years later. She’s been an assistant professor since 2019, and director of the consortium since 2018.

In addition, Dr. Lopez is co-developer with her mentor and UArizona Regents’ Professor Mary Koss, PhD, of Safer Bars, a sexual assault prevention training program for bartenders and other liquor servers. She was one of two non-attorneys on the American Bar Association’s Task Force on College Due Process Rights and Victim Protections. She is on the boards of Emerge! Center Against Domestic Abuse, Tucson Jewish Community Center and the Winding Road Theater Ensemble. She also volunteers with the BSA Catalina Council Cub Scouts Pack 613 Inclusive Family Scouting Program as a committee chair and den leader. She has worked with numerous local, state and national groups as well as colleges, nonprofits and government agencies on family, gender and sexual violence prevention issues.