Dr. Laura Mercer was the driving force behind the passage of a new law expanding access to prescription birth control.
January 20, 2022 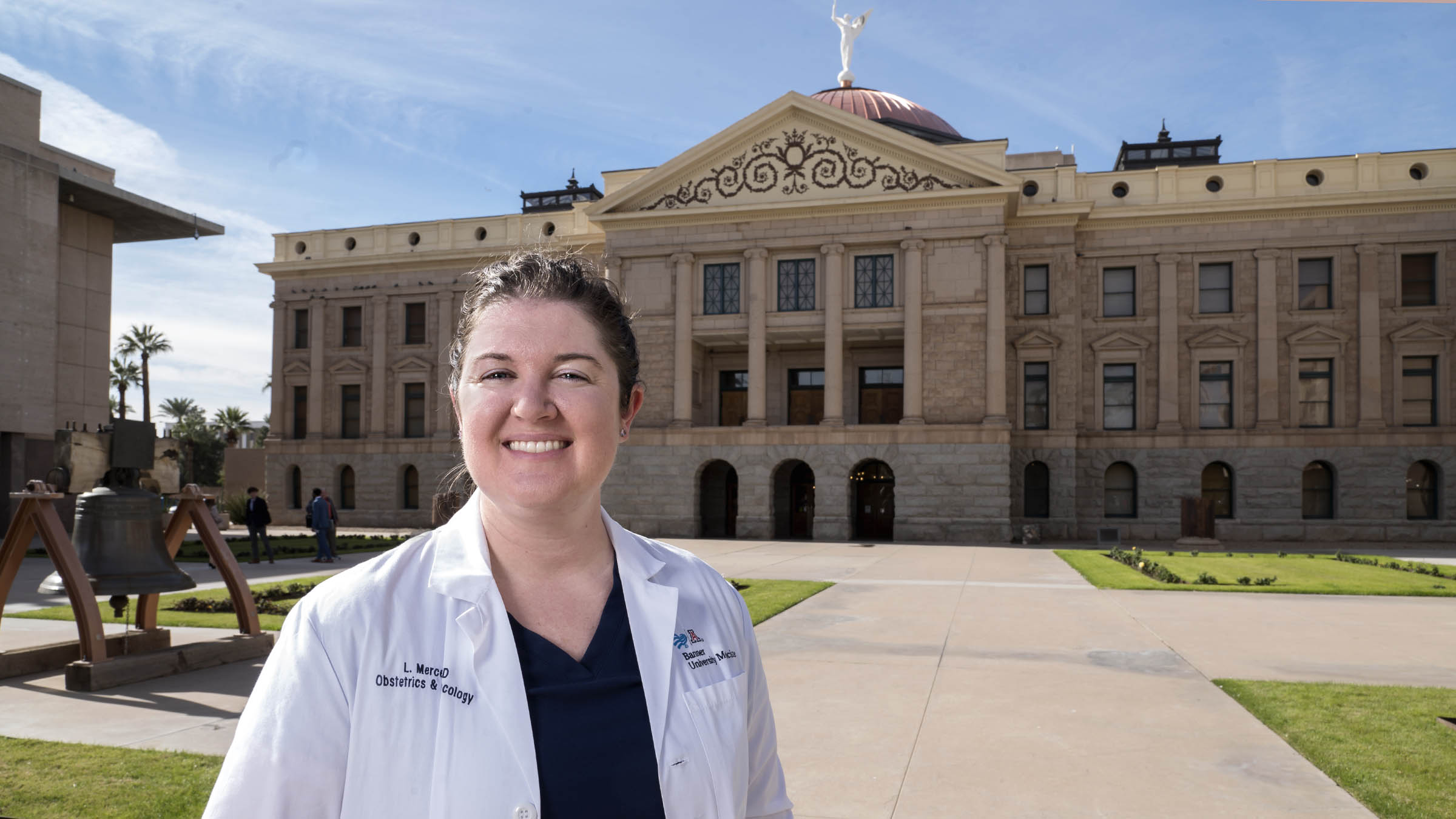 Laura Mercer, MD, MPH, MBA, got to know the inside of the Arizona State Capital very well during her Master of Public Health internship. She worked with lawmakers to pass a bill that will make it easier for women to obtain prescription birth control in the state.

When Laura Mercer, MD, MPH, MBA, was a first-year medical student at the University of Arizona College of Medicine – Tucson in 2005, she recognized that public health policy and practice were key to successfully supporting an individual’s health. She enrolled in her first graduate course in public health that same year.

Sixteen years later, when she graduated in December with her Master of Public Health degree from the Mel and Enid Zuckerman College of Public Health, she had accomplished far more than formalizing her public health credentials – she had written a new Arizona law that makes prescription birth control more accessible for women. 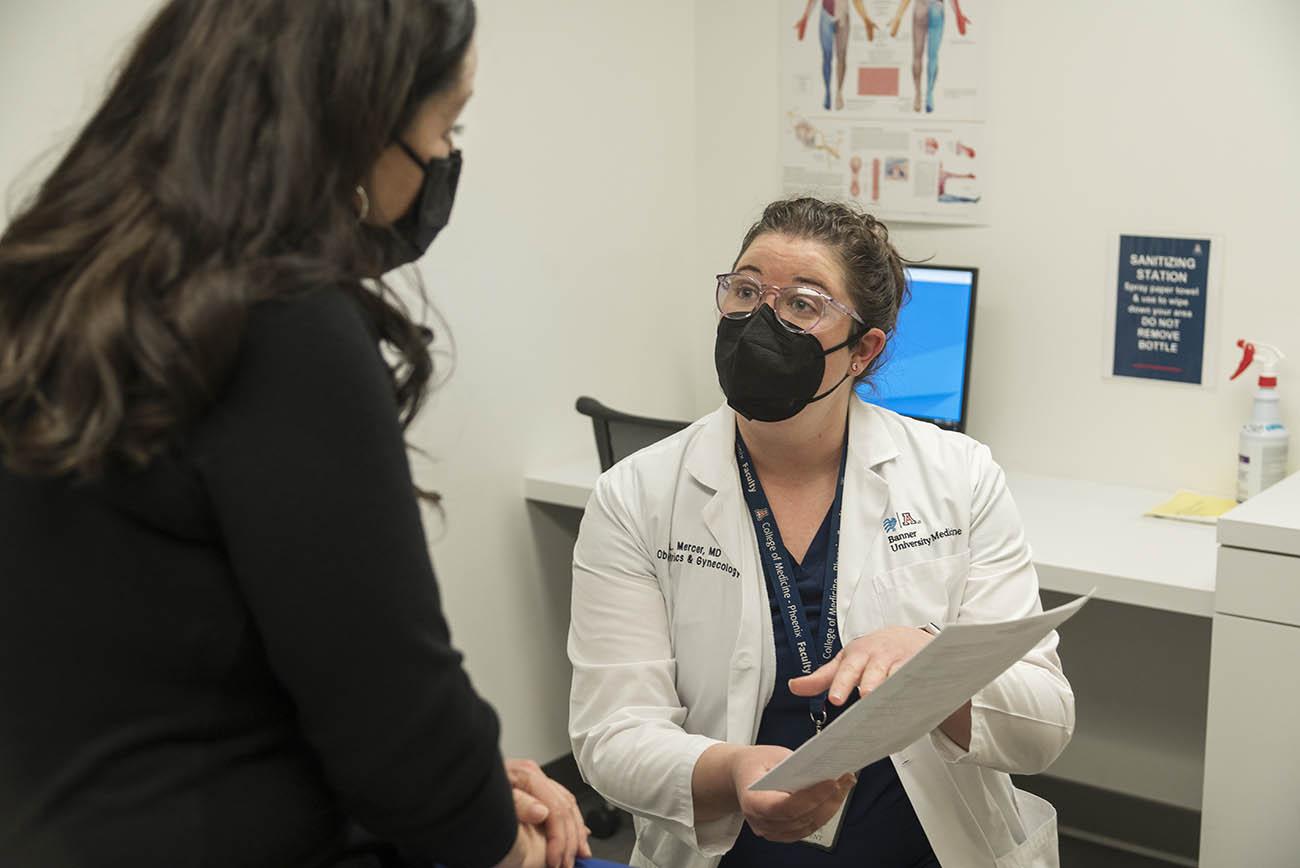 Dr. Mercer, an associate professor of obstetrics and gynecology at the College of Medicine – Phoenix, enrolled as a full-time MPH student three years ago. The program includes an internship in an area of public health of interest to each student. For Dr. Mercer, that meant setting up an internship with the American College of Obstetricians and Gynecologists (ACOG).

“The field of obstetrics and gynecology, including women’s health and reproductive health, is continuously the subject of political discussion and often complete legislative interference,” Dr. Mercer explained. “I was interested in pursuing a proactive project where legislation could be used to improve women's health. The United States is the only developed nation with a worsening maternal mortality rate. It's essential that we make more noise about this and that we enact measures to help change the trajectory of this horrifying statistic.”

In 2019 she started her internship at ACOG, a 60,000-member professional organization focused on the advancement of women’s health care through continuing medical education, practice, research and advocacy. Dr. Mercer focused on an area that she knew could make a significant difference in women’s health – access to prescription birth control without needing to go to a doctor first.

“There’s quite a bit of time and money associated with obtaining a prescription. I have patients who have to take an entire day off from work in order to take multiple public transit vehicles to get to my office, where they then sit and wait in my waiting room because doctors are always running behind,” Dr. Mercer said.

According to the Brookings Institute’s Center on Children and Families, about $12 billion in taxpayer money is spent each year on unintended pregnancies. The center estimates this number could be cut in half through public policy changes that invest in proven pregnancy-prevention strategies, including education, health care and easier access to birth control. 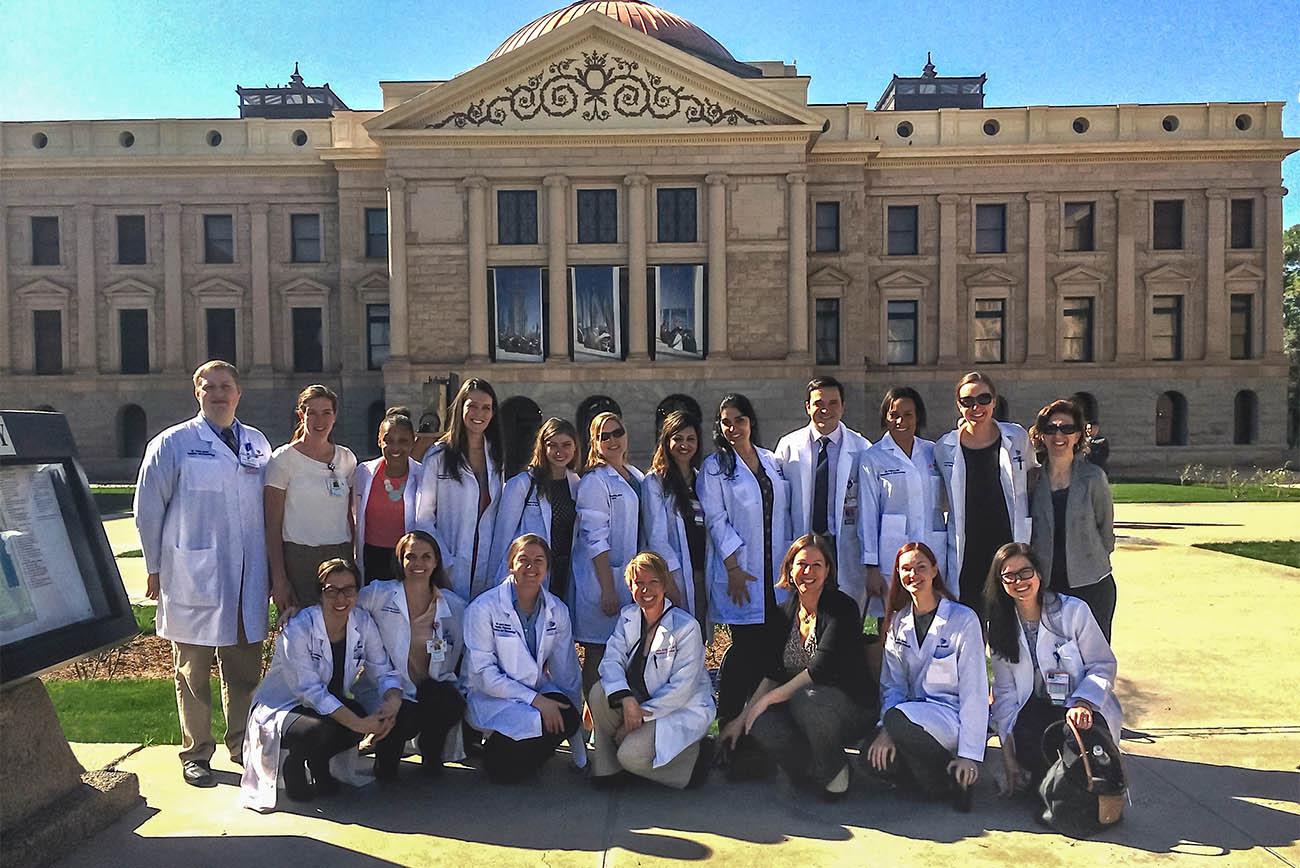 ACOG has advocated for birth control pills, patches and rings that have demonstrated safety and efficacy to be available over the counter in the U.S. For years, however, FDA regulations have prevented the sale of hormonal contraceptives without a doctor’s prescription. While this may have seemed like a dead end given the FDA’s stance on the matter, Dr. Mercer knew that several states had passed laws that met the FDA’s requirements through standing-order prescriptions. She also knew Arizona already had a similar standing-order prescription law in place that allows pharmacists to dispense Naloxone, a prescription drug that helps reverse an opioid overdose, without a patient-specific doctor’s prescription.

“Our recommendation was for Arizona to adopt a standing order that would come from the Department of Health Services for a non-patient-specific prescription that would allow pharmacists to dispense a self-administered contraceptive after the patient undergoes a self-screening,” said Dr. Mercer. “It seemed like a no-brainer because the structure is already in place for Naloxone.”

Encouraged by her findings, Dr. Mercer reached out to Heather Carter, EdD, who at the time was an assistant professor of practice and the associate director of the Center for Rural Health in the College of Public Health, and an Arizona state senator, for support in creating and passing the legislation.

Dr. Carter told her that elected officials rely on content experts in many disciplines in order to make the best decisions related to policy.

“Through the internship process, Dr. Mercer demonstrated that it is possible for students and licensed professionals to have an important impact on health policy,” said Dr. Carter. “I hope this success story inspires other students to explore opportunities to advance good ideas at the Arizona Capitol.”

Dr. Mercer recognized that passing legislation is more than just having a good idea supported by research. “It was important for me to get to know our elected officials and understand what motivates them. Building a coalition of stakeholders was essential, as this allowed us to demonstrate the importance of the issue as we met with legislators.”

As part of that process, Dr. Mercer worked with organizations such as the Arizona Pharmacy Association and the Arizona Medical Association. When it came time to draft the legislation, she looked at models from other states that had already passed similar laws. She found an ideal model from Utah and used that as a template.

Once a draft of the bill was written, Drs. Mercer and Carter worked with key Republican senators to get their support as cosponsors of the legislation. It was introduced into the Senate’s 2020 legislative session and “we were thrilled when the bill unanimously passed out of the Senate,” said Dr. Mercer. “But then, as we all remember, COVID came to Arizona and shut everything down and no bills got hearings in the House and the legislature adjourned early.”

“Rome wasn’t built in a day, as they say, and legislation isn’t passed in a day either,” said Dr. Mercer. “The bill had to be reintroduced for the 2021 legislative session, which meant we essentially were starting over with much of our advocacy efforts with the newly elected legislators.”

The new law – officially SB1082 – ultimately was passed by the state legislature and signed by Gov. Doug Ducey in 2021. It is now in the rule-making phase, during which the state and county health departments and state pharmacy board are working out the processes and procedures that pharmacists will follow.

When it goes into effect, “an adult woman can go to a pharmacy, complete a questionnaire about their health history, then have self-administered birth control dispensed to them by the pharmacist if they have no medical contraindications to the contraception,” explained Dr. Mercer. “The dispensing pharmacist would meet with the patient for instructions for use, as they do now for any other prescription.”

“I think it will have a big impact, and I’m excited to see a student doing work that contributes to real change,” said Kirin Goff, JD, MA, director of the Applied Health Policy Institute at the College of Public Health, who was one of Dr. Mercer’s advisors during her internship. “I trust Dr. Mercer’s expertise and professional opinion on policy in this area, and I’m glad we’re taking steps to increase access to contraception.”

While Dr. Mercer said there is “not a chance” that she will run for public office, she will continue her work with ACOG to advocate for women’s and reproductive health. “We are working with a coalition in Arizona to expand Medicaid coverage for 12 months postpartum – currently it ends less than two months after giving birth for many women.”

“Good legislation solves problems for people,” said Dr. Carter. “In the case of this bill, there was a clear opportunity to make contraception more readily accessible for women in Arizona. I worked on this concept for several sessions, but not until we had Dr. Mercer’s involvement and the support of several professional associations were we able to pass the bill.”

“I am incredibly thankful for all of the amazing faculty and staff that I have worked with throughout the MPH program,” Dr. Mercer said. “My public health education has already made me a better doctor and educator, and I think it makes me a more informed and proactive citizen, too.”