Sssssaving Arizonans, One Bite (or Sting) at a Time

The Poison Center’s snakes, scorpions and spiders at the College of Pharmacy train future doctors and pharmacists to recognize venomous bites and stings.
October 11, 2021 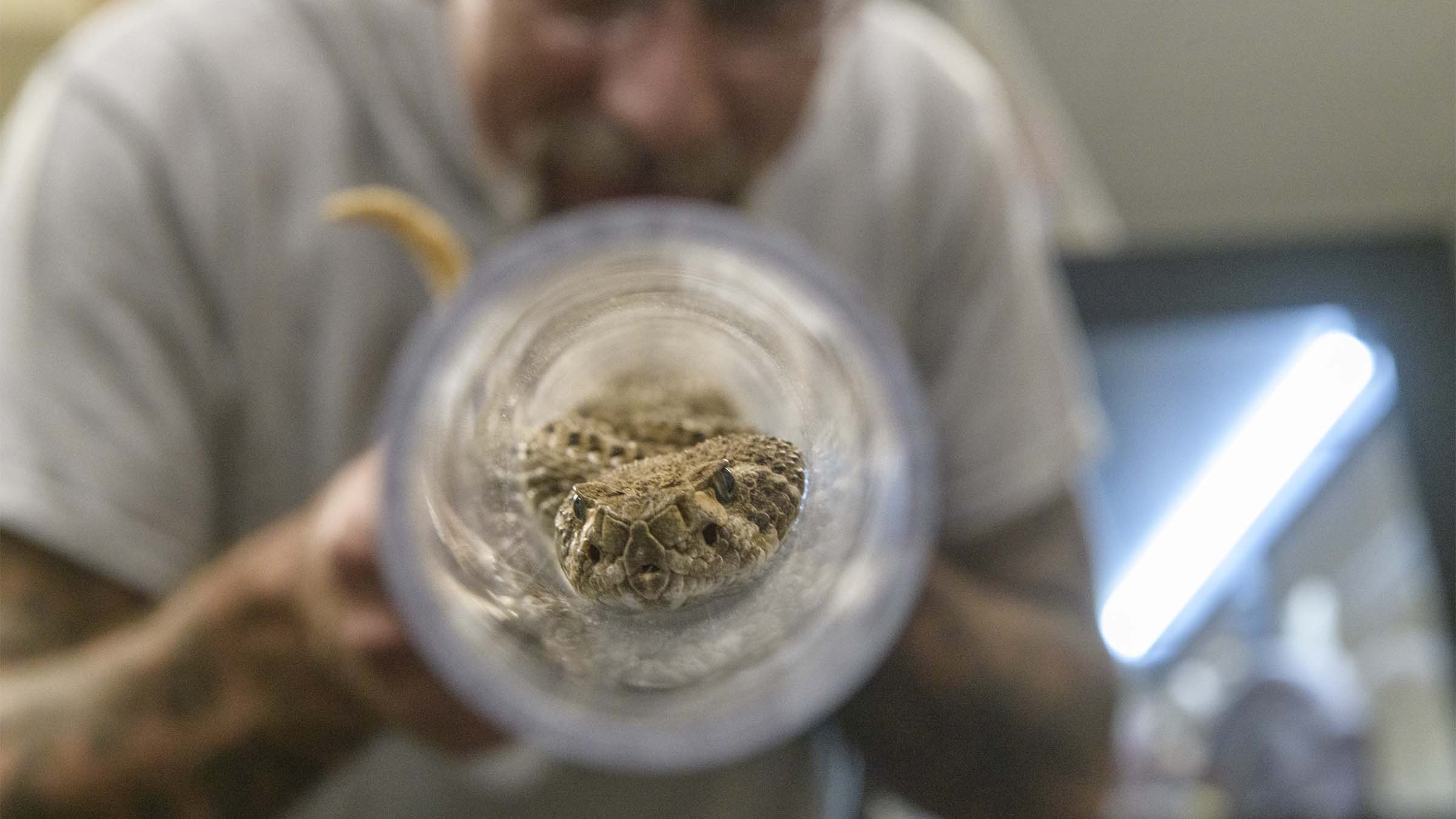 Poison Center venomous reptile curator Dan Massey, PharmD, uses a clear acrylic tube to safely allow toxicologists an up-close examination of a Western Diamondback rattlesnake. Once the snake’s head is in the tube, it cannot turn around and bite anyone, but can be closely observed.

Sssssaving Arizonans, One Bite (or Sting) at a Time

You know you are in for a different sort of interview when in the middle of hearing the answer to your first question, you have to stop Dan Massey, PharmD, BCPS, to make sure you really are hearing the unmistakable noise of 30 agitated rattlesnakes.

Or when asked to describe himself, Steven Dudley, PharmD, DABAT, director of the Arizona Poison and Drug Information Center (AzPDIC), says with a laugh “In my free time I enjoy long walks on the beach and cooking bacon.” 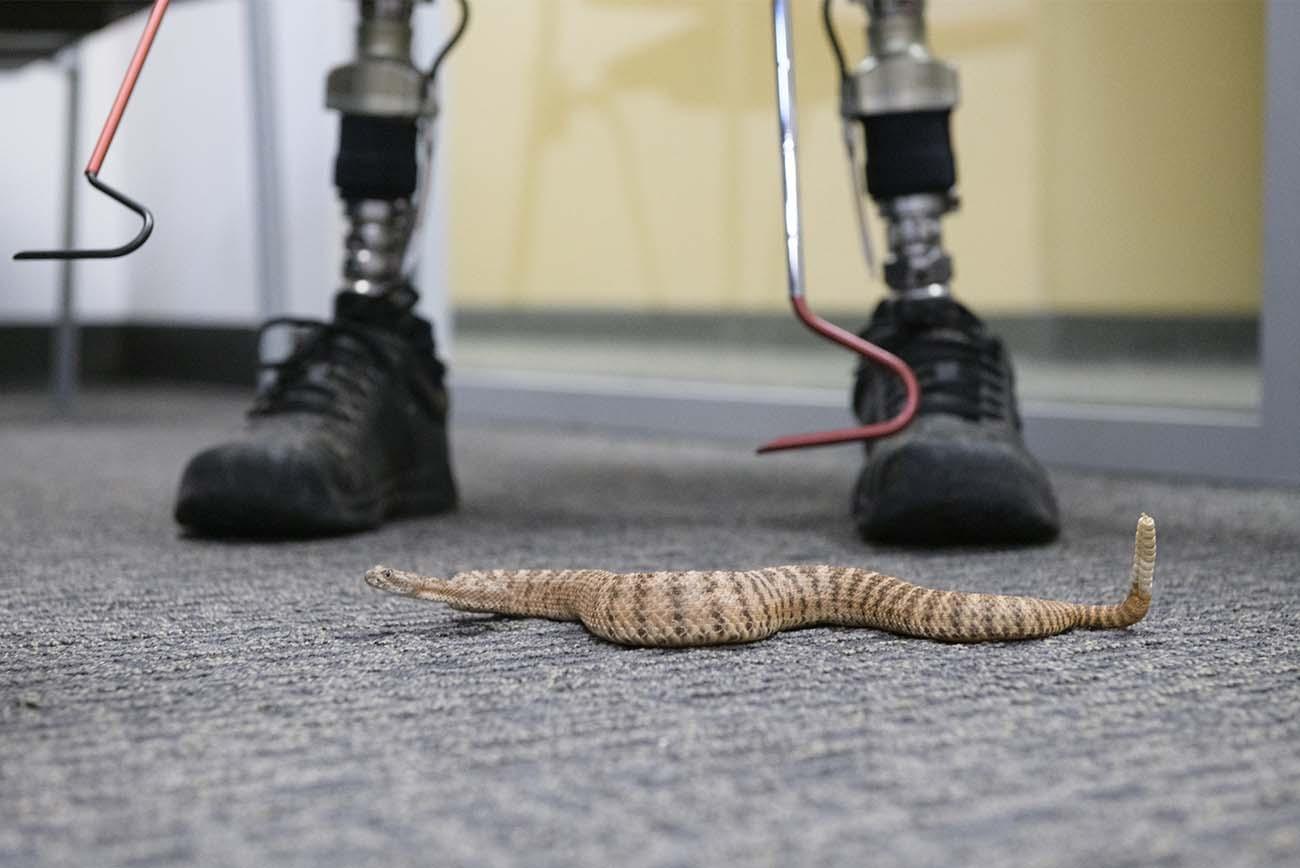 No, it’s not typical. But neither is the center’s approach to making sure Arizonans are kept safe from accidental poisonings as well as bites and stings by venomous creatures. By having a variety of poisonous snakes, Gila monsters, scorpions and spiders in the AzPDIC, operators can quickly become familiar with and comfortable directing treatment of bites or stings.

“We don't just have these things because they're cool,” said Dr. Dudley. “I mean, that's a big part of why we have them, but it’s also because we're training current and future pharmacists and physicians to practice better medical care to improve the lives of Arizonans.”

Dr. Massey, the venomous reptile curator at AzPDIC, is a clinical staff pharmacist at the Southern Arizona VA Health Care System and a 2010 College of Pharmacy graduate. He was the driving force behind having venomous animals in the Poison Center. A self-described lifelong “snake guy,” Dr. Massey is living out his childhood dream of working with snakes and educating both the public and the toxicology world about venomous animals.

“I did my residency as a clinical pharmacist with what was then University Medical Center, which is basically attached to the College of Pharmacy,” Dr. Massey said. “One of the things that fascinates me about being a clinical pharmacist is not only being able to know how to treat an envenomation with antivenom, but also understanding how and why venom causes these clinical symptoms. 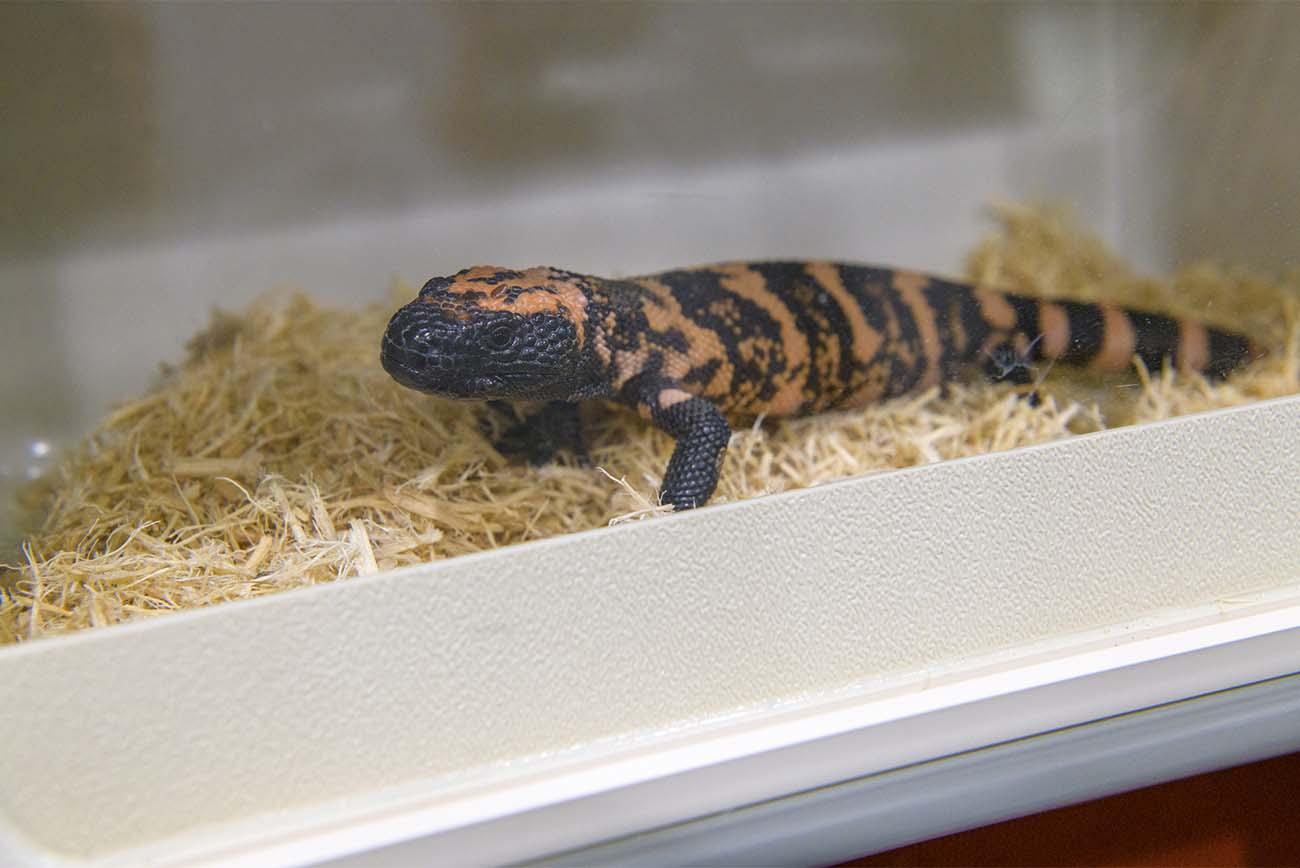 “What about the venom composition, what aspect of this animal venom is actually causing the symptoms that lead to some of these clinical presentations we see in the hospital? And what better way to make some of this information stick in an individual's mind than to have an actual live animal there. It’s just one of those visual keys that just help information stick.”

“A lot of our fellows and toxicology residents will come in from states where they don't have envenomations,” Dr. Massey said. “They don't see rattlesnakes. This is their one chance to be exposed to something unique. A big part of AzPDIC is envenomations. Being able to physically see and treat patients with antivenom, then observing a live rattlesnake on display in the center, really solidifies the learning experience.”

It’s clear from listening to Dr. Massey and Dr. Dudley that including live animals as visual cues in the AzPDIC is important and exciting to them both. But it also motivates the center’s staff. “When I bring in Peggy, our three-legged Gila Monster, people just go nuts over her,” Dr. Massey said. 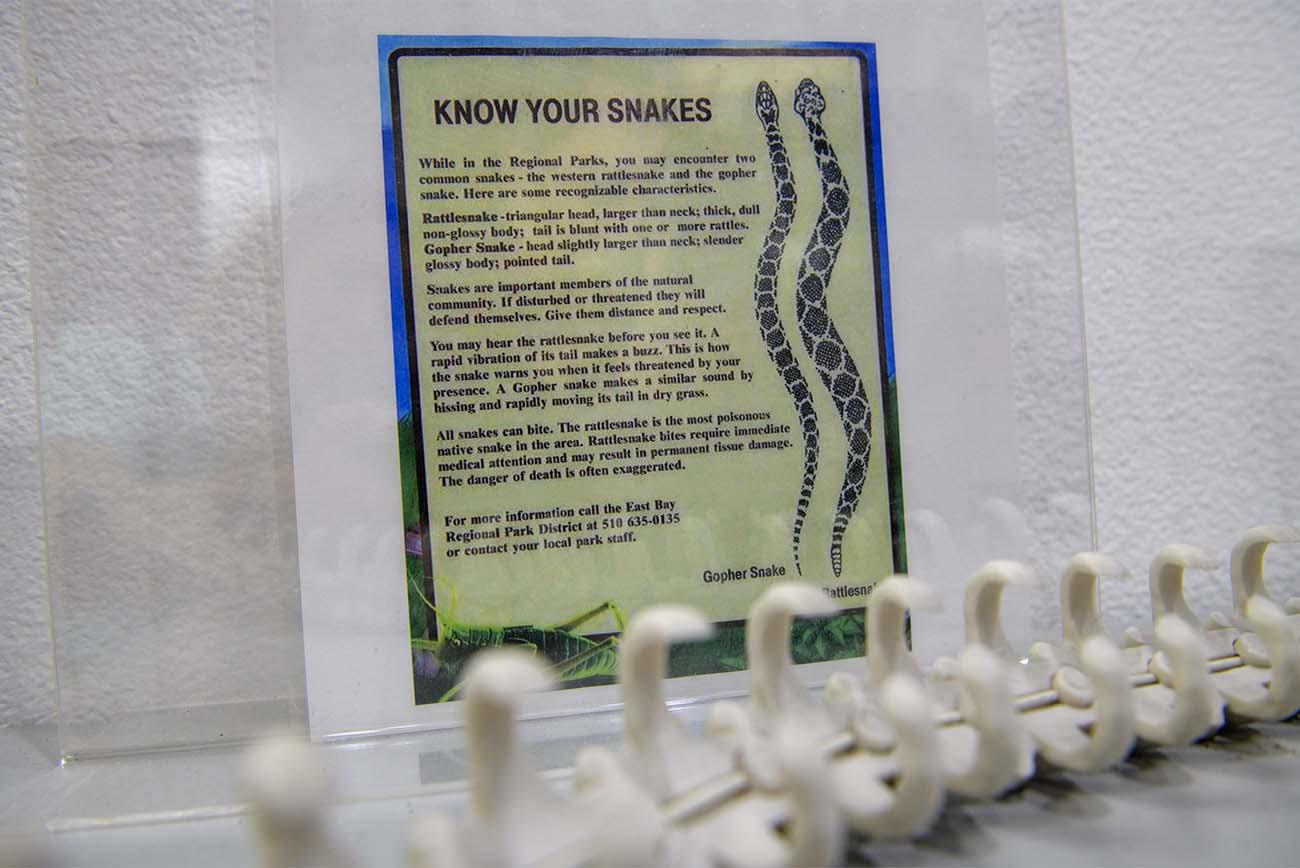 Dispelling myths about the animals is another reason they are in the center. “I think one of the biggest misconceptions about rattlesnakes is that they're aggressive,” said Dr. Dudley. “You know, ‘they're mean, they're aggressive.’ And that's not true. They are defensive, though. They're very, very defensive. If you're walking by a rattlesnake, it doesn't know if you're minding your own business or you're trying to harm them if you get up in their space, and that’s where people get into trouble.”

Dr. Massey, who has to undergo yearly permit renewals by the Arizona Game and Fish Department to have the animals, will bring the snakes out of the cages and give lectures. The snake is unconcerned or just interested in getting back into its home, he said. “It's just hanging out,” Dr. Dudley adds. “It's not chasing anybody. That sort of reinforces those points that you can't get by just looking at a YouTube video or reading something online. That goes a long way.”

“Being able to physically see and treat patients with antivenom, then observing a live rattlesnake on display in the center, really solidifies the learning experience.”Dan Massey, PharmD, BCPS

Dr. Dudley did warn that only trained professionals should handle snakes, and under no circumstances should you try this at home.

At any one time, the center might have one of dozens of different rattlesnakes such as Western Diamondbacks, Mojaves or smaller species like Sidewinders, as well as scorpions, Colorado River toads and Gila monsters. The animals are in the center for two to five weeks and then return to Dr. Massey’s home.

The animals also are the stars of the center’s Instagram account (@azpoisoncenter), especially when Dr. Massey switches them out.

“I do an Instagram story called ‘What’s in the bucket?’ which is way more popular than I thought it was going to be,” Dr. Dudley said. “When Dan comes on the mornings that we're going to swap out the snakes, I’ll unlock my office where he puts the snakes that are kept in these big buckets.

“We'll post an Instagram teaser, ‘What’s in the bucket today?’ And then we'll unveil the snakes and provide some education about each one.” 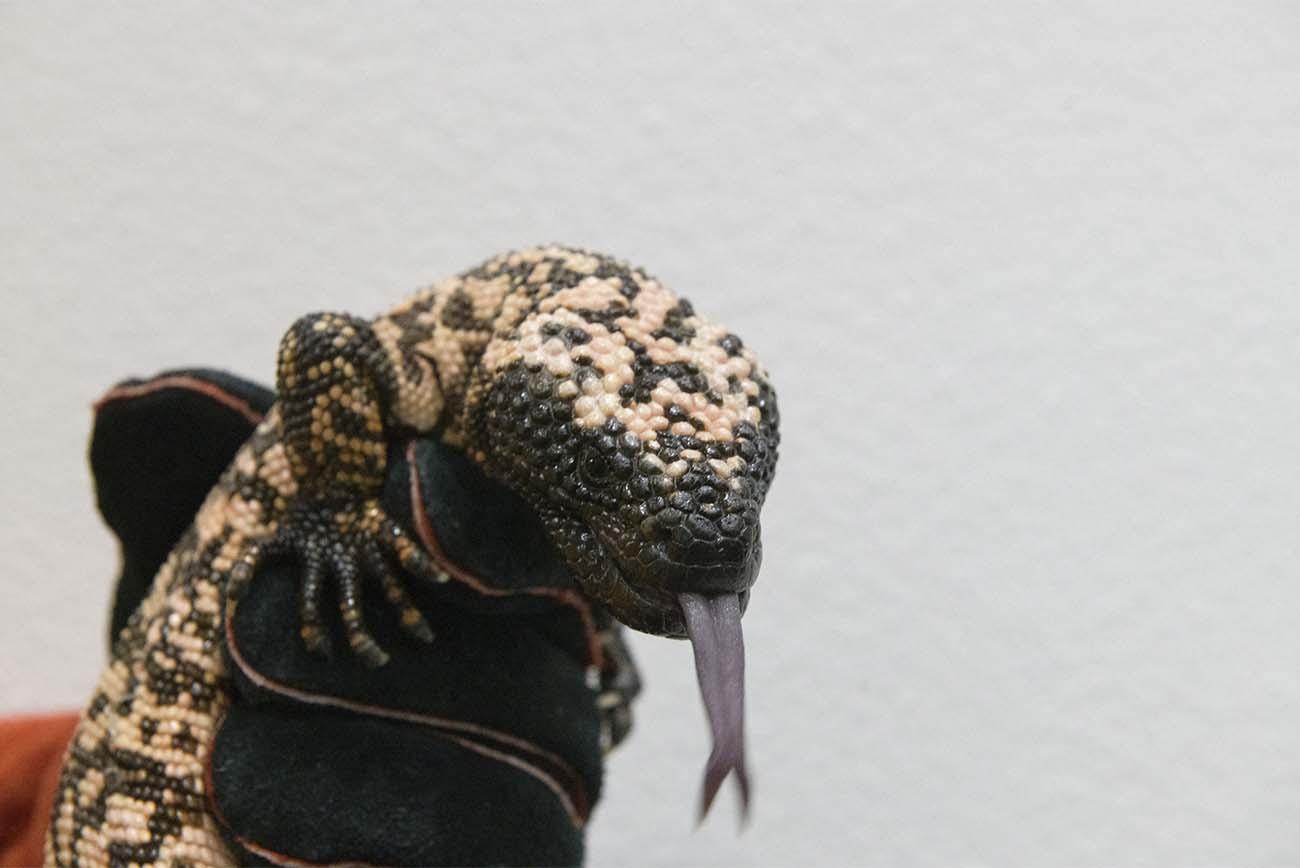 AzPDIC is unique in having the animals on hand to help with calls from the public and in training the future pharmacists and physicians. Being able to ask the right questions can lead to the right answers. “Having that knowledge base is critical, because a lot of who we're training and educating are doctors who are going to go and then treat patients,” Dr. Dudley said.

AzPDIC handles between 150-200 snake bite calls a year, and while April and August-September are usual peak times of the year, snake bites can happen at any time. Snakes, like humans, enjoy good weather and come outside the way humans do. “When we're chilling, they’re chilling, you know?” said Dr. Massey.