Step Inside the Simulation Center Inspired by a Hollywood Set

Tomorrow’s health sciences professionals receive training in a state-of-the-art environment that can simulate any situation in medicine, giving them a safe space to make mistakes as they hone their skills.
February 5, 2020 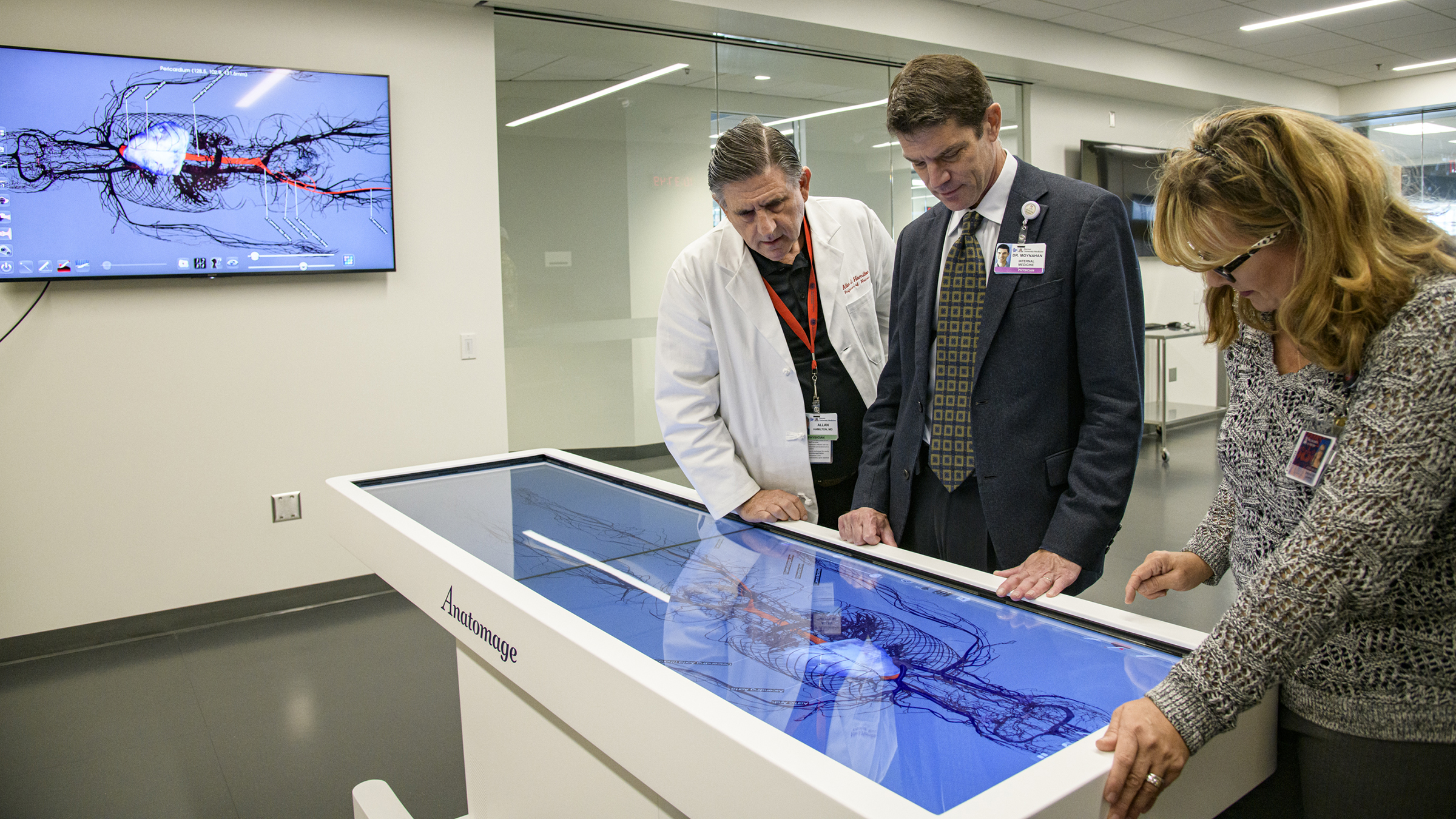 Step Inside the Simulation Center Inspired by a Hollywood Set

Allan Hamilton, MD, is overseeing the construction of a hospital set — just two walls, he says, to give the illusion of the whole room. He’s been the medical consultant for Grey’s Anatomy for more than a decade, and is well-versed in simulating every aspect of health care delivery. But today, he’s not in a studio in Hollywood. He’s in a classroom in Tucson. 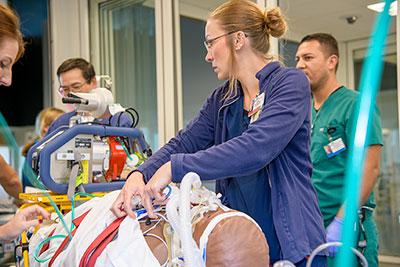 Granted, his “classroom” isn’t a traditional lecture hall. Quite the opposite: It’s essentially a production studio, a two-story soundstage and training environment with multiple reconfigurable rooms that can duplicate any environment where health care providers or first responders might find themselves. He calls this space the SimDeck.

The SimDeck is the crown jewel of the Arizona Simulation Technology & Education Center (ASTEC), and now that it’s settled into its new home in the Health Sciences Innovation Building (HSIB), it’s glistening that much brighter. ASTEC was already highly accredited and regarded, making it one of the premier programs of its kind, but it outgrew its original home in the University of Arizona College of Medicine – Tucson. A bigger and better version now sits on the seventh floor of HSIB in a 35,000 square-foot state-of-the-art facility — the most advanced in the country. There, Dr. Hamilton and his colleagues train the next generation of health sciences students, first responders and engineers, and provide valuable resources to researchers.

Dr. Hamilton describes the SimDeck as a “wide-area virtual environment,” where participants can be fully immersed in any type of simulated event: a large-scale mass casualty, a forest fire, a quarantine. Practicing on the SimDeck can prepare someone for the turmoil of a high-stakes emergency situation before they are thrust into a similar scenario in which actual lives are at stake.

“How do we teach procedures so that people are learning to avoid mistakes before they ever touch somebody?” Dr. Hamilton asks. “Unless we’ve trained, we’re never going to be ready for the unexpected.” 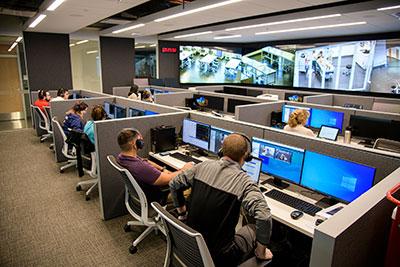 A nearby room, which Dr. Hamilton likens to an air-traffic control room, is filled with monitors overlooking the SimDeck. He can oversee every aspect of the simulation from here, and meet with participants afterward in debriefing rooms to review what happened.

“The control stations work phenomenally,” says David Biffar, ASTEC’s assistant director of operations. “We can watch any scenario from any station, and we can see and hear better than we ever could. If we need to talk to them, we have an intercom.”

ASTEC is attracting minds from a wide swath of disciplines — not just from the UArizona Health Sciences campus, but also from main campus.

“We’re integrating with optical sciences, working on new kinds of scopes. We’re interacting with the theater department, because we need people who can help us simulate different things in our production studio. We’re dealing with electrical and computer engineering. I want lawyers to help us, because we have health care management issues where we need good negotiators,” Dr. Hamilton says. “Medicine is going to be much more of a team sport.”

All the world’s a stage

“In terms of what you can solve with simulation, it’s only your imagination that limits you.”
Allan Hamilton, MD, Regents’ Professor of Surgery, UArizona College of Medicine – Tucson

The 3,000 square-foot SimDeck’s unique design hearkens back to Elizabethan England, where the world-famous Globe Theatre was born.

“I started off life as an English major. I was intrigued by how the Globe Theatre brought the audience in to be involved. The audience was surrounding the stage,” Dr. Hamilton says. “I wanted a circular design for the SimDeck. The architects said, ‘Circular designs are difficult, because you cut a lot of area out.’ So we came up with a rounded rectangle.”

The design was motivated by Dr. Hamilton’s wish to make the process more accessible to the general public.

“What I wanted was almost like an aquarium where the public is free to pass along the outside and watch us working,” he says. “The public can actually walk around this entire aquarium. I wanted to be literally transparent.”

Recruiting the next generation of health care providers

Dr. Hamilton expects that some of the people peering through the “aquarium” windows will be future health care providers, who he hopes to recruit into the field. “A lot of people don’t see themselves being involved in health care,” he says. “I ask, ‘Are you good with computer games?’ Because those are the people we are looking for. The eye-hand coordination skill set is exactly the same. More and more, surgeons are operating like this, looking at the screen while they move their hands.”

ASTEC has partnered with 14 school districts to provide tours and science camps — which provides an opportunity to pitch health sciences as a career to students who might not have considered it otherwise.

“We have these machines that can simulate surgery. An 18-year-old kid tries the machine, and his numbers are better than most expert surgeons in the building,” Dr. Hamilton recalls.

A resource for today’s health care providers and medical researchers

ASTEC is an important part of health care training and continuing education, and has many gadgets in its toolkit: virtual and augmented reality devices, game-based learning systems, and “virtual cadavers” that can be taken apart and put back together. There are also high-fidelity manikins that can be programmed to simulate a wide range of patients. 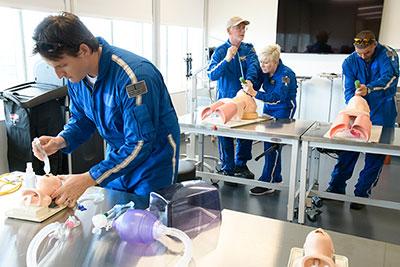 “This facility was designed to provide an incubator for new technologies,” Dr. Hamilton says. “We’re working on an augmented reality pair of glasses that show students where to put sutures when they look at an artificial tissue.”

ASTEC is a national leader in in-house artificial tissue creation for health care education — students and health care providers can practice on these realistic body-part models before taking a sharp instrument to a living, breathing person.

They use their own 3D printing and artificial tissue laboratory, a resource unique within health care simulation centers, which grew out of a collaboration between the colleges of Engineering and Medicine. They produce a total of 55 artificial tissue models, including original designs.

ASTEC provides a rich training ground for the next generation of health care providers, first responders and engineers, and is a valuable testing ground for researchers developing tomorrow’s health care innovations.

“We don’t reinvent the wheel — we’re either making our own because there’s nothing out there that meets our needs, or we’re making something because what is out there is just not good enough,” Biffar says. “Or we’re making modifications to something, such as our chest tube torsos. All the replacement parts are really expensive, but they don’t hold the sutures — they fall right out. So we made a model that holds the suture in, and is cheaper.”

Original artificial organs that can be whipped up in their lab include a uterus with an ectopic pregnancy, adult and pediatric tracheas, burned skin and a distended jugular vein. 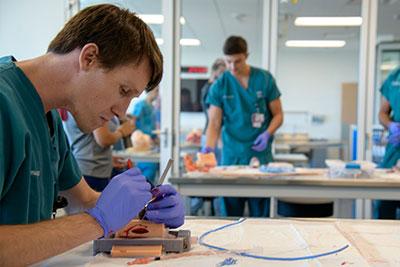 “We can make bleeding tissues, airways, lungs — whatever we want,” Dr. Hamilton says. “We’re working with a flexible material to make artificial blood vessels — a tissue that has its own blood supply.”

ASTEC also provides a valuable resource to campus researchers testing new medical devices and procedures. One such technology, a falloposcope to detect early signs of ovarian cancer, is being developed by Jennifer Barton, PhD, director of the BIO5 Institute.

“Early on, we made a uterus model so she could test the scope,” Biffar says. “That was a tough one, because we didn’t care about the outside of the uterus, we cared about the inside. We needed to represent that advancement into the fallopian tubes with accuracy so that you can see how well the scope would maneuver and how well the optics would be maintained.”

Skyrocketing to the top

ASTEC was founded in the midst of monsoon rains and triple-digit heat in August 2005, when it commanded only 500 square feet on the second floor of the College of Medicine — Tucson. Despite its small initial footprint, ASTEC has always packed a punch, ranking favorably against similar facilities across the country. With his new facility, Dr. Hamilton is setting his sights even higher.

“Imagine what simulation went into landing on the moon!” Dr. Hamilton exclaims. “That’s exactly what we want to do in health care — get to the moon. To do that, we need a Saturn V rocket. No other university has built a system like this.”

Dr. Hamilton has been working with simulation for most of his career. He believes it’s the key to building the health care workforce, improving training, innovating technology and addressing any problems that come down the pike.

“Simulation is the education of the future,” Dr. Hamilton says. “In terms of what you can solve with simulation, it’s only your imagination that limits you.”