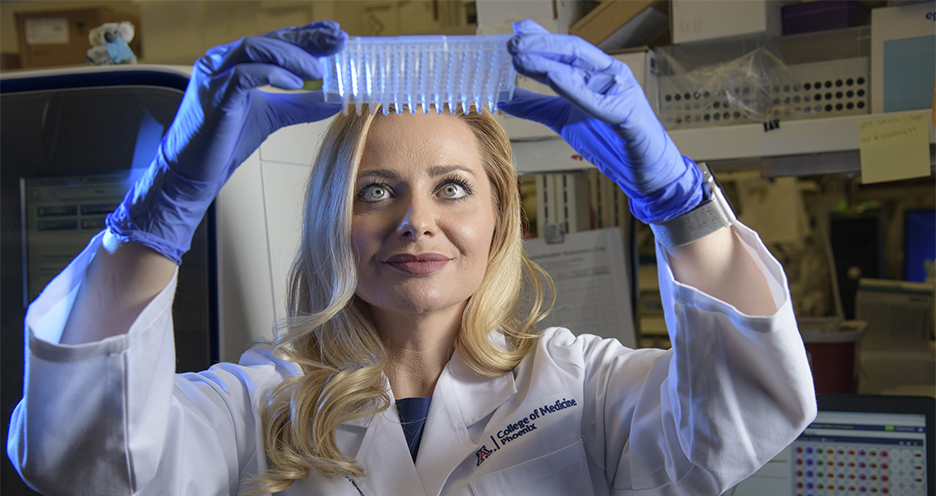 PHOENIX – New research from the University of Arizona College of Medicine – Phoenix provides insight into the role of Prevotella, bacteria found predominantly in women with bacterial vaginosis (BV), and interaction of these bacteria with endometrium, the lining of the uterus. 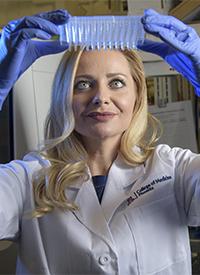 Understanding the function of these vaginal bacteria could help researchers develop novel therapeutic interventions or antimicrobials to treat BV.

The study, conducted by the laboratory of Melissa Herbst-Kralovetz, PhD, was published in June in the Journal of Infectious Diseases. An associate professor in the Department of Obstetrics and Gynecology and Basic Medical Sciences, Dr. Herbst-Kralovetz said this is the first study to investigate how Prevotella bacteria function in the upper female reproductive tract and how they may relate to BV infections, which affect 10-30% of women in developed nations, including the United States.

Associated with an imbalance of “good” and “bad” bacteria in vaginal microflora, BV is an infection – the most common vaginal disorder of premenopausal women – that causes an abnormal discharge and/or odor in about half of sufferers. Although  symptoms may be similar, it is  not the same as a yeast infection, which – unlike BV – also causes itching and burning. BV, which can be asymptomatic, is associated with a two-fold increase in risk of preclinical pregnacy loss and can cause an increased risk of miscarriages, preterm birth and low birth weight complications, as well as postpartum infections. Treatment for BV involves oral or topical antibiotics, but the condition recurs within a year in more than half of women affected.

Prevotella are a group of bacteria found in the mouth, gut, respiratory tract and vagina. Sequencing techniques and microbiome studies conducted by the Dr. Herbst-Kralovetz lab and others have identified many different Prevotella species, including those associated with the vaginal microbiome and BV. These Prevotella species include P. bivia, P. timonensis, P. disiens, etc., as prominent members of the bacterial communities of women with BV.

Dr. Herbst-Kralovetz said her research team sought  to investigate whether  all of these bacteria have similar functions and their interaction with endometrial epithelial cells, or cells in the lining of the uterus, known as the endometrium. 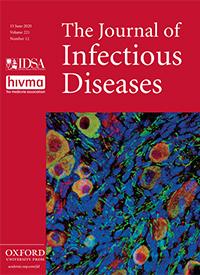 “We found that these bacteria do not all behave the same,” she said. “They have unique functions. These Prevotella are diverse and interact with a human 3D model of endometrial epithelial cells in a species-specific manner.”

In this work, researchers used a 3D human cell model that exhibits barrier features and immune response similar to human cells found in the lining of the uterus and colonized the model with a range of Prevotella species. “Using bioinformatics to inform experiments, we were able to target species-specific mechanisms of Prevotella on host endometrial epithelium,” said Zehra Esra Ilhan, PhD, a former postdoctoral researcher in the Herbst-Kralovetz lab and first author on the published paper. Dr. Ilhan is now a postdoctoral researcher at the INRAE (French National Institute for Agriculture, Food and Environment) in Paris.

Their results showed that Prevotella species behaved uniquely and induced changes to the quality or state of cells in the epithelium, which are cells that cover the surface of the body and line internal organs. For example, P. disiens, which has severe cell toxicity levels, indicated presence of species with high pathogenic potential within the Prevotella genus.

They found that P. timonesis had high levels of sialidase activity, i.e., regarding enzymes which enhance the ability of microorganisms to invade and destroy tissue. The sialidase activity regulates membrane-associated mucins, whose primary functions are to hydrate, protect, and lubricate the epithelial surfaces within the human body. This plays a critical role in endometrial epithelial barrier function, which prevents the invasion of pathogenic bacteria in the host, and highlights a potential role for Prevotella species in assisting secondary colonizers to ascend to the upper female reproductive tract.

Dr. Herbst-Kralovetz said that the more they understand about vaginal bacteria and how they impact the female reproductive tract, the better we can intervene and develop novel interventions or antimicrobial treatment remedies.

“We know very little about the function of these Prevotella members,” Dr. Herbst-Kralovetz said. “Therefore, the motivation for this work stems from a lack of overall understanding of the functional impact of these common bacteria in the female reproductive tract. In addition, these bacteria may ascend to the upper female reproductive tract, so it is important to study these bacteria and determine their function with cells, molecules and tissue in the uterus.”

Because much still is unknown about the function of bacteria associated with BV, this research is helping scientists and the medical community shed light on the diversity of functions even within a particular subtype of bacteria. “Not all Prevotella are created equal, they have different numbers of genes, which relate to their unique functions and role in disease progression,” Dr. Herbst-Kralovetz said.

Researchers hope this new information will provide better insight into the the function of these bacteria and their involvement in promoting other gynecologic and obstetric disorders that impact women’s health.

A photo gallery associated with this story can be found on the UArizona Health Sciences Connect website.

About the UArizona College of Medicine – Phoenix
Founded in 2007, the University of Arizona College of Medicine – Phoenix inspires and trains exemplary physicians, scientists and leaders to optimize health and health care in Arizona and beyond. By cultivating collaborative research locally and globally, the college accelerates discovery in a number of critical areas — including cancer, stroke, traumatic brain injury and cardiovascular disease. Championed as a student-centric campus, the college has graduated 500 physicians, all of whom received exceptional training from nine clinical partners and 1,800 diverse faculty members. As the anchor to the Phoenix Biomedical Campus, which is projected to have an economic impact of $3.1 billion by 2025, the college prides itself on engaging with the community, fostering education, inclusion, access and advocacy. For more information, please visit phoenixmed.arizona.edu (Follow us: Facebook | Twitter | YouTube | LinkedIn | Instagram).