An aspiring physician in the College of Medicine – Phoenix hopes to draw upon her personal experiences to change the way patients receive care.
November 22, 2022 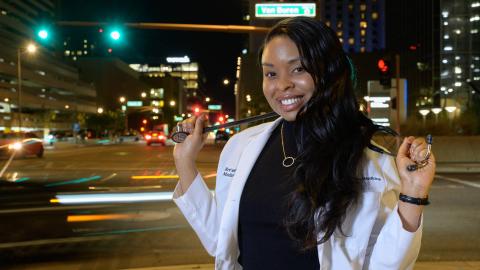 Bre'anca Sanders, a first-year student in the College of Medicine – Phoenix, strives to become part of the solution to deliver better health care for underserved and underrepresented patients in urban areas.

Expectant mother Bre’anca Sanders drove to Koreatown, one of the most diverse neighborhoods in downtown Los Angeles, turned down an alley into a tiny parking lot and walked into a free clinic from the backside of the building. She checked in and sat down in the prenatal waiting room, where she waited for hours.

It was Sanders’ first experience with health care in an urban setting.

"I would have to clear my schedule for the whole day," Sanders recalled. "I could be waiting in the clinic for three to five hours, despite having an appointment. I would look around the room and see the burden this was putting on a lot of the other women, especially those that could be losing wages or risking their employment due to the inconsistent appointment durations." 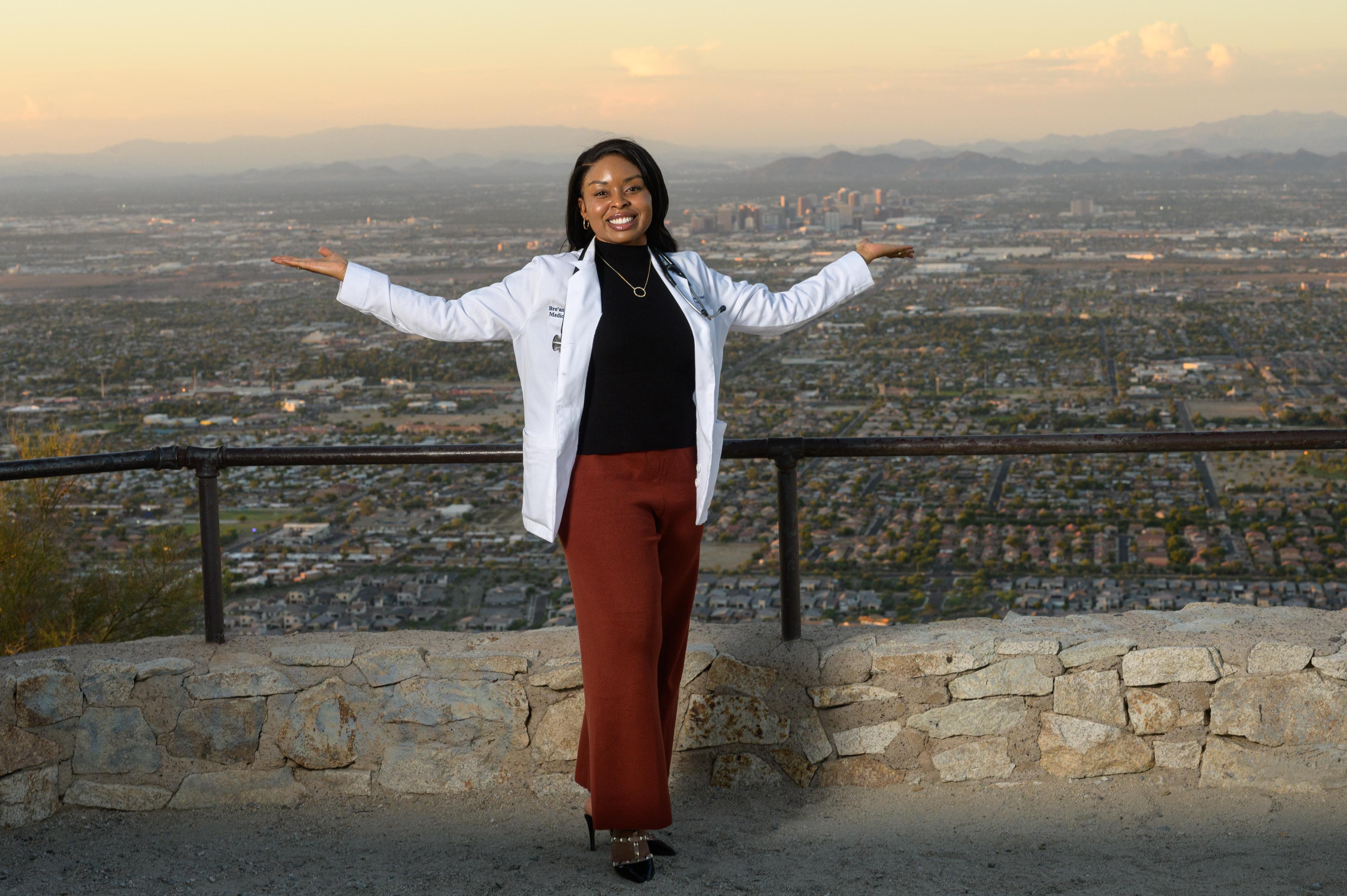 A self-described “military brat,” Sanders was used to the comprehensive coverage provided by TRICARE, a health care program of the U.S. Department of Defense Military Health System. But while living on her own as an expecting mother, she decided to go on Medicaid to lower her out-of-pocket costs.

“There was only one physician for prenatal care and one for pediatrics,” Sanders said. “I know there was only so much each of them could do. That experience showed me there needs to be more physicians in urban areas.”

Sanders gave birth to a daughter, Londyn, and now, five years later, is on her way to becoming a physician.

Sanders is one of 27 new recipients of the University of Arizona Health Sciences Primary Care Physician Scholarship. The program addresses two critical issues in health care: Arizona’s shortage of primary care physicians and a rising amount of debt for medical students. The scholarships help students in the UArizona College of Medicine – Tucson and the UArizona College of Medicine – Phoenix pursue careers in primary care without worrying about how they will repay medical school debt. 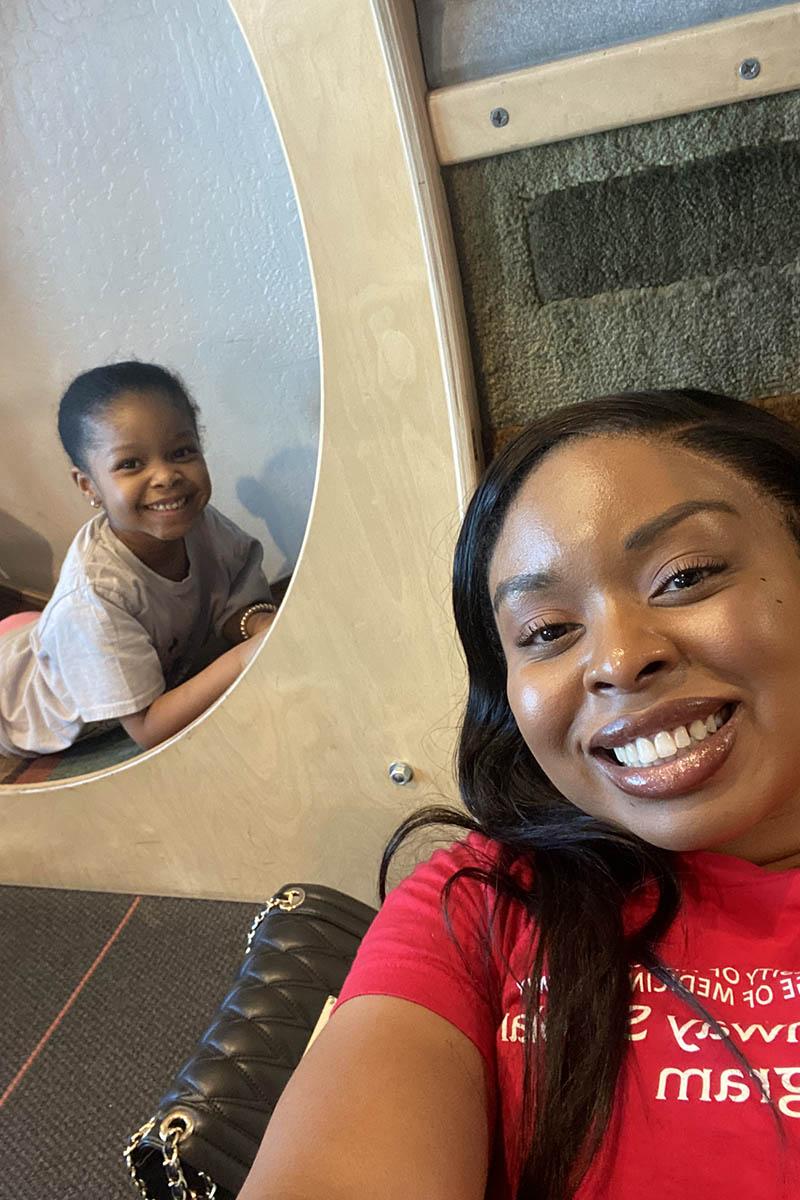 Sanders’ experience of waiting for hours to get seen by a physician is not unique. In fact, for many Americans, simply scheduling a doctor’s appointment is becoming harder each year.

In September, Forbes reported on a Merritt Hawkins study of commonly used specialty physicians in 15 major U.S. cities. The study found that patients were waiting an average of 26 days for a scheduled appointment with a doctor, an increase from 24 days five years ago and 21 days in 2004.

Long wait times are one of many detrimental consequences of the growing shortage of physicians.

A June 2021 policy brief from the UArizona Center for Rural Health stated that Arizona has a shortage of 560 primary care physicians and will require an additional 1,941 by 2030 due to population increases, higher rates of chronic disease and aging. As of February 2022, Arizona ranked No. 43 out of 50 states for physicians per capita.

Though she was born in Tacoma, Washington, Sanders is no stranger to big cities. Growing up in a military family meant moving a lot, and by the time she graduated from high school in Illinois, she had lived in five states. College took her to California and to France one spring to study abroad. She moved to Arizona after Londyn was born to begin pursuing a career in medicine.

“I have witnessed firsthand an imbalance between health needs and resources, especially for underrepresented populations in medicine.”
Bre’anca Sanders

“Living in cities like Chicago, Los Angeles and now Phoenix, I have witnessed firsthand an imbalance between health needs and resources, especially for underrepresented populations in medicine,” Sanders said. “Limited access to quality food options, low socioeconomic conditions and a lack of health care providers is a pattern in these cities.”

Prior to getting accepted to the College of Medicine – Phoenix, Sanders worked as a front desk assistant in a downtown Phoenix family medicine office. Most of the patients she encountered were Black or Latino. Many were middle-aged and struggling to manage high blood pressure, diabetes or kidney disease.

“Many of these conditions are preventable or treatable,” Sanders said. “But the patients don’t seek care early enough, can’t afford it, or, in some cases, they don’t know what they could be doing to prevent their condition in the first place.”

A curiosity for science

Becoming a physician has long been a goal for Sanders, who has no shortage of experience with health concerns in her family. 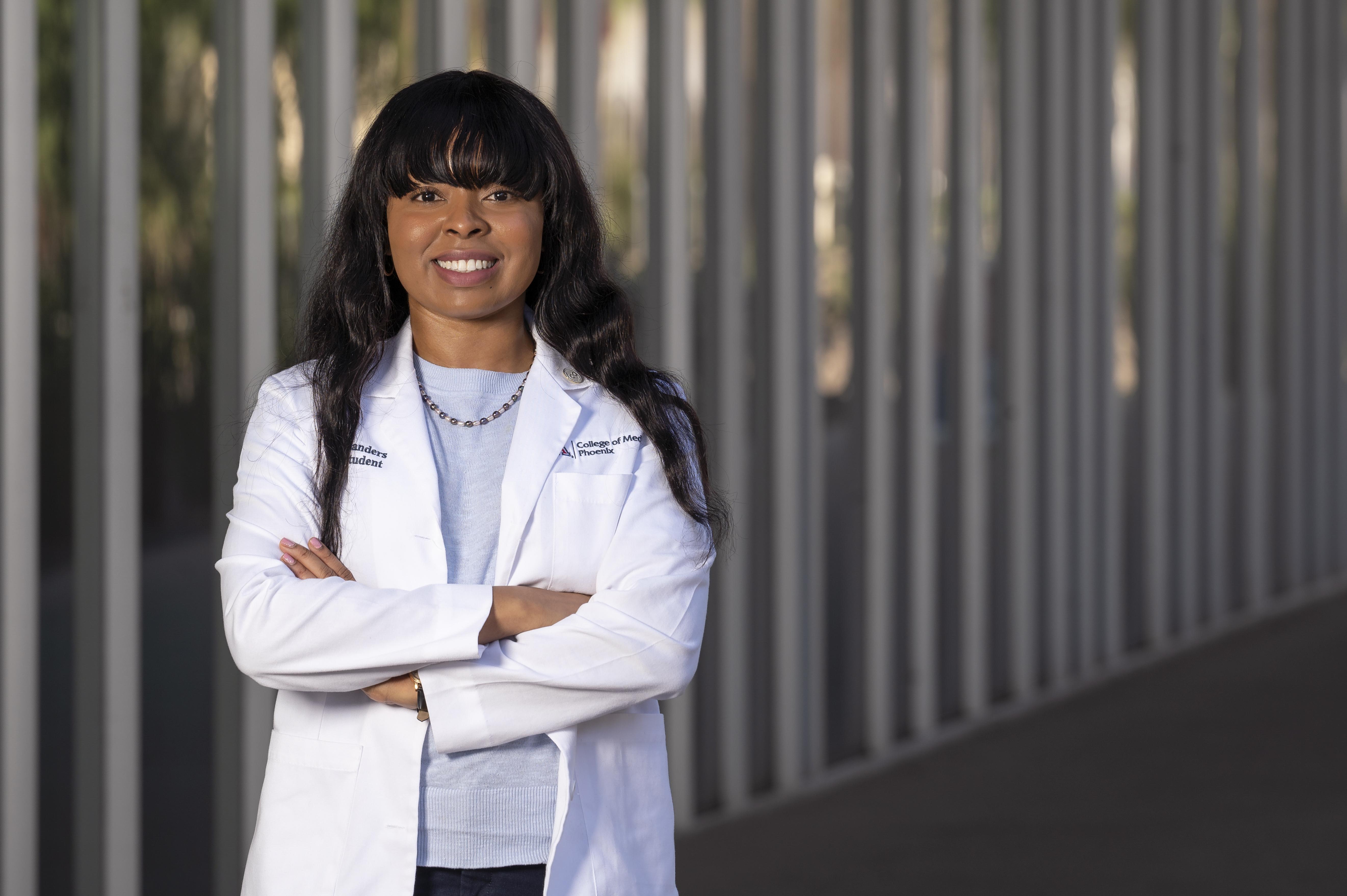 An honors student in high school, Sanders found herself dozing off in class and noticed she was not feeling like herself. She became concerned enough to see a doctor, who brushed aside her concerns. But Sanders knew something was not right. She implored her mom to take her back.

Doctors eventually diagnosed Sanders with hypothyroidism, a condition in which the thyroid gland doesn't produce enough of certain crucial hormones. Unsure what might have caused the condition, they also ordered an MRI.

“It turned out I had a brain tumor,” said Sanders, who no longer has hypothyroidism. “My mom freaked out when she heard the doctor tell me. Fortunately, I never needed surgery, and the tumor is under control. It doesn’t affect me anymore.”

From that experience, Sanders realized two things: the importance of being an advocate for her own health; and her growing passion for science.

“One of the big reasons I was motivated to become a doctor was the science aspect of it,” Sanders said. “I liked the idea of using science to figure out what is going on.” 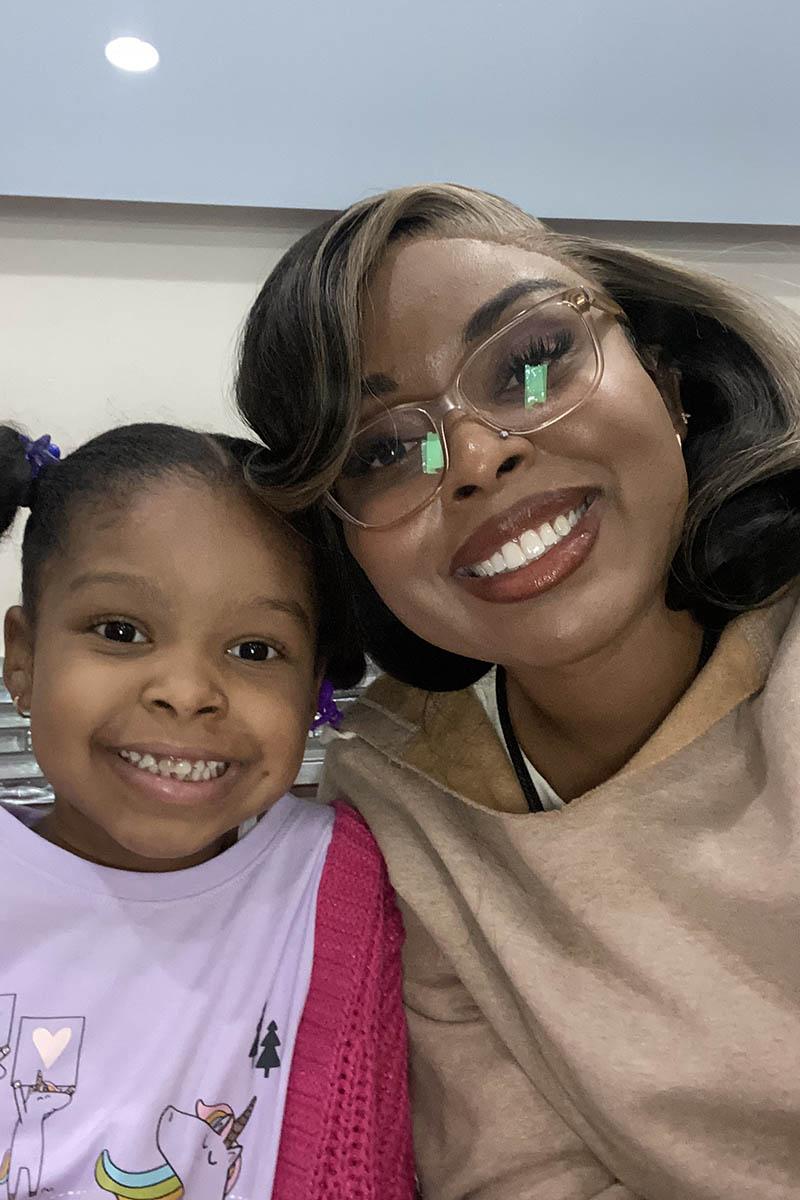 Sanders witnessed other health struggles in her family, too. Her father was diagnosed with colon cancer, a disease his grandmother also had, shortly after his release from prison. Colon cancer is highly preventable with regular screenings, but the warning signs of his cancer were missed before and during his incarceration.

“For too long, his needs were not taken seriously,” Sanders said. “I am committed to changing the accessibility to those who need it most.”

Sanders is hopeful that her personal journey and work experiences will mold her into the type of physician needed in today’s health care setting. Her ultimate goal is to build meaningful relationships with patients from vulnerable communities, essentially shifting the paradigm for inner-city health care.

“My hopes are this scholarship will allow me to become a physician and show Londyn that following your passion pays off,” Sanders said, referring to her daughter. “She aspires to be a scientist, so I want to emulate a positive journey for her.”