Whether tweeting, podcasting or lecturing about sleep, insomnia and related disorders, the behavioral scientist sees success in a good night’s rest.
August 4, 2022 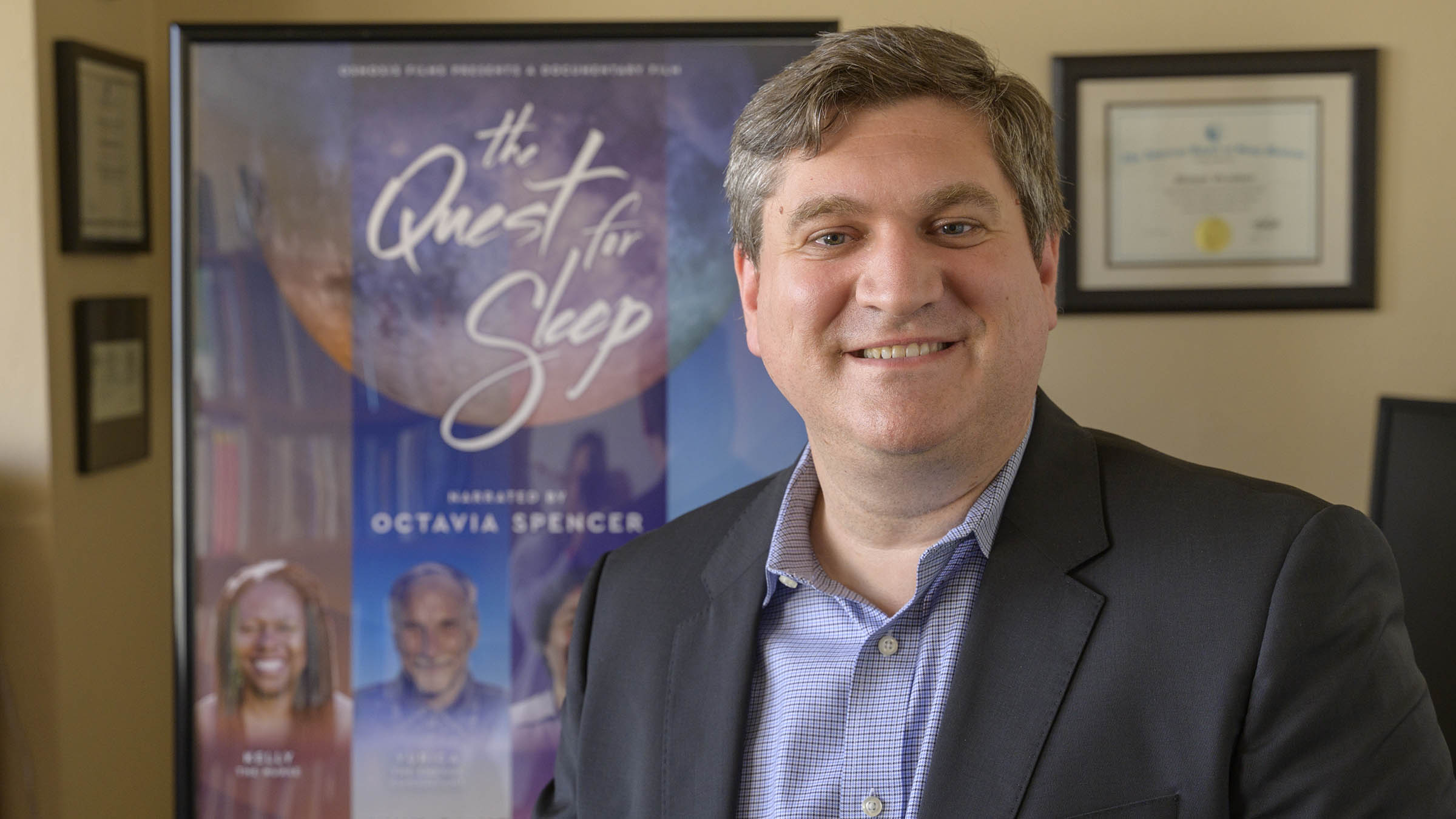 Michael Grandner, PhD, MTR, a UArizona psychologist and behavioral scientist on sleep health, is featured in a documentary, “The Quest for Sleep,” which can be seen Aug. 21 at The Loft Cinema in Tucson.

Michael Grandner, PhD, MTR, director of the Sleep and Health Research Program in the Department of Psychiatry at the University of Arizona College of Medicine – Tucson, is a social media juggernaut when it comes to healthy sleep and the behaviors behind sleep disorders. 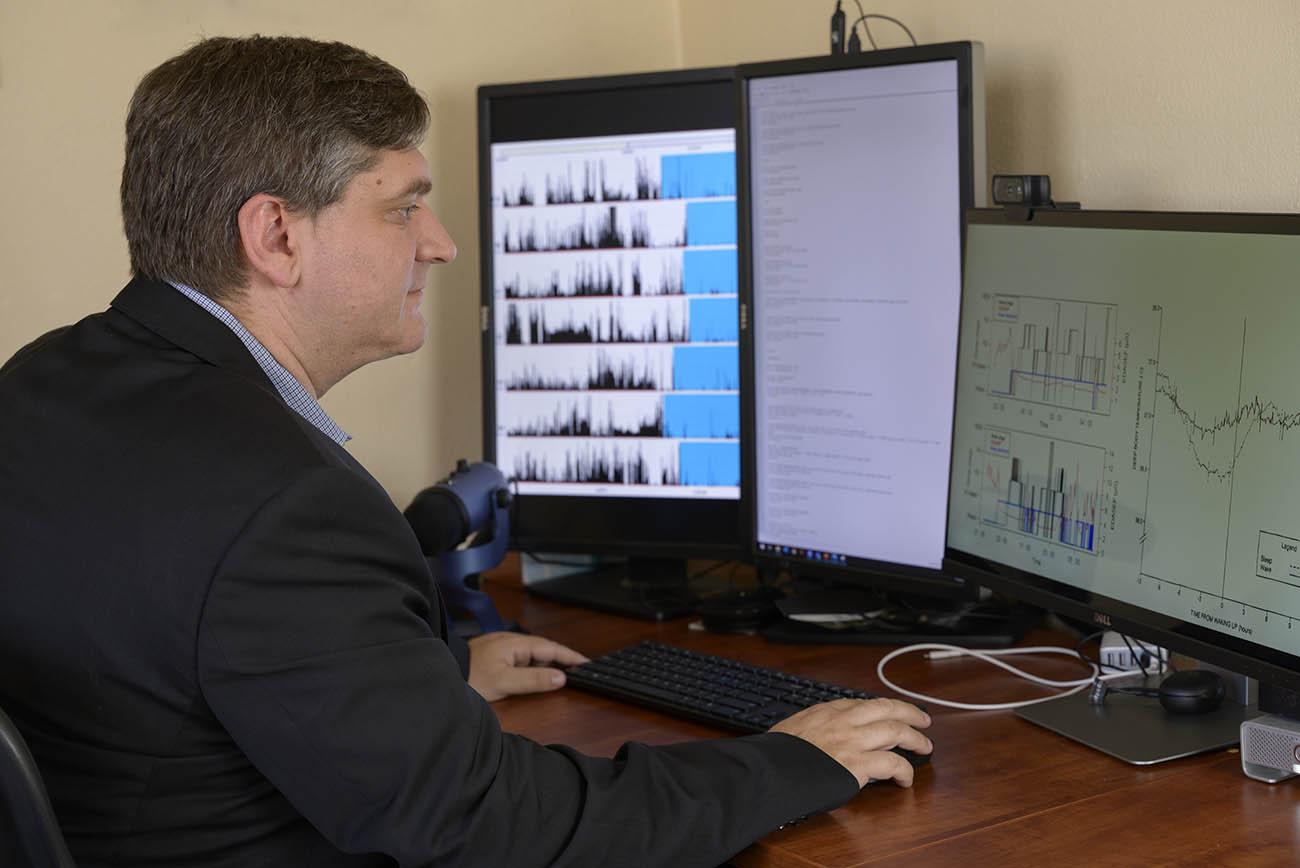 His online profile, cultivated largely on Twitter, caught the attention of producers who were filming a documentary on sleep.  Dr. Grandner is featured in “The Quest for Sleep,” which will be screened at The Loft Cinema in Tucson on Aug. 21.

Social media use before bedtime can be one reason people lose sleep. Dr. Grandner knows moderation is key.

“Social media isn’t there to calm you,” he said. “It’s there to sell you stuff, distract you and keep you engaged. What often happens is people get all worked up and mentally engaged, where they then have to detach and wind down. That mental activation becomes as much a barrier to sleep, or more, as light. And distraction in itself causes a lost sense of the passage of time.”

Fear of missing out

Fear of missing out, or FOMO, can  drive social media engagement and often leads to excess screen time that contributes to poor sleep. That’s due to artificial light from electronic devices, mental activation and a lost sense of time that screens engender.

“You should not look at sleep as a cost of time. You should see your sleep as your commute to tomorrow.”
Michael Grandner, PhD, MTR

Pace yourself, and set limits on how much time you’ll spend online and when you’ll stop, said Dr. Grandner, who is an associate professor, BIO5 Institute member and director of the Behavioral Sleep Medicine Clinic at Banner – University Medical Center Tucson. Ironically, some smart phones track and inform you of your screen time, allowing you to do just that. Fitness watches that connect to your phone will allow you to track the quality of your sleep.

Even so, Dr. Grandner says, he struggles with screen-time limits for his two sons, ages 13 and 10.

“They’re both pretty good sleepers,” he said. “But that’s because they know what to do. In our house, there are rules around sleep. We have a routine. We turn the lights down at a certain time. Sneaking screens is a perennial battle, but that’s their generation. For me, the only time we could sneak screens was Saturday morning for cartoons.”

Dr. Grandner was born in New York City and as a child moved to Pine Valley, a rural hamlet near Ithaca, south of New York’s Finger Lakes area. The experience of moving from the multicultural melting pot of the city to the country, where his family bought a house next to a dairy farm, broadened his perspective and enhanced his insights as a psychologist, he said.  His career in sleep health began as a fascination with dreams in high school.

“I got very interested in dreams as a way to understand things we can’t understand when we’re awake. I would read books on dream interpretation, which got me into knowing a little bit about sleep science. The idea of that as a career, though, was not even on my radar yet.”

Dr. Grandner, who played piano and guitar, initially wanted to major in music composition at the University of Rochester but switched to psychology his sophomore year. Then, a classmate got a job as a tech in a sleep lab at the medical school.

He signed up for a class on sleep and dreams with Michael Perlis, PhD, a behavioral specialist in sleep health who became one of his mentors and “one of the biggest names in the field of insomnia research.” A UArizona graduate, Dr. Perlis studied in Tucson under Dick Bootzin, PhD, a psychologist and renowned pioneer in sleep and sleep disorders research. Dr. Bootzin, along with Stuart Quan, MD, a former UArizona pulmonologist and professor emeritus who’s now the Gerald E. McGinnis Professor of Sleep Medicine at Harvard Medical School, established UArizona as a powerhouse in sleep health research.

Dr. Grandner worked in Dr. Perlis’ lab prior to graduating, then did his master’s and doctoral work in psychology at San Diego State University and University of California San Diego. He reconnected with Dr. Perlis as a postdoctoral researcher at the University of Pennsylvania. There, Dr. Grandner earned a second master’s degree, this one in translational research, under Allan Pack, MBChB, PhD, who launched the country’s first division of sleep medicine and grew it to become one of the largest sleep research programs in the world. Dr. Perlis arrived at Penn the same year, and he and Dr. Grandner remain collaborators today.

“This is where my connections to UArizona started,” Dr. Grandner said. The other connection – his wife is from southern Arizona – made it natural for him to apply at UArizona when looking for a faculty position in 2015.

Sleep and the pandemic

When it comes to sleep during the COVID-19 pandemic, Dr. Grandner said the biggest impact came at the start, when most people stayed up later – and woke up later – during lockdowns. Schedule disruptions and less natural light exposure threw off many people’s circadian rhythms, affecting their sleep. Flexible time, work-from-home and hybrid schedules allowed people more sleep time that otherwise would go to the morning office commute, he added. 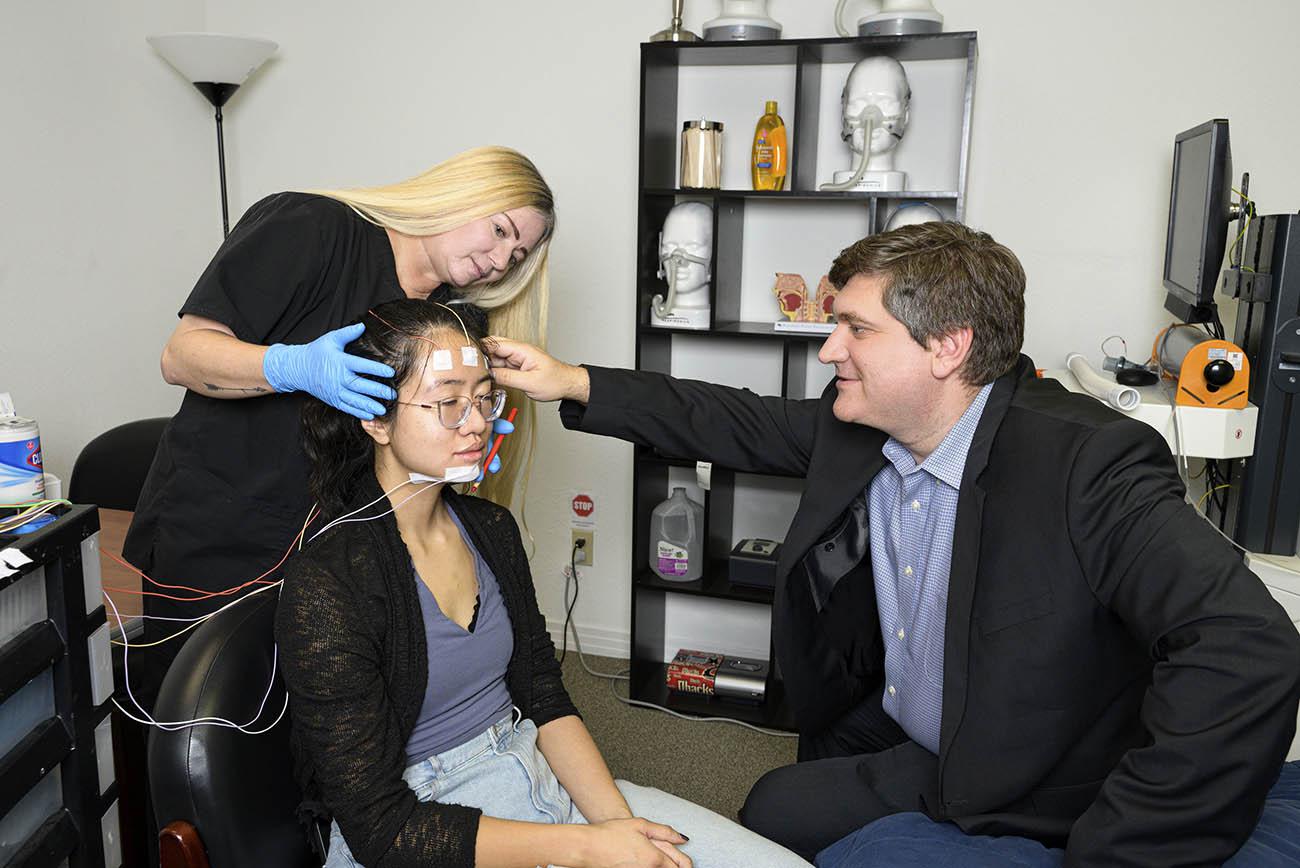 “We’ve found people can do all kinds of things remotely and more flexibly. And that way, we can protect natural sleep patterns,” Dr. Grandner said, referring to related American Academy of Sleep Medicine- and Centers for Disease Control and Prevention-funded research he participated in. “Some people commute a long time in the morning and some don’t have to, and being flexible about some of these things is great.”

Many sleep issues, which are often tied to ongoing, persistent health issues, could be overcome by better sleep routines and sleep plans, he said.

“People think about going to bed as, ‘How much time do I have left in my day to devote to sleep before tomorrow? How much do I have left to do to be able to put everything down so I can be done?’ And that is the wrong way to look at it,” Dr. Grandner said. “You should not look at sleep as a cost of time. You should see your sleep as your commute to tomorrow. We should be thinking of sleep as an investment in our performance the next day.”

And, he added, remember to relax. Take a deep breath. Exhale.

“Nobody got to sleep faster by trying harder.”

Exploring Insomnia and Our Relationship to Sleep

For additional event details, visit the Department of Psychiatry website or email Jamie Manser at jlmanser@psychiatry.arizona.edu.